Punjab and Haryana's laws to protect groundwater led to a change in cropping patterns and also impacted the region's air pollution load.

Researchers suggest the use of short duration but high yielding varieties of rice to tackle this problem. Photo by Mayank Aggarwal/Mongabay.

Legislations by Haryana and Punjab governments to save groundwater seems to have had an unexpected outcome – an increase in winter time air pollution in northern India, suggests a latest study.

The study done by a team of researchers from India, the United States of America and Mexico was published in the journal Nature Sustainability in June 2019. The researchers used satellite data to understand the implications of “groundwater conservation policies on air quality in northwest India.” According to the study, the “changing patterns of rice production and agricultural burning” facilitate this increase in air pollution.

Haryana and Punjab have the highest yields of rice and wheat in South Asia. Irrigation practices for these crops, however, pose a threat to the region’s groundwater levels that are being fast depleted. This, in turn, could endanger the country’s food security, a situation that triggered laws to reduce dependence on groundwater. In 2009, the Punjab Preservation of Subsoil Water Act and the Haryana Preservation of Subsoil Water Act were passed by the respective state governments.

“Punjab and Haryana governments introduced groundwater legislations in 2009 to prohibit early rice establishment in the season, in an attempt to reduce groundwater usage for irrigation. The legislation pushed back rice planting from May, when farmers were solely dependent on groundwater reserves, to June, in order to bring cultivation closer to the monsoon season,” Balwinder Singh, the first author of the study, told Mongabay-India.

“By delaying the rice planting season, farmers had fewer days between harvesting the rice and planting the next crop, mainly wheat, meaning Indian farmers have been forced to burn their residues within a narrower stretch of time,” explained Singh, who works with the International Maize and Wheat Improvement Center (CIMMYT) in Delhi.

Practised widely across northern Indian states of Punjab, Haryana and Uttar Pradesh, residue burning is a method where farmers burn the rice residues in the field itself to clear it for sowing wheat. It is a debated practice, often held responsible for contributing to the air pollution in northern India.

Despite laws that ban the practice, approximately 23 million tonnes of rice residue is burned annually in Punjab and Haryana, with PM2.5 dominating the pollution load, noted the study.

PM2.5 is one of the deadliest components of air pollution. These fine particles settle deep in lungs and enter bloodstream leading to various respiratory and cardiovascular diseases.

The consequent pollution is also seen in the air quality of nearby areas like the capital New Delhi where, the study stated, rice crop residue burning from Punjab and Haryana contributes 25–70 percent of the PM2.5 pollution in Delhi.

The link between rice plantation and air pollution

The study revealed that for the six rice seasons before the groundwater acts were passed (2003-2008), plantation was done on an average of 86% of the rice area in Punjab and Haryana, on or before June 28 (the time when monsoon usually reaches Haryana). In the years following the 2009 acts – which prohibited planting before June 20 – less than 40% of the rice area was planted on or before June 28, indicating the influence of the acts on the plantation schedule. 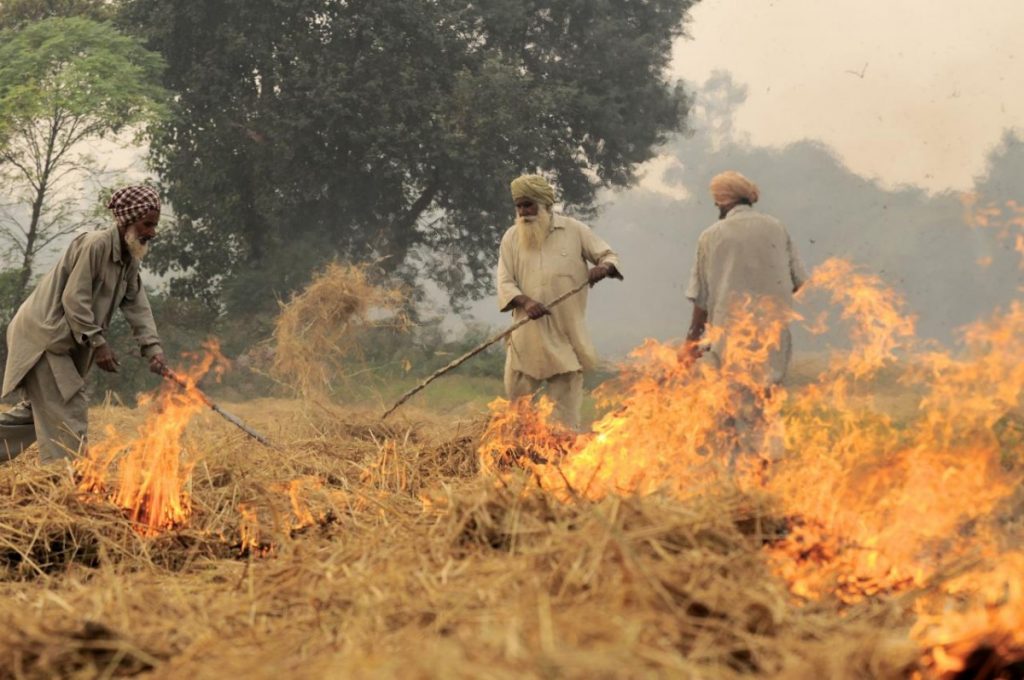 With a delay mandated for plantation of rice, rice harvest and the following residue burning has also shifted accordingly. “Before 2009, approximately 40 percent of the rice crop in Punjab was harvested by October 26, but thereafter this declined to 14 percent,” the study said.

And while the residue burning declined in the last fortnight of October, it significantly increased in the first three weeks of November, noted the study. “Before the acts, the maximum occurrence was on October 24 at 490 fires per day. After the implementation of the acts, this increased to 681 fires per day, peaking around November 4,” it added.

Singh explained that their study revealed that “with more of these farmers setting fire to their plant waste together, peak fire intensity increased by 39 percent, contributing significantly more to atmospheric pollution than had it been more spread out.”

The increase in intensity with the shift in the burning period was further aggravated by the fact that in the first fortnight of November, temperatures in New Delhi are three degree Celsius lower and winds are weaker compared with the second fortnight of October. “These conditions favour atmospheric stability and discourage the dispersion of air pollution,” noted the study.

Studying these pollution levels alongside the groundwater acts, the study deduced that “average daily Particulate Matter 2.5 concentrations in November were 29% higher after the groundwater acts. In relative and absolute terms, the increase in November was significantly higher than in any other month, suggesting that agricultural fires rather than temporal emission trends from other economic sectors are principally responsible for deteriorating air quality following the monsoon,” it said.

Additionally, the study noted that in the period after the implementation of the groundwater acts, the total rice area had also increased by 10% and aggregate rice production by 11%, which indicated that there would be more residue for burning and as a result, an increase in the pollution load from burning.

Over the last ten years, the northern Indian region including the Delhi-National Capital Region has gained worldwide notoriety for being one of the most highly polluted regions across the globe. Due to geography and meteorological reasons, the air pollution due to residue burning in Punjab and Haryana travels towards Delhi and its adjoining regions.

After a series of court orders and intense public pressure, the central government had come out with a National Clean Air Plan Programme in January 2019 but it was criticised for lacking teeth to ensure compliance.

During October-November, the start of the winter season, the national capital region routinely suffers from hazardous levels of air quality for several days. Various studies have estimated that every year over a million people die due to air pollution in the country. In Delhi, such high levels of pollution have led to a reduction in life expectancy by several years.

The study emphasised that there are no simple solutions at the “nexus of food security, resource depletion and environmental quality” but some techniques can be adopted.

“There is not much flexibility in transplanting rice earlier as transplanting window already fixed by governments (transplanting only after June 15). However, the governments should instead promote rice varieties that either take less time to grow or are less water-intensive, promote irrigation water-saving technologies or less water demanding crops such as maize. This could help alleviate groundwater losses whilst reducing the damaging concentration of agricultural burning,” Singh suggested. 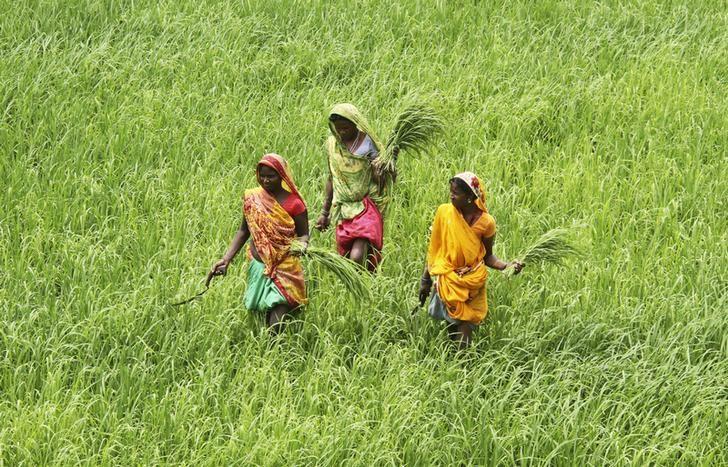 “Another sensible approach would be embracing technologies that provide farmers the means to avoid stubble burning. Happy Seeder, for instance, is a drill that plants seeds by clearing the loose straw that would usually get burned by farmers, ruling out the need to burn residues,” he added.

It stressed that energy production and other off-farm uses for crop residues are also probable candidates to provide part of the solution.

“New approaches to water conservation are emerging that, if appropriately incentivised through measures such as full pricing of energy, would probably reduce the policy imperatives to prohibit earlier rice establishment,” said the study.

In 2018, the Central government had launched a scheme on ‘Promotion of agricultural mechanisation for in-situ management of crop residue in the states of Punjab, Haryana, Uttar Pradesh and Delhi’ with a budget of Rs. 11.5 billion (Rs 1,151.80 crore).

“If these policies are changed because tradeoffs cannot be resolved, companion efforts will be needed to facilitate sustainable intensification in areas such as the eastern Gangetic plain, where water resources are relatively abundant and closer coupling of crop-livestock systems provides a diverse set of end uses for crop residues,” the study said.

“What we need is to find practical solutions for crop residue burning which either ensures additional income or it provides employment to others so that farmers can be encouraged to adopt them. The other thing is that rice as a crop was not a natural choice in Punjab, it was brought to Punjab during the green revolution. Farmers are ready to shift to other crops or even growing vegetables if authorities ensure that those will be procured. But, the government is not ready to help farmers,” Lachhman Singh, who is the general secretary of Punjab’s Khet Mazdoor Sangh, a farm labour collective, told Mongabay-India.

“The farmer who burns the residue in his field is the one who suffers the most from the pollution. If the government is serious there are enough solutions to this issue but it is not interested in addressing the root cause of the problem,” said Singh.