'The LDAR ignores a scientific understanding of Lakshadweep’s unique geography, ecology and culture, which place clear limits on the developmental possibilities on island, lagoon and reef.' New Delhi: On June 23, a group of researchers and experts penned a letter and analysis of the changes proposed in the Indian government’s draft Lakshadweep Development Authority Regulation 2021, addressed to the President of India. It is reproduced in full below.

Hon’ble Shri Ram Nath Kovind
The President of the Republic of India
June 23, 2021

The proposed Lakshadweep Town and Country Planning Regulation, also being referred to as the draft Lakshadweep Development Authority Regulation of 2021 (henceforth LDAR), is highly problematic and, should it become law, will work against existing legal provisions that safeguard the resilience of Lakshadweep’s ecology, livelihood and culture. It is at odds with the inherent ecological fragility and cultural uniqueness of Lakshadweep, and has been put together with scant regard for its implications for Lakshadweep’s environment and people. As India’s smallest Union Territory and our only atoll system, Lakshadweep holds a special place in the Indian union. Yet, its unique geography, underlying ecology and long human history place natural limits on the kinds of development the archipelago can support.

As a collective of concerned scientists who have conducted research in Lakshadweep for many years, and citizens who care deeply for the survival and well-being of Lakshadweep’s people and ecosystems, we respectfully request you to intervene to withdraw this draft and request a serious re-evaluation of the developmental paradigms currently being promoted for the archipelago, under your constitutional powers and duties to ensure peace, progress and good governance for Lakshadweep.

Our principal concerns, which we detail in this letter and appendices that follow, include the following:

i. The LDAR ignores a scientific understanding of Lakshadweep’s unique geography, ecology and culture, which place clear limits on the developmental possibilities on island, lagoon and reef, already constrained by climate change.

ii. Local livelihoods and wellbeing are embedded in current land use and ocean practices and environmental stewardship which the provisions of LDAR will endanger. The draft has been formulated without consulting local communities of these consequences.

iii. The LDAR violates several existing regulations as well as international commitments that protect the ecological integrity of the islands and ensure sustainable development across this fragile archipelago.

iv. In its spirit, the LDAR embraces a questionable vision of development that is neither sustainable in design nor likely to improve local wellbeing, or safeguard the future habitability of the archipelago. Lakshadweep is home to 70,000+ people, who have lived here for around 1500 years. Population densities are among the highest in the country, and basic land and water resources are extremely limiting. Between these pressures and the rising threat of climate change, the archipelago and its people face serious existential threats (see Annexures 1 and 2). As mid-oceanic coral atolls, Lakshadweep depends completely on the health of its surrounding reefs; the living coral framework and the lagoon it encloses, together buffer the islands from waves, storms, land loss and saline ingress into groundwater. However, over the last two decades, Lakshadweep has experienced catastrophic climate change-related coral mass mortality events, straining the accretion and buffer capacity of the reefs. Some reefs, including the capital, Kavaratti, are already eroding more than they are growing. Added to this, the increasing trend of commercial reef fishing is undermining the natural ability of reefs to recover from disturbance events. Of particular concern are lagoons, which are impacted by land-based pollution, boat traffic, dredging, and seagrass meadow decline. Lagoons are vital to both populated and unpopulated atolls as critical resource areas and as reef insurance sites for climate resilience. Unless urgent action is taken now to reverse these trajectories, scientific studies conclude that between reef decline, sea level rise, land loss, cyclones, and declining freshwater, the majority of low-lying atolls like Lakshadweep will become unlivable by mid-century. The plans for development the LDAR proposes are strangely unheeding of these self-evident realities. Any further large-scale infrastructural development will have an ecological and social footprint much too large for these islands, lagoons and reefs to sustain and potentially accelerate the rates of decline.

The proposed legislation is in direct conflict with the rights of local people to land, livelihood and healthy ecosystems. Lakshadweep society is organised around its limited land and freshwater resources on the one hand, and its vast ocean resources on the other. Coconut products and pelagic tuna are the mainstays of Lakshadweep’s economy. Importantly, these activities work within sustainable limits of land use, water use and fisheries production. To be successful, these activities need access to land for coconuts, beach area to process tuna and copra, and freshwater. The lagoon forms a natural extension of the land, and supports several critical ecological goods and services. This is true for uninhabited atolls as well; they are places of active tenure, used for cultivation, fishing and fish processing. The lagoon and beach are vital social spaces for all sections of Lakshadweep society, including women, children and the elderly. By granting authorities unqualified rights to appropriate land, beach and lagoon resources, the LDAR acts directly against the livelihood interests of local communities and jeopardises a way of life, and an entire economy.

The proposed regulation imperils India’s international commitments in meeting SDG goals, the CBD convention, CMS convention, UN Framework convention on Climate Change, among others. It also works against India’s own laws like the Land Acquisition, Rehabilitation and Resettlement Act, 2013, the Biological Diversity Act 2002, The Environment (Protection) Act, 1986, the Ecotourism Guidelines 2019 among others. Of greater concern, the proposed LDAR ignores existing regulations from Lakshadweep itself. These regulations explicitly acknowledge the unique vulnerability of Lakshadweep and her communities, and take special pains to ensure that the boundary conditions established by Lakshadweep’s ecology are not breached by unsustainable development. We acknowledge in particular the recommendations of the Justice Raveendran Committee Report of 2014 which were incorporated in the subsequent IIMPs as approved and notified by the Ministry of Environment and Forests, in its NotificationNo.19011/16/91-IA.III dated 23 October 2015, and the Lakshadweep Panchayats Regulation 1994 in this regard. Together they provide a comprehensive existing framework for holistic development whose benefits accrue to local communities while securing ecological integrity, and ensure decentralised development decision-making. We believe that the legal authority and vision of these regulations should prevail over the socially disruptive and ecologically dangerous provisions of the proposed LDAR. 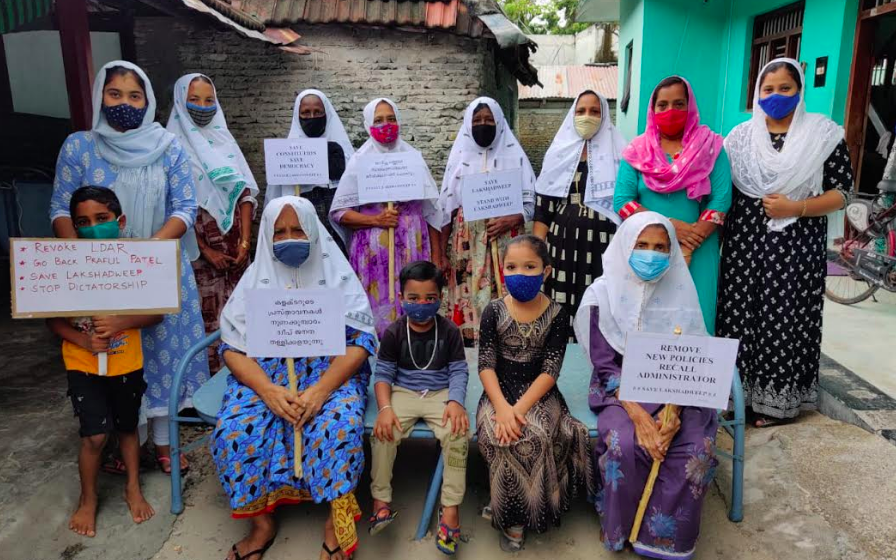 Women and children from Lakshadweep pose during the protest called by Save Lakshadweep Forum, on June 07, 2021. Photo: By arrangement.

Rashtrapati ji, Lakshadweep stands today as a beacon of social cohesion, wellbeing and national integration. By nearly every reliable metric of societal wellbeing – literacy, health, crime rate, income inequality, gender ratio, population growth rate, sanitation, etc – Lakshadweep either betters the national average or leads it. For every measure that matters for a fulfilled life, Lakshadweep is a fully developed state and a paragon to be emulated by the rest of the country. This enviable status is the result of careful planning, institution building, skill development and wise investment by various governmental and non-governmental institutions and the people of Lakshadweep over several decades. In addition, it is due to local enterprise, social reform and judicious resource use by Lakshadweep society over centuries. Against this reality, the guiding development doctrine implicit in the LDAR and its provisions is deeply problematic. It is based on the conception that, despite seven decades of independence, Lakshadweep is woefully underdeveloped and needs to be fast-tracked on a path of rapid growth. This embraces a narrow interpretation of development that favours investment in physical infrastructure, high-end tourism, market mechanisms and resource exploitation over local rights, societal wellbeing and existing ecological infrastructure.

Local communities of Lakshadweep demonstrate a strong sense of stewardship, strong social cohesion, the ability to self-govern, ability to forfeit short-term personal gains in the larger long-term interests of the community and to resolve conflicts internally. These are considered ideal and critical prerequisites within a community to facilitate not just equitable social development, but more importantly, to facilitate economic development. The LDAR in its current form fails to build on and leverage the inherent strengths of the local community to sustainably manage and use the resources on these islands. Instead, it will deprive them of their rights over land and ocean and undermine the social fabric that binds the community together.

Based on all that we have listed above, Lakshadweep requires a more prudent, less invasive approach to development based on securing and enhancing critical ecological infrastructure of island, lagoon and reef, preparing local institutions adequately for the vicissitudes of climate change. And it should celebrate Lakshadweep as a vital and vibrant contributor to India’s diverse culture and history.

In the light of these concerns, we the undersigned humbly request you to:

I. Intervene to withdraw the incautious draft Lakshadweep Development Authority Regulation of 2021.

II. Restore and reinvigorate the Justice Raveendran Committee recommendations set up by the Hon’ble Supreme Court and ensure that they are robustly implemented and monitored. III. Establish a committee of scientists, policy makers and local representatives to re-evaluate the  broader development plans and directions of which the LDAR is a part, in the context of Lakshadweep’s unique culture, ecological fragility and climate vulnerability.

Lakshadweep needs careful development, but this development needs to be calibrated against the realities of climate change, existing population pressures, cultural sensitivities and basic human rights. Any development in Lakshadweep should aim to strengthen, not weaken existing ecological and social infrastructure that currently work to protect the island and its people.

The accompanying annexures outline our detailed concerns about this proposed legislation against a scientific understanding of Lakshadweep’s social and ecological realities and suggest alternative models of development for this part of the country.