Kuno, India’s Second Home for the Asiatic Lion, Is Ready

The action plan aims to guide the reintroduction program of the Asiatic lions in Kuno in a manner based on science and pro-active management.

A lioness and her cub at Gir. Photo: Ivy Dey/Wikimedia Commons

The words in bold, white, are painted alongside a mural of a lion and lioness, on a sign near the forest guest house in Palpur village inside the Kuno Palpur wildlife sanctuary in the central Indian state of Madhya Pradesh. The guest house overlooks Kuno river and offers a clear glimpse into the heart of the forest and the wildlife of the sanctuary. The sun shines bright on the landscape, welcoming a new day and perhaps the start of a new chapter for the sanctuary.

After more than two decades of roadblocks, the Kuno Palpur wildlife sanctuary is ready as the new home for Asiatic lions, starting with those that are to be relocated from Gujarat’s Gir sanctuary, currently the only home of the Asiatic lions in India. In a recent visit over two days, Mongabay-India witnessed the revamped sanctuary.

The areas of grassland habitat are ready to provide food for the animals that lions prey upon like nilgai (blue bull), chital (spotted deer), sambhar, chinkara. “The grass on the sites of the 24 villages that existed here and have already been relocated outside, as a part of the lion reintroduction program, have grown.  There is no sign of human habitat. The villages have been developed into large grasslands, making the sanctuary almost free from human habitation for the free and flexible movements of lions,” Vijendra Shrivastav, sub-divisional officer, Kuno Palpur (West) Wildlife Sanctuary told Mongabay-India as he spoke about the preparations of the sanctuary to receive lions from Gir wildlife sanctuary in Gujarat.

“We are asking just for two pride of lions that typically includes a male, three to five females and their young cubs. On successful relocation, the family of lions will access the unused habitats and will also increase the seasonal mast availability for wildlife in the sanctuary and diversity.”

It has been 29 years since Kuno Palpur was identified as the site for the relocation of Asiatic lions, from their last habitat in Gujarat, to protect them from extinction. Currently, there are 523 (as per the last census carried out in 2015) lions in Gir and this relocation project was supposed to have been completed by 2020.

The “Action plan for the reintroduction of the Asiatic lions (Panthera leo persica) in Kuno Wildlife Sanctuary – Draft 2016” prepared by the expert committee for translocations of lions from Gir to Kuno Sanctuary observed that the “last free-ranging population of approximately 523 Asiatic lions Panthera leo persica are found in the 22,000 square kilometre of the Gir landscape in Gujarat, western India. Carnivore populations restricted to single sites face a variety of extinction threats from genetic and stochastic environmental factors.” The draft is now under implementation.

Catastrophes such as an epidemic, an unexpected decline in prey, natural calamities or retaliatory killings could result in the extinction of the lion population when they are restricted to single populations, the action plan adds.

Reintroduction of Asiatic lions to an alternative site to ensure their long-term viability has become a major conservation agenda since the late-1950s. Failure of the first attempt of the Asiatic lion reintroduction in India (Chandraprabha Wildlife Sanctuary of Uttar Pradesh) in the 1960s has been ascribed to the lack of an a priori scientific study on lion prey base, habitat requirements, local people’s attitude and a post-release monitoring program, notes the plan.

In the early 1990s, after ecological assessment of some protected areas within the historical range of lions was undertaken, the Wildlife Institute of India (WII) identified Kuno Wildlife Sanctuary (Kuno WLS) in the central Indian state of Madhya Pradesh as the most potential reintroduction site.  Subsequently, between 1996 and 2001, 23 villages were resettled from inside the identified Kuno sanctuary by the Madhya Pradesh Forest Department (MPFD) and an area of about 1,280 square km was demarcated as Kuno wildlife division.

An Asiatic lion resting in the shade. Credit: Wikimedia Commons

A new home for the Asiatic lion is finally materialising

Located in north Madhya Pradesh, Kuno was one of the hunting grounds of the royal families of the region and was notified as a sanctuary in 1981. “The sanctuary is classified under the semi-arid – Gujarat Rajputana biogeographic zone,” a senior forest officer of the Madhya Pradesh’s forest department said.

According to Azad Singh Dabhas, a retired forest officer, “in the 1990s, the Wildlife Institute of India (WII) took up the matter of finding an alternative home for the species and identified Kuno Wildlife Sanctuary as the most suitable site.”

He explained that the idea was that in case of catastrophes such as an endemic, an unexpected decline in prey, natural calamities or retaliatory killings could result in the extinction of threatened species which are restricted to a single site – Gir National Park in Gujarat.

Between 1996 and 2001 the Madhya Pradesh Government relocated 23 villages containing 1,547 families from Kuno Sanctuary in preparation for the new lion population. “Not a single incidence of poaching and human-animal conflict has been reported in the last three years,” said a senior official of the sanctuary.

Though the sanctuary is inhabited by carnivores such as leopard, wolf, jackal, Indian fox and striped hyena, in the last over two decades, the population of chital, sambar, nilgai, chinkara, wild pig, chowsingha, and blackbuck are found in abundance.

According to Atul Chouhan, Kuno Sangharsh Samiti, “The state tourism department is successfully running a three-star hotel located on the Shivpuri Highway. A large number of visitors prefer to stay in the forest guest house, which is located inside the Kuno Reserve and is around 25 kilometres from the Tiktoli, the entry gate to the Kuno Reserve. Round the year more than 2,000 visitors come to Kuno Reserve. And the number of visitors to Kuno is rising up. If, lions are going to be introduced in Kuno Reserve the footfall is certainly going to rise.”

The Samiti, now with about 2,000 members, was formed by like-minded people of Sheopur district in 2009-10 after the Gujarat government refused to share lions. The Samiti, along with the forest dwellers who were shifted from the sanctuary have held protests, submitted memorandums to the government alleging that they sacrificed their ancestral homes and land in a way to provide a safe place for the lions. They demanded that the government should respect their sacrifice and take constructive efforts to introduce lions in Kuno Palpur.

Chouhan wants the government to involve youth of the villages in tourism activities by training them as field guides of the sanctuary.

From the 24 villages, a total of 1,545 families were affected. The villagers were relocated to Karhal tehsil of Sheopur district.

“We have left our ancestral homes, anticipating that we are doing it for a bigger cause by understanding the need of the government to provide a safe place for lions and conversation of our natural heritage. But, what we have received nothing in return. There are no signs of lions being introduced in the Kuno. The government has done injustice with us,” said Kapoor Singh Yadav, a resident of village Naya Paron situated on the Sheopur-Shivpuri State Highway.

Yadav, along with his family members and 50 odd families of village Paron, which was situated inside the Kuno Palpur Sanctuary, shifted to the new location in 2004.

Gujarat’s reluctance to relocate the lions

Gujarat government has been refusing to give lions to Madhya Pradesh alleging that it would not be safe to shift the mighty beast to a state which has failed to protect its own tiger population.

After legal tangles spanning for almost two decades, the apex court finally gave its verdict in April 2013 and explicitly directed the Ministry of Environment, Forests and Climate Change (MoEFCC), Government of India (GoI) to expedite the lion reintroduction in Kuno in compliance with the IUCN guidelines of carnivore reintroduction.

Accordingly, the 2016 draft action plan was developed under the directives of the Additional Director General (Wildlife) to guide a successful lion reintroduction in Kuno. The plan, now under implementation, enlists various ecological, biological, management and social facets in accordance with the IUCN/SSC guidelines to develop a time-bound protocol essential for implementing the reintroduction program. Some management actions recommended in the action plan are concomitant and should continue for long-term, it notes.

A large number of lions wander outside the Gir National Park in the eco-sensitive zone of the Gir Protected Area. In 2018, when the deaths of 23 lions in Gir took place, the Gujarat government maintained it to be a one-off incident. The government allegedly refused to touch and go in deep to dig out the medical analytical cause behind the deaths. After the incident, the Gujarat government launched a Rs 350 crore (Rs 3.5 billion) lion conservation project. The project was reviewed by Gujarat chief minister Vijay Rupani in July 2019, when, during rains visuals of lion frisking in the urban areas of Gir Forest hit social media. 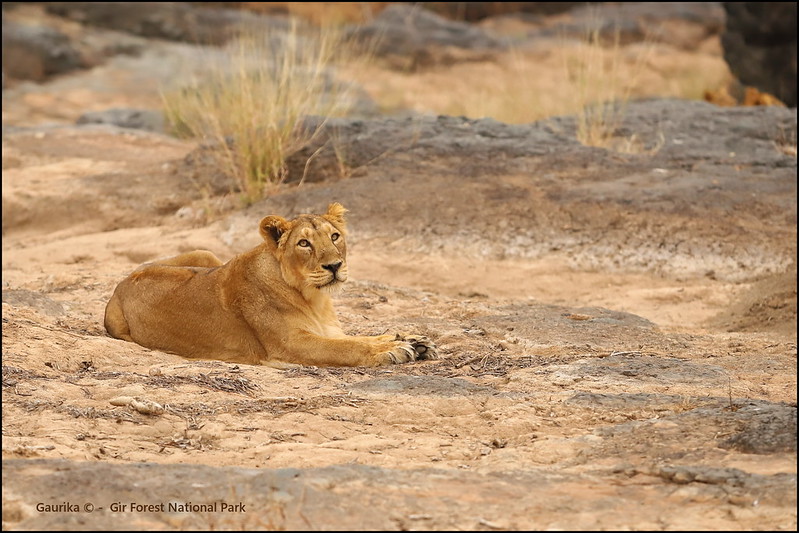 The expert committee has suggested a four-phase plan for the reintroduction of lion in Kuno which involves organisational commitments, ecological monitoring and quantifying social carrying capacity of lion reintroduction, followed by capture, translocation and soft release of lions in Kuno, post-reintroduction monitoring & research, conflict mitigation, followed with an annual review of the project. The first three phases would be undertaken over a period of two years, after which, upto the next 20 years or so the plan highlights genetic management & supplementation, under which six lions (two males and four females) should be supplemented in the Kuno population from Gir until 16-20 years from the first reintroduction at an interval of 4 years.

The report maintains, carnivore reintroduction is an appropriate conservation strategy to restore the integrity of ecosystems. However, many pitfalls exist that can result in the total or partial failure of a reintroduction program and can potentially waste valuable and limited resources.

Population could reach capacity of 80 individuals in 30 years

According to Kuno divisional forest officer, current habitat management initiatives by Madhya Pradesh Forest Department (MPFD) inside Kuno WLS such as weed eradication, fire management, grassland management, waterhole management etc. would continue so as to enhance nutritional carrying capacity for wild ungulates, which would serve as a prey base for the lions

Although the current carrying capacity of lions at Kuno WLS is a maximum of 40 lions, Population Habitat Viability Analysis (PHVA) models for Kuno lions show that the lion population will be viable for long- term only at a minimum figure of around 80 individuals.

Expecting approximately a realised growth that has been observed for recovering tiger populations, along with supplementation every four years from Gir; the lion population in Kuno WLS should reach the current carrying capacity of 40 within 15 years.

To reach the required self-sustaining population size of 80 lions, the time required would be close to 30 years.

This article was first published on Mongabay India.