In Kerala, an Entire Village Uprooted by Landslide

A collapsing hill has destroyed the homes, lives and livelihoods of the residents of Puthumala village in Wayanad district. A scene from Puthumala, where a portion of mountain collapsed. Photo: Aswanth S.M.

Puthumala (Wayanad, Kerala): In Pachakkaadu, where around 80 homes once stood, just ten remain. Pachakkaadu, the Malayalam word for ‘green forest’, is part of Puthumala village of Meppadi grama panchayat, in Wayanad.

On August 8, a collapsing hill resulted in a massive landslide in Puthumala. Residents say there were fewer than 20 casualties. Minor collapses the day before had alerted the residents to move to safer places. However, most houses, farmlands and sources of livelihood in village were severely damaged.

“My parental home and the houses of two of my brothers were destroyed,” said Mujeeb, a resident of the village.

Mujeeb said the losses suffered by his family ran into lakhs of rupees. His brother-in-law Salim said his father Avaran (63) died during the landslide. Avaran was in a car with another man when the landslide occurred. Their bodies are yet to be recovered. 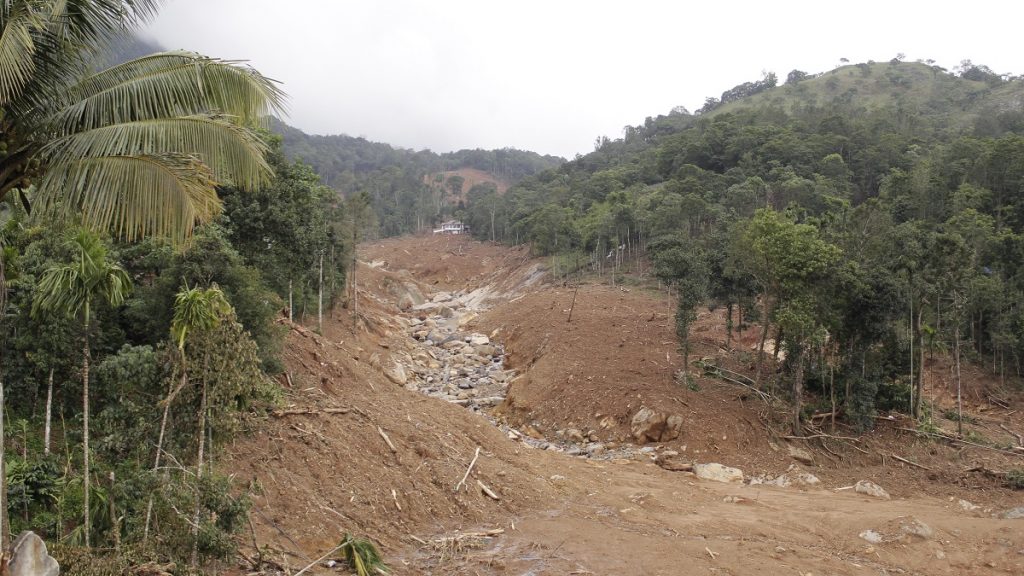 A view of the route of the massive landslide, which hit Puthumala at
Meppadi, in Wayanad. Photo: Aswanth S.M.

When The Wire visited the site on Sunday, locals said the huge swathe of land now filled with debris, mud and rocks, had been their beautiful village, with several houses and places of worship.

Residents of those houses which were partly damaged were salvaging their furniture. “We can’t live here any longer,” they said. They not only fear another landslide, but are also shocked that a majority of their neighbours can never come back to the village.

Villagers said there were minor landslides on the night of August 7, before the bigger one on August 8. On the morning of the landslide, local youth informed the villagers to relocate. Most of them agreed, which eventually helped avoid a huge tragedy. But some didn’t take the warning seriously.

Puthumala is part of the Meppadi panchayat, which has many natural tourist destinations. It is located in the Western ghats, around 20 kilometres away from Kalpetta town, the headquarters of Wayanad district.

The village’s primary livelihood depended on agriculture, with crops such as cardamom, pepper, coffee and tea. These crops added to the beauty of the village.

Some residents also worked as labourers, while some families had relatives working in the Gulf countries as drivers or other low-income jobs. “We lost lives, houses and and livelihoods,” said Hassain (53), another resident of the village. Like many others in the village, Hassain’s family has lived in the village for generations. He makes his living by farming.

His house and two-and-half-acres of cardamom crop was destroyed on August 8, days before he was preparing to celebrate Eid. Hassain said his brother Hamsa also remains missing after the landslide.

Unless the government provides support and rehabilitation, Hassain says it will be extremely difficult for him to recover from the losses. He said a minister from the state government, the district administration and the MP have promised to support the locals. 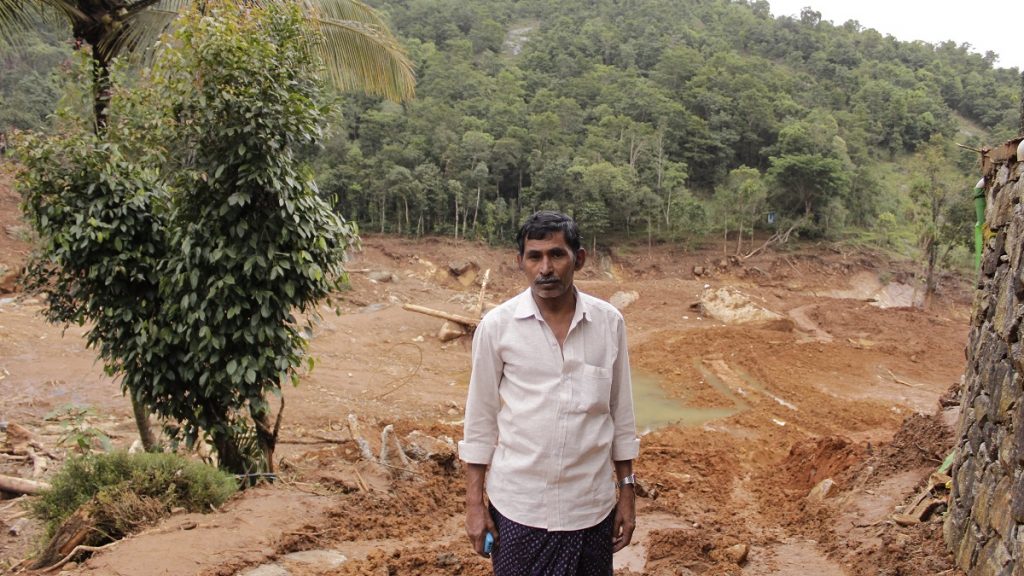 Hassain’s house was destroyed in the landslide and his brother also died. Photo: Aswanth S.M.

Many villagers told The Wire that the government had promised to ensure that they would receive full support to overcome the loss of their houses and livelihoods. Authorities have also promised the villagers will be relocated completely to another place within a year.

“They (authorities) say our grief will be addressed within a year,” Hassain said. He said authorities told residents who were affected by the landslide that they will be rehabilitated within a year. “We were also told that Rs 10,000 will be given as immediate relief,” he said.

Sulaiman (55), another local, said the residents had a meeting with a state government minister, district collector, MLA, village officer, panchayat president and other elected representatives and officials. During the meeting, which was held at Meppadi panchayat office on August 17, the villagers were informed that until their rehabilitation, they would have to live in temporary or rental houses. The local panchayat administration will pay the rent, Sulaiman said.

Sulaiman said minor cracks in the hill would have appeared late on August 7. At around 11:30 pm, he said mud and rocks started falling close to his house. Fearing for their lives, the family left the house at midnight. The next day, other residents were also informed about the incident and were warned of possible landslides as the heavy rain continued. The prediction turned out to be true.

Even though Sulaiman’s house did not suffer severe damaged, it is uninhabitable. Sulaiman also had one acre of land, in which he planted cardamom, pepper and coffee. The landslide destroyed the crops. He has filed a complaint with the government-run Krishi Bhavan.

The Wire also met Bindu, her neighbour Khadeeja and her husband M.K. Bava. After collecting some goods from their damaged houses, they were returning to a relief camp. Khadeeja was saying to her neighbour, “I cried a lot looking at our village. I could not control myself”. Search operations continue at the site, with officials and civilian volunteers struggling to recover bodies. During the last seven days, no bodies were recovered, according to Vijayan, an assistant sub inspector of Kerala police. The Wire spoke to Vijayan at the makeshift police control room set up at the Model Forest Station in Mundakkai at Meppadi Panchayat.

Vijayan said ten bodies were recovered by Sunday morning, with search operations attempting to find at least eight more. Around 120 Kerala police personnel, 100 NDRF personnel and 60 officials from the fire and rescue services and civilian volunteers are currently involved in the search operations at Puthumala. 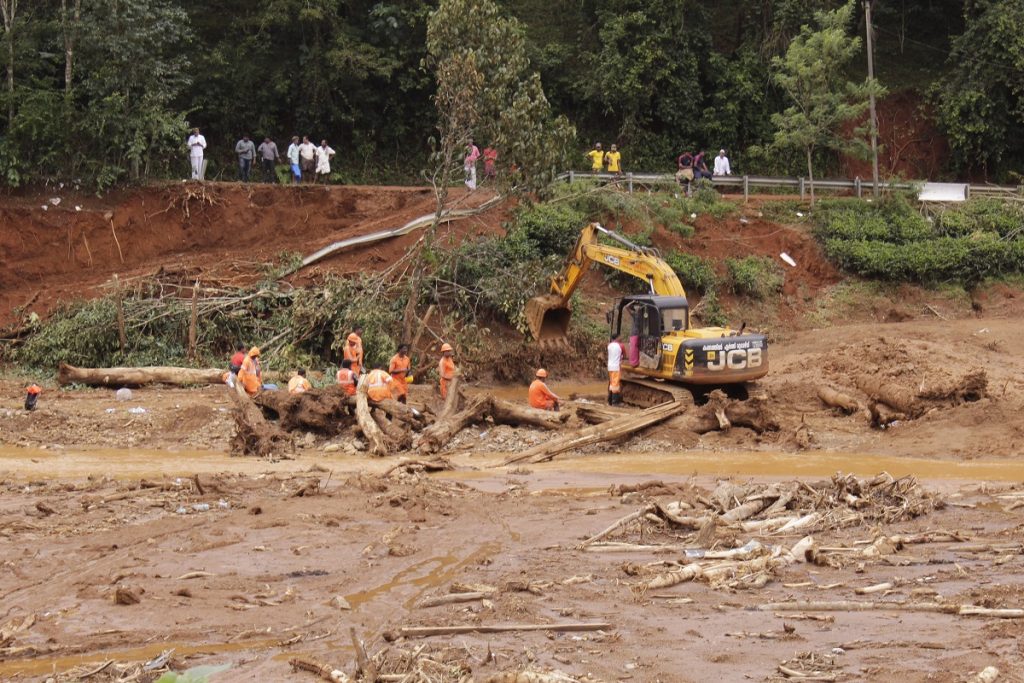 He also said several non-government organisations and individual volunteers were involved in cleaning works and relief activities, like distribution of food and clothes to the affected people.

At the Meppadi Grama Panchayat office officials and volunteers were busy unloading and recording various goods – mainly food and cloth items – that had been dispatched from different locations in the state. Officials and civilian volunteers then send these goods to the people affected by floods and landslides, most of whom are living in makeshift relief camps. 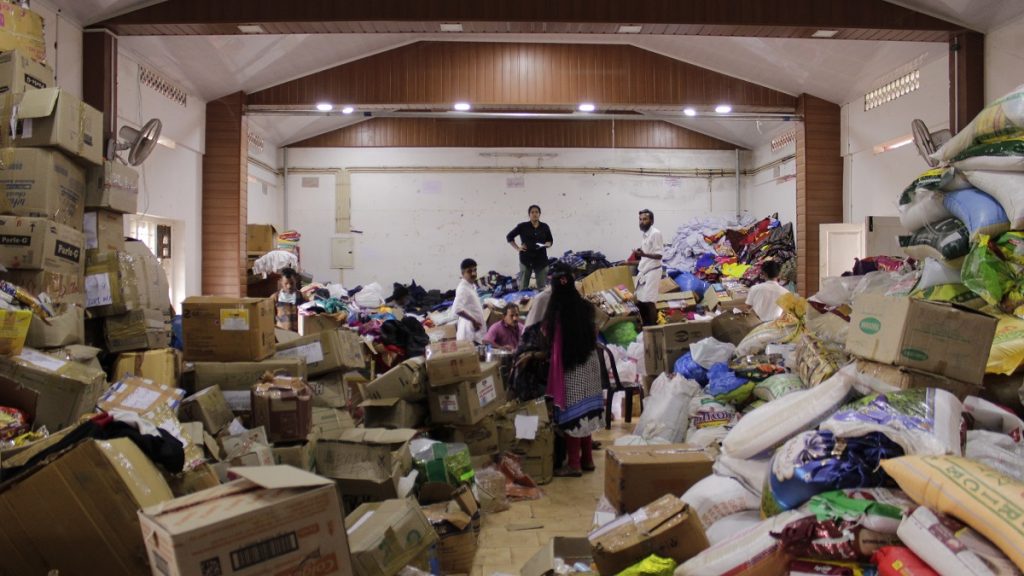 On Sunday, a relief camp at Meppadi was host to the wedding of Rabiya, a young woman who was living there. The district collector, after attended the wedding, wrote on Facebook, “This is how we overcome the perils of disaster in a graceful way. Best wishes to the young couple”.