Not Just Learn, India Also Needs to Unlearn Some Lessons From Kerala Floods

As Kerala continues to fight its battle against water-borne diseases, Nagaland is just taking baby steps towards fundraising. Normalcy is a long way away for both states. 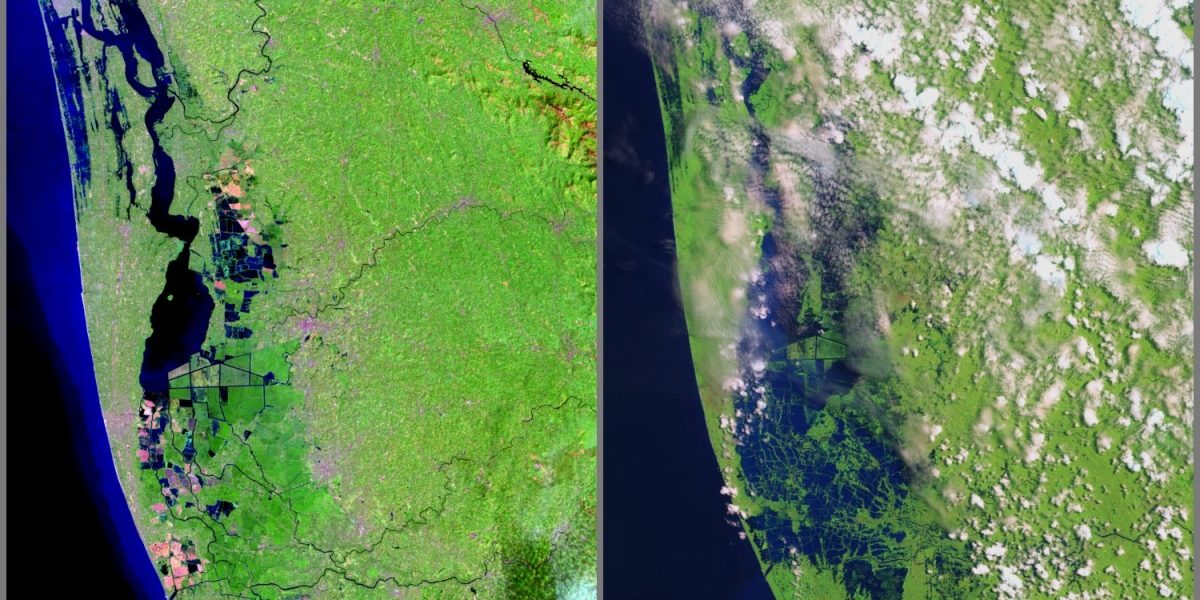 Kerala before (left) and right after (right) the 2018 floods, as captured by Landsat 8. Credit: NASA

The rains have stopped and the waters have receded. Kerala is now fighting against water-borne diseases like leptospirosis and hepatitis A. With hospitals and other infrastructure damaged beyond immediate repair, the road to recovery is slow and painful.

Since the onset of the southwest monsoon on June 1, some 370 people have died and over 725,000 have been displaced. As rehabilitation continues, it is believed the full extent of the crisis is yet to be understood.

Nagaland, at the other end of the country, is now witnessing one of the worst floods to have hit the state. Twelve people have already died and 3,000 people have been displaced. Officials say that at least 48,000 people, or 13% of the state’s population, are already affected.

If floods of this intensity had struck anywhere in the country a few decades back, they would have been among the worst in history. Now, the one in Kerala  was simply the worst in Kerala’s history. When the Tamil Nadu floods happened in 2015, they were the worst in the city for over a century. Such disasters are also becoming more common. The 2014 floods in Srinagar left 160 people dead. During the 2013 floods in Uttarakhand, some 5,700 people were presumed dead. Cloudbursts in Ladakh killed 234 people in 2010. In 2005, Mumbai came to a standstill when it received more 994 mm of rain in a 24-hour period.

Each flood is also worse than the previous one. For 53 years before 1996, the average annual damage caused by floods amounted to Rs 1,805 crore. Between 1996 and 2005, this number shot up 1.5x to Rs 4,745 crore, according to the National Disaster Management Authority (NDMA).

While climate change can’t be held responsible for the individual flood or heatwave, their increasing frequency suggests the climate today is not what it was before. Together with a burgeoning population, rapid urbanisation and haphazard development on floodplains, the country’s resilience to climate vagaries have weakened, experts say.

To deal with this problem, two things need to be done: reduce carbon emissions as a country and as a planet, while improving climate resilience by protecting the forests, floodplains and water bodies. While Kerala leads the country in the former, it remains guilty of not doing the latter.

What India can learn from Kerala

Kerala and Jammu & Kashmir are the only two states in the country to have reduced their per capita emissions to become “net removers of CO2” in 2013, according to a report by GHG Platform India, a civil society initiative. It states that the achievements will “need further, deeper analysis, and might provide clues on how to pursue an economic development strategy that is not necessarily linked to inevitably higher GHG emissions.”

Apart from better awareness among the local politicians and bureaucrats, the state also manages its solid waste (collection, segregation and disposal) better than most states, according to the report: about 35% of the waste generated is segregated and 34.3% is disposed into landfills designed to prevent leaching.

Some experts say that state-wise data need to be looked with a pinch of salt. “While Kerala may have lower emissions compared to some other states because of the lesser number of industries, it imports lots of products from other states including electricity. The emissions from these imports are not accounted in the state’s emissions,” Chandra Bhushan, the deputy director of the Centre for Science and Environment, New Delhi, said.

Officials said that nearly one-third of the state is covered with forests and about half with greenery, including agricultural lands and plantations. Additionally, according to P.H. Kurian, additional chief secretary to the Government of Kerala, there were also fewer manufacturing units and thermal power plants. Kurian oversaw rescue and relief operations during the floods.

More greenery does not mean a better environment

But nearly half the state being green still does not mean the state is off the hook. When forests are cleared for plantations, the green cover is not recorded as having been reduced. But unlike in forests, the soil under a plantation loses its ability to hold water, causing runoffs and flooding. In other words, while forests and plantations both figure as ‘green’ in official data, they don’t have the same effects. The problem becomes worse when houses are built on floodplains or when water bodies are encroached upon.

“The floods gave us a reality check on what happens when houses are built on water bodies. This is the right time for the government to come out with a progressive land use policy,” Kurian said. “Ten years back, the people would have not agreed to it, but now people have seen the consequences. We will hold wider consultations with different stakeholders to come up with a policy with a long-term to rebuild Kerala.”

But experts believe the volume of rain Kerala has received in 2018 would have flooded the state even if its landscape had been left untouched. “However, the intensity and the loss of lives and houses would have been much lesser,” Chandra Bhushan,, said.

Compiling data from Kerala’s Department of Economics and Statistics, he drew a comprehensive picture of the state’s changing landscape. “Some 70,000 hectares of land was diverted for housing and infrastructure since 2005-06. The state has lost more than four lakh hectares of natural forests and more than 2.5 lakh hectares of wetlands in the last five to six decades,” he said.

According to Kamal Kishore, a member of the NDMA, Kerala is not alone in diverting lands for housing and infrastructure development and making urban areas more vulnerable to climate disasters. “Cities have an unquenchable thirst for land. However, very little regard [has been] given to integrating hazard maps in our development paradigm,” he explained. “There is very little premium on safety in the long term.”

Since the 2015 floods in Tamil Nadu, the NDMA has trained its eyes on disaster and climate resilience in urban areas around India. It has set up a taskforce to come up with short-, medium- and long-term action plans to prepare cities for extreme weather events.

The taskforce issued a urban floods roadmap in May 2017 for all states to follow. For heatwaves, the process is underway, per Kishore. “The first guidelines were finalised in 2016 and were later revised in 2017. Last week, we had a meeting to look at how it was used,” he said. India, so far, has no guidelines for thunderstorms, lightning and squalls. “The guidelines for these will be finalised within the next three months,” he added.

He also pointed out that building approvals should be limited to those able to “counter the hazards they may face” and that municipal engineers, as among the last lines of defence, will need to be empowered to perform this screening function.

Central Kerala has seen the biggest changes in land use in the last few decades. Between Thrissur in the south and Kollam in the north, at least six rivers drain into the Vembanad estuary in central Kerala. All their flow lies impeded today. “Dams built in the 1970s changed everything. Dammed rivers with reduced water flow prompted construction in low-lying areas,” K. Soman, a former scientist of the National Centre for Earth Science Studies, Thiruvananthapuram, said. “Any rain would flood them.”

“Even the Kochi airport was built on the wetlands of the Periyar river. With such poor planning, what else can we expect apart from flooding?”

A 2008 study co-authored by Soman had found that the ‘average’ time of peak rainfall in the state  had shifted to October in 1994-2004 from June in 1855-2014. “The rains are shifting, and we are still yet to find out the long-term consequences on flooding and agricultural patterns,” Soman said.

Others agree and say that the change has been noticeable. “Typically, Onam comes as the southwest monsoon tails off towards the end of August or early September. The days are brighter and it rains less. It’s a good time for boat races and celebrations,” Suprabha Seshan, a member of the Gurukula Botanical Sanctuary in Wayanad, said. “However, we are now seeing wetter Augusts.”

The 70-acre sanctuary was nurtured over the years by partly dismantling tea plantations and growing native species of trees and plants. “For several years, the monsoon has been setting in later with each year. In June 2016, we had two weeks of dry and sunny weather. With the evapotranspiration from the forests and the onset of the monsoon, June should have been a wet month,” she said.

Deforestation is understood to have a hand in precipitating this shift, and certainly exacerbates the effects of the resulting flooding. “Just like the trees need the rains, the rains also need the forests. Each blade of grass is an individual water tower. Vegetation helps in the formation of rain clouds. Without forests, the soil cannot hold rainwater and this causes flooding in areas downhill,” she explained.

As Kerala continues to fight its battle against water-borne diseases, Nagaland is just taking baby steps towards fundraising. Normalcy is a long way away for both states.

Karthikeyan Hemalatha is a freelance journalist based in Bangalore.