Kerala Is Experiencing a Catastrophe of a Lifetime, and It Shouldn't Have to Face It Alone

With unprecedented loss of life and property, the Kerala floods must be taken up as a national issue. 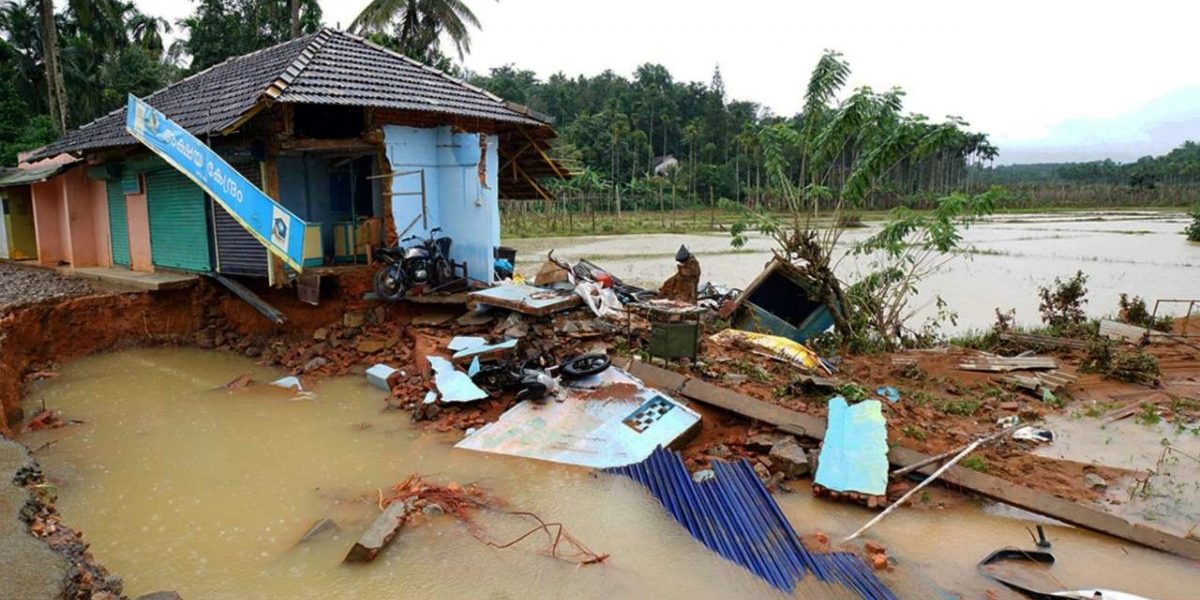 Large scale destruction has prompted the Kerala government to seek Rs 2,000 crore as aid from the Centre. Credit: PTI

Thirty-five of Kerala’s 39 dams have been opened, 41 of its 44 rivers have been flowing above the danger mark and nearly 170 lives have been lost. Kerala is reeling under the worst flood devastation in its history, and a series of landslides have given spinal shocks to the state. This is undoubtedly a catastrophe of a lifetime.

The death toll from the unprecedented downpour across the state reached 168 on Friday, and many remain missing as massive flooding and landslides have destroyed homes and displaced 2,23,000 people. Scores remain stranded in the top floors of submerged houses, with water levels rising every hour. Distress calls have been pouring in at the emergency response centres set up in every district’s headquarters.

“My uncle is stranded on the first floor of his house in Aranmula (of Pathanamthitta district) with the dead body of his wife who died yesterday. I can’t even imagine it, please help him sir,” said a young man from Bengaluru over a call to the helpline number, which I happened to attend to as a volunteer. 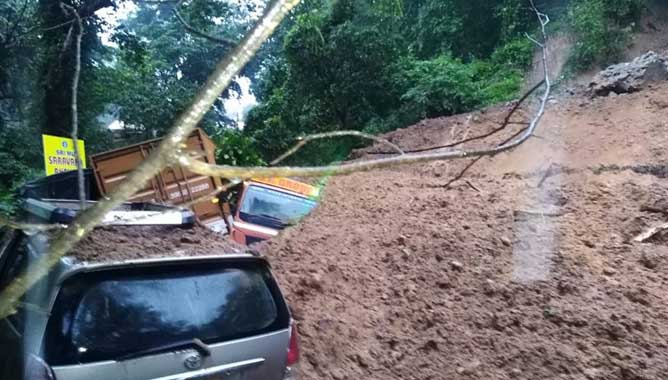 “Another family in Chengannur, Alappuzha district also have a dead man with them,” added a police officer checking his pocket diary. “They have tied the corpse with the rail of the staircase to prevent it from being washed out,” he added. Lives have taken a turn for the extraordinary since the downpour began.

“A woman here in a flooded house has gone into labour, please rush some help,” a volunteer’s voice came in on the wireless set.

“There are eight women with dates due today or tomorrow in a nursing home where the ground floor is filled with water,” said another message to the emergency operation centre. 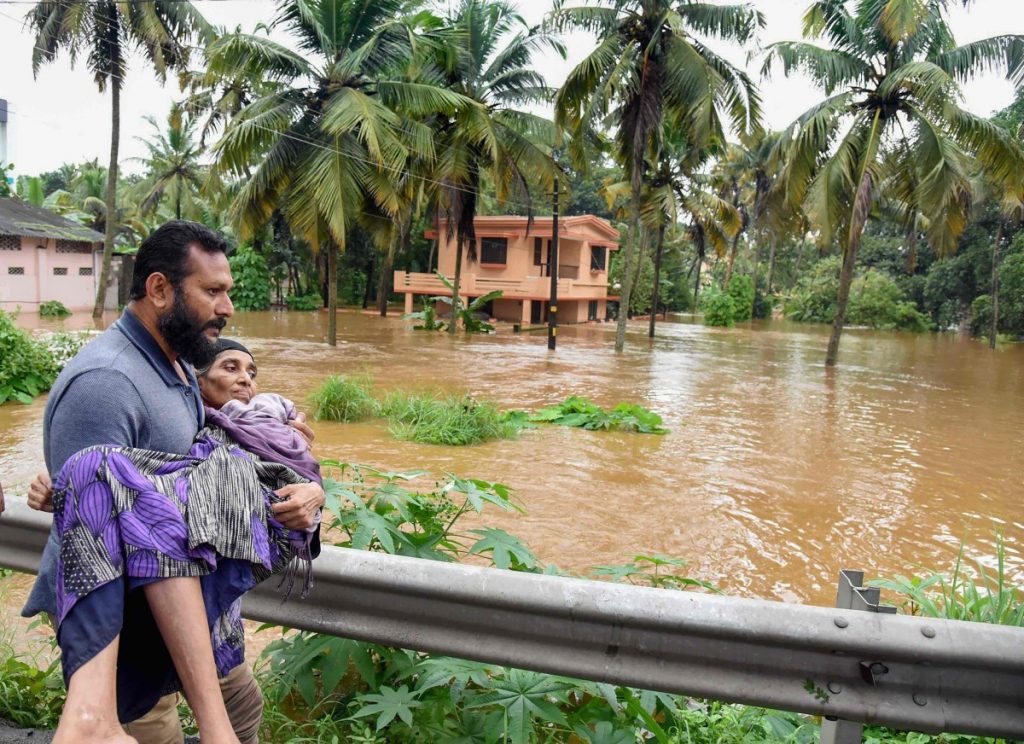 Several hospitals with hundreds of in-patients have been heavily hit. At the time of writing, hundreds were awaiting their fate amid torso-deep water inside their houses. Six hundred students were stranded inside the Sree Sankaracharya University of Sanskrithy, Kalady as their campus was sandwiched between two violently overflowing rivers: Periyar and Chalakudy. Churches, mosques and temples have become refugee camps for hundreds with many of them under the threat of submerging. The districts of Pathanamthitta and Ernakulam have been the worst affected in the second phase of rains. 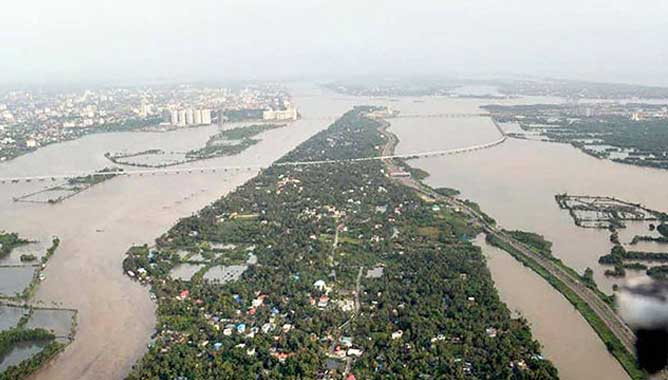 The death toll from the unprecedented downpour across the state reached 168 on Friday. Courtesy: Dool News

Rains began a few weeks ago and intensified over the last week. The record rainfalls in various parts of the state caused rivers to burst their banks, and triggered large-scale floods and landslides in several areas. It was the landslides that caused the majority of deaths. More than 80 were buried alive in the landslides. Hundreds of houses have been destroyed.

The government machinery was on guarded when the first phase of rains started. Like a well-oiled machine, they promptly cautioned and evacuated people living on the banks of the river. The shutters of major dams were opened systematically, but a few lives were lost in unexpected landslides and one or two drowning incidents. The five shutters of Idukki dam were opened for the first time, as the water level touched 2,401 feet. The Malabar region was the worst-hit in this first phase with the hilly areas of Wayanad, Nilambur and Eastern Kozhikode seeing multiple landslides. Chief minister Pinarayi Vijayan invited the opposition leader Ramesh Chennithala to accompany him for the arial survey of the affected areas. But the real showdown of the nature was yet to happen.

The estimated loss after the first phase of flood stood at Rs 8,316 crore in a preliminary assessment. Vijayan had requested for immediate assistance of Rs 1,220 crore from the Union government, inclusive of the already-allotted Rs 820 crore. Rajnath Singh, who had visited the flood-hit areas, offered Rs 100 crore – an amount less than even 10% of the demand, inviting huge criticism from both the Left and the Congress, even though the CM did not come out openly against the Center. The refusal of the Central government to declare the floods as a national calamity on technical grounds also irked the non-BJP block.

“The flood shall be declared as a national calamity. A moratorium on agricultural loans shall be declared. This was the biggest flood in last five decades,” said Chennithala. This was before the second wave of floods, which hit the state when the controversial Mullaperiyar dam neared its capacity. The incessant rain worsened the situation as dam shutters across the state had to be raised, causing unprecedented floods from last Monday. This time, it was well beyond the capacity of the state machinery, and the situation started slipping out of hands. From south to north, all the districts were affected badly with Pathanamthitta, Ernakulam and Trissur being the worst hit. Periyar, Chalakudy, Pamba, Achankovil and Bharathapuzha rivers flooded. Houses on the banks were sunk with water levels reaching the rooftops of two-storied buildings.

Kerala and Tamil Nadu at loggerheads

The reluctance of Tamil Nadu to open the gates of Mullaperiyar dam somewhat added to the worry and hampered the thus far friendly relations between the southern neighbours. Despite the Kerala chief minister writing a distress letter to his Tamil Nadu counterpart, the response was far from satisfactory.

“I am informed that Tamil Nadu field engineers have informed that their digital water level recorders are now malfunctioning and hence are unable to record water levels accurately and are measuring the same manually from ordinary gauge posts installed in the river. Such a stand is inappropriate as the readings from manual gauge posts are prone to error, more so given the current weather and wind conditions at the dam site,” Vijayan wrote in his letter to the Tamil Nadu chief minister. In his reply, Edappadi Palaniswami maintained the stand that the dam is “hydrologically, seismically and structurally safe”. Finally, the Supreme Court had to intervene. 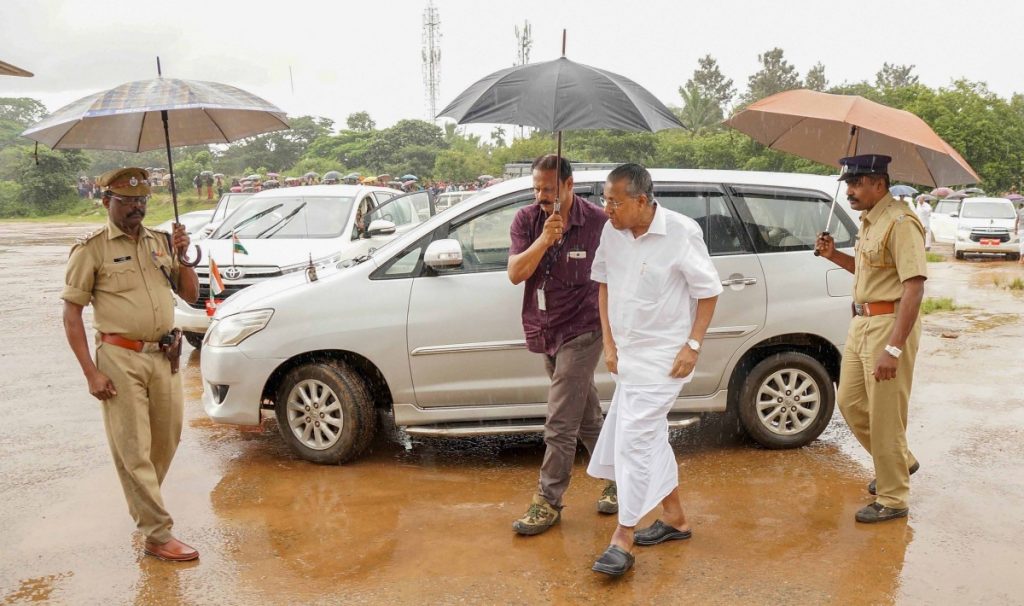 “We have been releasing water from our dams in different stages since the beginning, considering the extreme weather situation. But Mullaperiyar dam water was released only after it touched 142 feet, leading to intensified water discharge and impact,” said Vijayan.

During the first phase, Tamil Nadu extended substantial support to the flood-hit neighbour, offering an assistance of Rs 5 crore for relief activities. Even after the letter and the not-so soothing reply, Vijayan has been maintaining calm and said the two states are working in tandem on the dam maintenance.

Even after a week of continuous catastrophic events down south, the English and Hindi media, television in particular, were not interested in extending substantial coverage. The coverage also lacked comprehension barring some exceptions, prompting strong responses from the media fraternity. 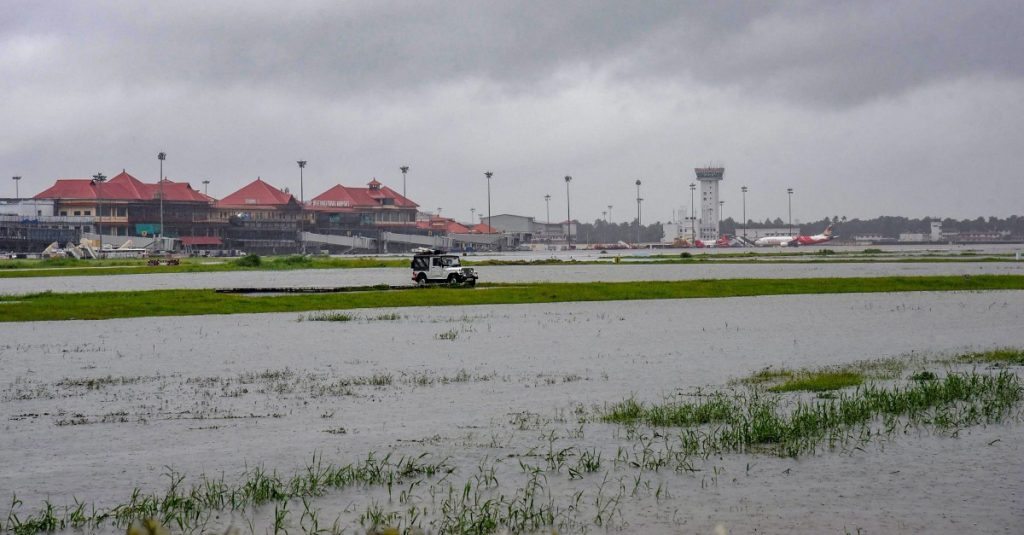 Lakhs of people have been put up in the six thousand odd relief camps across the state. Credit: PTI

A campaign holding the Modi regime responsible for the lack of adequate help from the Centre is gaining momentum on social media. The negative campaign led by non-Keralite Sangh parivar social media handles also did not add up. A vicious campaign urging the ‘Hindu community’ not to help Vijayan-led government with contributions was launched from some known Sanghi social media corners. On the contrary, the lone MLA of the BJP, O. Rajagopal and former state president and Mizoram governor Kummanam Rajasekharan were quick to respond to the CM’s call by contributing decent amounts to the Chief Minister’s Distress Relief Fund, which is gaining good response, thanks to a counter campaign by the Leftist cyber foot soldiers.

Here’s how you can help those affected by the unprecedented floods in Kerala. Now you can make donations online to Chief Minister’s Distress Relief Fund through the site, https://t.co/OFHTHlZ9by #KeralaFloods #StandWithKerala. pic.twitter.com/XNlBKqdCUT

When the biggest rescue operations the state had witnessed getting underway, it is getting clearer and clearer that this could not be handled by a state government alone. This must be taken as a national issue if not a ‘calamity’. National and international agencies should be roped in as the scale of the disaster seems to be out of bounds. Rebuilding lives from this muddy ground when water recedes would be the biggest challenge before all of us here.