Could factors that powered extreme rainfall in 2018, triggering the worst flood in a century in the country, be at play in the 2019 rainfall-induced devastation in the state?

People move to safer grounds from a flood affected area in Kozhikode, on August 10. Photo: PTI

A confluence of factors that powered the extreme rainfall in the southern Indian state of Kerala in 2018, triggering the worst flood in a century in the country, could be at play in creating chaos in the current rainfall event in the coastal state, researchers said.

Sandeep Pattnaik and Himadri Baisya at the Indian Institute of Technology Bhubaneswar, Odisha, examined the reasons behind the most intense phase of the Kerala rainfall event (13 to 17 August, 2018) in a study published in May 2019.

The researchers said a surge in moisture packet helped by the Arabian Sea monsoon flow and depression over the Bay of Bengal and features of the Western Ghats mountains triggered the torrential rains that battered Kerala in August 2018.

And as heavy rains lash Kerala exactly a year on, the study authors pointed to the build-up of eerily similar conditions in the state, where the flood-related death toll has touched 102.

Shedding light on the weather science of Kerala floods, the researcher said that precipitation was 42 percent more than the longterm average from August 13-17, 2018. And the extreme rainfall event was not a single-person show but a combination of factors working in a unified manner.

“In August 2018, there was an abnormal amount of moisture build-up in the air due to the south-west monsoon flow from the Arabian Sea and a low-pressure system over the Bay of Bengal. The lifting of moisture-laden air when it hits the steaming slopes of the Western Ghats (orographic effect) acted together to make the rains deadly over Kerala,” said Pattnaik of IIT Bhubaneswar’s School of Earth, Ocean and Climate Sciences.

“It seems a similar set of conditions is brewing, which is creating chaos in Kerala this year,” said Pattnaik, adding they would study the fresh trends from this year.

In the latest development in Kerala, a red alert was sounded in some of the northern Kerala districts. A low-pressure area is developing over the Bay of Bengal and there was fear of heavy to very heavy rain in central and north Kerala.

Elaborating on the 2018 phenomenon, the researchers said that from August 13 to August 17, 2018, the moisture build-up in the air was more than the average moisture level recorded for the last 30 years for the month of August.

A combination of factors that came together

But a rich moisture supply on its own is not enough. For the moisture to convert to rain, it needs to be “advected” towards the higher levels of the atmosphere. Moisture advection refers to horizontal transport or upland flow of moisture, which plays a very important role in the development of precipitation. The rising ability of moist air was supported by the structure of the Western Ghats mountains, according to the study. 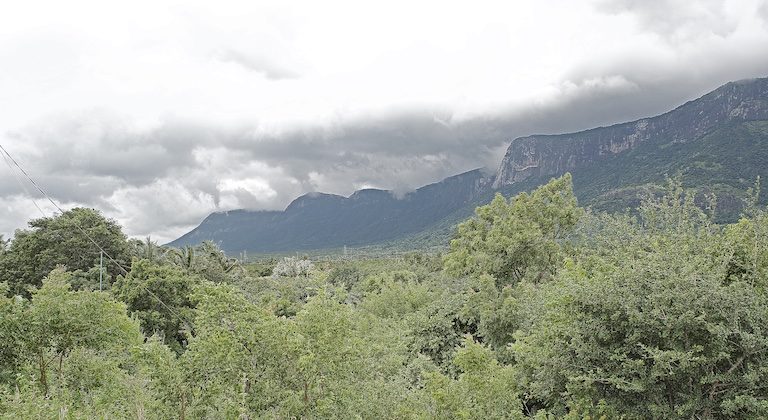 The Western Ghats blocked the rain bearing clouds and caused them to rise and precipitate. Photo: Mongabay/S. Gopikrishna Warrier

The high montane forest ecosystems of the Western Ghats, that are older than the Himalayas, influence the Indian monsoon weather pattern. It is one of the world’s eight ‘hottest hotspots’ of biological diversity. Moderating the tropical climate of the region, the Western Ghats presents one of the best examples of the monsoon system on the planet.

“We asked: was it only in those five days that these two factors (moisture advection and mountains) were able to facilitate this kind of rainfall? The monsoon depression over the head Bay of Bengal (northern Bay of Bengal) during that time was continuously supplying the moisture to the Kerala region and this picture continued for those three to four days,” said Pattnaik.

“Thus the perfect synchronicity of multiple oscillations aided in the development of the catastrophic event in Kerala,” the study said.

During the August 2018 floods, two factors that are a more or less semi-permanent feature of the region – moisture advection and orography – were the same as other years. The differentiating factor was the moisture coming due to the depression over the Bay of Bengal, the researchers explained in the study.

The study findings could help improve local rainfall prediction when high-resolution information on orography, cloud structure and the land-ocean transition is included in weather forecast modelling. It will help improve the prediction of localised extreme events, said Pattnaik.

Atmospheric chemistry and physics researcher Sachin Gunthe, who was not associated with the study, noted that the role of atmospheric aerosols that serve as seeds for cloud formation needs to be unpacked.

“While such studies are very important and enhance our much-needed understanding of the large-scale processes, responsible for bringing and sustaining the moisture on the continent. This, however, it only half the story,” Gunthe, Associate Professor and Head Max Planck Partner Group at IIT Madras, told Mongabay-India.

Gunthe said that when abundant moisture is available, how microphysics played the role still remains a great mystery. Atmospheric microphysics deals with how the small tiny suspended particles called atmospheric aerosols become the most essential ingredient for the formation of clouds and precipitation.

“At the same time, unless we do not have systematic measurements of aerosol properties associated with cloud and precipitation formation we would not know, if and what role aerosol played for such a sustained rainfall,” he added.

The article was originally published on Mongabay India.