In Times of Disaster, the Reinventing of a People

The handling of the Kerala floods has “Keralite” written all over it. It has demonstrated the state's power to be a people while fire-fighting a situation. Volunteers work at an aid distribution centre inside a stadium in Kochi, in Kerala. Credit: Reuters/Sivaram V/Files

The Kerala floods have affected every single Malayali: I haven’t seen anybody who doesn’t have relatives, relatives of relatives, friends or friends of friends affected by the flood. A flood that has left a million people in refugee camps across 12 of 14 districts, already led to the loss of over 360 humans and hundreds of animals, and with losses amounting to Rs 200 billion, is truly pan-regional.

Sandwiched between the sea and hills, characterised and beautified by water bodies, floods are not new to Kerala: one of the reasons for people’s shock in reckoning with the murderous advancement of water was that they were all too familiar with its advancement. But this time was like nothing ever known: it rained for a good three months, wearing out people. Hills opened out in recurring landslides and then the dams had to be opened when the continuous rains started filling them, inundating areas and forcing Kerala to a new nightmare-reality.

S. Nagesh, a senior English academic from Kozhikode, observed, “Usually, the first response to any disaster is as per the benign instincts of the people”. The by-now-acclaimed success of Malayalis in dealing with the present disaster has been its ability to give a machinery for the expression of the good in the collective conscience.

Fishermen from south and central Kerala, that angelic presence in the rescue operations, saved between 20,000 and 30,000 lives, is the talk. When the chief minister of Kerala, after hailing the fishermen as “the army of Kerala”, announced a daily remuneration of Rs 3,000 for every day of rescue work, a fisherman, Khais Muhammed, made himself all the more endearing by refusing to accept any payment for saving the lives of fellow human beings, through a Facebook live. 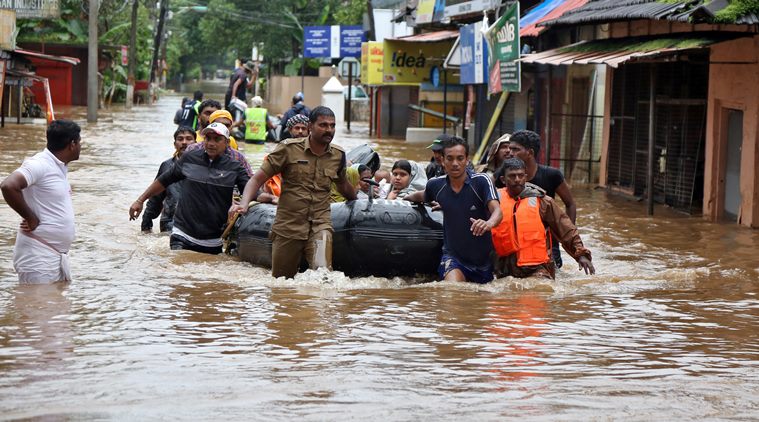 Rescuers evacuate people from a flooded area to a safer place in Aluva in Kerala. Credit: Reuters/Sivaram V

The Kerala public sphere, the avant-garde of which is the social media with its active and huge youth user base, is often blamed to be terribly senile in being divisive and dogmatic. But the youngsters and scattered public, who used all their digital channels and ethical impulses in coordinating rescue operations and relief work both on cyberspace and on the ground, showed another side of this lot.

This was not limited to Malayalis in flood-affected areas. A lot of people stayed awake in other parts of Kerala and India as well, something their round-the-clock Facebook posts attest to. College students were all over the flood-affected areas with their newest energy, as though to answer their calling. Four of our third-year students in St. Stephen’s College, Anu, Sulthana, Keren and Akhil spoke with gleeful endearment about their first-year juniors, both Malayali and non-Malayali, who have moved to Delhi less than a month ago, walking into the malls and standing outside metros asking for financial contributions from Delhiites – a spirit that unmistakably reminded one of the voluntary work of college students during the Bihar famine of the late 1960s.

The joining hands of the most marginalised and the youth have always given wonderful political results but here it was deployed in the cause of rescuing lives from natural fury. A patient and up-to-the-task political leadership made the best use of it all through its machinery while giving people confidence.

Though Kerala has its substantial share of Christian and Muslim majoritarianism, the BJP seemed to have monopoly over the mistakes of commission and omission during the floods: they waited till the prime minister’s personal visit to announce the first major relief of Rs 500 crore (in addition to the Rs 100 crore announced earlier) – an amount perceived to be very little given the magnitude of the disaster. The BJP states didn’t announce any financial aid to Kerala till they were heavily criticised and the people who tried to insult flood victims and malign rescue operations, at a time the processes were still on, were all found to be their workers or sympathisers. The perceived antagonism of the BJP to the state, allegedly present in the steps and responses of the Central government, has actually caused the strongest resurgence of Malayali nationalism ever – something developing along the Tamil lines. Just like Amit Shah’s re-christening of Onam as Vamana Jayanti a couple of years ago, the BJP seems to lose the plot all too quickly in the state due to their inability to grapple with multiculturalism.

Just as Malayalis found themselves outside the national narrative, they also found solace in the international support and help that poured in, thanks to the fifty years of Malayali expatriate life. The UAE announced a relief amount of 100 million dollars and countries such as Qatar and Canada extended their support. This doesn’t look ungrammatical for the state that established its connections with the global economy in the sixties itself: export of cash crops and fish, and most definitively, human resource – the state’s journey has been its give and take with the global economy, totally outside the national.

Instances of co-living, which Kerala always projected, found hearty expressions: a Temple Hall in Kochukadavu, Thrissur functioning as Eidgah and Muslims in Thenkara cleaning up the temple after the water receded were additions to this register of the folklore. People are airlifted by the Indian Navy soldiers during a rescue operation at a flooded area in Kerala. Credit: Reuters

Towards a collective political imagination?

But it is unrealistic to expect the benign to stay on or be remotely adequate in the months to come.

There are long-term repercussions of these floods, as Reem Shamsudheen, who got stranded on top of a mosque hall without any facilities for over 50 hours before she was rescued, points out: “For Onam sales, a lot of textile merchants borrow money from various sources and store a lot of clothes. All that has been ruined in this flood. How would they manage to start all over now?” Tourism is another area of huge revenue loss in the coming six months, leading to a possible further shrink in the economy.

Just as one congratulates the ethical sense and political will in the entire episode, it is important not to forget that neither the stabilisation of the economy nor infrastructural reconstruction can be decentralised, in a way it got built up. What took 30-40 years to construct for individuals is going to have to be done in a matter of months in some new, sustainable and imaginative way. The state hasn’t rethought its feudal ideas of housing or social advancement through marriage in all these decades of operating in a global economy. The new layout of the human landscapes primarily needs an image and a new philosophy of organising social life. This calls for the involvement of experts in ecology, water management, waste management, nature friendly architecture ( “This is the state that embraced Larry Baker decades ago though they lost the way somewhere”, P. Sainath reminded in a chance conversation) and people who can tell newer stories and create a different set of value system. Like Euro-American cities, there has to be a well-thought-out plan about the building of these new areas.

In all this, a key component has to be the environment. Kerala has had a fake encounter between romantic ecological activism of conserving spaces and pragmatic infrastructural development for familial or touristic/commercial places. The former sounded uselessly elitist while the latter naturalised what was unsustainable and harmful. There clearly has to be a new path between these available narratives. Environmental debates have been only fear-mongering without going into constructive and doable solutions, says M.B. Manoj, environmental activist and poet, using the example of the Mullaperiyar dam. “The tunnel of Mullaperiyar dam, used to let water go to Tamil Nadu, is an old one, made with hands. Now using contemporary technology, it is possible to build a new tunnel and decrease the water. This idea has been available for at least some years. Our media, which spreads scary stories about the dam about to break and so on, never gave enough visibility to such proposals”.

The Kerala media, which survives on topical sensationalism, will need to take up environmental issues steadily and in a nuanced manner. It is extremely important that the media doesn’t use environmental issues for arbitrary rhetorical onslaughts – all three fronts of political parties in Kerala have extremely questionable past and they have exhibited absolute theoretical bankruptcy in this area. What took 30-40 years to construct for individuals is going to have to be done in a matter of months in some new, sustainable and imaginative way. Credit: PTI

Anyhow, the vigil of the concerned citizens needs to be kept alive throughout the process of reconstruction: bureaucracy lags mindlessly, NGO sector is alleged to be self-serving more often than not, political parties have either the corrupt or the partisan, media likes personality fights that make for prime time discussions and everything can become “normal” in certain circumstances. It is also inadequate to not further the blame to the so-called “public”: in our area in north Kerala, one is all too used to hundreds of people taking money from quarry owners for huge extraction of stones. Such decentralised modes of corruption, which have caused a huge ethical vacancy, merit deep introspection and correction in the difficult road ahead.

In addition to all these, there are basic concerns about both the state’s and the country’s ability to attend to conditions as miserable and dangerous as these. “Military men saying they do rescue operations only during the day and not in the night or that they can’t operate due to trees and heavy rains puts a serious question mark on our technology and techniques”, says Abhilash V., a Hyderabad-based Malayali. A Dubai-based entrepreneur V.P. Haris said we need to differentiate between disaster management and fire-fighting: “Experts should both have the domain knowledge and the ethical vigour to first go into the predictable, possible worst conditions and think deeply about how to make things better in different available situations. The governmental systems seem to be woefully lacking on this front ”.

The handling of the disaster and precipitant issues have “Keralite” written all over it. It has demonstrated the state’s power to be a people in fire-fighting a situation. But if they have it in them to manage disasters, in preventing them and handling them systemically, is the larger question. To this end, they will have to reinvent themselves outside the available paradigm and work outside their habits of the last half-century.

N.P. Ashley teaches English at St. Stephen’s College, Delhi. Born in north Kerala, he was in the state during the high-days of the flood.