The current rain-related havoc hit the state exactly one year after the deadly floods and landslides last year, causing worry among many that the annual monsoon season is going to be deadly on a regular basis. 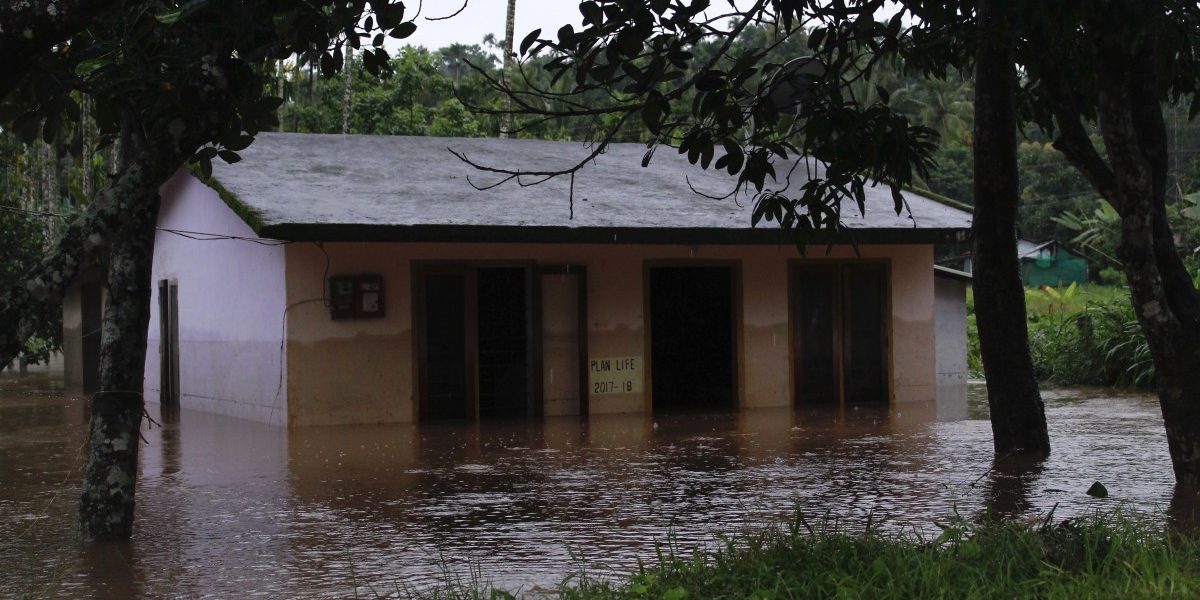 A house affected by floods, at Kenichira in Wayanad. Photo taken on August 10, 2019. Photo: Aswanth S.M.

Kannur (Kerala): Efforts are underway to recover bodies from debris at Kavalappara, near Nilamboor in Malappuram district, Kerala, where local authorities say more than 50 persons remain missing after heavy landslides hit the village on August 8 and 10. So far 11 bodies have been recovered from the site, according to local news media.

A similar search operation is underway at two other sites – Meppadi in Wayanad and Kottakkunnu in Malappuram.

In Wayanad, at Puthumala near Meppadi, where a massive landslide hit on Thursday evening, 10 bodies have been recovered so far, and search for another seven persons continues. The search is halted for Sunday due to heavy rains in the area, local media reported.

At Kottakkunnu, near Malappuram town, where a landslide hit a family’s house on Friday, rescue operators found dead bodies of a young woman and her child on Sunday, while the search for a third person missing is underway.

Meanwhile Rahul Gandhi, who represents Wayanad in the Lok Sabha, landed in Kerala.

For the next few days I will be based in my Lok Sabha constituency, #Wayanad that has been ravaged by floods. I will be visiting relief camps across Wayanad and reviewing relief measures with District & State officials.

Both Kavalappara and Mappadi are parts of the Wayanad constituency.

The chief minister also warned against the spread of misinformation that he said affects both “rescue operations” and “correct decisions to be taken by the public”.

The chief minister, in a separate Facebook post, asked for “support and interventions” to “effectively run” relief camps. 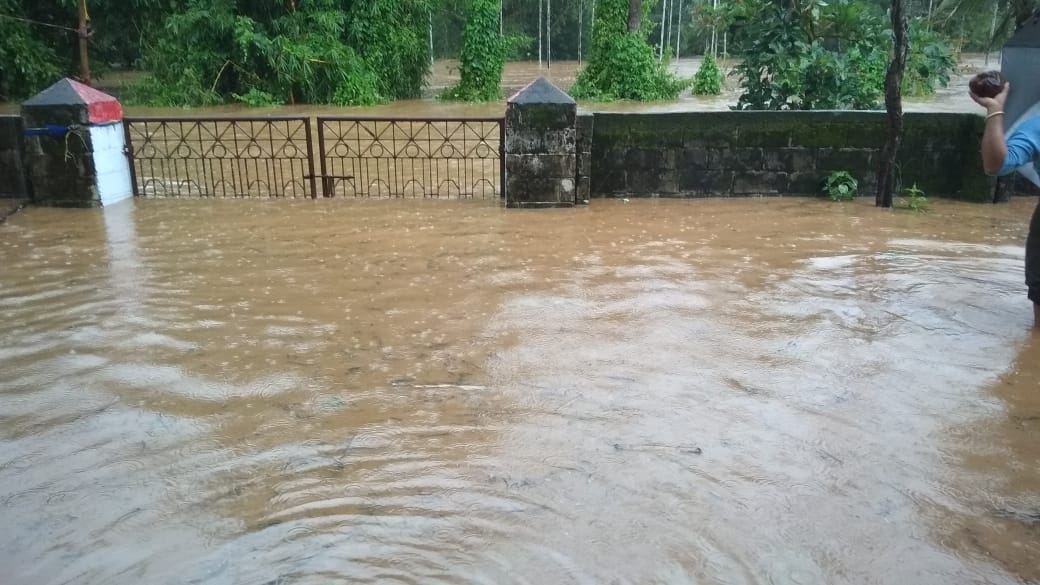 A scene from Kottavayal, a village in Wayanad. Photo taken on August 09, 2019. Photo: Shawkath Ali

Train and bus services and electricity supply continue to be broken across the state. Several houses have been completely destroyed due to the landslides, and several others remain useless due to floods.

Unlike the last year, when southern and central parts were hit worst, northern districts like Malappuram, Wayanad and Kozhikode are most affected this time. Wayanad, however, was affected severely last year too.

Relief work is being coordinated at the district level. Most district collectors, as well as civilian volunteers, use social media to coordinate relief activities, giving updates on the relief camps and necessary goods needed for those in the camps.

The Kozhikode district administration said on Sunday that the number of people in relief camps crossed 50,000. This is the first time such a huge displacement of civilians has taken place in the district, according to officials. Authorities also released a list of 17 goods immediately required at camps. Similar requests earlier met with a moving response from the public.

According to the Malappuram district administration, 226 relief camps have been set up in the district, and 47,293 persons from 13,729 families have moved to these camps. In the district, Indian Army helicopters were used to deliver food kits to places where people continue to be trapped. 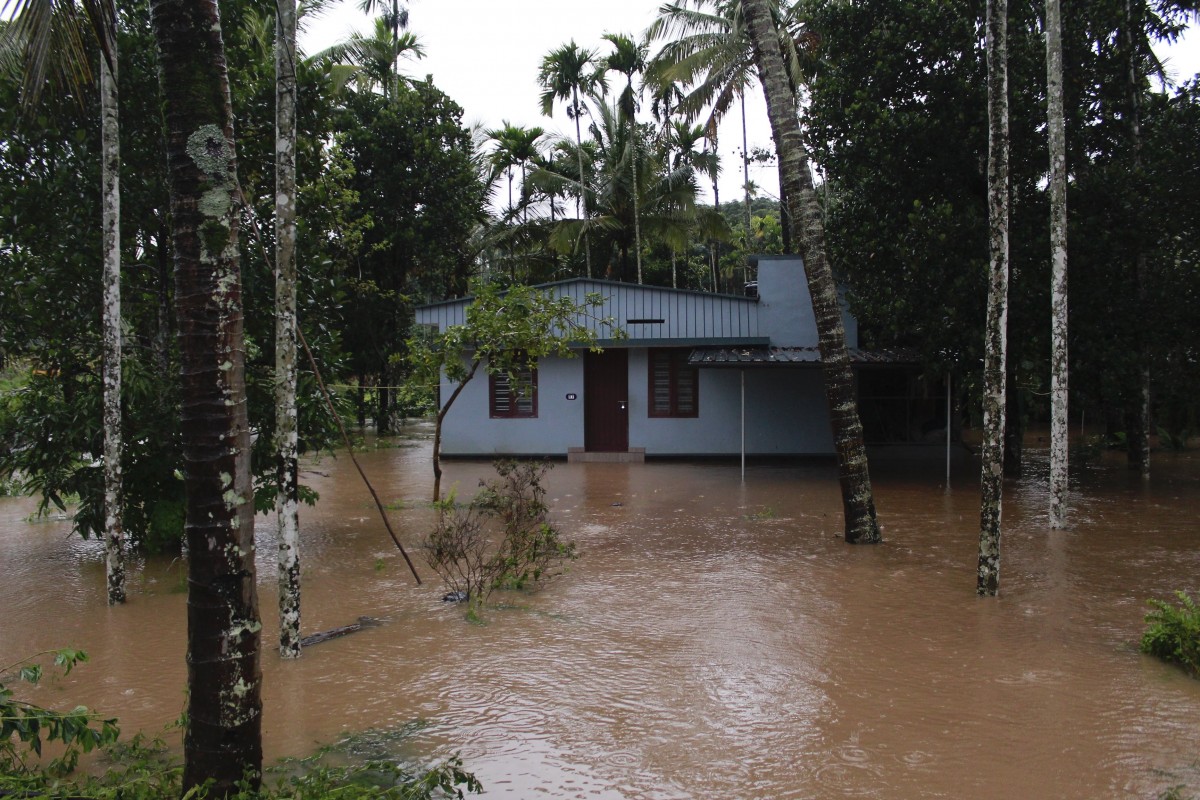 A house affected by floods, at Kenichira in Wayanad. Photo taken on August 10, 2019. Photo: Aswanth S.M.

In Wayanad, 193 relief camps provide temporary shelter to 32,000 civilians, according to the estimate of the district administration by Saturday evening.

Besides the government agencies, voluntary organisations, social and political groups, community initiatives and individuals are taking steps to reduce the uneasiness of people affected.

From August 7, heavy rainfall and winds hit across Kerala, causing landslides, floods and other unfortunate incidents. Many rivers are overflowing and gates of several dams were forced to open.

The weather in the state, however, remained largely calm on Sunday.

The current rain-related havoc hit the state exactly one year after the deadly floods and landslides last year, causing worry among many that the annual monsoon season is going to be deadly on a regular basis.