The apex court says that sustainable and cost-effective alternatives should have been considered before this project. India’s first inter-state river interlinking project has hit a roadblock with a Supreme Court committee questioning the basis on which wildlife clearance was granted to it.

Punching holes in the green clearances given to the Ken-Betwa Link Project (KBLP) by the Indian government’s environment ministry, the Central Empowered Committee (CEC) of the Supreme Court of India has raised questions about the basic viability of the project. The KBLP, proposed across Madhya Pradesh and Uttar Pradesh, envisages a transfer of surplus water from river Ken’s basin to river Betwa’s basin to provide water in areas in the upper Betwa basin that are facing water shortage.

The CEC’s report came in an ongoing case in the Supreme Court regarding the wildlife clearance granted to the KBLP Phase-I by the Standing Committee of the National Board for Wildlife (SC-NBWL). The report was submitted to the apex court on August 30, 2019.

The CEC’s report raised fundamental questions not only about the appropriateness of the wildlife clearance given to the Ken-Betwa project but also its viability, optimality and desirability, said Himanshu Thakkar, coordinator of the South Asia Network on Dams, Rivers and People (SANDRP), a network of organisations and individuals working on issues related to the water sector, specifically associated to large dams. “This a massive setback for the Ken-Betwa project. We hope the government wakes up to the reality and shelves the project and immediately goes for more viable, quicker, cost-effective and less damaging options for Bundelkhand,” said Thakkar.

The Rs. 280 billion project involves the construction of a 77 metre high and 2,031 m long composite dam across river Ken near village Daudhan in Chhatarpur district of Madhya Pradesh. Once completed, in an estimated nine years, the dam is expected to provide irrigation facility to 606,980 hectares area, drinking water facility for 1.4 million (14 lakh) people and generation of 78-megawatt hydropower. Water will be transferred through a 221-kilometre long Ken-Betwa Link Canal Phase-l which will be constructed along the left bank of the river Ken.

The project is also expected to result in submergence of over 9,000 hectares of area and out of that 5,803 hectares is in the Panna Tiger Reserve (PTR).

The plan to link India’s rivers is not new. In 1980, a National Perspective Plan (NPP) was prepared by the then Ministry of Irrigation (now Ministry of Jal Shakti) for water resources development through the inter-basin transfer of water, by transferring water from water surplus basins to water-deficit basins.

“Under the NPP, the National Water Development Agency (NWDA) has identified 30 links (16 under the peninsular component and 14 under Himalayan component) for preparation of feasibility reports. KBLP is one among those 30 identified links,” said the Minister of State for Jal Shakti & Social Justice and Empowerment Rattan Lal Kataria while replying to a query in Parliament in July 2019. “Various statutory clearances except stage-II forest clearance and clearance from the CEC of Supreme Court have been accorded for components under KBLP Phase-I. The clearances for the projects proposed under KBLP Phase-II are in advanced stages.”

Subsequently, in February 2012, the Supreme Court of India ruled that the river interlinking programmes are in the national interest and directed the central government to pursue it. It had directed the central government to form a special committee for interlinking of rivers to take up the Ken-Betwa linking project, for which a detailed project report was ready, for implementation at the first instance.

Since 2014, the Narendra Modi government has been seriously pursuing the river linking project. Before the 2019 elections for India’s parliament, Bharatiya Janata Party in its manifesto had talked about expediting the river interlinking project to ensure the solution to problems of drinking water and irrigation. BJP had promised to constitute an authority to work on this project.

After winning the 2019 elections and coming back to power, PM merged all water-related departments to form the Jal Shakti ministry. Gajendra Singh Shekhawat after taking over as the new water minister of the country had also spoken about pursuing the river interlinking project.

Now, the CEC in its recent report has held that “there is a wide divergence in the observations made by the (sub) Committee constituted by the SC NBWL and the recommendations on mitigative measures ultimately made by the SC NBWL. In fact, the SC NBWL has not given due consideration to the critical observations of the Committee of SC NBWL while considering the proposal for wildlife clearance submitted by NWDA (National Water Development Agency).”

Among the discrepancies, the CEC noted that alternatives to meet the objectives of KBLP have not been examined. “The projection of availability of surplus water in Ken basin for transfer to Betwa basin without first exhausting possibilities for the development of irrigation facilities in upper Ken basin appears to be premature particularly considering that an investment of Rs 280 billion (Rs 28,000 crores) of public fund is involved,” said the CEC report.

It also held that the primary objective of the KBLP of providing irrigation facilities and alleviating poverty can be achieved through alternative methods of water conservation/harvesting at the local level and that too at a much cheaper cost.

Analysing the cost-benefit of the project, the CEC report noted that the costs of implementation of the landscape management plan for tiger conservation and the species recovery programme for vultures and ghariyal (Gavial) are yet to be worked out and once included in cost-benefit analysis, could make the project economically unviable.

The CEC also observed that the Daudhan Dam would restrict the wildlife corridor in the Panna Tiger Reserve for movement of animals.

There is a visible disconnect between the information about river linking in national media and the information available to the communities that will be impacted, noted river researcher and activist Siddharth Agarwal. “We spent about a month and a half, walking along the Ken, documenting the river and the riparian community. There was a lot of talk about the river and river-linking in the national media, but we were shocked to observe the absence of information in the local region. Most people living in villages along the Ken had absolutely no idea that such a project had been proposed to alter the landscape that they inhabit,” Agarwal told Mongabay-India.

He explained that river Ken’s catchment has been anthropogenically transformed, but the upper catchment seemed to be comparatively lesser modernised in respect of roads, electricity and chemical farming.

“Even stretches that did not form part of a national park or protected area retained some of their native features. We even noticed wild animals and birds in substantially higher numbers, with reports of more sightings by the locals – though most lands had been brought under cultivation, he said. “However, even this limited change has severely impacted the river and groundwater levels. As anthropogenic pressure increases, the proposed project promises to worsen the situation by taking away large swathes of forests from this troubled region, while also challenging the first rights to the river of those living upstream,” said Agarwal.

During the SC-NBWL’s meeting in August 2016 when the project got a go-ahead, the National Tiger Conservation Authority had expressed concern about the loss of 105 square kilometres of tiger habitat because of submergence and fragmentation and recommended to integrate three wildlife sanctuaries – Nauradehi, Rani Durgawati and Ranipur – with the Panna tiger reserve.

“All the three WLS proposed above for integration with PTR do not have secure corridor/habitat connectivity with PTR,” said the CEC report, noting that the proposed connectivity of the PTR to the three sanctuaries mostly pass through densely populated and cultivated areas.

The CEC added that the Ken-Betwa project will destroy the most successful tiger reintroduction programme launched in PTR.

As per CEC, the mitigative measures suggested by NTCA and the NBWL’s standing committee “do not address the loss of the special and unique ecosystem of gorges, rocky cliffs and riverine flora and fauna on either bank of the river Ken.” It said that the wildlife including microflora and fauna which have evolved in this ecosystem will, on commissioning of the project, perish forever.

“The SC NBWL has failed to appreciate the fact that more than 4,400 hectares of the core of the Panna National Park will get submerged on the execution of the project. The national parks are the geographical areas on earth surface having unique floral, faunal and morphological significance and are areas set apart for the evolution process to proceed unhindered by human interference. Shifting of national park boundaries will result in disruption and disappearance of millions of years of evolution progressing in the unique ecosystem along river Ken especially in gorges, caves and cliffs” CEC emphasised.

The CEC emphasised that the PTR is a national park and has been notified for the protection and conservation of the entire ecosystem including all plants and animals and not just tigers. It said the project in the present form does not take into account the loss of vulture, ghariyal and other flora that will occur due to the project. It has all the features of a mega hydel project within the national park and tiger reserve and lacks any feature of a river-linking project.

“lt, therefore, poses a serious challenge to the very objective of the legislature in enacting the Wildlife (Protection) Act, 1972 and Forest (Conservation) Act, 1980 to provide protection to the wildlife and the ecosystem in which they co-exist,” said CEC.

“Further cutting of about 23 lakh trees from a national park is no mean loss. No amount of compensatory planting can recreate existing riverine and forest ecosystems,” it said. 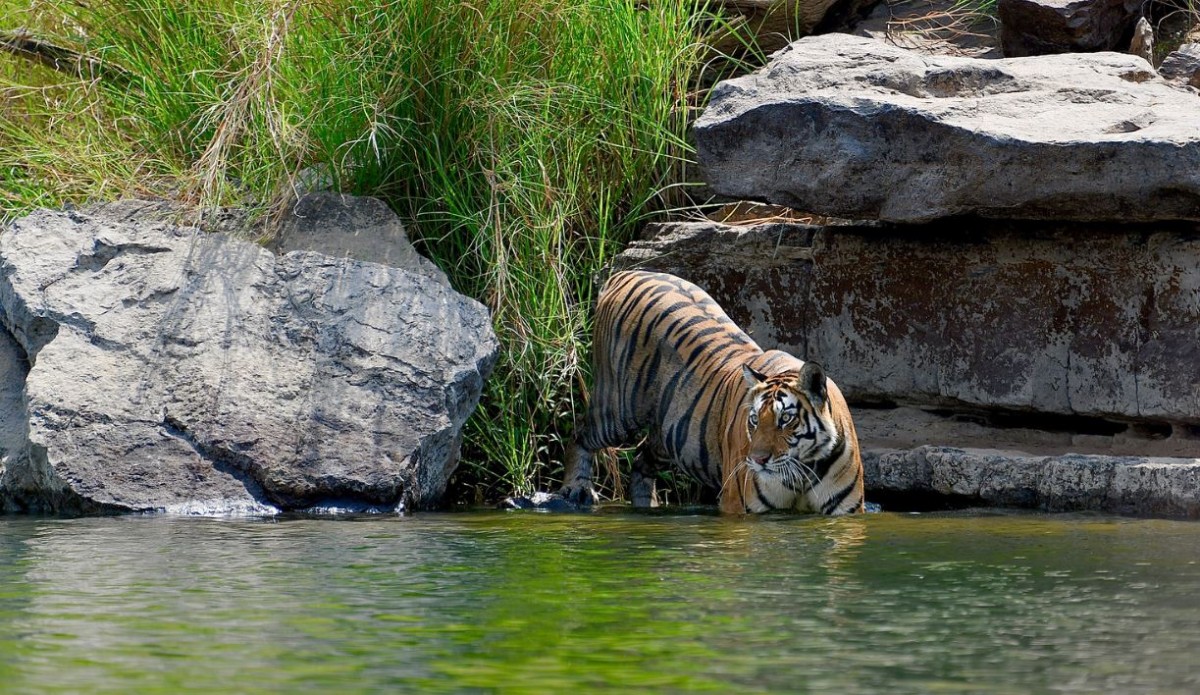 “The CEC report clearly establishes that it is not only ecologically disastrous to destroy 104 square kilometres of Panna National Park, but the fact that such an activity is not permissible under the provisions of the Wildlife (Protection) Act, 1972. The project was approved by the NBWL, despite the fact that it had no jurisdiction to even consider the project. In addition, the CEC has said that the project will not solve the water problem of Bundelkhand at all. Importantly, the CEC has clearly held that the damage will be irreversible in nature,” Dutta told Mongabay-India.

In its report, the CEC noted that during the monsoon, the flow of water with silt is essential for the survival of the (Ken) Ghariyal Sanctuary located downstream of proposed Daudhan Dam.

It explained that the ecological flow of water from the dam will not be carrying any silt because the water which is being released downstream is only after sedimentation of silt within the reservoir.

“The massive engineering structure of the dam is bound to isolate the upstream aquatic fauna of Panna National Park and this may have a direct impact on the breeding habits of aquatic life forms both upstream and downstream of the dam. The construction of the dam will result in substratum and which in turn will result in the drastic conversion of aquatic habitat thereby changing the whole ecosystem within the Panna National Park as well as downstream of the dam,” said CEC while warning that this situation may lead to “extinction of many aquatic forms of life.”

It also recommended that the alternatives to meet the objectives of the proposed Ken-Betwa project are examined through specialised agencies having expertise including in arid zone agriculture, soil and water conservation.

However, Himanshu Thakkar of SANDRP said that the “findings of the CEC, warranted stronger recommendations for the project, its environmental impact assessment and hydrological assessment, for NBWL, NTCA and for the environment ministry and its environment and forest (clearance) appraisal process.”

“We hope that the official agencies do not use CEC’s recommendations as a route to justify the unjustifiable Ken-Betwa project,” Thakkar said.

The article was originally published on Mongabay India. You can read it here.