With the water bodies shrinking in size due to encroachment and in depth due to siltation, Kashmiri livelihoods are at stake. 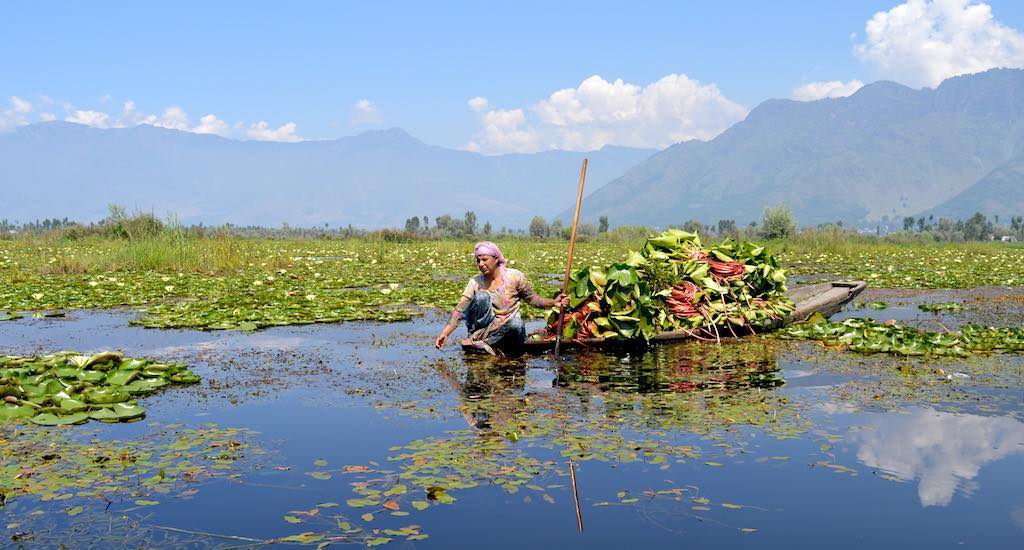 Fishing and other rural communities that have traditionally depended on Wular Lake are now struggling to earn a living from it, as shrinkage, siltation and ecological degradation take a toll on Kashmir’s largest flood basin. Credit: Athar Parvaiz

When 67-year-old Mohammad Subhan Dar fished in Wular Lake in his youth, fish were abundant in the expansive lake tucked in the lap of lush green mountains in north Kashmir’s Bandipora district. The fish, Dar and other villagers said, have almost vanished now.

“As compared to the past, fish turnout in Wular has gone down considerably,” Dar told VillageSquare.in. Earlier a fisherman could catch up to 15 kg of fish in a single day. “These days if a person catches even five kg in a day, we call him the king of Wular,” said Dar.

For thousands of Kashmiris living on the fringes of its water bodies, fishing, besides collection of water chestnut and fodder have been their sources of livelihood for a long time. But with the water bodies shrinking in size due to encroachment and in depth due to siltation, their livelihoods are at stake.

According to a study by Wetland International, 32,000 families including 2,300 fisher households living on Wular’s shores depend on it for livelihood. In Dar’s village, 600 fisher families live off Wular’s resources.

“Kashmir’s water bodies such as Wular, Mansbal, Dal lakes and Jhelum have served the people since ages as sources of livelihood and served the region ecologically,” Masood Hussain Balkhi of Sher-e-Kashmir University of Agricultural Sciences and Technology told VillageSquare.in.

His colleague, Farooz Ahmad Bhat said that the total annual fish production of the region is 20,000 tons. Quoting statistics of Kashmir’s fisheries department, he said that more than 30,000 people are directly involved in fishing, 14,000 of them with registered licenses.

Bhat, however, said that fish diversity and fish production in Kashmir region has shown sharp decline over the past few decades. “Some of the local fish species have even become endangered and threatened,” he said. The major causes of this decline are encroachment of water bodies, siltation and pollution.

According to revenue records, Wular is spread over an area of 130 sq. km but has undergone massive siltation, encroachment and pollution in recent years. 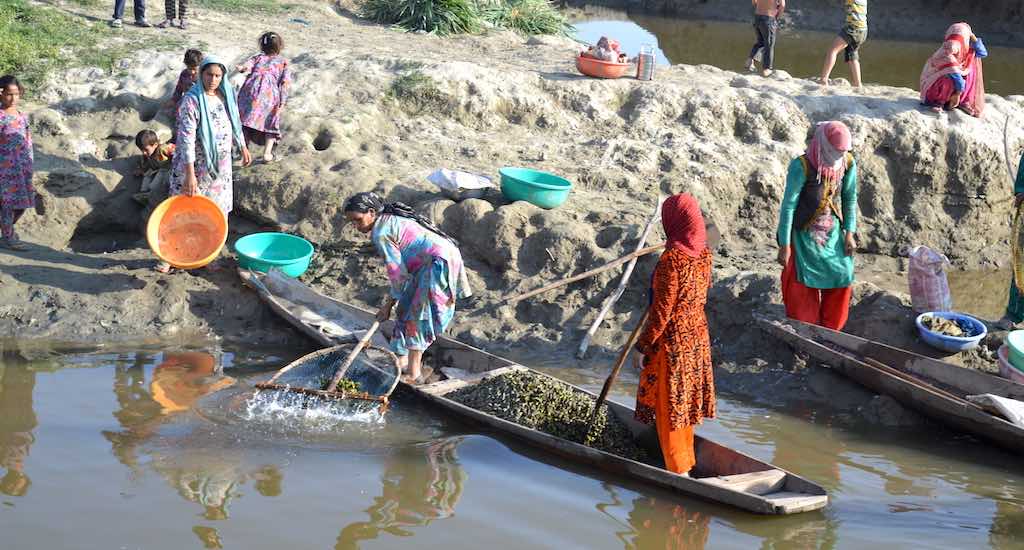 Women washing water chestnuts at the shore of Wular lake in Saderkote after a day-long collection. Credit: Athar Parvaiz

Like fish, chestnut yield from the lake has diminished abysmally, as Dar and his fellow villagers observed. “Earlier, a person could collect a boatful of chestnuts, about 60 kg in a few hours. But, these days, one can only dream of such a good harvest,” Dar said. According to him, 20 kg is the maximum a person can get now, despite toiling the whole day.

Shameema Bano, 45, leaves home just after daybreak and returns in the evening. Yet she manages only 18-20 kg of chestnuts, which fetches her around Rs 280 a day. “It takes me a lot of time and hard work,” Bano, who lives in Banyari village on Wular’s banks, told VillageSquare.in.

“But, despite this hard work, I have no complaints except the fact that chestnut availability in the lake has gone down,” she added. “The money I earn from chestnut collection enables me to fulfill my personal needs and the needs of my children even after sharing most of my earnings with my husband.”

People said that Wular has always fulfilled their financial needs through its produce, which have started diminishing now. Ghulam Nabi, 63, said that he has never seen such a decline in water chestnuts in his life. “It’s mainly because water doesn’t stay that long in the lake these days. Now we hardly get enough rains in summers unlike in the past when it used to rain frequently,” he said.

Elderly people like Nabi and Subhan Dar of Saderkote recall their childhood days when Wular’s water was pure and pristine. “We used to drink taking the water directly from the lake. Now we hesitate even to bathe in it because of the heavy pollution,” Dar told VillageSquare.in.

According to Dar, the lake has now reduced in size and vast stretches of the lake remain dry most of the year. He said that Wular looks like a lake only in spring when the rainwater and glacial meltwater flow into it. “For the rest of the year, most of it turns into pasture lands and swamps,” Dar observed. “We literally haul our boats up because of lack of water in the lake.”

Zona Begam of Asham village at Jhelum’s bank is educating her three daughters. “Until last year, my husband had a steady income as he was serving as a forest guard. Now he has retired and draws a meager pension. He goes for fishing, but returns with just one kg at times,” Begam said. “Though we manage with what we get, we fear that the fish might vanish altogether.”

Abdul Rashid Dar of Saderkote said, “I draw all the fodder (khor) for my two cows from Wular. The cows give me 20 liters of milk every day. I sell 18 liters and earn Rs 500 daily. I am happy with what I get as I earn money by collecting chestnuts also.”

But he is worried about the way the important water body is being treated by people and the government. “The government is spending a lot of money for protecting this lake. But, I somehow feel the money is not spent properly,” he alleged.

Shiraz Ahmad Goroo, a fisherman from Sumbal in north Kashmir’s Bandipora district also complained about dwindling fish in Jhelum. He said that he is not able to catch as much as his father did. Showing his meager catch, Goroo said, “This won’t fetch me enough money to feed my family. The prices of fish have gone up. I sell a kilo for Rs 200. But it’s hard because the fish have vanished.” 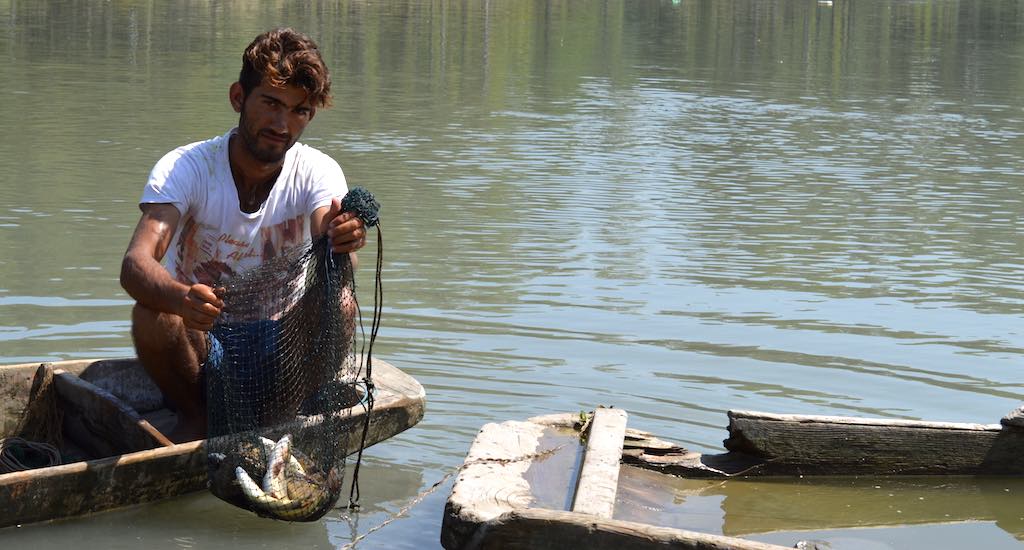 His fellow fisherman, Shabir Goroo, said that a fisherman earns around Rs 300 a day. “If it continues like this we may have to work as laborers,” he said and added that sand mining in the river has also caused a decline in fish numbers.

Wular, which was designated as a wetland of international Importance under Ramsar Convention in 1990, is one of the largest freshwater lakes in Asia and the largest flood basin of Kashmir.

“I am worried about the future of the lake because the survival of my family is entirely dependent on it. The lake provides me the means to earn money, with which I educate my two sons,” Goroo said and hoped that Kashmir’s natural assets are protected.

The main reason for Wular losing its erstwhile glory is the heavy siltation in the lake, said Manzoor Dar, a fisherman of Saderkote. “If the government takes steps to prevent further siltation of the lake and takes away the silt which has already settled in, I’m sure Wular will not only get a new life, but will also give livelihood support to far more people than it currently does,” Dar, selling cooked fish to those visiting the lake, told VillageSquare.in.

The Jammu & Kashmir government has charted out a program for the conservation of the lake. Irfan Rasool, a forest conservator, who looks after the lake restoration work being carried out by the state government’s Wular Conservation and Management Authority (WUCMA), said that the lake would soon be de-silted.

There are plans to remove over two million willow trees from the lake, to achieve hydrological and ecological balance. According to elderly fishermen such as Subhan Dar and a study by Wetland International, willow plantation in the lake through government-sponsored schemes in the 1970s has led to fragmentation of the wetland, rapid siltation and deterioration in water quality.

But, Shakil Romshoo of Kashmir University’s Earth Sciences department strongly advises taking measures like stopping the silt at source if Kashmir’s wetlands have to be conserved. “For that the government needs to start an extensive afforestation program in the catchment areas of River Jhelum’s tributaries (Jhelum feeds the Wular Lake) immediately,” Romshoo told VillageSquare.in.

“We are starting the work as part of the Rs 4,000 million Wular Conservation Project in September this year,” Rasool said, and added confidently that WUCMA was on its way to conserving the lake “for all times to come.”

This article originally appeared on VillageSquare.in.