This the highest amount of rainfall the state has recorded in 118 years. 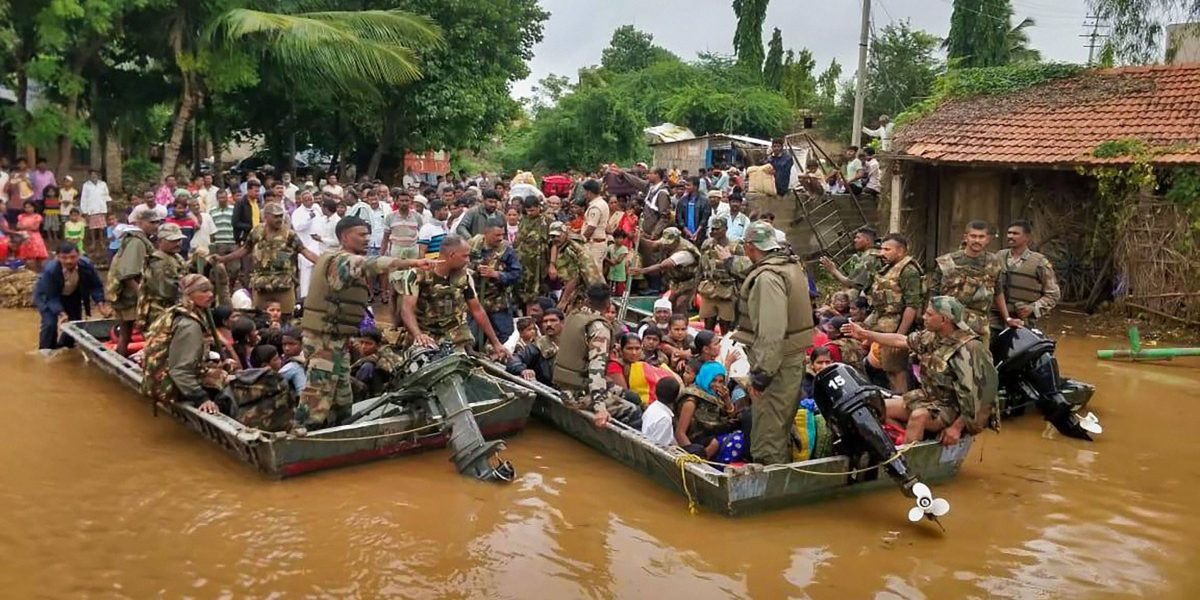 Army personnel carry out rescue operations in a flood-affected area in Belgaum, August 9, 2019. At last count, nearly 44,000 people have been evacuated from flood-hit and rain-affected areas of Karnataka where the rain fury has left nine people dead in the past few days. Photo: PTI

New Delhi: Karnataka received a record 279% more than normal rainfall between August 3 and 10, according to a report in the News Minute.

This the highest amount of rainfall the state has recorded in 118 years.

The heavy rainfall and floods have claimed the lives of 62 people while 14 others are missing, according to data released by the chief minister’s office(CMO).

It has been estimated that damages worth Rs 40,000 crore have been caused by the floods with 4.7 lakh hectares of crops reportedly affected by the rains while 18,000 km of roads, 650 bridges, 58,620 houses and 54,000 electric poles were also damaged. Floods and landslides struck three coastal districts of Uttara Kannada, Udupi and Dakshina Kannad in Karnataka and four Malnad districts of Kodagu, Chikkamagaluru, Shivamogga and Hassan.

The unprecedented amount of rainfall led to a high inflow of water into the Krishna river, leading to floods and landslides in the northern districts of Karnataka. “The inflow is one of the highest recorded in the state,” an official from the Karnataka State Natural Disaster Monitoring Centre (KSNDMC) told the Newsminute.

On Friday, Karnataka chief minister B.S. Yediyurappa appraised PM Narendra Modi about the situation of the flood-hit areas in Karnataka.

Previously, Yediyurappa had asked the Deputy Commissioner of Dakshina to release Rs 10,000 immediately to each of the families who had lost their houses and had briefed Union home minister Amit Shah about the rescue operations.

On Thursday, the Indian meteorological department (IMD) had issued a red alert in south Karnataka as schools and colleges were been ordered to remain shut till Saturday.

According to a report in NDTV, last Sunday, the Indian Navy undertook aerial rescue and relief operations in North Karnataka’s Belgaum district. The naval helicopters rescued 26 stranded citizens and delivered around 800 kg of food and drinking materials to areas facing acute shortage of the supplies.

Around four lakh people have been displaced across the state due to the heavy rainfall and subsequent floods and landslides. The Yediyurappa government has proposed relocating displaced people from around 200 villages and has sanctioned Rs 10,000 for each family, Rs 1 lakh for house repair and another Rs 5 lakh for the construction of a new house.

The KSNDMC has predicted some moderate to scattered rainfall over northern parts of Karnataka over the next 2-3 days.