Farmers in Jharkhand are offering a host of services to help local smallholders move beyond subsistence agriculture towards increased incomes. 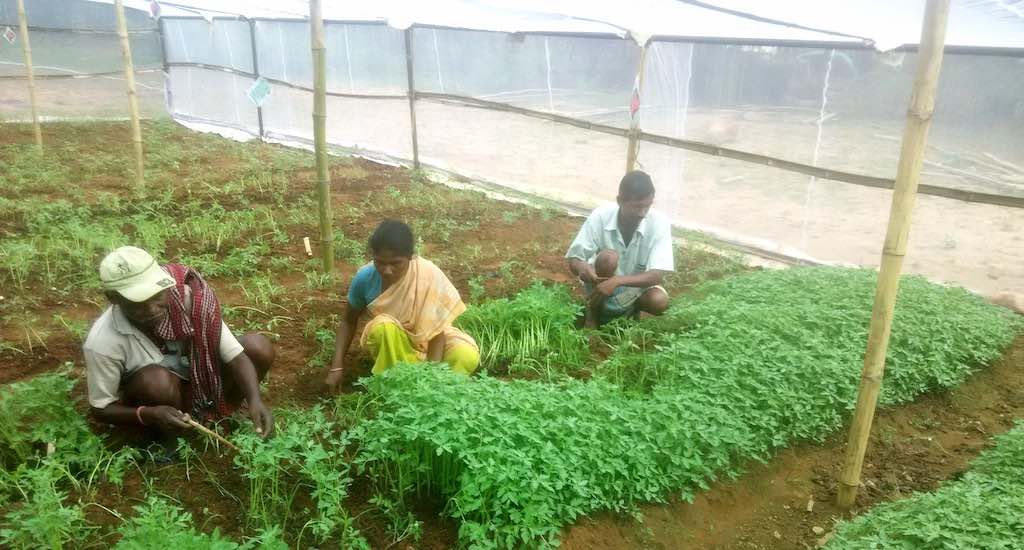 Farmers tending to a vegetable nursery in Gumla district of Jharkhand. (Photo by Ashok Kumar)

In the first week of July, Birla Khariya from Silam village in Jharkhand was busy planting robust tomato seedlings in his fields. He had bought 3,500 seedlings from Michael Ekka, who runs a vegetable nursery in a nearby hamlet. Earlier, Khariya used to buy a 10 gm pack of seeds to grow his own seedlings; but since last year, he has been purchasing seeds from Ekka’s nursery.

“Seedlings from Michael’s nursery are resilient, treated and of genuine varieties,” Khariya told VillageSquare.in. “Apart from seedlings, the other farm inputs are also available at Michaels’ place on easy credit.” Khariya finds it convenient; it also eliminates the risk of nursery failure.

Reduced risk and the convenience of getting many services at their doorsteps have enabled farmers like Khariya from Raidih block of Gumla district to gradually increase the area under vegetable crops. This has encouraged agricultural entrepreneurs like Ekka to introduce more services and innovative ideas that not only help their business but also help the farmers earn more.

Raidih is an administrative block in the Southwestern part of Gumla district in Jharkhand. Raidih is home to about 13,600 families, 65% of them being tribal people, as accounted by the Gumla District Census Handbook – 2011. Around 10,000 families have landholding of less than two hectares (ha).

Of the 30,500 ha of cultivated area, only 6% is irrigated. This implies that rain-fed rice cultivation is the main source of livelihood for the residents of Raidih block. The area gets about 1200 mm of rainfall every year spread over some 70 days of rain. Depending on rain-fed farming makes residents of Raidih practice only subsistence farming.

This and the absence of non-farm enterprises force them to migrate to distant cities in search of jobs. The younger generation also finds farming an unpredictable occupation and feels that cities hold better opportunities for them. Despite the capricious agricultural production system, migrants return home during the rainy season to cultivate their fields. Clearly, they have an affinity towards farming and want to live at home.

Located at around 650 m above sea level, Raidih enjoys a mild climate. With a rolling topography and well-drained soil, it has a huge potential for subtropical crops, including vegetables, even in rainy season. This unique biophysical feature holds a good prospect for smallholders.

During the rainy season, the surrounding agriculturally progressive areas of West Bengal, Odisha and Bihar are inundated and vegetables cannot be grown. Sensing this opportunity, some farmers started growing vegetables with support from organisations such as PRADAN (Professional Assistance for Development Action), a grassroots organisation. As vegetables are in demand during the monsoons, the farmers find a good market.

Michael Ekka in his 40s is an active farmer from Silam Patratoli village of Raidih block. He is eager to learn and adopt new things in agriculture and has a general concern about the socioeconomic condition of his fellow villagers. Michael is supporting villagers to move towards prosperity from farming by becoming an agricultural- entrepreneur, or agripreneur. 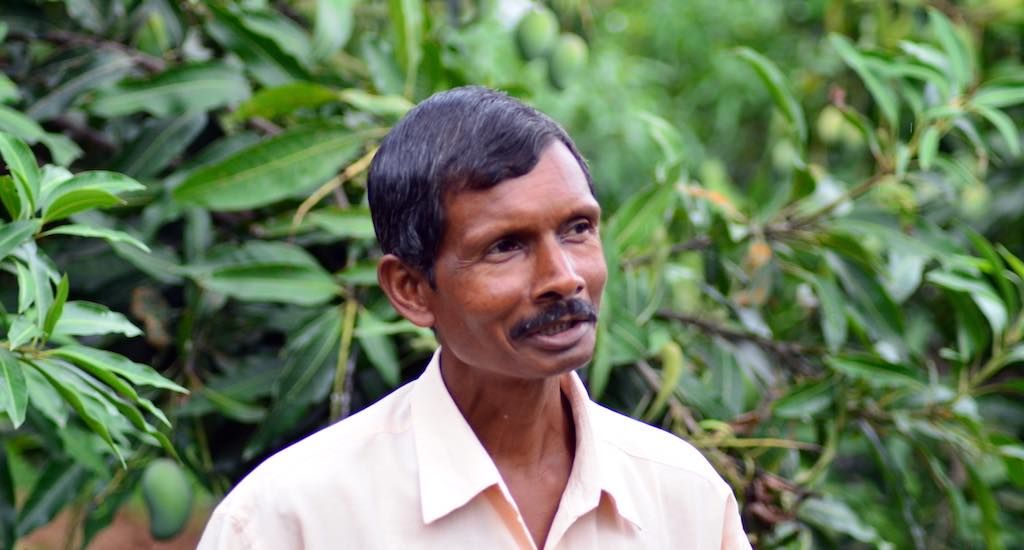 An agripreneur is like a one-stop shop in the village. He provides agricultural inputs, high-quality vegetable seedlings, mechanised ploughing devices like power tillers, small credit for farm inputs through microfinance institutions and information related to farming, besides facilitating collective marketing of vegetables and mangoes. This monsoon, Ekka helped 180 farmers grow vegetables for markets as far as Ranchi and Rourkela.

Michael was identified by the women’s self-help group (SHG) of his village to take part in the agri-entrepreneurship program run by Transform Rural India (TRI), in collaboration with Syngenta Foundation India. Michael participated in several training programs on agriculture technology, achievement motivation, and business management among others. The training helped him build his perspective around agriculture, and he could see the opportunity for an enterprise around aggregating inputs demand and output marketing from the local area.

Michael understands that creating an ecosystem around the smallholders is important to sustain them in gainful farming. The rural tribal areas are acutely deficient in products and services required for profitable farming. The present scale and diffusion of agriculture technology is not attractive for conventional markets. Local entrepreneurship is essential to aggregate the demand and supply of farm inputs, services and outputs. It has to sustain the agripreneur, as well as help him stay competitive in the local market.

Commitments are major challenges that Michael faces. Sometimes farmers do not take delivery of the ordered inputs or seedlings. When prices of produce are low, farmers dump the produce at Ekka’s place, but when prices are high, they sell directly in the markets. After Ekka started taking advance for supply orders, the issue of farmers not taking the ordered inputs has reduced.

Providing assured supplies is still a challenge, but with increasing area under production by farmers, it is slowly being solved. With increased production, the quantity of produce is beyond a farmer’s capacity to sell in the local market. So they rely on people such as Michael. Simultaneously, he tries to aggregate and market other local produce like jackfruits, mangoes and rice to keep his revenues right.

Being closely associated with Mahila Vikas Mandal, an SHG federation, Michael was aware that his village is in a kharif tomato production cluster. More than 300 farmers around his village grow kharif hybrid tomatoes. So he started a nursery in kharif of 2016, producing 50,000 tomato seedlings. He used a bamboo frame structure with mesh nylon net to protect the seedlings from heavy downpours, insects and stray animals.

The demand for seedlings outstripped supply. Subsequently, he produced two batches of seedlings for vegetables like cabbage, cauliflower, chilli and eggplant, booking a profit of about Rs 50,000 this year. His efforts drew the attention of the district agriculture department, and he bagged a commercial greenhouse for flower cultivation, where he grows gerbera. Michael also applied for and successfully obtained a seed and fertiliser dealer license.

In 2017, sensing the demand, Michael expanded his business, producing chilli and brinjal seedlings in kharif, besides the tomato. He also got power tillers and mechanized paddy thrasher from the village organisation and started lending services. His seed and fertilizer shop is also doing well, the turnover by July is more than Rs 70,000. From selling paddy seeds and fertilizers, he expects to make about Rs 30,000 by the end of the kharif season. The first batch of 60,000 seedlings was sold out and he was preparing the next batch.

In the summer of 2017, he provided collective marketing services for mangoes. Michael supplied mangoes to Ranchi and charged Rs 0.30 per kg from the farmers. The farmers were happy because the price was good, weighing was accurate, and it was a doorstep supply facility. For efficient marketing services, Michael has 250 plastic crates at his centre for grading of produce, transparent weighing and easy transportation.

There are 22 such agripreneurs offering services similar to Michael’s. In addition, they anchor access to micro-irrigation. They are opening new frontiers like introducing kharif onions and flowers in their area. There are another 69 people in the process of becoming agripreneurs in three administrative blocks of Jharkhand.

Attracted by this rewarding enterprise, Michael’s son has joined him in this journey of driving prosperity in the local area. “My son has returned home from Himachal,” Michael told VillageSquare.in happily. His son takes active interest in the farm equipment lending centre and the vegetable nursery business.

This article was originally published on the VillageSquare.in. Read the original article here.