Is Survivor Bias Messing With Our Impression of South India's Groundwater Crisis?

Women fetch water from an opening made by residents at a dried-up lake in Chennai, India, June 11, 2019. Photo: Reuters/P. Ravikumar/File Photo

In June this year, many parts of Chennai witnessed acts of violence. Neighbours turned against each other, there were reports of physical assault and even offices and schools were shut down. The reason – severe scarcity of water due to depletion of groundwater levels.

Several studies over the past few years have been talking about groundwater stress and depletion in the north and east India. In contrast, water levels are reported to be rising in south India. Tejasvi Hora, Veena Srinivasan and Nandita Basu, authors of a recent study, ‘The groundwater recovery paradox in South India’ published in Geophysical Research Letters, have tried to explain this disagreement by highlighting methodological limitations in conventional long-term trend analyses of groundwater levels.

Madness in the method

The conclusions of most studies on rising groundwater levels in south India are based on various methods, which include satellite observations such as those made by the NASA Gravity Recovery Climate Extraction (GRACE) satellites, water-level measurements in groundwater monitoring wells, and global hydrological models. “The problem is that these findings contradict on-ground field reports and farm surveys that report increasing well failures during the same time period,” said Basu, associate professor, civil and environmental engineering, earth and environmental sciences, University of Waterloo, Canada. 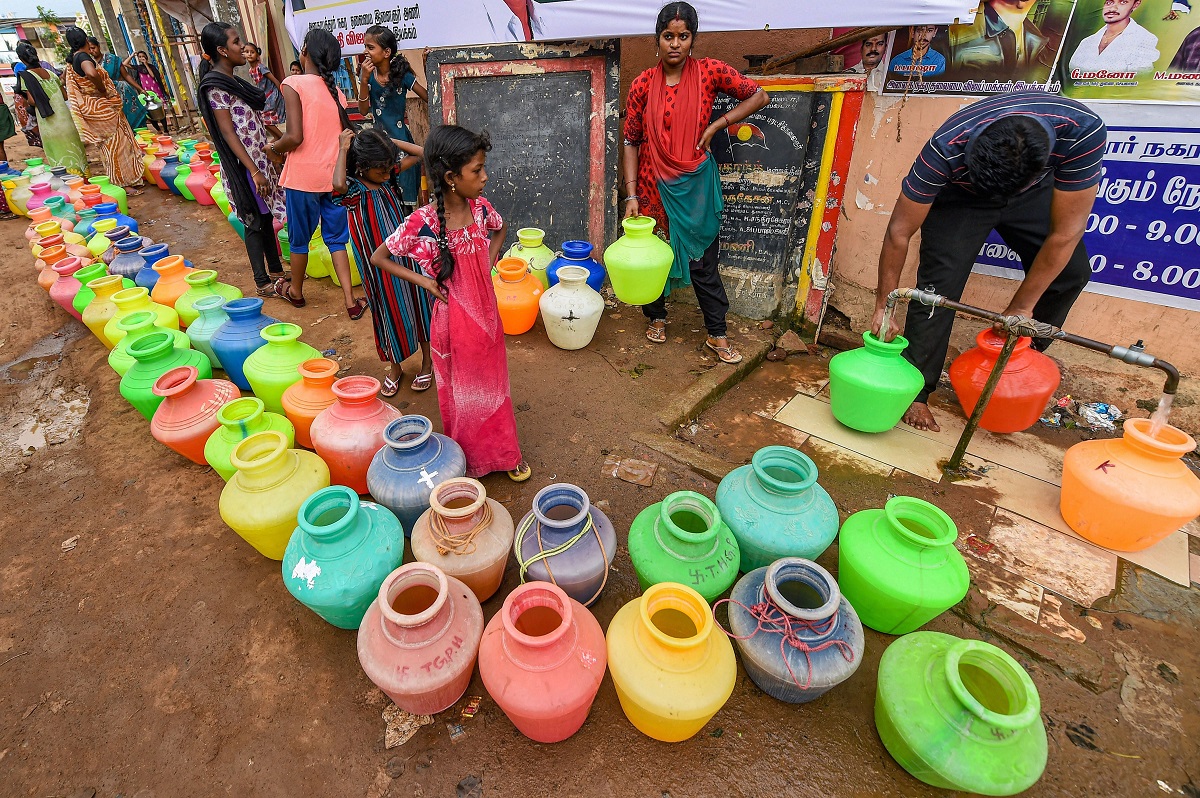 The authors find that traditional groundwater trend assessment methods are not suitable for hard rock aquifer systems that characterise south India. “There are broadly two groups of aquifers in India – alluvial aquifers (think beach sand) and hard rock aquifers (fractures in solid rocks that hold water). Alluvial aquifers are relatively homogeneous,” said Basu, and the water table is continuous – so what is measured in a well at one location is representative of a large area. In contrast, hard rock aquifers are heterogeneous, which means that some rocks have more fractures, while some have less. “So, you can have water pockets as well as a lot of dry areas,” she added.

While the GRACE analysis provides an excellent estimate of regional trends in groundwater depletion, the authors highlight its limitation in lack of information on local depletion hotspots. This becomes especially important in a highly heterogeneous, hard rock aquifer system that is found in south India. The metrics used by the authors, on the other hand, are based on “missing data” and thus can be more suitable than water level data in these areas or should be at least used in conjunction with water level data, they say.

According to the authors, the absence of data tells a story. If a well has too many ‘missing data’, it means that the water table is going below the well screen, wells are dry, and farmers are affected. Most analysis ignore the wells with missing data and instead focus on the wells with the most complete dataset. “One reason these wells may have such a complete dataset is that they might be in water pockets that are common in hard rock aquifers,” said Basu.

What stories missing data can tell

One of the clear indicators of depletion is visible in the trend of farmers switching from shallow to deep wells. “Interestingly, when the wells are not segregated by depth, the median water level trends in all wells more closely mimic that of the shallow wells, given the more extensive network of shallow wells. This explains why previous studies, which did not segregate wells by depth, found an increase in water levels in south India,” reports the study.

The authors’ analysis of groundwater level data highlights two critical points. First, there are significant depth variations in water level trends in a multi-aquifer system that characterises the Indian subcontinent.

Explaining the depth variations, author Tejasvi Hora, PhD candidate, University of Waterloo, said, “In the subsurface we have different aquifer systems – think of them as different vertically stacked boxes that store water, and they can sometimes be connected and sometimes be disconnected. Groundwater wells are screened to access different boxes – one of these boxes can be empty while another might have water. When you put all the information together you miss the nuance about things that are happening.”

Thus aggregating information with depth conceals critical trends and stresses in the aquifer system. Second, in shallow, hard rock aquifer systems, a large fraction of the wells has apparently non-significant trends (showing no change); critical information is missed by not considering them.

The paper also highlights the issue of missing data in well records, which the authors explain can occur in two ways: (1) the well goes defunct and stops collecting data permanently during the analysis time-frame, (2) the well records no data in multiple intermediate months within the time frame.

The underlying cause of such missing data can be either physical, where the water level in the well falls permanently or temporarily below the well screen depth, or, logistical, where operators neglect maintaining monitoring wells, or they collect or record the data inadequately. “It is important to see how wells are drying up. The rate at which wells are drying up might give us important information about groundwater stress in a region.

Traditionally, we have only looked at water levels and how fast they drop to assess groundwater stress, and threw out well information as soon as they went dry. We need to change that mindset,” said Hora.

Adding to that, Basu explains further, “This conundrum can be explained using the concept of survivor bias (survival bias is the logical error of concentrating on the things that made it past some selection process and overlooking those that did not, typically because of their lack of visibility. This can lead to false conclusions in several different ways). The central idea with respect to groundwater is that we are trying to understand the state of groundwater reserves by measuring water levels at specific locations. When we throw out wells with a lot of missing data and focus only on wells that “survive”, we miss out a critical piece of the story. What is traditionally considered ‘bad data’ is actually ‘good data’.”

By applying this new metrics, the authors observed, on an average, an increase in dry wells at a rate of 104 wells/year in south India, with higher percentages in the drought period of 2002-2003 and found that nearly 93% of the defunct wells (with at least eight years of data) had either a significant negative trend or no long-term trend.

“This means that our original hypothesis that dry wells are indicative of groundwater stress is correct. If you look at all wells that went defunct (stopped collecting data permanently sometimes within the 1996 – 2016 time frame), we find something interesting. We find that 93% of these wells had negative or no trends – this means they were already declining, or somewhat oscillating between dry and wet years before they went defunct.

The wells that go defunct are traditionally taken out of analysis. So, we are saying that wells with declining or no significant trend are taken out of traditional data analysis, while wells with increasing wells are retained preferentially within the dataset. This is survivor bias,” concludes Hora. 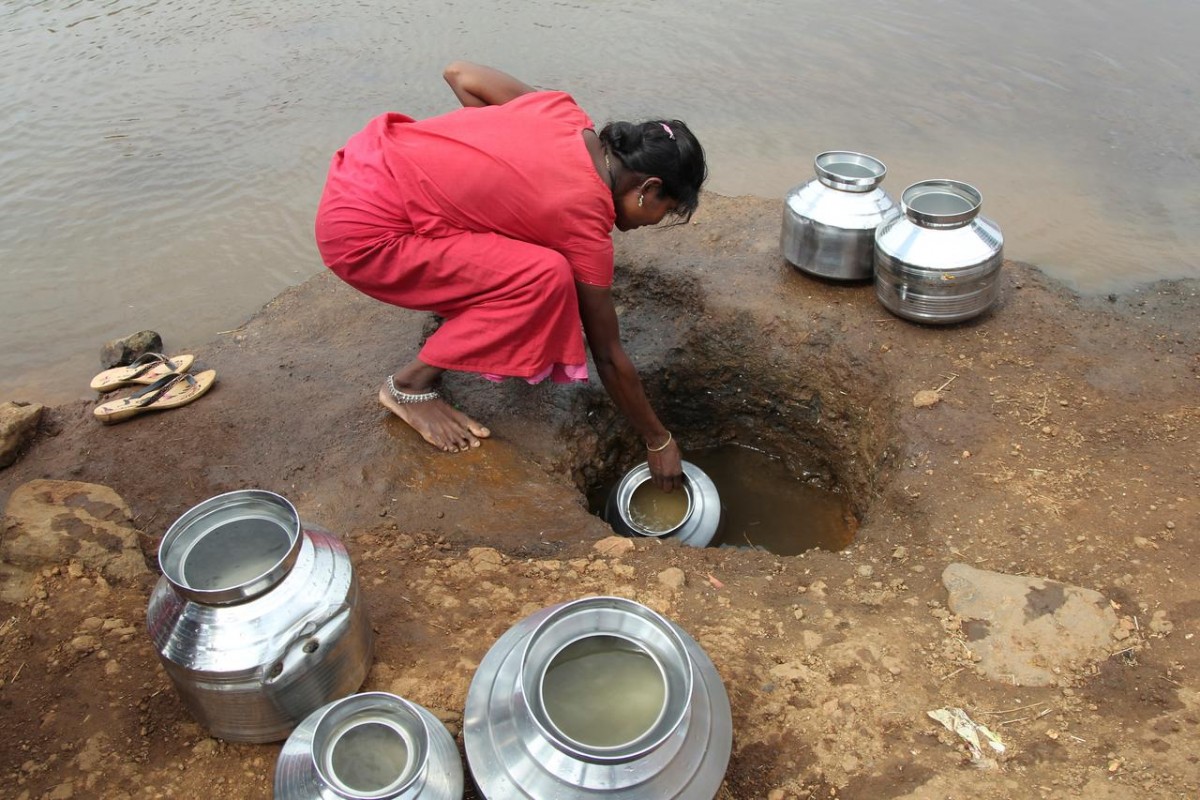 A woman fetches water from an opening made to filter water next to a polluted lake in Thane, India June 13, 2019. Photo: Reuters/Prashant Waydande

The authors included both pre- and post-monsoon analysis and observed the same pattern. “More rain is always better, no doubt about that. There are two types of groundwater – one that is older groundwater (fossil water) that have built up over centuries and provide us with a source of water when there is no rain, and thus reduce our vulnerability to rain. The other part is newer water that is completely driven by how much rain we are getting. Over-extraction of groundwater is rapidly decreasing this ‘older’ groundwater and taking away from us the buffer store during dry spells. That’s a serious concern,” opines Basu.

Insisting on application of better methodology in groundwater assessments, for long-term sustainability, the authors recommend improved regulations to help meet local demands for groundwater in a more sustainable manner. This, they suggest, should include interventions promoting the conjunctive use of surface water from rainwater harvesting structures and groundwater, along with policies that change the current structure of agricultural power subsidies.

Also read: A Response to the Questions About Groundwater Data in NITI Aayog’s Water Report

Talking about the groundwater crisis and the case of missing data, water conservation expert, Vishwanath Srikantaiah shares his point of view. “The understanding and modelling of groundwater in hard rock, heterogeneous hydro-geology is a wickedly complex one,” he said. It is broadly understood that the granularity of data currently obtained is insufficient to be accurate. Survivor bias may or may not influence the correctness of the data. It is an interesting hypothesis but am sure much more work needs to be done. For now it seems to be more an academic exercise because the felt experience of many agriculturists is the real impact on the ground. A much more participatory agglomeration of universal data sets would be of greater relevance for understanding the groundwater situation in India.”