Mumbai and Delhi Generate Most Solid Waste Among Metro Cities

Mumbai and Delhi generate about 11,000 and 8,700 tonnes of solid waste per day, respectively.

India’s financial capital, Mumbai, and the national capital, Delhi, are the country’s top two metro cities when it comes to solid waste generated per day. Together, it is estimated, they generate nearly as much waste as the next eight metro cities on the list.

According to the estimates of the Central Pollution Control Board (CPCB), Mumbai and Delhi generate about 11,000 and 8,700 tonnes per day of solid waste respectively.

With the national-level focus on waste, particularly single-use plastic waste, and the national government’s campaign on Swachh Bharat (Clean India), waste management over the past few years is reflected significantly in the political narrative. But as broom-wielding politicians demonstrate a message of clean India in the media, their own backyard continues to be a ticking time bomb of waste. A strong movement by citizens or action by local governments is still not seen in Delhi or Mumbai, the major solid waste generating cities in India.

On October 7, 2019, the Indian National Congress-Nationalist Congress Party (NCP) alliance released their joint manifesto for the Maharashtra elections. They promised proper waste management with comprehensive policy measures as well as budgetary support. The manifesto promised scientific disposal of waste, prevention of pollution from waste and encouraging for the concept of reduce, reuse and recycle. 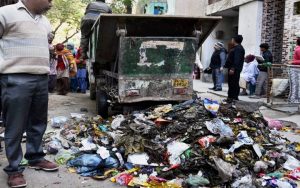 Garbage scattered near a housing settlement in Mumbai. The region tops the list of metros in terms of solid waste generated every day. Photo: PTI

Stalin Dayanand, a conservationist and activist with Mumbai-based environmental NGO Vanashakti, said issues like waste management have been overlooked by governments deliberately because there is so much money involved in waste management budgets.

“The budget gets bigger and bigger when more waste is generated. There is no incentive to reduce it. Instead, the municipal corporations hand out contracts. So, why will someone stop it? Whether it is Delhi or Mumbai, there is no ward-wise estimation of waste. A waste audit has to be done in every ward to understand what are the problems of that ward. There needs to be an incentive for less waste. There needs to be a carrot and stick policy,” Stalin said.

He stressed that the amount of waste that was expected to be generated by Mumbai in 2030 has already been achieved 10 years before the expected date.

Also read: Will India Need a Landfill the Size of Bengaluru By 2030?

The Union Ministry of Environment, Forest and Climate Change (MoEFCC) had notified the Solid Waste Management Rules, 2016 notified in April 2016 but so far their implementation remains non-satisfactory.

The main dumping sites of the city include Deonar, Gorai, Mulund and Kanjurmarg. Of the four, the sites at Gorai and Mulund have been closed. These sites which have high population density near them have also faced severe protests from political parties (opposition), locals and environmentalists stating that it could be a serious health hazard.

What adds further to the problem is that these sites are in the thickly populated areas of the city, they have no facility for segregation of the waste and already are reaching capacity.

“The landfill sites as per the rules should have been kilometres away from the nearest human habitation but there they are next to housing colonies. The entire area is enveloped in the stench. People are being treated like pigs and made to live in horrible conditions. The money involved in waste management in Mumbai itself is in the range of Rs. 80-100 billion (Rs. 8,000-10,000 crore) and that kind of money has its own power play,” Stalin D. added. 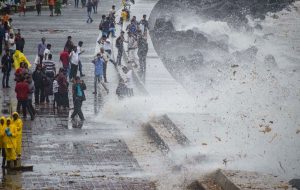 A report of the Maharashtra Pollution Control Board notes that the “leachates generated from the dumping ground are not collected properly and untreated leachate directly finding its way to creek/sea through nalla.”

Environmentalist Rishi Aggarwal said waste management is one of the easiest of our environmental issues to solve.

“If you look at burning issues like Aarey, coastal road, metro train or bullet train in Maharashtra right now they are inevitably a clash between development and environment. But waste management is one area where you cannot term anyone speaking for better waste management as anti-development.  Yet, what we see on the ground is baffling that one of the simplest issues are not being resolved,” said Aggarwal.

India’s national capital has three waste dumping sites – Bhalswa, Ghazipur and Okhla – and among them, the Ghazipur dump is already in running to be taller in height than national monuments like Qutub Minar and Taj Mahal. Bhalswa and Okhla have already been declared exhausted but the untreated waste is still being dumped there with no other place to go.

In August 2018, a parliamentary committee in its report had remarked that “the laissez-faire of the civic bodies of Delhi also gets reflected in the fact that the height of Ghazipur landfill site has reached as high as 65 metres which is just eight metres less than the height of the national monument Qutub Minar.”

In June 2019, a municipal official had remarked Ghazipur landfill is likely to dwarf the Taj Mahal by 2020. In 2017, in an accident at Ghazipur site, garbage had come crashing down on vehicles plying on a nearby road had resulted in the death of at least two people and injuries to several others.

The parliament committee had also noted that the existing capacity of the Delhi Government to treat the municipal solid waste scientifically is just about 54 percent of the total requirement and observed that “there have been frequent incidents of landfill fires in Delhi during the last few years  which spew toxic gases and have been adding to the rising pollution levels in Delhi.”

While hearing a case related to waste management in Delhi, a bench headed by NGT Chairperson Justice A.K. Goel had noted that over 28 million tonnes of waste is there at the three landfill sites in the national capital where it is contaminating the groundwater which is turning yellow and orange and reaching the Yamuna.

Bharati Chaturvedi, who is the founder of Chintan, an NGO working on environmental research and action, said that she thinks that people in Delhi and Mumbai are realising that environment is an extremely significant issue.

“In Delhi, there is a multiplicity of authorities which becomes a problem while dealing with issues like waste management. Though landfills in Delhi come under municipalities which are run by Bharatiya Janata Party while the state government is under the Aam Aadmi Party, they together could have found a solution if they desired,” stressed Chaturvedi. 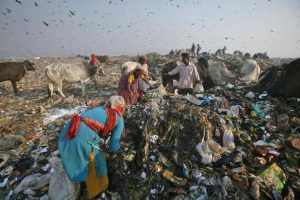 Are citizens of two megacities motivated enough to address waste?

Earlier this year, ahead of the 2019 parliamentary elections, the Association for Democratic Reforms (ADR) had come out with ‘All India survey on governance issues and voting behaviour 2018’ which revealed that environmental issues are among the top three issues among voters of Delhi and Mumbai and adjoining regions like Thane. However, proper waste management was not on the list of their top issues.

In September 2019, a group of citizens of Pune had released an environment manifesto that was submitted to all political parties and their candidates seeking votes. Apart from other environmental issues, the citizen manifesto demanded a push for ensuring the segregation of waste at the user level and a clear policy regarding the responsibility of waste on its generator.

Stalin explained that people are aware of the problem of waste and know about the importance of segregating it but the problem is when the segregated waste is collected and they see the garbage truck taking all of it together to a dumping ground, where it is mixed again, they feel their effort is futile.

However, Aggarwal had a slightly different take.

He emphasised that for him waste management is a litmus test about society’s environmental consciousness.

“It is one of the easiest issues to resolve. In two decades we have seen a rapid growth of urban areas in India and rapid growth of waste at landfills. There has not been any radical change at the government level because the approach to waste remains the same – pick and dump. It is definitely not happening at the level it should happen .. there is consciousness among people, but that is not translating into hard effort because otherwise why would our dumping grounds would be in competition with Qutub Minar or Taj Mahal (in terms of height). Had that consciousness translated into hard effort the waste going to landfills would have reduced,” said Aggarwal, who is also the founder of the Mumbai Sustainability Centre.

The government officials in Delhi and Maharashtra have been repeatedly pulled up by authorities for failing to address the issue of waste management but so far satisfactory action by them is yet to be taken. Both the Supreme Court of India and the National Green Tribunal have expressed dissatisfaction with the Delhi government for failing in ensuring proper waste management. In 2018, the NGT had also slapped a fine of Rs 50 million (Rs five crore) on the municipal corporation of Greater Mumbai for poor waste management in the Mumbai region.

The Aam Aadmi Party (AAP), which is in power in Delhi, had even promised in its 2019 manifesto for the parliamentary elections that they would take a series of actions like banning open dhalaos, increasing waste processing infrastructure, decentralising waste management and incentivising door-to-door collection to address waste management. Similar promises are expected to be made during the upcoming Delhi assembly polls as well but whether the garbage bomb will be defused or it will explode remains to be seen.

Though the CPCB has guidelines to minimise the impact of landfills and waste management facilities on the environment and public they are rarely implemented properly. The guidelines even talk about ensuring buffer zones including a green belt around such sites but such zones are rarely seen.

As a result, those living near such areas bear the maximum brunt. Rahul Kumar, who lives near Ghazipur landfill in east Delhi, is one such person.

“We suffer from the waste of other Delhiites. It is a nightmare for me and my family. I understand that no one wants a landfill near their home. So, either the government should take it elsewhere or treat it properly and protect us,” said Kumar, while conceding that his vote during elections, however, would not depend on such issues.