India and Nepal Get Together to Rescue Flood-Hit Rhinos

At least 15 greater one-horned rhinoceroses have been swept across the Indo-Nepal border by this year's monsoon floods, and both countries have come together for the rescue operations. 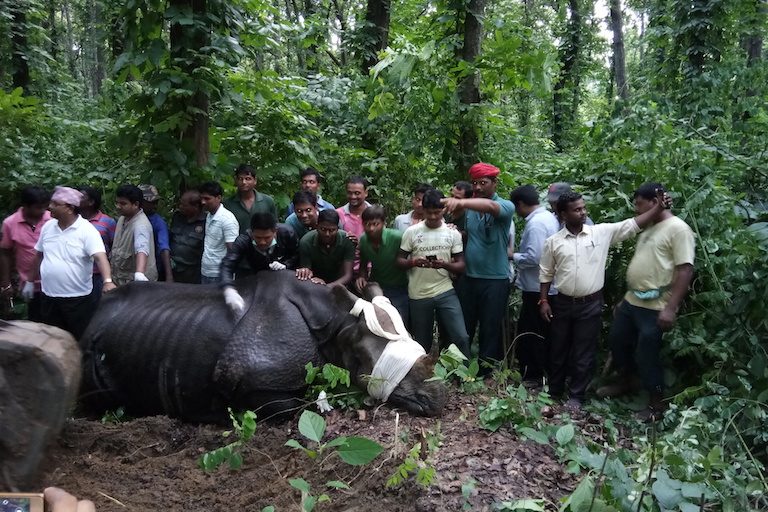 Efforts to rescue flood-swept rhinos have involved around 350 forest personnel and officials from both India and Nepal. Courtesy: Valmiki Tiger Reserve

The devastating monsoons hitting South Asia this year haven’t just affected the region’s human populations. At least 15 greater one-horned rhinoceroses (Rhinoceros unicornis) have been swept across the Indo-Nepal border from Nepal’s Chitwan National Park to the adjoining Valmiki Tiger Reserve in the Indian state of Bihar, a distance of some 100 km by water. Two of these ended up being carried further still, to the Sohagi Barwa Wildlife Sanctuary and Khushinagar Forest Division in Uttar Pradesh.

Monitoring them closely is a mammoth team of about 300 forest personnel from Valmiki, joined by 50 Nepalese forest and security officers. After more than 12 days of searching – much of that spent on elephant-back scouring water-logged forest – five rhinos were rescued and released back to Chitwan as of August 27, including a two-year-old male rescued on August 26. The bodies of two dead rhinos were also found.

The arrival of rhinos continues, with one more sighted in Valmiki last week. “Five more, though in Nepalese territory, are just across the fence and may simply step into our side anytime, thus keeping the rescue team on tenterhooks,” Valmiki field director Subramani Chandrasekar told Mongabay.

“Never before had so many rhinos arrived from across the borders in such quick succession and this is the first successful collaboration of the two countries in saving the rare endangered species,” said Chandrasekar, who is supervising the overall rescue operations. Extensive flood damages made it more difficult than usual for Indian authorities to bring in resources and personnel, but Chandraskar credits Nepal’s preparedness and prompt response with enabling the animals to be saved. 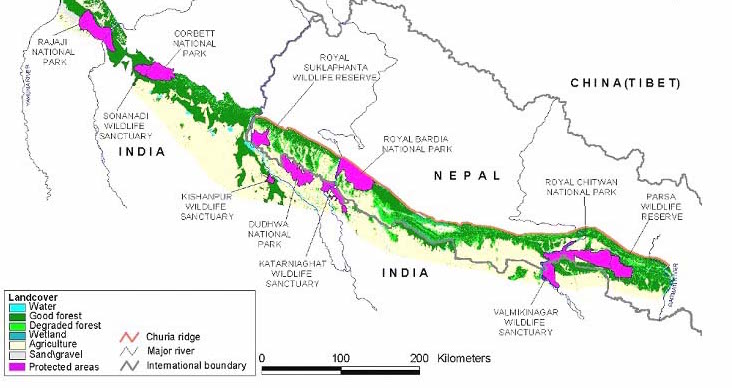 Many important wildlife areas lie in the Himalayan foothills along the borders of India, Nepal and Bhutan. Map courtesy of Dudhwa Tiger Reserve.

Wildlife knows no human boundaries. Thus, it is not surprising that rhinos from Nepal either wash across flooded rivers or amble their way through forested border zones to reach the Indian states of Uttar Pradesh and Bihar. Rhinos from India have also been found to occasionally cross over to Bhutan through the forests that country shares with the northeastern state of Assam.

While rhinos may not care about what side of the border they’re on, it can make things complicated for the people charged with their welfare. “Our prime concern is the safety of the straying animal, irrespective of their place of belonging, “said Gaurav Ojha, divisional forest officer 1 at the Valmiki Tiger Reserve and a part of the Indo-Nepal rhino rescue team. The biggest threat, he said, comes from poachers, who are quick to take advantage when rhinos are outside of protected areas and resources are stretched thin.

Added to this is the threat of human-wildlife conflict, especially if rhinos stray into human settlements or agricultural areas. “Growing anthropogenic pressures in the connecting corridor patches often results in man-rhino conflicts,” said Satya Priya Sinha, a wildlife consultant who has worked on rhinos for 30 years.

The forests in the corridors between large protected areas as fragmented by agricultural fields and human settlements. While crossing through these degraded forests and cultivated areas, migrating rhinos are sometimes chased or even stoned by villagers who are unfamiliar with the animals. Harassed and frightened, rhinos can retaliate, harming themselves as well as humans. One of the “Nepalese” rhinos rescued after being swept into India by monsoon floods. Courtesy: Valmiki Tiger Reserve

These wandering rhinos also have positive impacts, Ojha said: “It is one of the best forms of transboundary cooperation with a neighbouring country. It gives a sense of pride in being able to care for and rescue its straying endangered species and eventually lead them back safely across the border.”

Not all rhinos who cross borders wish to return, though. Three “Nepalese” unicorns – two males and a female from the Royal Bardia National Park — have chosen to make the neighboring Katarniaghat Wildlife Sanctuary in Uttar Pradesh’s Dudhwa Tiger Reserve their home for the past few years. These animals are found to spend at least 10 months in a year in Katarniaghat, return for a brief sojourn in Bardia, then reappear in Katarniaghat.

Rhinos have also been found to wander from Nepal’s Royal Suklaphanta Wildlife Reserve to the Pilibhit Tiger Reserve in Uttar Pradesh, or occasionally from Manas Tiger Reserve in India’s Assam State to Royal Manas National Park in Bhutan.

Such cross-border perambulations, by rhinos and other species, have prompted the creation of several transboundary conservation initiatives between India, Nepal and Bhutan.

One important shared goal is to increase the rhino population in the three countries to at least 4,000 by 2020, from the existing 3500. “Our joint initiatives aim at eventually pulling out the species from the IUCN Red List,” said Deba Kumar Dutta, a member of IUCN’s Asian Rhino Specialist Group and senior project officer at WWF India.

“The three countries are mutually cooperating with each other through joint monitoring and meetings, combined anti-poaching and community-driven strategies besides exploring opportunities on improved management of meta-population, habitat and corridor besides enhancing range areas of the species, thereby ensuring its greater population viability,” said Dutta.

A major step in this direction is radio collaring of migrating rhinos, said Kanchan Thapa, WWF Nepal’s conservation biologist. At least 15 rhinos in Bardia and Suklaphanta have been fitted with geo-locating collars during the last two years. “This not only enables us to keep track of their geographic location, but also get insight into their behavior and migration patterns. Their regular movement between Bardia and Katerniaghat (part of India’s Dudhwa Tiger Reserve) is thus scientifically established,” said Thapa. Rescued rhinos are loaded into crates in order to be safely transported back to their home territories in Nepal. Courtesy: Valmiki Tiger Reserve

Rhinos from Suklaphanta have also been found to wander to the grassy swamps of the Dudhwa’s Kishanpur Wildlife Sanctuary. Some even travel as far the Pilibhit Tiger Reserve, a distance of nearly 100 km, said Pinaki Prasad Singh, former deputy director of Dudhwa Tiger Reserve. Such rhino migratory routes shift over time due to changing river courses and rising anthropogenic pressures along the corridors, said Sinha.

Nepal is moving forward with a program to disperse even more rhinos in areas close to the border, translocating them from Chitwan to Suklaphanta and Bardia, thus making cooperation with Indian authorities even more important, said Thapa.

Gyan Prakash Singh, Divisional Forest Officer at India’s Katarniaghat reaffirmed the value of collaboration, noting that forest officials and staff, enforcement agencies and NGOs from the two countries frequently meet to share information and intelligence. The border security force also participates in such meetings — in addition to monitoring for poachers and maintaining peaceful corridors, they also help in controlling forest fires.

Forest personnel from both sides of the Indo-Nepal border also undertake joint monitoring of migrating rhinos and other wildlife. Nepal’s ongoing work to develop a database of individual rhinos, based on physical traits, is very helpful for monitoring teams keeping track of the animals, said Singh.

“We try to maintain a steady communication with our Nepalese counterparts, especially during the monsoon, when there are maximum rescue operations,” said Chandrasekar. The two countries share real-time information on animal movement and also conduct experience-sharing exercises on conservation issues such as water holes, forest fire lines and grassland improvement. Valmiki-Chitwan teams are also considering SMART or GPS enabled patrolling in the days to come, he said.

In a novel initiative, Chandrasekar is also figuring out cross-border rhino re-introduction from Chitwan to Valmiki’s Madanpur forest range. Some eight or nine rhinos that previously drifted to the park were observed to settle in this 100-square-kilometer patch. Endowed with alluvial marshes, cane breaks and marshes, Madanpur makes for ideal rhino habitat. The Wildlife Institute of India has already made a preliminary feasibility assessment, and a habitat viability study is planned.

Along the Assam-Bhutan border, the two countries are also working on transboundary community tourism, involving local communities from either side in the TraMCA region. “There are about 70 villages there and development of ethnic tourism in the area can help local communities on either side economically, who in turn can be included in joint anti poaching mechanisms at various cross border levels, ” said Anupam Sarmah, head of WWF-India’s Assam Landscape project.

In the meantime, wildlife officials are still grappling with the impact of ongoing floods.

“The need of the hour is for full-time joint rescue teams particularly during monsoons — with trained vets and elephants (for moving) besides rhino tranquilisation drugs along with cages for its transportation,“ said Samir Kumar Sinha, divisional head of the Wildlife Trust of India’s Species Recovery Programme.