India has an ambitious solar power programme but no proper policy or mechanism to address the waste from solar panels. 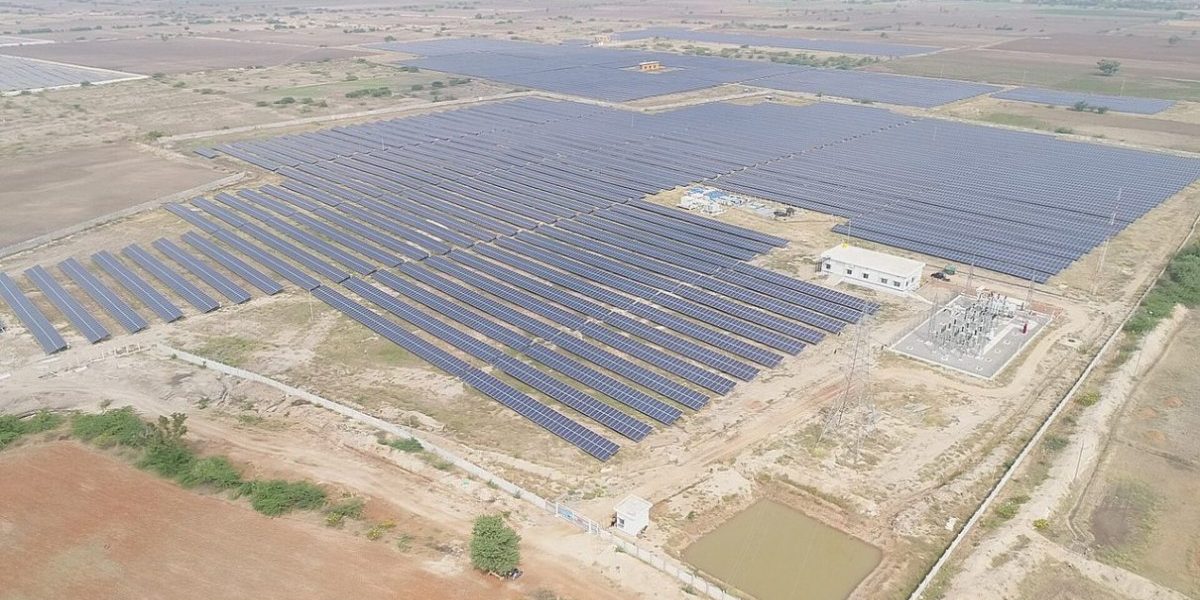 Solar power may promise a bright future for India’s energy requirements, but behind the sheen is a growing mountain of waste. While the national government is pushing an ambitious solar power programme for India, it has, so far, failed to put in a mechanism to address the problem of waste, including environmentally hazardous materials, from solar photovoltaic panels that can be hazardous to the environment.

A recent report by renewable energy consulting firm Bridge to India (BTI) said that the solar photovoltaic (PV) panels waste volume in India is estimated to grow to 200,000 tonnes by 2030 and around 1.8 million tonnes by 2050 – almost 200 times the weight of the Eiffel Tower.

However, this also means the amount of solar panel waste has increased during this time, with cases of early retirement of the panels. The lifetime of each PV panel is usually 20-25 years. Panels may be discarded earlier because of site accidents and poor quality.

As per MNRE, it is estimated that for each MW of solar power, 75 MT (metric tonne) of PV modules are needed.

BTI’s report explains that a solar photovoltaic panel is essentially made up of glass, metal, silicon and polymer fractions. While glass and aluminium, together constituting around 80 percent of the total weight, are non-hazardous, a few other materials used in the panel, like polymers, lead and cadmium compounds, are potentially environmentally hazardous. India has an ambitious solar power programme but has no policy to deal with the photovoltaic panel waste from the sector. Credit: Mayank Aggarwal/Mongabay India.

The report emphasised that if disposed off in an uncontrolled way, potential leaching of those hazardous materials at end-of-life can have negative environmental and health impacts.

“Leaching of lead has a huge environmental impact—loss in biodiversity, decreased growth and reproductive rates in plants and animals, and several other health hazards—adverse impact on kidney function, nervous, immune, reproductive and cardiovascular systems. Cadmium is a carcinogen with high toxicity as well as high accumulation potential in humans,” said the report.

It also stressed that the polymer component used in solar modules is difficult to recycle and can only be incinerated which again poses “a significant health and environmental risk due to the formation of highly corrosive gases at the incineration stage.”

“If landfilled inappropriately, waste and waste constituents can find ways into soil and water, resulting in a potentially damaging impact on the ecosystem,” it added.

Experts have been emphasising that while solar installations are growing at a robust rate, little attention has been paid to module recycling in India.

Surbhi Singhvi of BTI, who is one of the authors of the report, told Mongabay-India that “right now there is no policy to deal with the waste from the solar sector in India.”

“Solar waste just finds a mention in one place – the tender documents (of solar projects) – wherein it is said that the solar power developers are responsible to dispose the waste in line with the electronic waste rules. But the e-waste rules make no mention of the solar panel waste. So, it is no one’s responsibility,” Singhvi explained.

“The problem is not years away. It is right here right now. Developers have waste lying with them right now and this waste is mainly solar panels that get damaged in transportation or solar panels that were of poor quality that had to be replaced or damaged due to other reasons. This early life retirement of modules needs to be taken care of,” she said.

A senior official of Indian government ministry of new and renewable energy (MNRE), while wishing anonymity, admitted that the problem of waste from solar industry is on their radar now. MNRE is spearheading the renewable energy programme in India.

Also read: Karnataka’s Days in the Sun: The Paradox of Expanding Solar Parks

“There is no national policy addressing this issue as of now. But we are working on it. Soon there may be a national regulation to tackle this problem,” said the official while adding that the problem of waste from solar modules also provides an economic opportunity to recover and recycle.

Arun K. Tripathi, who is director general of the National Institute of Solar Energy (NISE), said that being one of the apex institutions in the field of solar energy it is their moral responsibility to set the right example in solar waste recycling and its safe disposal.

“I believe that an effective mechanism for solar waste disposal can be put in place if the entire industry collectively works towards it and cooperates with each other,” wrote Tripathi, in his foreword for the BTI report adding that hoped the nation takes timely action on the matter rather than wait for the problem to become too big to handle. 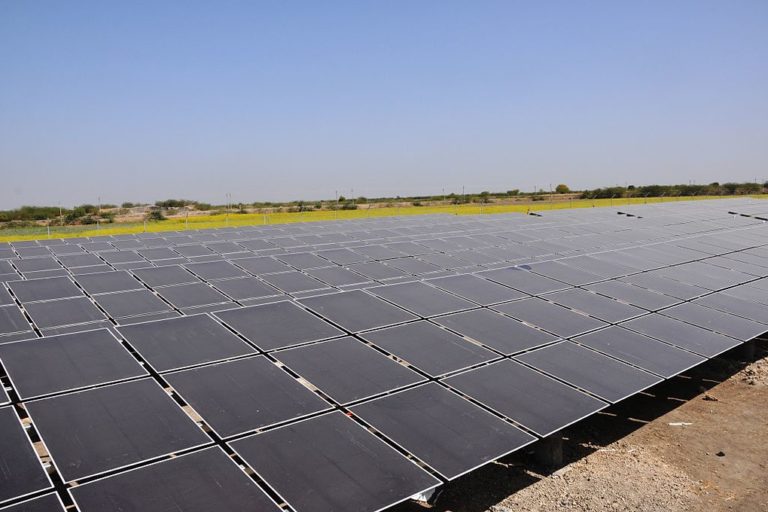 Studies reveal that India in the next few years itself the country could face a huge amount of waste from the solar sector. Credit: Citizenmj/Wikimedia Commons.

Ruchin Gupta, who is a director in MNRE, said that “in the absence of adequate standards, market protocols, and operational infrastructure, the PV waste may be inappropriately landfilled or incinerated to the detriment of human health and environment.”

“The use of potentially hazardous materials necessitates putting in place an appropriate mechanism to ensure safe disposal of solar modules,” he said in the BTI report.

Though all stakeholders recommend proper recycling for managing solar power waste, the report said that the reality is that the solar PV waste recycling is still at a nascent stage globally, both in terms of technical standards and physical infrastructure.

“The waste is usually sent to laminated glass and metal recyclers that recover 70-80 percent of the material by weight. Advanced recycling technologies can potentially push this up to 92 percent. Most materials other than glass, aluminium, and copper are usually not recovered and must be incinerated or landfilled. Unfortunately, PV module recycling is still not commercially viable,” the report said.

“There are clear environmental and commercial benefits of properly disposing of solar waste. So, if you look at solar modules there is some amount of silver. While it is very small by weight, it is quite big in terms of commercial value. Then there is solar-grade silicon – which is about 40 percent by value. Because of the presence of such high-value materials, there are substantial commercial gains to be made. But the problem is that in India we don’t have the requisite recycling facilities that can recover these materials. Right now we are not even able to separate glass from the metal frame, leave alone taking out silver or silicon from the modules,” report author Singhvi said.

She also stressed that for recycling to make commercial sense there need to be facilities all around India otherwise huge transportation cost would be involved – which is not viable.

The total estimated cost including transportation can vary between $400-600 (approximately Rs. Rs 28,000-42,000) per tonne, which is far above the value of the recovered material.

Singhvi informed that the European Union (EU) has already taken a lead in addressing the problem with a comprehensive plan for allocating liability, setting recovery and recycling targets, treatment requirements, and consumer awareness.

“If right practices are followed, there is a clear commercial and environmental gain. The right practices include using water efficiently in the cleaning of panels and proper recycling of solar panel waste,” she added.

Recently, the National Green Tribunal (NGT) was hearing a case regarding the use of “antimony-containing glasses in solar photovoltaic panels and the possible environmental risks or consequences at the end of life of such solar panels.” Solar panels contain a substance called antimony, used to improve stability of the solar performance of the glass upon exposure to ultraviolet radiation or sunlight, which would leach from the glass when the waste panels were exposed to wet conditions.

The draft noted that solar panels with antimony-containing glass (SPACG) may be considered as a ‘low effect’ waste that needs to be regulated for environmentally safe handling, recycling or disposal.

Antimony is a silvery-white metal that is found in the earth’s crust. It is a type of heavy metal. Commercially, the most used compound of antimony is antimony trioxide (ATO), which is a white powder and slightly soluble in water, and the other compound is potassium antimony tartrate, which was used as an emetic (a medicine that induces nausea and vomiting) during the Middle Ages.

The MNRE draft blueprint noted that antimony in the form of potassium antimony tartrate is a toxic compound but the textured solar glasses used in solar PV modules contain antimony in the form of antimony trioxide, which is considered by the World Health Organization to have very low toxicity, due to its low solubility in water and poor bioavailability. It also noted that that toxicological effects of antimony that may release from solar panel glass, even if it exceeds the specified WHO norms, will be less.

The MNRE’s draft blueprint also noted that the recycling facilities for the solar panels with antimony-containing glass at the end of life is not yet available in the country. The draft is expected to be finalised soon after which environment ministry is expected to come out with a policy on it.

“Such facilities may be created by industry once the adequate quantity of PV waste is available for recycling and also a policy framework that stipulates the responsibility to the generator or producer for sending the waste for recycling,” the draft added.

It also suggested that considering the leaching potential of antimony, the end-of-life solar panels may be treated as ‘low effect waste’ and handled as per the provisions under Hazardous and Other Wastes Management Rules, 2016. 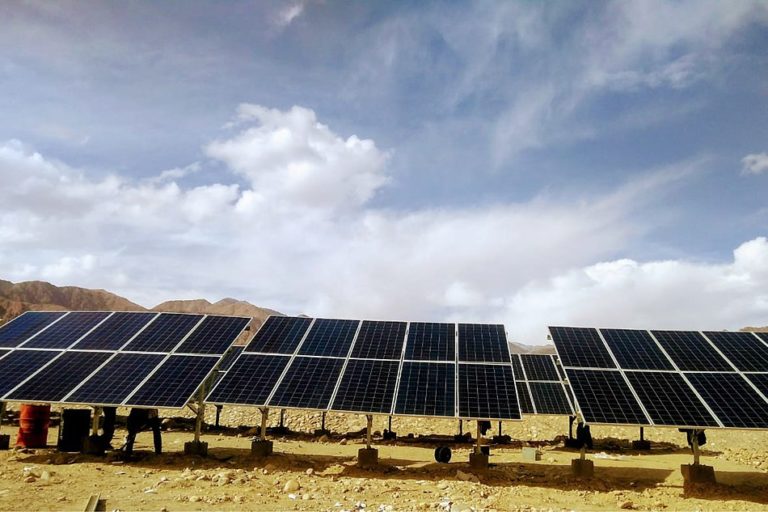 The central government is expected to come out with a policy for the management of waste from solar PV panels. Credit: Energiaastatcon/Wikimedia Commons

On this, BTI’s Surbhi Singhvi said that “most of the environmentally hazardous materials used in modules lie outside of the glass.”

“For example, lead is used in modules which is extremely hazardous and dangerous to the environment. Then there are various polymers that cannot be recycled. You can only incinerate them and when that is done HFCs are emitted which again pollutes the air. However, the antimony case represents the first step towards ensuring appropriate disposal of solar waste,” she said.

Proper recycling is important to justify the ‘green energy’ tag

Experts believe that there is no doubt regarding the benefits of solar power but they feel that to justify the ‘green energy’ tag, the solar sector needs to adopt a proper process to address critical issues like end-of-life recycling.

Satish Sinha, who is an associate director with Toxics Link, said that “no thought has been given to the expected waste from the solar sector.”

“In about 15-20 years from now, this waste could pose a serious threat on account of large volumes and the absence of an ecosystem comprising of policy framework and technology to manage this waste. The waste arisings are not only solar panels but also connectors, cables, storage devices etc. making it extremely complex to handle. It has always been the case that new materials or products are introduced in the market with little or no thought to its end of life management, finally passing the burden to society. Electronic waste is a case wherein the country pushed ahead with digitisation and connectivity but did not plan for the end of life management of waste and is now struggling to find a meaningful solution,” he said.

On a query regarding the environmental impact of the manufacturing process, he explained that, at present, India is not a major manufacturer of solar panels since most of it is manufactured abroad and is primarily only assembled in India.