In California, the Idea of a Drought Shapes Up 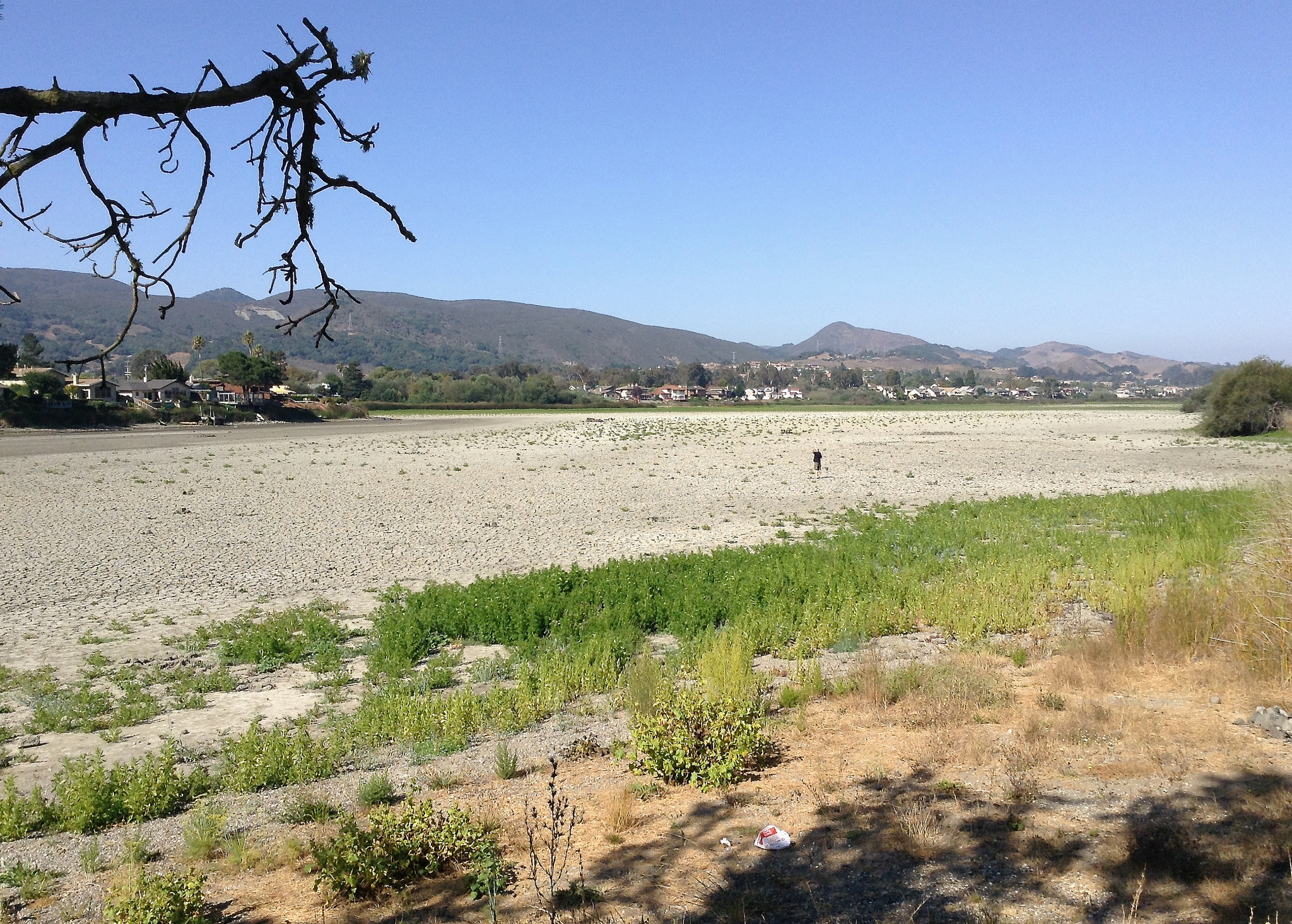 Anyone who has spent anytime in California recently knows that at the slightest hint of a darkening sky, it is common to look up with hope, and sometimes, if one were in the company of others, to say with a mix of nostalgia and desperation, “We need the rain.”

Hope has an overarching presence. Most of the state’s rain falls between October and March. But as the state navigates its fourth consecutive drought year, it is hope that seems to hold water. For many, especially those of us who live in the privileged urban outreaches of the state’s water arteries, water just works. Turn the tap, and there it is. We kind of need the rain, we think.

But for some, especially those people who fish and farm and eventually feed the rest, the pain is more acute because their lives actually do fluctuate with the uncertainty of the rain. The uncertainty is heavy. There’s just not enough water in California these days, weeks, months, years, and likely going by recent research, this decade.

There are many ways of scrutinizing the drought. One is, of course, to discuss how intense it is.

There are images. Drought maps from the United States Drought Monitor show the steady spread of alarming red–an exceptional drought–across the state. Images of the state’s depleted reservoirs with record low levels of water reveal steep banks of barren soil, or, like it happened at the Folsom reservoir last year, remains of Mormon Island, a Gold Rush town that had been submerged since the 1950s. The poster child of reservoir drought images, Lake Mead in Nevada, where 10 percent of California’s water comes from, is so low that a white “bathtub ring” of old mineral deposits is visible above the water line.

There are research papers. Most scientists say that the direct reason for the state’s dry spell might be a ridge—an area of high atmospheric pressure—hovering over the northeastern Pacific Ocean. Called the Triple R–Ridiculously Resilient Ridge–this high pressure front stopped winter storms from hitting California the last couple of seasons. But the likelihood of this phenomenon increases with current greenhouse gas concentrations. Things are a little more complicated this following winter, due to strong predictions of an El Nino-aided rainfall.The El Nino is an irregular weather disruption over the equatorial Pacific Ocean roughly between the International Date Line and Peru. A combination of warm ocean waters and the right wind directions could result in more rain in California. Parts of southern California have already had an unusually cool and wet start to their summer. But to rely on one El Nino season to offset a statewide drought is to, yet again, rely on hope.

Hot and dry is the best way to describe the long term weather pattern in the region. Of the past fourteen years, eleven have been drought years in the western part of America. It’s what scientists call a “megadrought” and attribute to human-induced global warming. In the second half of this century, there’s a 50 percent chance that there will be a megadrought that will last at least a decade, according to climate scientists from the NASA Goddard Institute for Space Studies.

In some regions of the Central Valley, pumps are already drawing on water that first trickled down into the ground 20,000 years ago.

There are statistics. Last January, for the first time in its recorded history, San Francisco did not get a single drop of rain all month. A study of tree rings showed that these might be the driest years since 1580, a little after the first European explorers navigated the California coast. Add to that some heat – these past few years have been the warmest in the state’s recorded history. The Sierra snowpack is at six percent of normal. Dry grass wilts where there should be five feet of snow high up in the Sierras. The hot and dry pattern pegs this drought as the worst in more than a millenium, according to researchers at the Woods Hole Oceanographic Institute.

In April, the largest reservoir for the state was releasing water at half its average rate. Two reservoirs closest to the farmlands around Fresno are at a half and a third of their average capacity at this time of the year. The state has about a year of water left in its reservoirs, according to a March op-ed by James Famiglietti, the lead scientist at the University of California Center for Hydrologic Modeling. Which means everyone’s going to rely even more on groundwater—and in some regions of the Central Valley, pumps are already drawing on water that first trickled down into the ground 20,000 years ago.

And there are consequences. Overreliance on groundwater can be devastating. In just the last four years, the Sacramento and San Joaquin river basins–the heart of the valleys that support California’s US$46 billion agriculture machinery–lost over12 million acre-feet of water, half of it due to groundwater pumping. An acre-foot–or 326,000 gallons–is the amount of water a family of four might consume in a year. Twelve million acre-feet is more water than what all of California uses for domestic and municipal supplies in a year. As the groundwater is pumped away, the ground above it crumbles, and land has been subsiding by as much as a foot every year in some areas. In some places like East Porterville in southern California, where both the taps and wells are dry, the state is trucking drinking water for the town’s residents. The one thing that all Californians agree to is that this is a serious disaster.

The drought is a good time to revisit the geography and language of water. The northern part of the state receives most of the rain and snowfall, but most of the state’s residents live in the southern arid lands. The history of water engineering in the state has always acknowledged that it is a desert. This serious drought, then, is also a good time to come to terms with the language of water. For most of the time, in order for people to survive and the economy to grow, water doesn’t actually flow. It is moved.

Historically, the Sacramento river drained the wetlands of Sacramento Delta and flowed into the San Francisco Bay. Today, water is channeled from mountaintops to storage reservoirs. From there, it’s “released”, and what is moved into the delta is called inflow. Water is also “diverted” or “exported” to the municipal districts and to farmers who grow half the fruits for the country. This is “developed” or “managed” water. In times of need, water districts and individuals who have legal rights can “call on” and “take” water that was diverted to a distant reservoir.

Conservation groups and researchers help draft biological opinions to assess whether water diversions will harm the existence of a water species. These “bi-ops” suggest how much water can be pumped away from the delta, when the gates can be opened, and what effects the flow rate has on a species. Hydrologists weigh in on how much water is necessary to maintain a certain water quality–this water is a hydraulic barrier. To oversee inflow, diversions, exports, outflow, bi-ops, barriers, and all kinds of water rights, the State Water Resources Control Board has an Office of the Delta Watermaster. If this is starting to sound like a board game, try the California Water Crisis, an actual board game that educates people about the state’s water politics.

This piece was excerpted with permission from a feature on California’s water crisis in Guernica Mag, by Venkat Srinivasan.