Ground Report: Illegal Mining in Aravali Has Not Stopped Despite SC Ban

The electoral battle is a direct contest between the BJP and the Congress. However, politicians from both parties have a stake in the mining business - it funds their election campaigns.

Alwar, Rajasthan: Last month, when the Supreme Court ordered the Rajasthan government to ensure that all illegal mining in the Aravali region was stopped within 48 hours, one man had doubts whether mining companies and contractors would comply. Haribol baba, a sadhu-activist who has been fighting against illegal mining in Aravali for more than 15 years, knew that the nexus between politicians, contactors and bureaucrats was too strong.

The sadhu wasn’t wrong. The illegal mining has not stopped. This reporter travelled in Alwar and Bharatpur districts and found mining and stone-crushing even after the SC lambasted the state government just a week ago. In some parts, like Ladiya near Bhiwadi, quarries even ran in the daytime.

“Many people mint money with this  activity here. The politicians put pressure on bureaucrats and even they (bureaucrats) find it lucrative,” said 44-year-old Haribol baba. “There was one officer who earned so much money during his tenure that he later became directly involved in the mining activity. The court has ordered mining to be stopped several times, but the government is not keen.”

A Supreme Court bench had banned illegal mining in Aravali last month when the committee it had appointed said that 31 of the 128 of Aravali hills have vanished.

The court observed that “humans seems to be flying away with the hills just like Hanuman”, adding that the destruction of the Aravalis endangers lives of millions of people in Delhi as well.

The Aravalis are critical for recharging groundwater in Rajasthan and Haryana. They prevent the spread of Thar desert towards Delhi. Credit: Hridayesh Joshi

Apart from their ground water recharging capability, the Aravalis prevent the spread of the Thar desert towards the capital and block dust storms from an already choking Delhi. The Supreme Court echoed the views of environment experts, saying the hills work as a “barrier” and reduce the pollution in Delhi and its surrounding areas.

“The air quality index (AQI) which crosses 400 or 500 every winter will easily reach 700 or 800 if the Aravalis are not protected,” says Harinder Dhingra, a Gurgaon based environmental activist.

The Aravalis are rich in biodiversity and function like mini-ground water towers that absorb rainwater, reviving the ground water level. In many parts of Rajasthan and Haryana, illegal mining has wiped out many hills. As a result, dealing with the rapidly falling water level will be a big challenge soon.

One mine worker in Bharatpur says that the the hill landscape has changed a lot over the past 15 years. “The hillocks have disappeared very quickly,” said the worker, who spoke on the condition of anonymity. “A large number of contractors are involved in the illegal mining. The violation has increased by leaps and bounds in the past one-and-a-half decade,” he added. 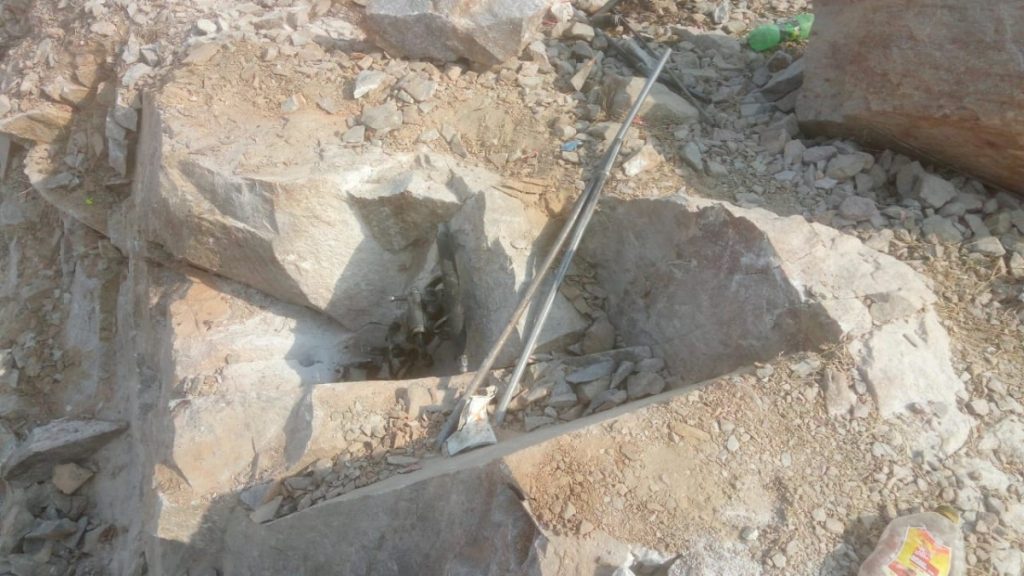 Illegal mining occurs even in daylight. Photo of mining equipment was taken in Ladiya region of Alwar after the workers fled, leaving the tools behind. Credit: Abhishek Upadhyay

When this reporter reached Ladiya, mining was underway. When the workers spotted us, they ran away, leaving behind the equipment. The administration and police’s sloppy attitude ensures that illegal activities are carried out brazenly in many places. Even in the Nagal area of Bharatpur, this reporter observed mining in action in broad daylight, apart from and stone crushers.

In several places, the stone crushers begin working at dusk and carry on till early morning. The stones are loaded onto trucks and tractors and are transported out of the quarries under the cover of darkness. In some places, it is business as usual even after daybreak.

Local activists and reporters also displayed videos and photographs showing mining activity in places like Gadhaner, Chinawada, Bolkhera, Lahsher, Indroli, Bhuapurgadi and Chapara. All of them fall under the Bharatpur and Alwar districts, where officials claim illegal mining is absent.

In the past, some government officials have paid with their lives for standing up to the ‘mining mafia’. Last year, Lalaram Yadav, a constable of Rajasthan police, was run over by a truck driver in Chaupanki area in Alwar district. He was trying to stop a vehicle that was transporting illegally mined materials.

Constable Lalaram Yadav was run over by a truck last year when he tried to stop it from carrying illegally mined stones. Credit: Hridayesh Joshi

Chetan Agarwal, an ecological expert who has witnessed mining in the Aravalis closely over the past decade, says illegal mining has become a “lucrative cottage industry” and a “way of life”. “Even if the court bans mining, it carries on at several places on a smaller scale. Frequently, illegally mined materials are mixed with material that has been legally mined. This helps evade tax and makes it lucrative,” he says.

Most of the illegal mining occurs after dusk and the material is transported before sunrise. Credit: Hridayesh Joshi

The Rajasthan government informed the Supreme Court last month that it receives Rs 5,000 crore in royalties from mining. The government does not receive any revenue from illegal mining, resulting in a huge loss to exchequer. In 2013, Alwar district forest officer P. Kathirvel had calculated that the state had lost around Rs 50,000 crore over 15 years in just Bhiwadi area. When contacted, the officer declined to comment but confirmed that he had written to senior officers to set up an enquiry to reveal the gamut of illegal mining.

At times like these, the reporting makes a difference. Support journalists who are unafraid to ask tough questions. Click here for more details.

Not an election issue

Despite the issue’s economic and environmental significance, political parties are not keen to make it part of their election agenda. With assembly polls due on December 7, the issue of illegal mining is completely missing from political discourse.

The electoral battle is a direct contest between the ruling Bhartiya Janta Party (BJP) and the Congress. However, politicians from both parties have a stake in the mining business, either directly or otherwise. Money generated from mining is used to fund their election campaigns.

Also Read: BJP Minister in Rajasthan Booked for Seeking Votes in the Name of Religion

“Why would any party make this an election issue when their own supporters benefit out of it? Members of Sangh parivar organisations such as Vishwa Hindu Parishad and Bajrang Dal are involved in the mining today. If the Congress comes to power, their people have the contracts,” says Omprakash, a resident of Pahari tahsil in Bharatpur district.

The economic gains of mining are so overpowering that apart from the environment, the religious constituency is also ignored. The BJP, which often rides the election campaign on Hindutva issues, has dismissed the dissenting sadhus on this issue. Haribol baba and his guru Ramesh baba have been protesting against the destruction of the hills for many years because the Kama and Pahari Tehsil are considered part of Lord Krishna’s land. They say that the BJP government has not extended any support.

Haribol baba said the sadhus were disappointed with the BJP’s failure to save the dharamsthali (holy land). “When we organise protest they suppress us. They slap cases on us and other devotees and when we try to file a complaint against the illegal miners, they refuse to lodge them,” says Haribol Baba.

Hridayesh Joshi is an independent journalist. He tweets at @hridayeshjoshi.