The department needs to actively draft strategies to different kinds of conflict situations while also being actively engaging with stakeholders to assuage them. 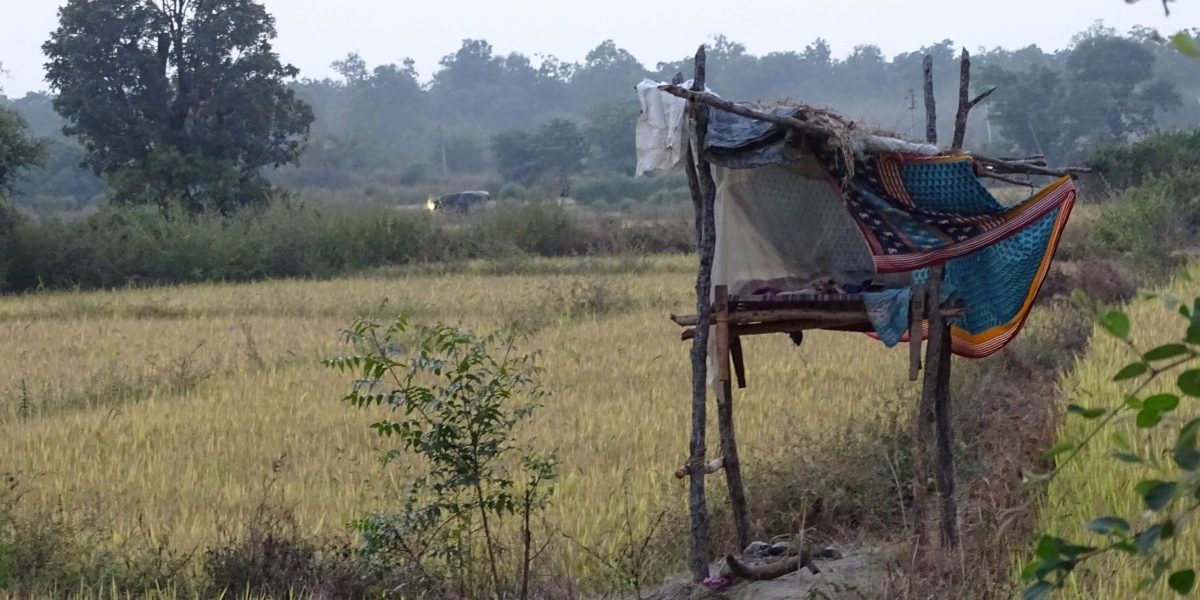 A typical machaan used by farmers living on the fringe of forests in central India to ward wild animals off at night. Source: Author provided

The past year has been one to forget for India’s wildlife. A terrified elephant calf engulfed in a fireball was photographed running behind its equally terrified mother, chased by an angry mob of villagers. Avni the tiger was killed in a politically charged operation that involved a controversial sharp shooter. The Lalgarh tiger, whom the forest department couldn’t track and capture, was killed in the ugliest of fashions: a spear right through his face by a group of villagers who tracked it before the forest department could.

The forest department in most states had few answers in each of these episodes.

In 2018 alone, 460 leopards died, mostly due to human-made causes – the highest in any year till date. Thirty-five elephants were killed by accidental electrocution. The bodies of nearly half of all tigers that died in 2018 were found outside protected areas. While India celebrated its ‘wildlife week’ in October, Gujarat did so in an unusual way: by signalling to the world that 23 Gir lions had died due to a disease that that could have been dealt with with efficient precautionary measures. The story of the great Indian bustard was even more morose.

In the shadow of this grief, regulatory agencies cleared countless ‘developmental’ projects, paving the way for the destruction of the Aarey forests and mangrove sanctuary in the Mumbai metropolitan region. Authorities also snatched land from indigenous communities in Hasdeo Arand to set up a coal mine.

In fact, between 2012 and 2017, 162 forest rangers lost their lives guarding India’s forests – the most in the world. News reports seldom focus on the extreme human reactions to wildlife straying into populated areas. Leopards and elephants are being brutally killed but there also snatches of reports of arson against forest department personnel. Most reportage has put the onus of extreme conflict on officials, who are often photographed preparing to deal with a stick-wielding mob.

This didn’t happen overnight. For the last two decades or so, the forest department has not been popular among the masses. On issues ranging from implementing joint forest management strategies to interpreting the Forest Rights Act, communities have accused the department of rampant corruption, oppression and denial of basic rights. A plethora of schemes meant to improve the lives of forest-dwelling groups have come a cropper, leaving rural communities dissatisfied.

On the other hand, the department has always considered the forest and wildlife its properties. And the fact remains that despite overwhelming odds, innumerable officials within the department have gone out of their way to preserve our forests – often drawing the ire of their counterparts in other departments, who view it as an obstruction to their own development-related work.

In spite of frequent setbacks, the forest department has steadfastly stood against diversion of forest land, poaching, encroachment and fragmentation. And like it or not, it will go down in history as one of the key protectors of whatever is left of India’s biodiversity.

This isn’t to say their work is flawless. Forest department officials often fight for the forest at risk to their lives while also working tirelessly, and perhaps involuntarily, to alienate communities integral to the forest ecosystem. This has led to animosity on both the sides.

In villages, irate mobs see each transgression by the unfortunate tiger as an act of revenge against the forest department and their latent anger is fuelled into revenge killings, forest fires and arson. In other circles, the department has been increasingly vilified for clumsy crisis management – as exemplified by murder of the tigress Avni, when the national media pushed the Maharashtra forest department into a corner.

One of its most significant failings is to communicate, instead choosing to get into a huddle after each rescue attempt. This only betrays a lack of willingness to engage with communities and to seek public support. And over multiple occasions, it worsens the department’s impression.

Recent events in the Indian biodiversity sphere suggest human-wildlife conflicts can also be responsible for the increasing incidence of human-made forest fires, deforestation, resettlement retaliation, road-kills, etc. So the department needs to actively draft strategies to different kinds of conflict situations while also being actively engaging with stakeholders to assuage them.

The thorn around paying cattle-kill compensation needs to be swiftly addressed. A successful model exists in and around the Bandipur tiger reserve, where the Mariamma Charitable Trust preempts any outburst by disbursing compensatory funds within a few hours of a kill.

Above all, the department should consider promoting culturally sensitive officials who have shown that they’re in the service out of a sense of heightened duty and not simply because wildlife postings are considered plum opportunities in the current setup.

Abhijit Dutta has a postgraduate degree from the Indian Institute of Forest Management and works on issues related to wildlife and tribal communities. Kunal Sharma has 15 years of experience in the field of conservation across the forests of South India.