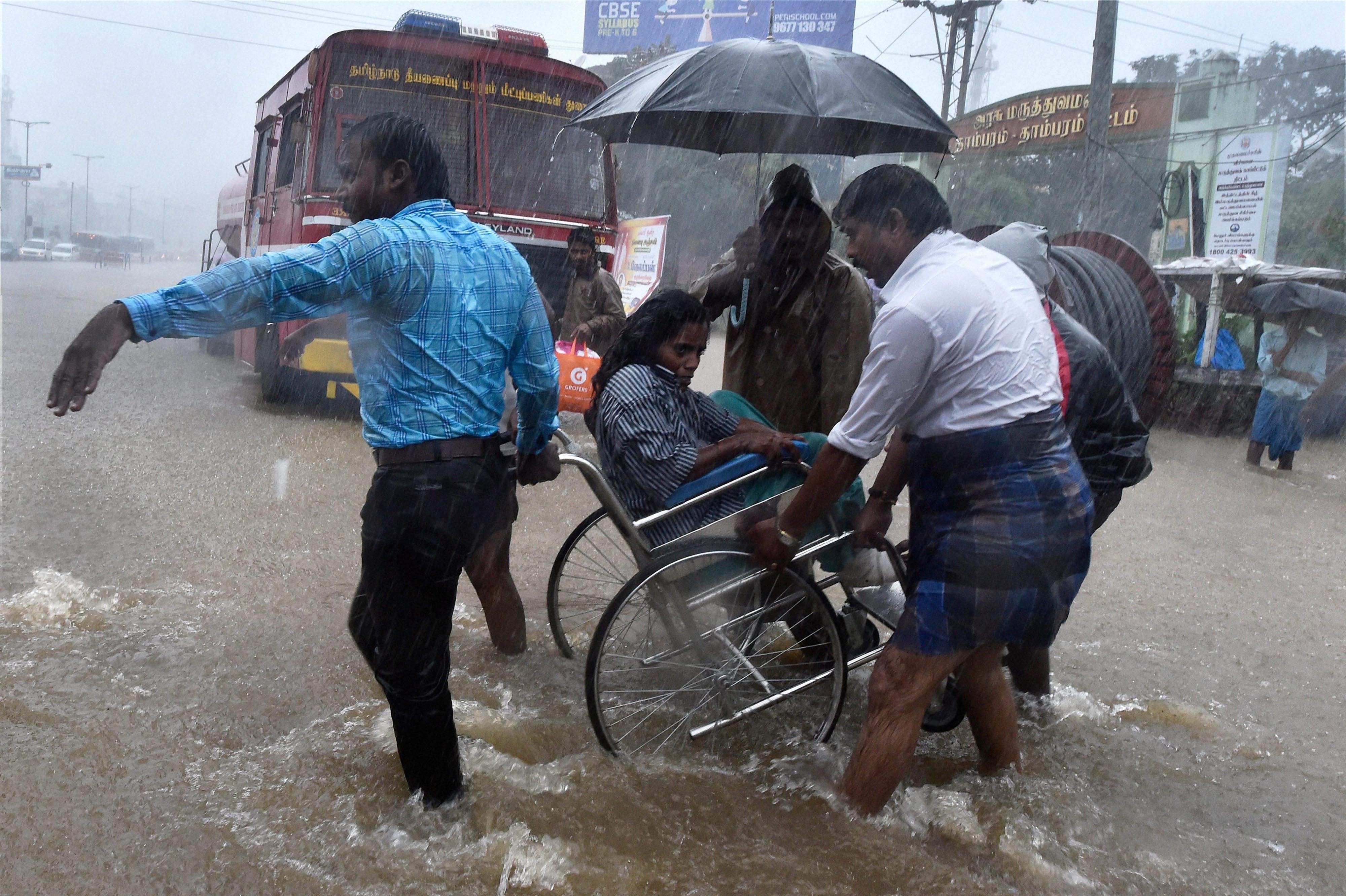 Patients being shifted from a flooded hospital after heavy rains in Chennai on Tuesday. Credit: PTI Chennai: Around 5 pm on the 1st of December, an official who does not wish to be identified watched as the sluice gates of the Chembarambakkam reservoir were cranked open. Word was that 10,000 cusecs of water was to be released into the Adyar river from the reservoir which was close to overflowing. “I was at Chembarambakkam seeing the huge amount being released,” the official told The Wire on Monday. “I didn’t imagine they were unleashing a deluge. I was so naive as to have thought that they would have taken the consequences into account. In fact, the next day I was shocked to hear of what happened because of the water release,” he said.

About an hour earlier, at around 4 pm the same day, journalists in Chennai received a terse warning. “Water is being released from Chembarambakkam lake at the rate of 5,000 cubic feet per second,” a press release issued by the Chennai Collector, E.  Sundaravalli, stated. “Since the inflows into the lake have increased, there is a possibility of increasing overflow to the tune of 7,500 cusecs. People living along the banks of the Adyar river are advised to move to safer areas,” it said.

A subsequent press release issued a little later requested the public not to attempt to venture near the Adyar or Cooum rivers out of curiosity and not to allow children near the banks. The statement said that the revenue department, police and fire service authorities were informing the people about this as well. The flooding began that night. By the morning of the 2nd of December, most areas of Chennai within a radius of seven kilometres on either side of the Adyar river were under water. By noon that day, water had entered homes and driven people out onto the streets. In areas closer to the river, water rose to heights of 10 feet, forcing residents in areas like Defence Colony onto their rooftops.

What was conspicuous by its absence was information. Take for instance the information now available on the state government’s site. On the 1st of December, the Chembarambakkam reservoir was at 86% capacity with storage of 3141 million cubic feet as against its maximum capacity of 3645 million cubic feet. Outflow from the reservoir shows a mere 900 cusecs into the Adyar river. Recorded rainfall is 17 mm. Now take the reservoir data of December 2, the day of the actual flooding. As per the government site, storage levels in Chembarambakkam went up to 93% with levels hitting 3396 million cubic feet. 47.5 cm of rainfall contributed to this. Water released from the reservoir into the Adyar river was a calamitous 29,000 cusecs. In fact, say officials off the record, 29,000 cusecs of water was released at 10pm on December 1. Curiously, there was no press release informing the media about this enormous unprecedented outflow from the reservoir. Residents report that in a few areas, the police made announcements about the likelihood of flooding using loudspeakers. But most of Chennai did not know. Caught unawares, residents were horrified to see water taking away their homes and belongings. Why did the state administration not issue any warning to the media or communicate to the public that a potential disaster was heading towards them?

“We communicate such alerts through wireless to police and other authorities like panchayat presidents in places along the river,” said S Rajaraman, monitoring officer for flood rescue and relief for Kanchipuram district. “As soon as we get information about water release, it is communicated to villages on the banks of the river. We then inform the public through the local authorities and ask them to move away,” he said. No other official responded to The Wire‘s queries on this issue. Journalists covering the floods were told verbally about the release of 29,000 cusecs of water by officials of the Public Works Department only after being questioned specifically about the quantum of water being released.

What actually caused the flood?

On digging deeper, more questions emerge. The Poondi reservoir, which empties into the Cooum river, also saw unprecedented outflows around the same time. On the 1st of December, the outflow from Poondi was at 8,552 cusecs as per the state government site. On the 2nd of December, the outflow was at 30,200 cusecs – more than that of Chembarambakkam. On the 3rd of December, Poondi discharged 36,484 cusecs, while the release from Chembarambakkam on the same day came down to 11,000 cusecs.

So why did the areas surrounding the Poondi reservoir and along the Cooum river not get flooded? Why did only the areas around the Adyar river get flooded?

A senior state government official told The Wire on condition of anonymity that heavy rainfall and overflow from various lakes into the Adyar river was the cause of the inundation. “The Adyar river’s capacity is 40,000 cusecs,” he explained. “Around 60,000 cusecs was flowing for two days, meaning three times the capacity of Chembarambakkam,” he said. The official also said the Cooum river thankfully did not flood despite high discharge from the Poondi reservoir simply because rainfall in the area was lower. “Lakes in the Porur, Tambaram and Mudichur areas flow into the Adyar river, which was already in spate,” he said. “Hence water backed up and there was a reverse flow into surrounding areas. The saving grace is that the Cooum was not flowing like the Adyar. The Cooum’s capacity is 25,000 cusecs. Less rainfall meant its flow was less. If the flow had gone up to 50,000 cusecs for instance, areas like Adyar, Kilpauk, Nungambakkam, Chintadripet and Egmore would have had a crisis. You can’t take floods in both rivers,” he said.

Environmentalists, however, say that the flood was entirely man-made, a creation of the state government. “Precipitation data has to be factored into the way reservoirs are managed,” said Jayshree Vencatesan of Care Earth, a non-profit working in the field of environmental conservation. “We cannot allow reservoirs to fill up like a bucket and then suddenly empty them. That cannot happen,” she added.

Activists also blame the huge deposits of sand and sediment that they claim blocked the flow of water from the Adyar river into the sea. “There are all kinds of encroachments on the Adyar,” said Nityanand Jayaraman, an environmental activist. “In September this year the state government laid a road on the Adyar river just for the Global Investors Meet. There is huge siltation of the river due to the dumping of sewage. This is blocking the flow of water into the sea,” he said.

Vencatesan says the Poondi outflow did not go into the surrounds of the Cooum river simply due to the presence of the protected Pulicat Lake, a swamp that absorbed the excess water. “It is very clear that wherever there are protected areas like Pulicat and Pallikaranai (another protected wetland in Chennai), they have acted as shock absorbers – taking in the water and preventing flooding,” she said. “There is no choice in front of the government now. They have to designate certain areas as no development zones. Only then can other areas be maximised for development,” she said.

Another big error made by the state government, say sources, was the release of this large quantity of water at around 10pm on the December 1. “Water should have been released by 6pm at least so that people have a chance of getting out when the flooding would have begun at around 10pm,” said the source. “It was wrong to release so much water post 10pm. Flooding began by 2am and people were stuck,” he said.

Could the flood have been avoided altogether? Was it a series of costly errors by the state government for which Chennai’s residents paid the price?

In the aftermath of a 2009 earthquake in Italy which claimed 309 lives, seven scientists of the country’s National Commission for the Forecast and Prevention of Major Risks were sentenced to six years imprisonment for “having failed to carry out their legally binding duties as public officials”. This was prompted by reassuring statements made by the Commission a week earlier which led Italians to stay indoors believing they were in no great danger. A subsequent appeal overturned the verdict for six of the scientists, upholding the sentence for only one.

As the state government now focuses on relief measures, the actual cause of the flood has been put on the backburner. Government officials and Chief Minister J. Jayalalithaa have chosen to maintain a stoic silence on the issue. The monsoon is not yet over. Tamil Nadu can only benefit from a swift commission of enquiry being set up to go into whether official apathy was behind the floods and to put in place systems to prevent a recurrence in the future.

Sandhya Ravishankar is a freelance journalist in Chennai.