Supriya Sahu, district collector of the Nilgiris, embarked on the campaign to make the Nilgiris a plastic-free zone and hence, emerged the Green Brigade – a group of volunteers checking on people littering the streets.

A petite bundle of dynamite! That’s not how I, or anyone for that matter, would describe the average district collector. But that’s exactly what Supriya Sahu, collector of the Nilgiris, in Ooty, South India’s most famous hill resort, who burst into the district on August 9, 2000, epitomised. She was an administrator par excellence. But the people of the Nilgiris will remember her for waving the ‘No plastics’ banner and beginning the movement for a plastic-free Nilgiris.

She did this at the turn of the millennium, long before ‘plastic-free’ became fashionable, long before any but the most dedicated environmentalists were talking about it seriously.

What inspired this obsession with banishing plastics from your district? I asked her. “I saw hundreds of cows eating waste from garbage heaps. And while trying to get at the leftovers in garbage dumps, they frequently swallowed the plastic bags the food was packaged in. The turning point was when I heard about the plastic pulled out of the intestines of a wild elephant during an autopsy. This elephant had also been eating from a horrid plastic filled rubbish heap. Such a tragedy,” she answered. 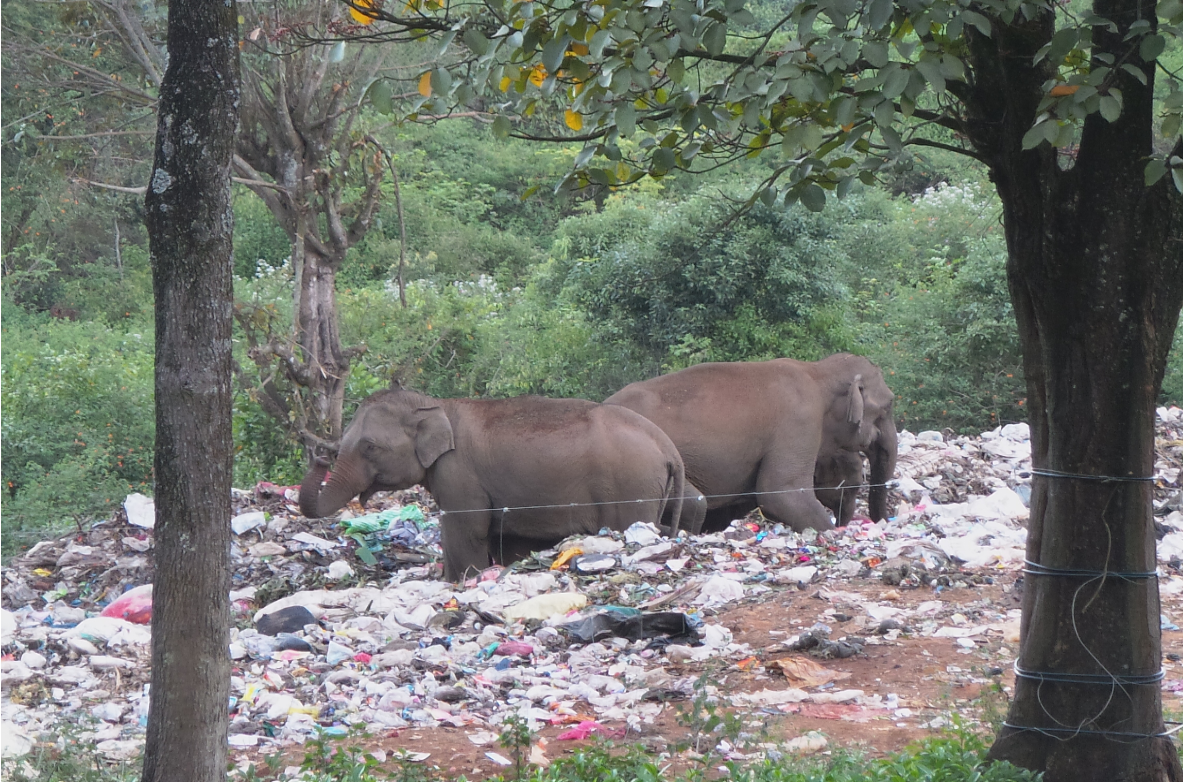 A photo of elephants in garbage dump in Nilgiris, in 2015. Photo: Special arrangement

“I thought I have the capacity to do something about this problem, and I’m in a position, as collector, to do something effectively. So I decided to announce a ban and begin implementation. I created a committee to brainstorm and work out what we could do. Once you explain why plastic should be banned, any normal person will see the logic. But implementation was a different thing. There was no rule of law to put the ban into practice. We also had to study plastics and prioritise what was most harmful. We focussed on polythene bags.”

The worst offenders were the tourists who brought in enormous quantities of disposable plastic cups and spoons, non-paper plates. And of course the ubiquitous polythene carrier bags.

The big question, however, was how to enforce the ban effectively.

Supriya embarked on the campaign aided by her myriad supporters and admirers. First, she called together the town panchayat leaders. Experts created a brilliant power point presentation, using overhead projectors. This was twenty years ago, before high tech presentations became commonplace. 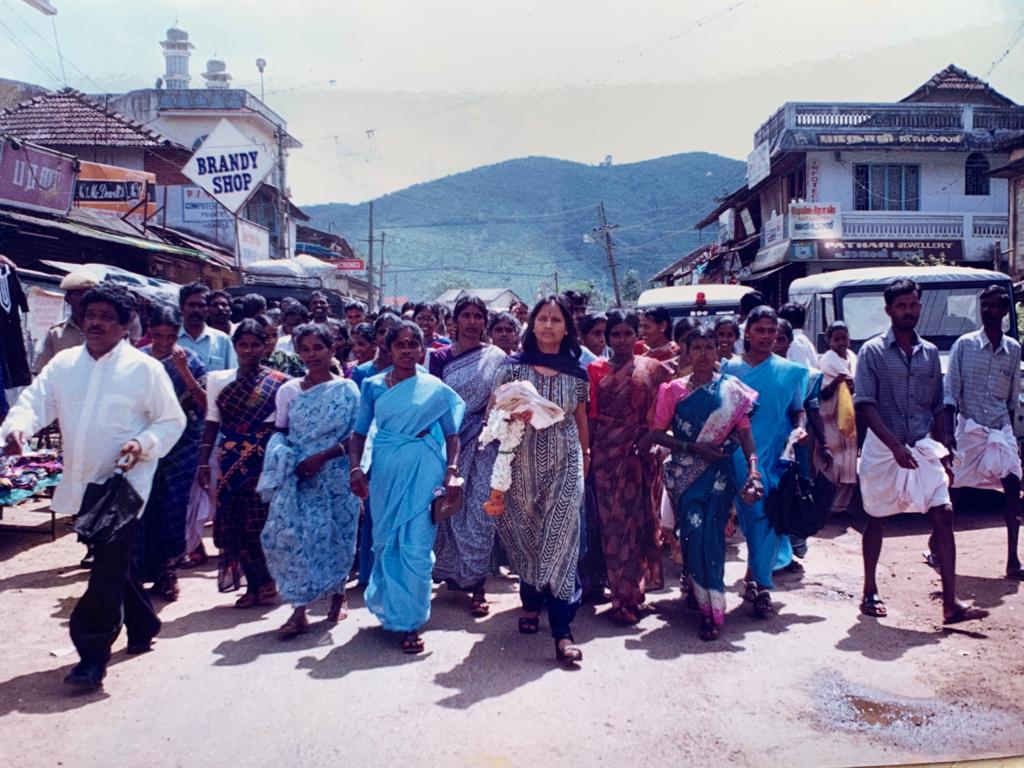 The pictures showed horrifying visuals of animals eating plastic bags containing thrown away food, which littered most tourist routes. It then moved to blown up graphics of gruesome post mortem shots of vets removing plastic bags from animal carcasses.

They created hypothetical sketches showing hills of plastic, with real-time shots of rivers, valleys and landfills all turned into mounds of ugly plastic landscapes.

It was a powerful image. And it shocked viewers. Another gut wrenching visual, showed a young mother whose unborn child was harmed in the womb, emerging disfigured because, the story went, the mother had inhaled burning plastic from a nearby dump.

A team of students and local experts helped create the powerful visuals and campaign. The panchayat was convinced and made the campaign its own. Soon it became a peoples’ movement, and hence emerged the Green Brigade – a group of volunteers checking on people littering the streets.

Penalty for violation of plastic ban

“We also realised that we had to show our seriousness to people who disregarded the ban.” Supriya explained: “So we began imposing fines. Ten rupees for every plastic bag being used publicly. Everyone hates being fined.” It’s not the amount, but the indignity and embarrassment of being fined that irks people.

Soon word spread like wildfire that one of the oldest, most prestigious shops in Ooty, the district capital, had been fined Rs 5,000. There was an uproar. Traders and shopkeepers realised it was not a joke. The ban became successfully implemented overnight.

The upside was the reappearance of the ubiquitous yellow cloth bag, which in the old days, was omnipresent and cherished by every Indian household. Old Nilgiris residents leaving home on a shopping expedition, mostly  grocery shopping, as consumerism was not rampant a few decades ago, always sallied forth with the yellow cloth bag rolled up and placed in their pocket. Accompanied, of course, by the mandatory umbrella, since Ooty has a reputation for sudden showers. The State Bank of India in a wonderful gesture, sponsored a yellow bag campaign and revived the tradition.

The government launched a scheme to provide employment. Women’s self-help groups and old people were trained to sew inexpensive jute shopping bags. Shopkeepers earned goodwill by giving these out for free.

Even during the early COVID-19 lockdown days, the Nilgiris was the only district to distribute free food grains in cloth bags. Government officials were given orders to create employment by ordering these bags from women’s groups. Creating livelihoods in an environmentally friendly manner was a conscious decision.

The Green brigade continues its work.

But, Indian tourists throw plastic cold drink bottles, wrappings and other non-degradable junk at every beach, hill station and holiday resort, without the slightest regard for the large hoardings. Perhaps, a penalty of a few thousand rupees for each litterbug may help stop this habit.

Tamil Nadu is a pioneer in the field of banning single-use plastic altogether. Himachal Pradesh was the first Indian state to ban single use plastic followed by Sikkim.

But, what can consumers do if milk arrives in plastic packets? Alternatives must be provided for packets carrying biscuits, sweets, and savoury snacks. Change is coming slowly, though painfully and incrementally, as many private dairies are now going back to selling milk in bottles.

If the government is serious about eradicating the scourge of plastic, laws and fines have to be put in place. Punitive action is imperative. But for people to internalise it, NGOs, governments, and corporates though CSR drives, must educate the public effectively on a mammoth scale.

Sweden is totally plastic-free. Germans are highly conscious of their environment. But ultimately, only if it becomes a peoples’ movement and most importantly, if plastic can be banned at source, will we succeed in stopping plastic pollution. Hopefully, it will be sooner, rather than later.