Villagers in Maharashtra’s Latur district are baffled by the heavy and intense hailstorms in summer that have hit them this past decade. 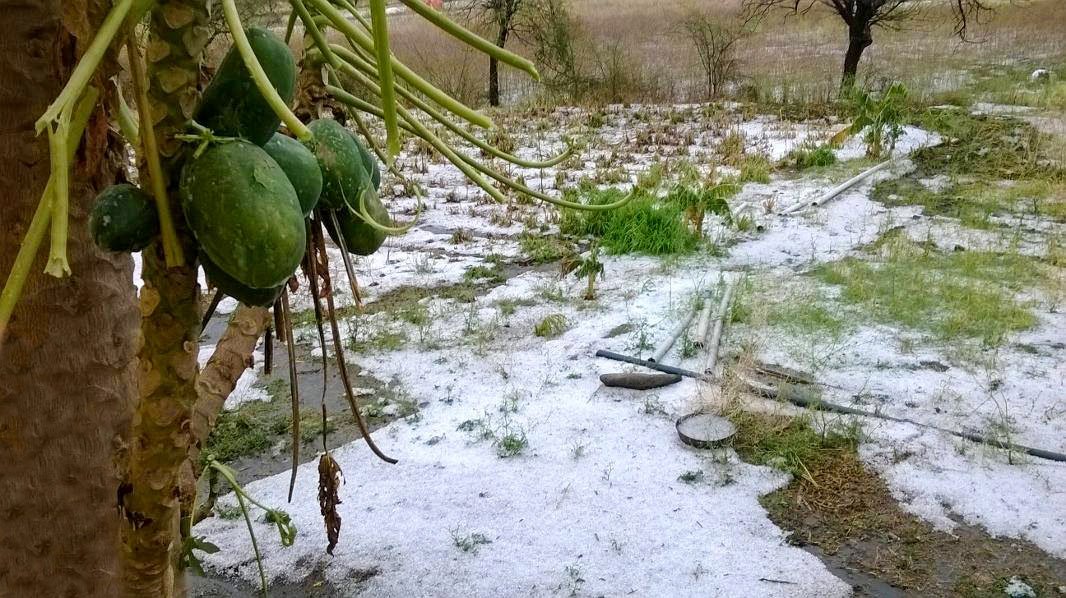 His roof didn’t quite come down on him, but it did chase Gunwant around his farm. That image remains vividly etched in his mind. “The tin-roof of the shed on the edge of our land was torn off and came flying towards me,” he recalls. “I hid under a pile of hay and managed to come out injury-free.”

It isn’t every day you get chased by a roof. The one Gunwant Hulsulkar was running from in Ambulga village had been ripped off by deadly winds accompanying a hailstorm there this April.

Emerging from under the hay-pile, Gunwant, 36, could barely recognise his own farm in Nilanga taluka. “It couldn’t have lasted more than 18-20 minutes. But the trees had fallen off, dead birds were scattered around, and our livestock was badly injured,” he says, pointing to the damage-marks left by the hailstorm on the trees.

“There is a hailstorm or unseasonal rain every 16-18 months,” says his mother Dhondabai, 60, sitting on the steps outside her two-room stone and mortar house in Ambulga. In 2001, her family shifted from cultivating pulses (urad and moong) to nurturing mango and guava orchards across their 11 acres. “We need to look after the trees through the year, but an extreme weather event of just a few minutes destroys our entire investment.”

It wasn’t a one-off phenomenon that occurred this year. Extreme weather episodes, including torrential rainfall and even hailstorms, have showed up in this part of Maharashtra’s Latur district for over a decade now. Uddhav Biradar’s small one-acre mango orchard, also in Ambulga, collapsed in a 2014 hailstorm. “I had 10-15 trees. They died with that storm. I made no effort to revive them,” he says.

“The hailstorms continue,” 37-year-old Biradar adds. “It was painful to see the trees after the storm of 2014. You plant them, take care of them, and then they are blown away in minutes. I do not think I could go through all this again.” 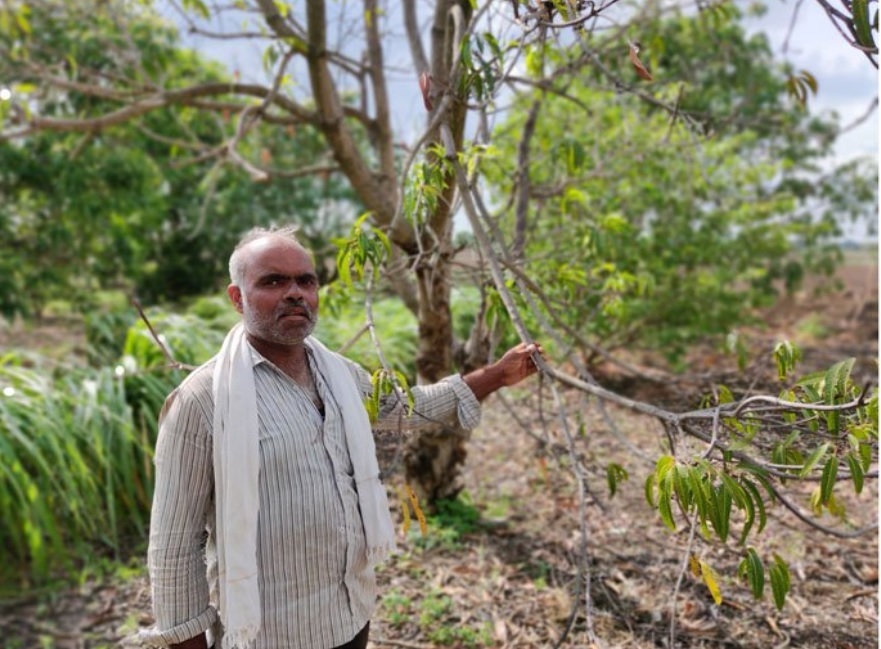 Hailstorms? In Latur district of the Marathwada region? This is a place where, for well over half the year, the mercury is at or above 32° C. The latest hailstorm struck in the first week of April this year when temperatures ranged between 41-43° C.

But as almost every farmer here will tell you in exasperation, they can no longer figure out the behaviour of the taapman, havaman and vatavaran (temperature, weather and climate).

What they do comprehend is that the number of rainy days annually has dropped, while the count of hotter days has risen. In 1960, the year Dhondabai was born, Latur could expect at least 147 days annually that would see temperatures of 32° C or above, as data from an app on climate change and global warming posted by the New York Times shows. This year, that would be 188 days. When Dhondabai turns 80, there could be 211 of these very hot days. 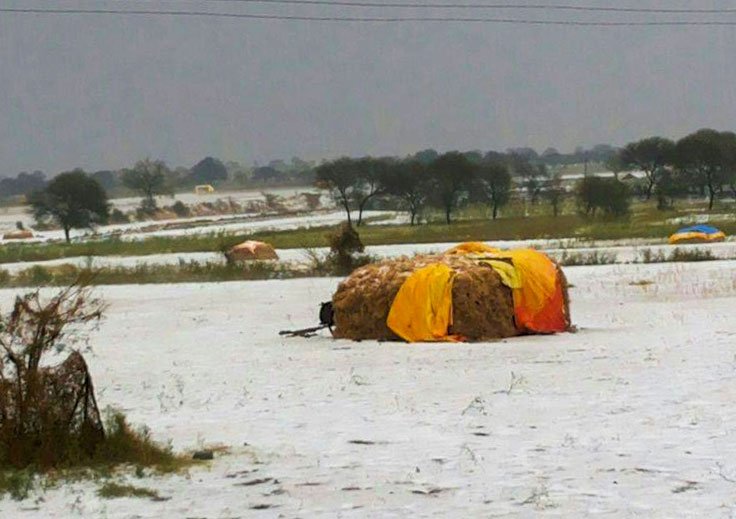 The latest hailstorm struck in April this year when temperatures ranged between 41 and 43 degrees. Photo: Nishant Bhadreshwar/ People’s Archive of Rural India

“It’s hard to believe we are approaching the end of July,” Subash Shinde told me when I visited his 15-acre farm in Ambulga last month. The farm looks barren, the soil is brown and bears not a hint of green buds. Shinde, 63, takes out a handkerchief from his white kurta and soaks off the sweat from his forehead. “I usually sow soybean by mid-June. This time around, I might stay away from the kharif season altogether.”

Farmers like Shinde, in this 150-kilometre stretch linking southern Latur to Hyderabad in Telangana, mainly cultivate soybean. Till around 1998, Shinde says, jowar, urad and moong were the primary kharif crops here. “Those required consistent rainfall. We needed a timely monsoon for a decent harvest.”

Shinde and most others here shifted to soybean around the year 2000 because, he says, “it is a flexible crop. If the weather patterns change a bit, it does not collapse. It was attractive in the international market as well. We ended up saving money at the end of the season. Plus, the post-harvest leftovers of soybean could serve as animal fodder. But over the past 10-15 years, even soybean has not been able to deal with the erratic monsoons.” 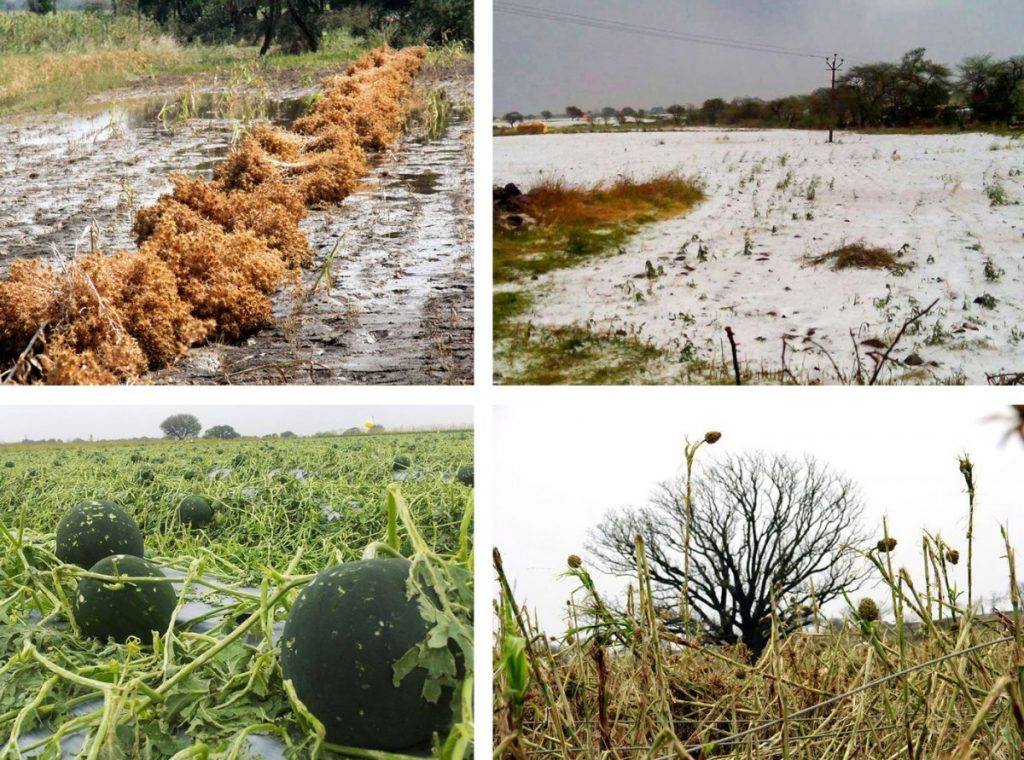 And this year, “those who have sown their crops are now regretting it,” says G. Sreekanth, collector, Latur district. “Because the initial showers have been followed by a dry spell.”  There has been only 64% sowing (all crops) across the district. In Nilanga taluka, 66%. Obviously, soybean, which accounts for over 50% of the total cropped area in the district, has taken a big hit.

Latur is in the agricultural region of Marathwada and has a normal annual average rainfall of 700 mm. The monsoon arrived on June 25 this year and has been erratic since. At the end of July, Sreekanth told me that there had been a 47% shortfall below the normal rainfall for that period.

In the early 2000s, says Subash Shinde, an acre of soybean yielded 10-12 quintals on an investment of around Rs 4,000. Nearly two decades later, the price of soybean may have doubled from Rs 1,500 to Rs 3,000 a quintal, but, he says, cultivation costs have tripled and per acre output has halved.

Madhukar Hulsulkar, 63, Dhondabai’s husband, points to another feature of the present decade. “Since 2012, our use of pesticides has increased a lot. Just this year, we have had to spray 5-7 times,” he says.

Dhondabai chips in with more insights on the changing landscape. “We used to come across kites, vultures and sparrows regularly earlier,” she says. “But for the past 10 years or so, they have become rarer and rarer.” 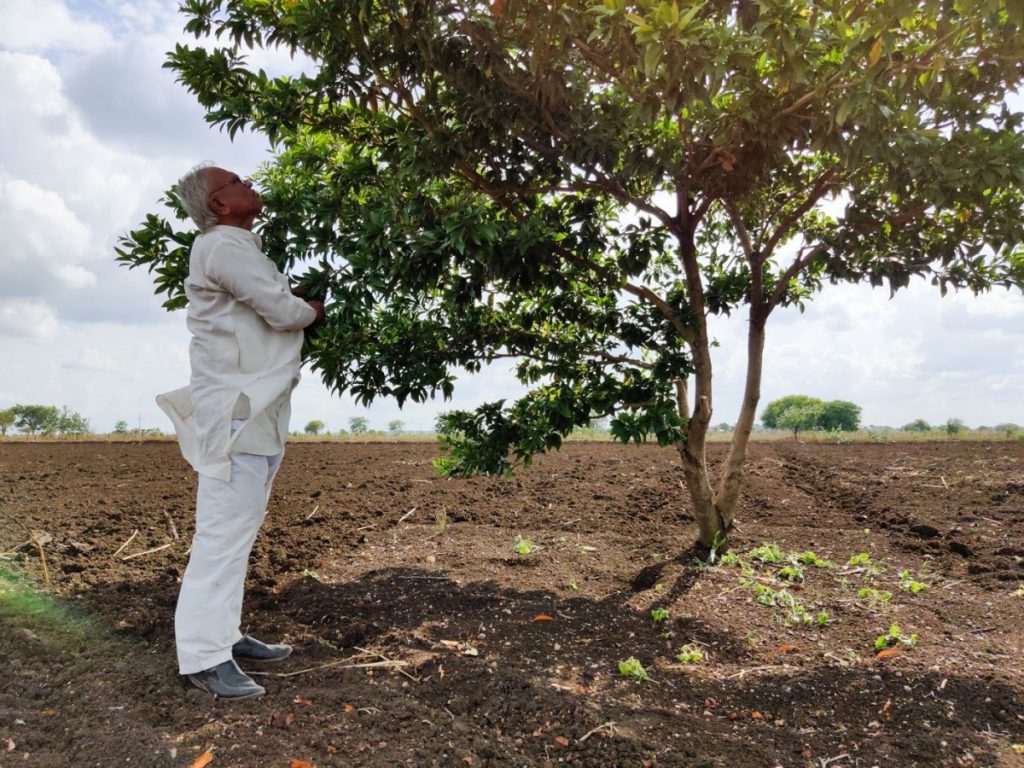 Madhukar Hulsulkar under his mango tree: ‘Since 2012, our use of pesticides has increased a lot. Just this year, we have had to spray 5-7 times’. Photo: Parth M.N./People’s Archive of Rural India

“Pesticide use in India is still below one kilogram per hectare,” says Atul Deulgaonkar, Latur-based environmental journalist. “The US, Japan and other advanced industrial nations use 8-10 times as much. But they regulate their pesticides, we do not. Ours contain cancerous elements, which affect the birds around the farm. It kills them.”

Shinde blames critical changes in climate patterns for the productivity drop. “We used to have 70-75 rainy days in the four-month monsoon period [June-September],” he says. “It would drizzle, consistently and gently. In the past 15 years, the number of rainy days has halved. When it does rain, it pours maddeningly. And that is followed by a 20-day dry spell. It is impossible to farm in this weather.”

The India Meteorological Department’s data for Latur support his observations. In 2014, rainfall in the four monsoon months was 430 mm. The next year, 317 mm. In 2016, the district got 1,010 mm in those four months. In 2017, that was 760 mm. Last year, Latur got 530 mm in the monsoon season, of which 252 mm came in the single month of June. Even in the years where the district receives its ‘normal’ rainfall, the spread and dispersal have been most uneven.

As Chandrakant Bhoyar, senior geologist with the Groundwater Surveys and Development Agency, points out: “Torrential rainfall in limited time results in soil erosion. When, instead, it drizzles consistently, that helps the groundwater recharge.”

Shinde can no longer depend on groundwater because his four borewells are, more often than not, dry. “We used to strike water at 50 feet, but now even borewells 500 feet deep are dry.”

That throws up other problems. “If we do not sow enough, there is no fodder for the animals,” says Shinde. “Without water and fodder, farmers are unable to maintain their livestock. I had 20 head of cattle until 2009. Today, just nine.” 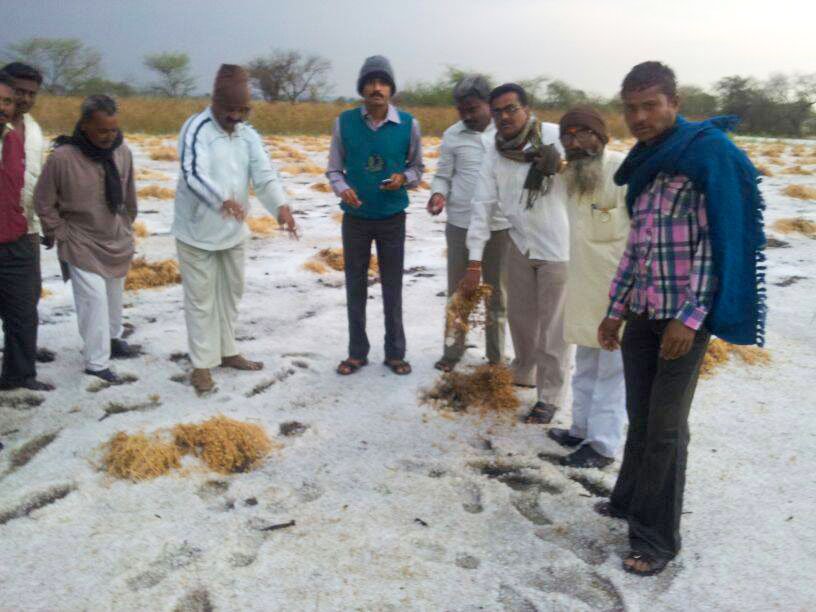 his is in Latur district of Marathwada, where for more than six months it’s above 32 degrees Celsius. Photo: Nishant Bhadreshwar/ People’s Archive of Rural India

Shinde’s mother, Kaveribai, still sharp and alert at 95, says “Latur was a hub of cotton since Lokmanya Tilak introduced it here in 1905.” She sits on the floor with folded legs and needs no help to get up. “We used to have ample rainfall to cultivate it. Today, soybean has taken its place.”

Shinde is happy his mother gave up active cultivation around two decades ago – before the hailstorms began. “They devastate the farmland within a few minutes. The biggest sufferers are those who own orchards.”

In this relatively better-off southern belt, orchard-growers have indeed been particularly hit. “The last hailstorm came in April this year,” says Madhukar Hulsulkar, taking me into the orchard where many yellow spots are visible on the tree trunks. “I lost fruit worth Rs 1.5 lakhs. We are down to 50 trees from the 90 we began with in 2000.” Now he’s considering giving up on orchards as “the hailstorms are becoming inevitable.”

Latur has, over a century, seen many shifts in cropping patterns. Once dominated by jowar (sorghum) and other millets, and to a lesser extent maize, it took to cotton in a big way from 1905.

Then came sugarcane from 1970, sunflower briefly, and large-scale soybean cultivation from 2000. The spread of cane and soybean was quite spectacular. In 2018-19, cane covered 67,000 hectares (say data from the Vasantdada Sugar Institute, Pune). And from one sugar factory in 1982, Latur now has 11. With the cash crops came the inescapable borewell explosion – there is no count of how many have been drilled – and intense groundwater exploitation. Over 100 years of cash cropping in a soil historically attuned to millets has had its inevitable impacts on water, soil, moisture and vegetation.

Also, forest cover in Latur is just 0.54%, says the state government website. Below even the pathetic Marathwada-wide average of 0.9%. 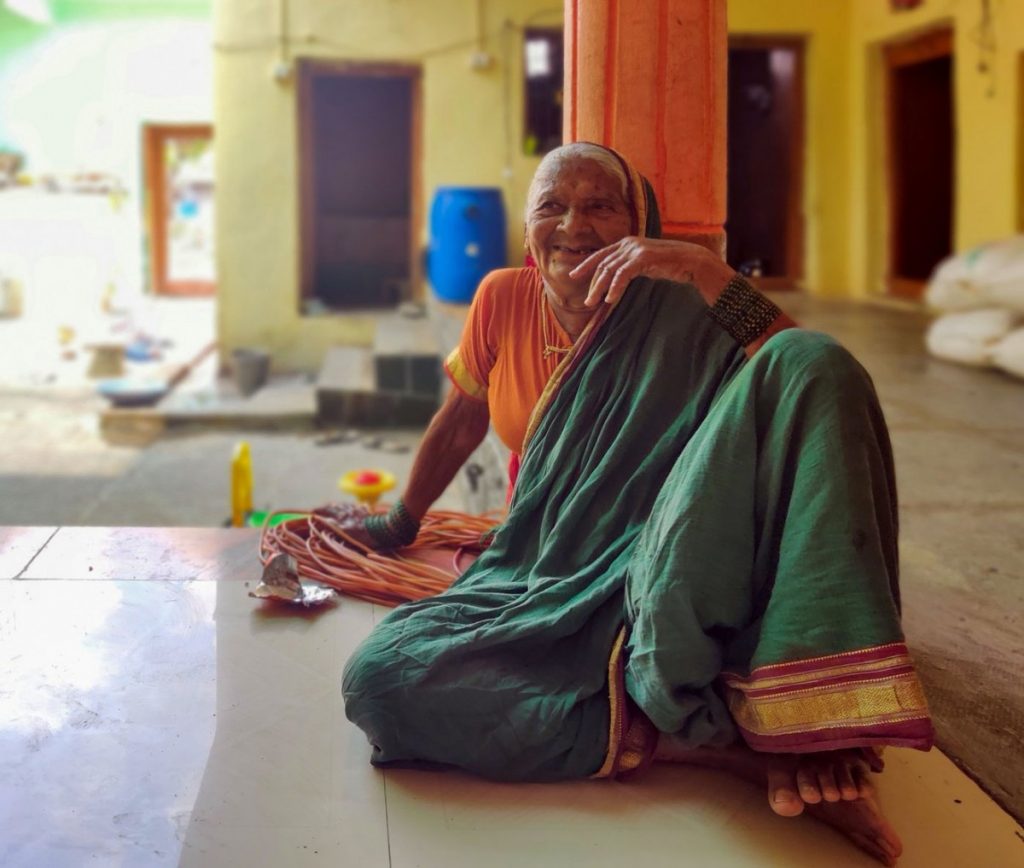 Kaveribai Shinde, 95, recalls, ‘Latur was a hub of cotton… We used to have ample rainfall to cultivate it’. Photo: Parth M.N./People’s Archive of Rural India

“It would be wrong to make a narrow causal equation between all these processes and climate change,” says Atul Deulgaonkar. “And difficult to support with hard evidence. Also, such change occurs across large regions and not within the human-drawn boundaries of a district. Marathwada, of which Latur is a small part, is experiencing profound changes in some ways linked to growing agro-ecological imbalances.

“But some correlation between the multiple processes does seem to exist across the larger region. And it is intriguing that extreme weather episodes and hailstorms really arrived and surged a decade after the last big crop shift and major changes in land use and technologies. Even if human activity cannot be condemned as the cause, it certainly contributes in significant measure to the climatic imbalances we’re seeing.”

Meanwhile, people are bewildered by the rising number of extreme weather episodes.

“Every agricultural cycle puts farmers under greater stress,” says Gunwant Hulsulkar. “That’s one of the reasons behind farmers suicides. My kids would be better off working as clerks at a government office.” His perspective on farming has changed with the climate.

“Agriculture increasingly seems a waste of time, energy and money,” says Subash Shinde. It was different in his mother’s time. “Farming was our natural choice,” says the effusive Kaveribai.

When I bid Kaveribai farewell with a namaste, she offers me a handshake instead. “Last year, my grandson saved money and made me travel on a plane,” she says with a proud grin. “This is how someone greeted me on the flight. The weather is changing, I thought our greeting habits should also change.”

This article was originally published in the People’s Archive of Rural India on August 26, 2019.

PARI’s nationwide reporting project on climate change is part of a UNDP-supported initiative to capture that phenomenon through the voices and lived experience of ordinary people.