The world’s first trading programme for particulate air pollution in Surat is expected to reduce air pollution at a low cost to both industries and the government.

The western state of Gujarat has launched the world’s first trading programme for particulate air pollution. The pilot, launched on World Environment Day in June this year, replicates a market-based system. The government sets a cap on emissions and allows industries to buy and sell permits in order to stay below the cap. This is similar to a system that successfully reduced acid rain in the United States in the 1990s.

The pilot programme was put in place in the city of Surat, a densely populated industrial belt where textile and dye mills contribute to air pollution. As the first market-based approach to regulating pollution emissions in India, it is expected to reduce air pollution at a low cost to both the government and the industry, as well as pave way for replicating similar trading schemes to reduce all kinds of unwanted emissions.

According to an official release by the Energy Policy Institute at the University of Chicago (EPIC), the emissions trading programme builds on another early innovation by the Gujarat Pollution Control Board (GPCB), the use of continuous emissions monitoring systems to track industrial emissions in real-time. About 350 industries around Surat have installed continuous emissions monitoring systems and now transmit real-time, high-quality data on emissions. The new scheme will complement this technology-supported approach to monitoring.

The GPCB is carrying out the emissions trading programme with the help of a team of researchers, including Michael Greenstone and Anant Sudarshan from EPIC, Rohini Pande from the Evidence for Policy Design at the Harvard Kennedy School, Nicholas Ryan from the Economic Growth Center at Yale University and others from The Abdul Latif Jameel Poverty Action Lab (J-PAL). The researchers are evaluating the programme’s benefits and costs in relation to the status quo, using a randomised controlled trial.

At the launch of the programme, Rajiv Kumar Gupta, chairman of GPCB, said, “With this programme, we are kicking off a new era of cleaner production that would lower industries’ compliance costs and reward plants that cut pollution using low-cost methods. We believe that using this market-based system will contribute to rapid economic growth, ease the method of doing business, as well as help people breathe clean air.”

Nicholas Ryan, assistant professor of economics at Yale and a member of the research team, added, “Emissions trading can help bring down pollution at a reasonable cost, hence such environmental regulations can be successfully implemented.”

Globally, the cap-and-trade systems have been used to reduce other forms of pollutions such as the programmes in the United States that have helped to successfully reduce sulphur dioxide (SO2) and nitrogen oxides (NOx) in the air.

According to the Air Quality Life Index (AQLI) produced by EPIC, particulate air pollution impacts life expectancy as it cuts short global life expectancy by about 2 years. The AQLI calculates that life expectancy in India would increase by 4.3 years if the country’s air meets the guidelines set by the World Health Organisation.

Under the trading scheme, the regulator will initially allocate each plant a fixed number of permits that would earmark the quantum of emissions the plant is permitted. Since the total number of permits is fixed, the total volume of polluting emissions is also fixed. This is being done to ensure that the quality of air is maintained and peoples’ health is protected.

Once the industrial units are given an initial allocation, they have the freedom to buy or sell these permits. This means that those industries that can reduce emissions to below their permissible limits can sell their excess permits to other factories. Likewise, plants that find it very expensive to reduce emissions can choose to buy these permits.

However, their emission levels are recorded in real-time using continuous emissions monitoring systems and at the end of the specified period industries must have enough permits in hand to cover their costs. Not doing so would invite environmental damage-compensation-charges, which will be more expensive than it would have been to buy the necessary permits during the compliance period.

In the history of cap-and-trade programmes, market forces have known to reduce costs that industries incur when complying with regulations which could facilitate industrial growth while maintaining air quality.

Why Gujarat was chosen

Clarifying as to why the state of Gujarat, and more specifically, the city of Surat had been chosen for the project, Anant Sudarshan, South Asia Director of the Energy Policy Institute at the University of Chicago (EPIC), told Mongabay-India: “This project was conceptualised by the Ministry of Environment, Forest and Climate Change (MoEFCC) in 2013, after which the GPCB took up the challenge of implementing it. For this, the GPCB availed the expertise of a team of researchers from top academic institutions to design and measure the impact of the project.”

“Most manufacturing units in the industrial cluster of Surat fall under 17 highly polluting categories, the most important reason why the GPCB had selected Surat for the pilot project. ETS is the result of a multi-year process in which the first phase was setting up the CEMS framework as a pilot cluster and using it for effective regulation,” he said.

According to Sudarshan, trading schemes would reduce the expenses that manufacturing units would incur for reducing pollution, as well as make it very difficult for them to violate regulations. Both these factors would help ensure compliance and thereby reduction of pollution. 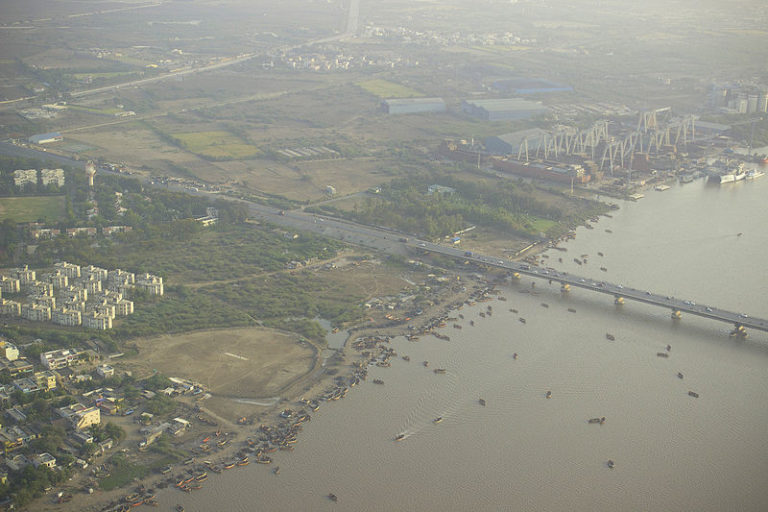 The National Clean Air Programme (NCAP) proposed in 2018-19 seeks to address the air quality information gap in 102 cities by expanding the monitoring programme to urban and rural areas, building an emissions inventory and apportioning the contribution of various sources, to establish an actionable plan to reduce air pollution levels by 20% to 30% by 2024.

Particulate air pollution is possibly one of the greatest external threat to human health globally, according to the Air Quality Life Index and Global Burden of Disease. On whether the new initiative would address this problem, Sudarshan believes that particulate air pollution is shortening lives in India too, and so if this pilot project is successful, it would give the country an opportunity to scale up emissions trading, thereby reducing industrial pollution.

The key benefits of emissions trading are that it minimises the costs to industry on reducing pollution and maximises flexibility, even as it ensures that pollution limits are not breached, he concludes.