Are India’s Cities Planning to Be Victims of Climate Change? A Tale From Gujarat

An excerpt from 'Despite the State: Why India Lets Its People Down and How They Cope' by M. Rajshekhar, published by Westland/Context. The following is an unedited excerpt, published with permission, from Despite the State: Why India Lets Its People Down and How They Cope by M. Rajshekhar, published by Westland/Context, January 2021.

India’s track record on climate adaptive/mitigative urban planning has been dismal. Most buildings and houses use construction material that absorb heat and drive up cooling costs. Cities have low and decreasing tree cover, and rising hard spaces. As Bangalore found in 2017, even after heavy rains, there is little groundwater recharge. In city after city, lakes, which can recharge groundwater, are being killed through real estate development. Little thought is given to water supply. Instead, as water scarcities loom, cities source water from farther and farther away. Peri-urban areas are a different kind of a nightmare. In state after state, panchayat presidents have allowed even five- to seven-storeyed buildings outside municipal boundaries. ‘When the municipal corporation expands its limits, it finds these strange places where buildings are standing, but there are no roads, water supply or sewage,’ said G.K. Bhat, the founder of Taru, an environmental consultancy based in Ahmedabad. ‘The whole place works only on groundwater.’

Against this wider landscape of climate catastrophe, Gujarat claimed to be a leader. Its cities had plans that sought to manage the worst fallouts of climatic stress. Ahmedabad had a roadmap for heat waves. Surat had a blueprint to tackle floods.

Climate change was adversely affecting Gujarat too. On the one hand, the frequency of extreme events, like heavy rains and floods, was rising. On the other, the state was also seeing subtler changes like gradual increases in temperature. Think of the first as a shock. The second as a stress.

Shocks and stresses pose different challenges for a city. Shocks come with cascading fallouts. Heavy rains first cause traffic jams, then flooding, and then, if conditions do not improve, the city starts shutting down. ‘Cities depend on networks—a flow of milk, a flow of food, cash for ATMs,’ said Bhat. ‘As one urban system fails, it incapacitates the others. And cities see a progressive network failure.’ He was in his office in a high-rise near the Ring Road. As Ahmedabad rushed towards work far below, he drew an analogy with living systems. ‘These [urban failures] are not independent failures, but multi-organ failures. Every failing organ incapacitates the rest, reaching social unrest and epidemics in its higher reaches.’

Also read: What Delhi Tells Us About Neoliberalism

Stresses, on the other hand, trigger a spiral. Days were getting hotter in Ahmedabad, for instance. In May 2016, the mercury touched 50º C. The previous high had been 47.8º C in 1916. The difference between day and night-time temperatures was falling as well. ‘At one time, even if the mercury went up to 45º C, nights were pleasant and temperatures came down to [between] 25º C and 26º C,’ said Saswat Bandopadhyay, a lecturer in the Department of Planning at Ahmedabad’s CEPT University. ‘But now,’ he added, ‘they [difference between day and night-time temperature] come down just half as much, to [between] 32º C and 34º C.’ In response, those who could afford it installed air-conditioners, which warmed up the city further.

Zoning is one way to respond to such challenges. A city vulnerable to floods needs spaces where the water can pool, and one facing high temperatures needs more cooling green cover. Urban planning is a good place to see how adaptation and mitigation were being mainstreamed in Gujarat, one of the most urbanised states in the country.

Rajkot, the fourth-biggest city in Gujarat—after Ahmedabad, Vadodara and Surat—located in the centre of the Saurashtra region, was urbanising fast. People, pushed by the state’s weakening rural economy and pulled by Rajkot’s industrial and service economy, were flocking here. The city, like the rest of the Saurashtra region, was low on water. Its development plan for 2031 says: ‘[Rajkot Municipal Corporation] is able to supply only 20 minutes of water daily as against the benchmark of 24 hours.’ Here is what I found during Ear to the Ground on how the city was doing on adaptation and mitigation:

On some fronts, Rajkot is doing well. To make the city more energy-efficient, Rajkot’s Municipal Corporation has made solar heaters mandatory. Rainwater harvesting is mandatory too. These efforts, however, are undercut by other decisions. As it expands, Rajkot is leaving very little room for environmental sinks like green zones. As a city grows, it should leave about 30% of its surface area for green zones and environmental sinks, said Mahesh Rajasekar, a former environmental consultant with Taru. ‘What holds true for a nation also holds true at a smaller, ward level.’

But Rajkot’s old city has a green cover of about 2%, and its periphery does not fare any better. 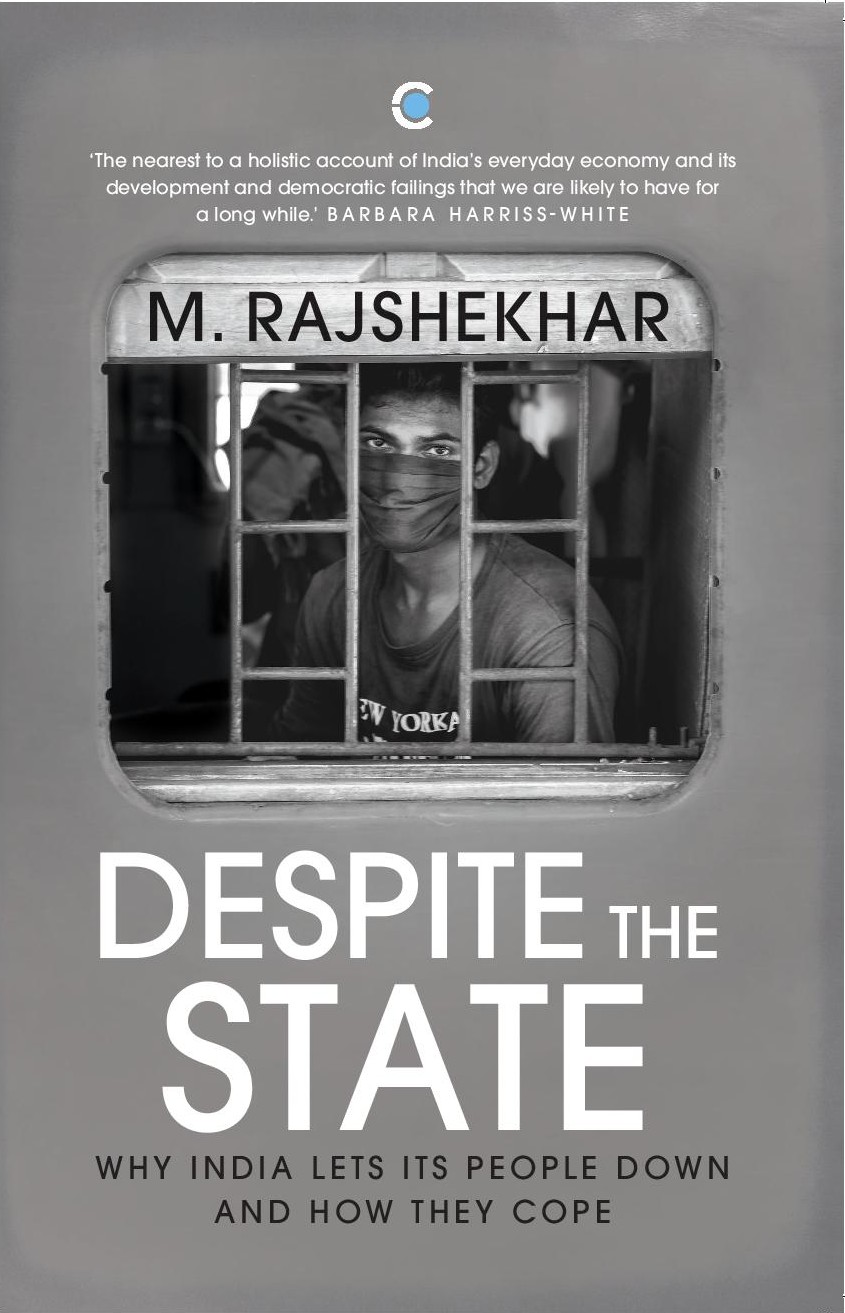 Despite the State: Why India Lets its People Down and How They Cope
M. Rajshekhar
Context, 2021

Try to understand why the city took some measures but not others, and you will arrive at a curious division of labour. In 1973, when Rajkot became a municipality, its municipal corporation was responsible for urban planning. That changed in 1976, when Gujarat passed the Gujarat Town Planning and Urban Development Act. Following this, urban development authorities were set up in Gujarat’s biggest towns, and planning responsibilities were divided between these new bodies and the municipalities.

While municipalities would handle town plans, the urban development authorities would draw up development plans. The difference is one of scale. Development plans work on larger areas—required for planning the city’s expansion—and look twenty to thirty years into the future. They map the broad contours of a city such as residential, industrial and green zones and road networks. Town plans, on the other hand, flesh out development plans in more detail, and work on shorter timeframes.

At Dholera, pitched as India’s first smart city, Gujarat used eminent domain—the power of the State to appropriate private property for public use—to acquire land. Not so in Rajkot. Here, land ownership stayed with individuals. The only restriction on how landowners used their land was zoning. This resulted in authorities coming under pressure to allot land for profitable uses. There was, said an official, a lot of pressure to not zone land as green. It is not surprising that land owners lobbied. Urbanisation unlocks land values and can make people wildly rich. But such zoning makes the city vulnerable to climate change.

‘India’s democratic architecture for a town means it should be run by the urban municipal corporation, which reports to locally elected councillors,’ said Bandopadhyay. However, what Gujarat created, through the urban development authorities, was a system run by bureaucrats who reported to the Urban Planning Department and the Chief Minister’s Office, leading to a political capture of municipal functions.

Eight of the ten members in the Rajkot Urban Development Authority (RUDA) board were bureaucrats. Their decisions, complained RUDA planners, were overruled by Gandhinagar. This was corroborated by Nilesh Virani, president of the Rajkot Zilla Parishad and a board member of RUDA: ‘If a politician is the chairman, the interference will be visible. So, they only make bureaucrats the chairman.’

The deeper game plan is clear enough. Politicians can monetise urbanisation in two ways. One way is to enter the real estate business, and the other is to extract rents from favourable zoning decisions. Compounding matters, lines between the party and landowners blurred as well. ‘Rajkot has ten to fifteen major groups who are very active in politics, the builder space and education,’ said Kaushik Mehta, the editor of Phulchhab, a Gujarati language newspaper headquartered in Rajkot.

This engendered, yet again, an outcome where gains were privatised but costs were public. The cities that emerged from this planning process, said Bandopadhyay, had basic infrastructure like roads, water and drainage but showed little attention to related questions like public health. The hydrology of these spaces was completely distorted as well. Local water bodies were hemmed in. If a region came under the ‘no go’ area, influential people got it changed. ‘If there’s a water body, then no more than ten metres is left on either side,’ said Bandopadhyay. This increased the risk of flooding. At the same time, given the lack of attention given to water supply while expanding, these cities began depending on water imported from elsewhere. Each ward, said Mahesh Rajasekar, should have had a green space no more than a kilometre away. In Rajkot, however, green spaces lay in the periphery, even though the city was already heating up. A town planner with the Rajkot Municipal Corporation said: ‘Our summer temperatures are now around 46º C to 47º C. They are up by one degree.’

In all, Rajkot took small steps towards sustainability while drilling away at its ecological foundations. This is a wider critique. The state’s Climate Change Department rolled out programmes for LED lighting and made rainwater harvesting compulsory but stayed mum on wider deficiencies like inadequate green zones. ‘What you have in Gujarat is an outcome where the resilience and development plans do not talk to each other,’ said Bandopadhyay.

Such slips showed up repeatedly. Ahmedabad created a Heat Action Plan but continued to chop trees. By 2030, vegetation would cover just 3 per cent of the city’s area. Surat created plans on how to mitigate floods, but stayed silent when the Essar Group built an embankment that cut the delta of the Tapi, which flowed through Surat, by half. Or take Gujarat itself. It pushed projects like the Sardar Sarovar Dam, claiming water needs, but did nothing to curb water pollution in the state.