Through its order, the National Green Tribunal has settled a nearly 80-day old issue – but Sri Sri Ravi Shankar's foundation has challenged its assessment and the penalty amount. 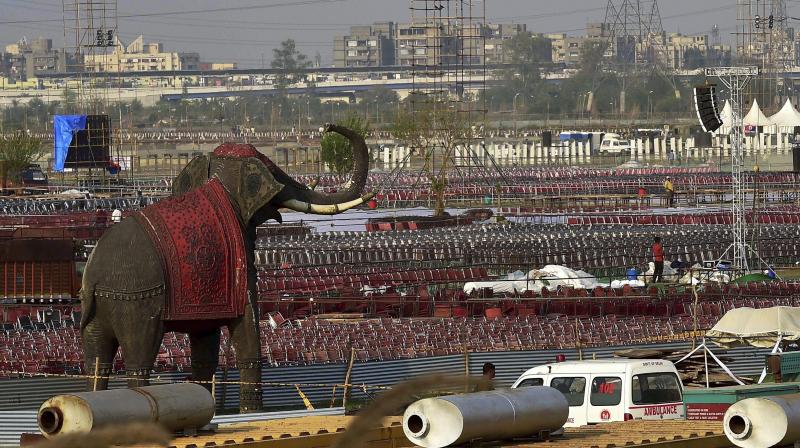 Preparations for the Art of Living festival that took place in March. Credit: PTI

New Delhi: The National Green Tribunal (NGT) has directed the Art of Living Foundation (AOL) to pay Rs 4.75 crores in cash to the Delhi Development Authority – the sum remaining of the penalty imposed on it for causing damage to the Yamuna floodplains while preparing for and hosting its World Culture Festival between March 11 and 13.

The panel struck down the AOL’s plea for accepting the amount through a bank guarantee. It also imposed on it a penalty of Rs. 5000 for filing unnecessary applications that lacked “bonafide.”

Although there was no word from the AOL in court on whether it would pay the amount or appeal the order in the Supreme Court, its founder Sri Sri Ravi Shankar tweeted that since his organisation had not caused any pollution while holding its festival, it would continue to fight “till the end for justice.” Through its order, the NGT bench, chaired by Justice Swatanter Kumar, settled the nearly 80 day-old issue.

On March 9, the Tribunal had imposed an interim Rs. 5 crore ‘environmental compensation’ fine on the AOL and penalties of Rs. 5 lakhs and Rs. 1 lakh on the Delhi Development Authority and the Delhi Pollution Control Committee respectively, for allowing the festival to take place on the floodplain, despite its clear directions on January 13, 2015, to not allow any construction in the environmentally-sensitive zone.

The NGT had further directed the AOL to pay the Rs. 5 crores prior to the commencement of the festival. This sum would then be adjusted against the total compensation, which would be determined on the basis of a report submitted by its Principal Committee within four weeks, it said.

The AOL submitted an amount of Rs. 25 lakh before the festival and stated that it would submit the remaining amount within three weeks. However, it went on to repeatedly plea for relaxations of the NGT’s order and failed to deposit the remaining sum.

Heading the NGT bench on May 31, Justice Kumar addressed the AOL: “Your conscience should be clear, let people say what they want to. You fulfil your obligations.” The AOL must now deposit the remaining amount within a week.

As for the question of the total value of the penalty, the NGT ordered the Principal Committee on May 25 to visit the site, assess the damage done and submit a report. However, when the panel tried to do this, it was stopped by the AOL on the grounds that cleaning operations were still underway.

The AOL subsequently questioned how the panel could judge such massive ecological damage on the basis of a mere viewing of the site. In a statement issued by its chief spokesperson Sonia Madhok, the AOL “objected to the existing expert committee led by Sashi Shekhar, and including AK Gosain, Brij Gopal and CR Babu” and to their “arbitrary figure of Rs. 120 crore based on a very brief and mere visual assessment without following the scientific process [sic].”

On Monday, May 30, the AOL moved a petition in the NGT demanding the committee be reconstituted. “The committee has pre-judged the issue and are under self-imposed pressure to justify that figure, creating a bias for itself [sic],” the petition alleges.

The NGT seeks a response from the petitioner, environmentalist Manoj Misra. The matter will be taken up after the summer.