Should a Government Team Accept the Hospitality of a Lohit Hydro Project Developer Agency?

Environmentalists raise concerns over 'conflict of interest' as a National Board for Wild Life team lands in Arunachal to study the ecological impact of the proposed dam, put on hold by the National Green Tribunal. 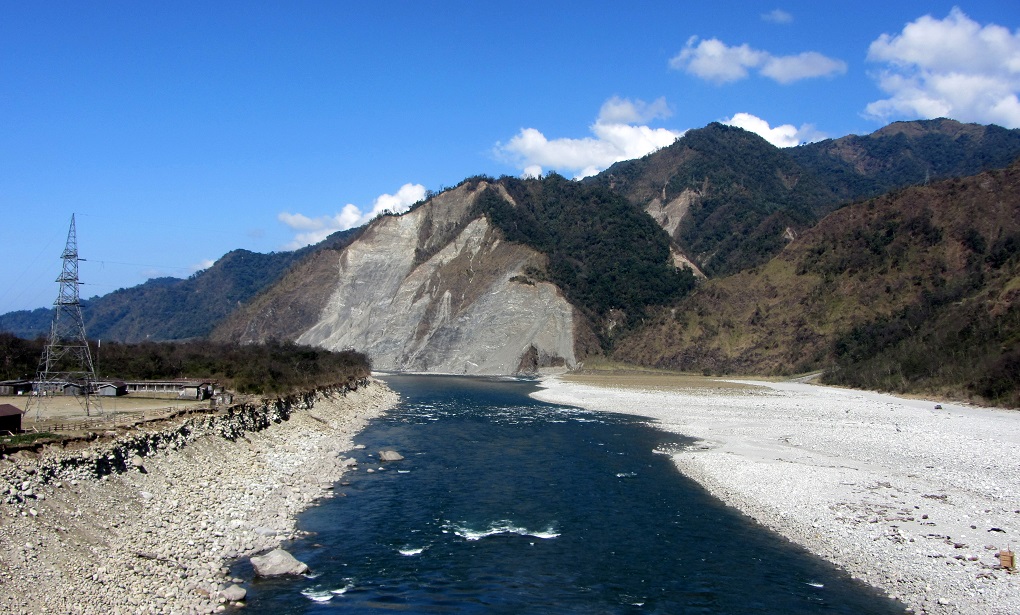 This spot downstream of the Parshuram Kund in winters, witnesses wall-to-wall flooding by Lohit river in the monsoon months. Credit: Nivedita Khandekar

The 1,750 MW Lower Demwe project on the Lohit river in Arunachal Pradesh is under re-consideration of the Standing Committee of the National Board for Wild Life (NBWL). And its team is staying at the guesthouse arranged by the company building the dam, the Athena Demwe Power Limited.

The three members of the NBWL Committee for site inspection – R.D. Kamboj from the Gujarat Ecological Education and Research (GEER) Foundation, D.P. Bankhwal from the National Tiger Conservation Authority (NTCA), and Gopi G.V. of the Wildlife Institute of India (WII) – are currently on a visit to an area called Parshuram Kund. This is near where the proposed project is to be built. No construction activity has taken place at the site except for some soil/rock tests and related activity.

As documented in government records and also mentioned on the website of the project proponent, Athena Demwe Power Limited, is a special purpose vehicle formed by Athena Energy Ventures Pvt Ltd (AEVPL), pursuant to a memorandum of agreement (MoA) signed by AEVPL with the government of Arunachal Pradesh in July 2007. On March 29, 2010, Athena Demwe Power Limited was converted into a public limited company. There are two stages to this hydro power project with a generation capacity of 1,750 MW (Demwe Lower) and 1,080 MW (Demwe Upper), both run-of-the-river projects.

The Demwe Lower project is just 8.5 kilometres from Kamlang Wildlife Sanctuary. Environmentalists have also expressed concerns over how the massive impact of the power generation plant will impact water flow in the Lohit river, seriously jeopardising the habitat of the Gangetic river dolphin, the national aquatic animal, up to 100 kilometres downstream from the project site. Lohit touches the southern side of the Dibru-Saikhowa National Park, which is about 60 kilometres downstream from the Lower Demwe project site.

While environmental clearance was granted in 2010; the Chennai bench of the National Green Tribunal had suspended the forest clearance on the grounds that “the clearance was not given after due procedure. According to a Supreme Court order, all projects within 10 kms of national parks and sanctuaries need clearance from the standing committee of the National Board for Wildlife (NBWL).”

All eight non-official members of the 12 member-NBWL standing committee had rejected the proposal while the four official members did not comment on the proposal during the meeting when the NBWL considered this project in 2011. Nevertheless, the clearance was given by the then minister of environment and forest and climate change, Jayanthi Natarajan.

This new forest clearance was challenged at the NGT’s Chennai bench, which in its judgment on October 10, 2017 had directed that, “In the absence of any reason but only to reject the majority of the non-official members who happened to be experts in the field… we have no hesitation to hold that the decision of the Minister as if it is the decision of the Standing Committee of NBWL, which forms the basis of the granting of FC in this case under the Forest (Conservation) Act, 1980, is not sustainable in law.”

The NGT had then directed the Standing Committee of the NBWL, “to re-consider the issue and pass appropriate orders within six months; and until then, suspended the Stages I and II Forest Clearances issued in March 2012 and May 2013 respectively and also the consequential order of the Arunachal Pradesh government allowing diversion of 1,415.92 ha [14.16 square kilometres] forest land for the hydel project.”

As per the minutes of the 47th meeting of the NBWL Standing Committee held on February 7, 2018, the Director of the GEER Foundation who is also also an ex-officio member of the NBWL, one representative of the WII and one representative of NTCA would visit the site and submit a detailed report to the Ministry within 30 days for further consideration. This serene spot near the upright crop of rocks in the middle of the river channel forms part of Parshuram Kund tank. Aligned to it, on the left bank, is the existing kund in the form of hot water springs. The Lower Demwe project will be exactly one km upstream of this spot. Credit: Nivedita Khandekar

The current visit is vital as the project proposal is being re-considered after NGT suspended the stage I & II Forest Clearance. Incidentally, all three – Kamboj, Bankhwal and Gopi – are government servants, two of them are serving officials in the Indian Forest Service. During the last visit by NBWL team, the members had stayed at Forest Department inspection bungalows at Tezu and Namsai, a place about 85-odd kilometres from Parshuram Kund. The nearest town, Wakro, just 16 kilometres away, does not have a forest department property but has an Arunachal state government’s Circuit House, which could have been arranged by the Forest Department for the visiting team.

The team passed the issue to local authorities. Bankhwal said, “We had written to Arunachal Forest Department and it is up to them to ensure our stay.”

The District Forest Officer, Koj Tasar, said the Wakro Circuit House was very badly maintained. “They don’t even have proper bedding. How can I keep my guests there?”

Gagan Agarwal, a senior officer with Athena Demwe Power Limited, said, “The government of Arunachal Pradesh has a 26% stake in this. So what is wrong if they stay with us?” They claimed that the previous team had also stayed with them in 2011.

Curiously, although they stayed at the guesthouse of the company building the project, they met none of the local residents. The team leader said their terms of reference did not involve meeting any stakeholders so they did not meet any locals. A bird’s eye view of the Athena Demwe Power Limited site office and residential places, including the guest house where the NBWL members have been put up. Credit: Nivedita Khandekar

Bimal Gogoi, the applicant in the NGT case, had made a submission on February 24, 2018 to the Minister for Environment, Forests and Climate Change, Harsh Vardhan, who is also the chairperson of the Standing Committee of the National Board of Wildlife, pointing out how the name of the user agency have been recorded incorrectly in the minutes of the 47th and 46th meeting of the NBWL. Instead of ‘Athena Demwe Power Limited’, the user agency, which is also the respondent in the NGT case, the official records stated the name of the parent promoter, which is in insolvency proceedings

“It is for the Standing Committee of the National Board for Wildlife to determine the exact legal position of whether a project of a User Agency undergoing insolvency due to non-payment of dues to a PSU bank can be considered for fresh clearance pending completion of the insolvency process,” Gogoi observed in his submission that was shared with thethirdpole.net.

As reported by the Arunachal Times, Athena Demwe Power Limited wants the government of Arunachal Pradesh to bail it out after the Indian Bank, a public sector bank, took them to the National Company Law Tribunal (NCLT) after the company failed to clear the debts amounting to Rs 3.34 billion.

The report also said that Arunachal’s Power department has claimed that “Athena wants the government to take over the project by increasing equity but since the state has no resources to spare, a decision was yet to be taken”.

Gogoi also pointed out to the site inspection carried out by Asad Rahmani, the then member of the NBWL in 2011 which documented the serious impact on ecological and cultural heritage site of Parshuram Kund. “Dropping the project will also help maintain a degree of longitudinal connectivity between the plains and uplands, considering the fact that a cascade of seven large hydroelectric projects proposed on the main Lohit river will lead to a serious fragmentation of the river. This will also help protect the environment in and around the cultural heritage site, Parshuram Kund.”

In fact in December 2014 Mahesh Sharma, the Minister of State in charge of Culture, had written to the then MoEF&CC Minister Prakash Javadekar on “the serious and massive impact the construction of the 1750 MW Demwe Lower project will have on the Parshuram Kund landscape.”  Sharma was, in September 2017, also made Minister of State (a junior colleague to Harsh Vardhan) of the MoEF&CC.

Gogoi’s most important submission is that the, “project components are 0.05 km (50 metres) away from the Kamlang sanctuary and not 8.5 km as claimed in minutes of 46th and 47th meetings of the standing committee of the NBWL.”

“The dam and related construction activities will indeed be carried out in a 1-2 km radius of the Parshuram Kund cultural and heritage site, but the project will have a 23-km long reservoir, which will submerge both riverine and forest habitat within 0.050 km (50 metres) of the boundary of the Kamlang sanctuary,” he pointed out.

Nivedita Khandekar is an independent journalist based in Delhi. She writes on environmental and developmental issues. She can be reached at nivedita_him@rediffmail.com or follow her on twitter at @nivedita_Him