Increasing awareness on the goodness of palm products and sustainable living associated with themhas brought hope to Tamil Nadu’s palm climbers, despite dwindling numbers of the state tree. 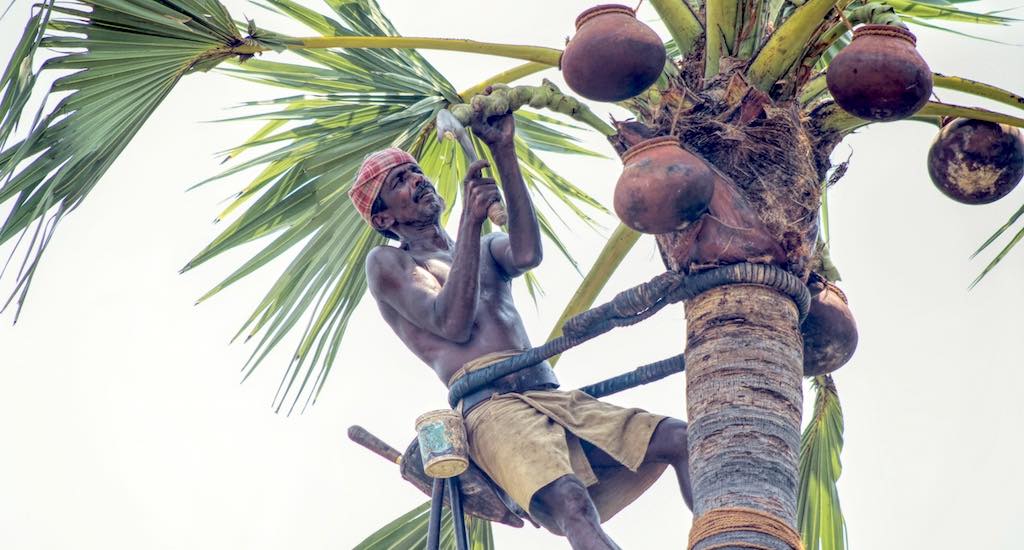 It was almost 6’o clock in the evening at Narasinganur village of Villupuram district in Tamil Nadu. With a thick belt encircling his hip and a palmyra tree, and a contraption that held his tools, 38-year-old Pandian Thevasagayam quickly climbed up the palm, Tamil Nadu’s state tree. He was climbing to tap the tip of the palmyra’s inflorescence into his pot one last time. He needs to slice off the tip at least thrice a day to prevent the sap from drying.

The pot in which he collects sap is laced with slaked lime to prevent fermentation of the palm nectar or neera into toddy. Over a cup of neera, he shared his story of becoming an organic farmer after attending training in Vanagam – Nammalwar Ecological Foundation, and of becoming a palm tree climber.

“Though we’ve been climbing palmyra trees for generations, my father didn’t want me to take it up as it is very strenuous,” Thevasagayam told VillageSquare.in. “But the tree drew me.” 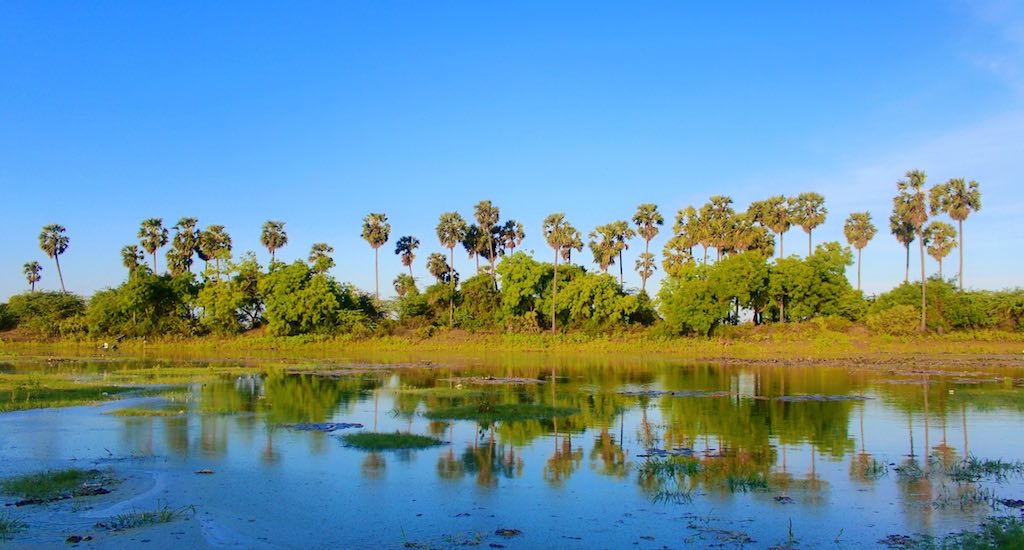 Palmyra trees that were a common sight in villages, seen around a pond. Credit: N. Balasubramaniam/VillageSquare.in

For 21-year-old Jenit of Pandaravilai in Thoothukudi district, it is the strenuous work that attracts him, making him feel fit. “Palms connect me to my roots and I can never quit climbing even if it means not getting a bride easily, as people still look down on manual labour,” he told VillageSquare.in.

It is not just social bias; rampant felling and altercations with police are also major deterrents to palm tree climbers, whose prospects have declined with the dwindling number of trees.

According to Tamil Nadu Palm Products Development Board, there are about 51 million palmyra trees in Tamil Nadu. But lakhs of trees have been cut for brick kilns and other industries, for as little as Rs 100 per tree, according to Thevasagayam.

However, with citizen initiatives to revive palm products and increase the tree cover, palm climbers are hopeful of a better future.

Nayambadi village in Thiruvanamallai district had two palmyra fields with more than 1,000 trees in each, in the village common grounds. “Even 30 years ago, villagers used to lease out the land to palmyra climbers who would create different products,” retired headmaster G. Krishnan told VillageSquare.in.

Villagers could not cut even one tree without permission from the village council. As palm products became irrelevant, people slowly started felling the trees to extend their farmlands. “Now, there is no trace of the palmyra fields that once graced our villages,” said Krishnan. “The trees around our fields are the only ones left.”

“The palm trees stood around our fields like a live fence but I never paid any attention,” said Thevasagayam. When he went through financial difficulties after losing his crops to floods and subsequent drought, he attended a palmyra conference in Chidambaram.

On a friend’s suggestion, Thevasagayam started tapping the palm trees around his field and now produces neera, palm sugar and other products such as toys and pencil boxes. “For farmers like me, palm trees that survive harsh climate provide an alternate, reliable source of income,” he told VillageSquare.in.

Dhandapani, a 43-year-old eco-activist of Nagapadi village in Thiruvannamalai district, said creating awareness about the goodness of palm products is the only way to protect the trees. For instance, unlike white sugar, the unprocessed palmyra jaggery is free of chemicals; its low glycemic index makes it a better option for diabetic patients. 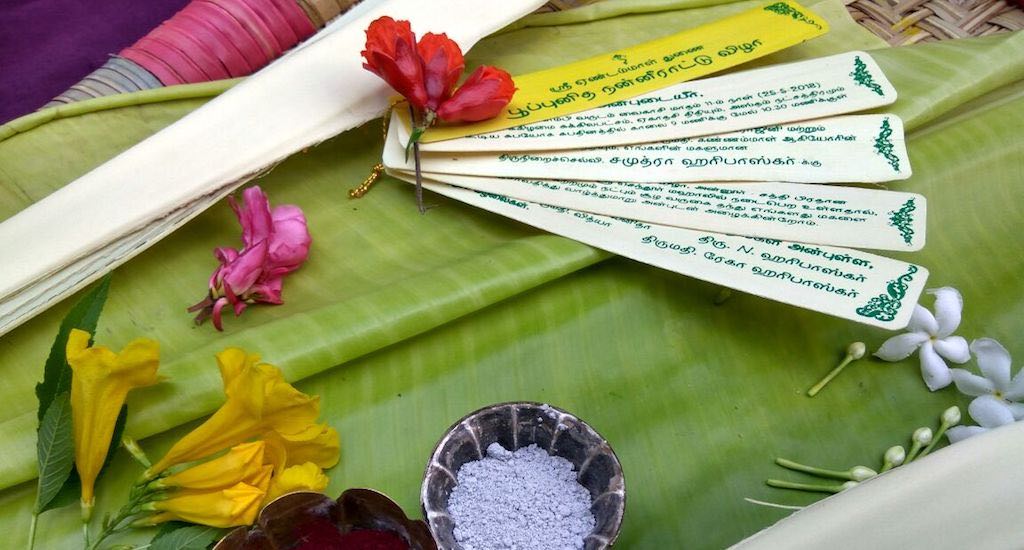 “Neera too has high nutritive value,” Dhandapani told VillageSquare.in.“We should create awareness about the goodness of neera and palmyra gur or jaggery through our school curriculum, documentary films and also by roping in stars to convey the message to the masses.”

Dhandapani suggested lifting the ban on toddy that has been in place in Tamil Nadu since 1991, to help the palmyra climbers economically. “When we sell products like cigarettes and liquor, why can’t the government regulate the sale of toddy, that was part of our food culture?” he said.

Being a climber, Sathiah has brought the palmyra workers in the state, who number about ten lakh, together. The Palmyra Workers Union meeting that he convened in Ramanathapuram in April, 2018 has placed some demands on the government.

Their demands include a ban on indiscriminate felling of trees, planting more trees around water bodies and wastelands, pension for palm workers above 60 years of age and recognising palm climbers as farmers.

Besides palm climbers, environmental and cultural activists too have come together in support of the tree. Raghunatha Boopathy, a young engineer, runs Panaigal Kodi, an initiative to plant 10 million palm trees across the state.

“When we decided to plant trees as a social initiative, we chose palmyra as it can survive harsh climate and needs very little care,” Boopathy told VillageSquare.in. Within a year, Panaigal Kodi volunteers have planted a few lakh trees across eight districts of Tamil Nadu. “We plant them near water bodies to prevent soil erosion.”

Retired botany professor D. Narasimhan agreed that palmyra trees are the best bet for reforestation in Tamil Nadu. “The trees are drought resistant and our ancestors used them on lake bunds and around fields to act as a wind break and to prevent soil erosion,” Narasimhan told VillageSquare.in.“These trees have survived even cyclones in the past.”

Palm trees are highly utilitarian. “Every part of the plant from roots to leaves can be used to prepare over 80 food products and hundreds of crafts,” said Boopathy. “If planned well, palm products could be used as a sustainable alternative for plastic.”

A farmer by profession, 29-year-old Saminathan who runs The Palm Climbers, a Facebook page in coordination with Semmai, an NGO, promotes sustainable living by selling palm products on the first Sunday of every month in Chennai. 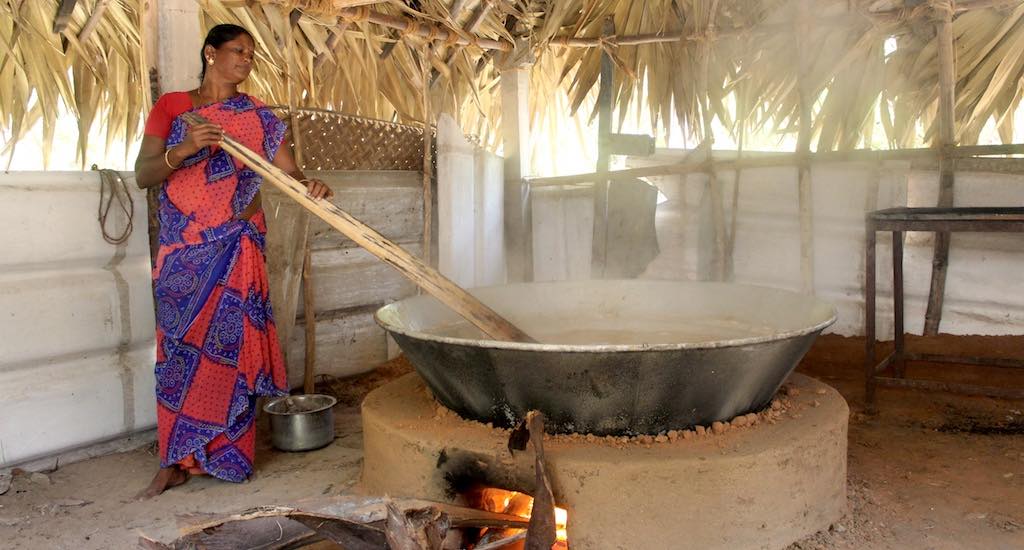 A woman boiling palm nectar, which she would continue to do for three hours, to make palm jaggery. Credit: N. Balasubramaniam/VillageSquare.in

They participate in fair trade markets too. The products range from planters, hats and toys to visiting cards. “While a regular team customises palmyra products based on demand, the others use our platform to sell whatever palm products they make,” Saminathan told VillageSquare.in.

Their other initiative is karupatti kaachuvom– Tamil for let’s make palm jaggery – that creates awareness among urban youth and serves as a direct selling platform. “As palm cases are used to hold liquor bottles in Goa after the plastic ban, we could try replacing the plastic baskets in temples with palm baskets,” he said.

“Our neighboring states Kerala and Andhra Pradesh sell toddy officially and this has helped the rural economy to a great extent,” said Sathiah. “In our neighbouring village, police demand Rs 12,000 to Rs 15,000 per week from men who tap toddy,” said Dhandapani. “They pay it as they make Rs 8,000 to Rs 10,000 per day.”

“We have not used palm to its full potential like in Cambodia, because we have focused on our industrial economy instead of rural economy,” said Narasimhan.

They made and sold products like seats for government bus drivers, floor washing brushes, walking stick, etc. When plastic made inroads, the training stopped. The unit now functions with three staff, in place of the 20 employees they originally had.

“Except the castor seed we add to the boiled sap, there are no additives,” Ganapthay told VillageSquare.in. “With the recent demand for organic food products, we are able to sell palm jaggery at Rs 340 per kg.”

“Perhaps, introducing jaggery in the government’s mid-day meal scheme to government school children could help revive the industry while providing nutrition to our children,” Murugesan. T (51), a climber with the state unit, told VillageSquare.in.

His co-worker Shanmugam suggested that the government should replace the white sugar in the state’s public distribution system with jaggery, so as to help palm climbers and thus boost rural economy.

Catherine Gilon is a journalist based at Chennai.

This article was originally published in VillageSquare.in.