Fur Seals Get By With a Little Help From Their Smells

Antarctic fur seals are so good at finding their own pups, they rarely nurse another’s young. 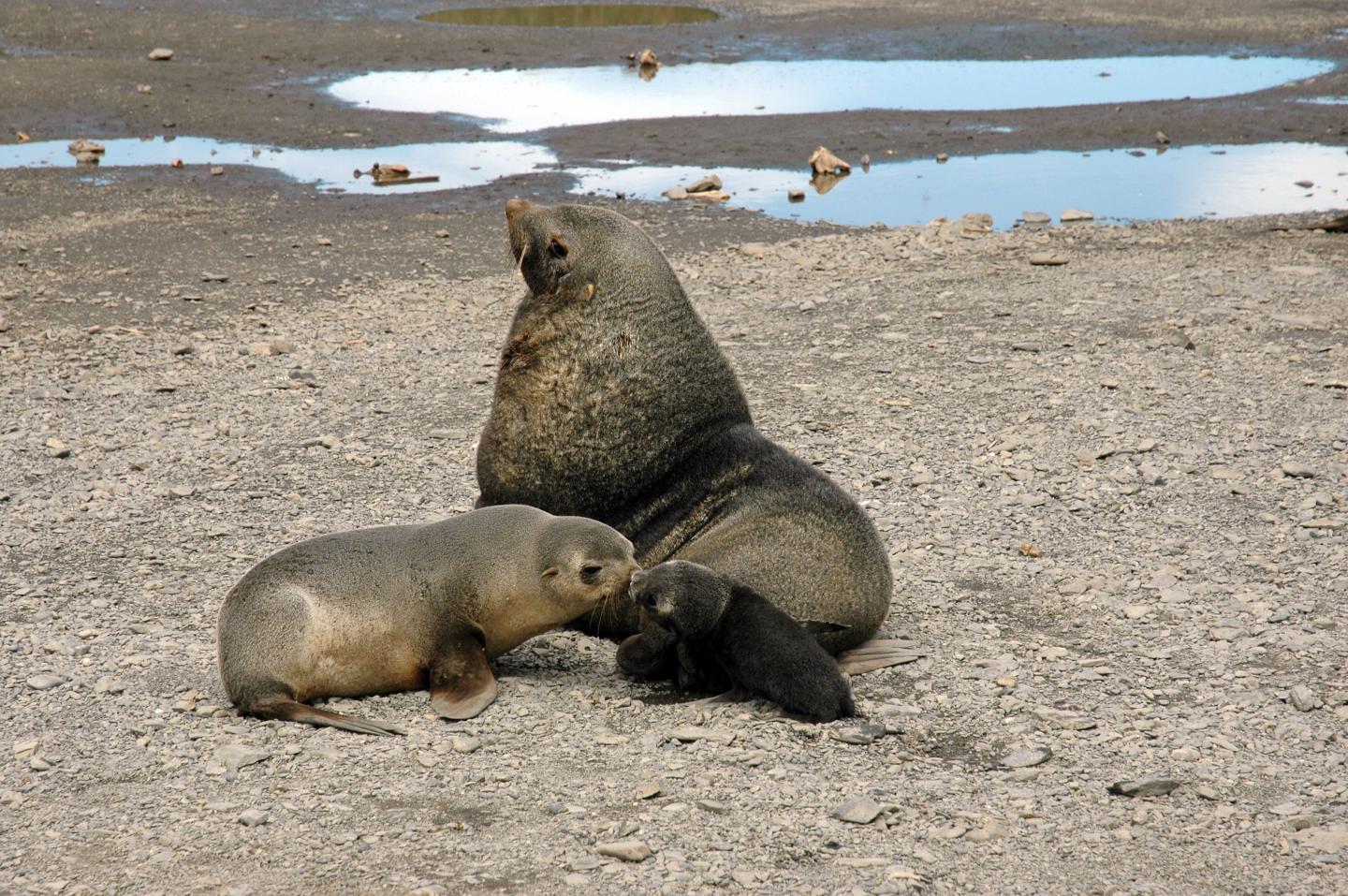 Animals do the most amazing things. Read about them here in this series by Janaki Lenin. Antarctic fur seals come ashore to breed on the beaches of South Georgia Island, about 1,400 km southeast of the Falklands. Every year, millions of adults heave on to land, the densest gathering of marine mammals in the world. Cows give birth to a single pup between mid-November and late December, and nurse it for approximately four months. During this time, the 40-kilogram mothers leave their black pups and dive into the sea to hunt tiny, shrimp-like krill. They may travel up to 240 kilometres and be gone for five to 10 days. Once they have eaten their fill and are heavy with milk, they waddle ashore. They look around the beach crowded with pups, nursing mothers, and bulls. How do they find their starving pup among the hundreds of thousands crying for their mothers on the beach?

Could they remember where they left the pup? Not likely. With their mothers gone, the youngsters get together and roam the beach, playing and jostling. Do they look for the cutest face? For many years, biologists thought mother seals found their pups by their squeaky calls. Researchers from Bielefeld University, Germany, and British Antarctic Survey now say smell plays the most important role in reuniting mothers with their pups.

The researchers sampled skin and fur from 41 mother fur seals and their pups from two different rookeries on Bird Island Research Station, adjacent to South Georgia Island. On analysing the skin secretions, they found that each animal has an average of 35 substances in a unique composition coating its body. Since some compounds found on mothers and their pups are genetically similar, the researchers think they may smell alike.

Finding such complex scent substances is remarkable in a marine species that spends most of its time at sea, filtering big gulps of water for krill and hunting fish by sight. The animals can’t sniff underwater, and they come ashore only for four to five months to breed. Yet, the sense of smell plays such a crucial role for these largely aquatic flap-footed mammals.

Other seals also have a good sense of smell. Steller sea lions have a large number of olfactory receptor genes since they are more terrestrial, and harbour seals can smell their way to the best foraging areas. The authors say they were partly motivated by a 2011 study of Australian sea lion cows. Researchers led by Benjamin Pitcher of Macquarie University, Australia, offered the animals stuffed toy models smeared with the smell of their own and unfamiliar pups. The mothers unerringly preferred the ones that smelt like their own. Since the toys were identical and mute, the only clue the cows had was smell.

Mother seals returning from a week long feeding trip must find their beach reeking of a multitude of body odours. Like a bloodhound, they zero in on their pups, and confirm their identities by sniffing noses.

Antarctic fur seals are so good at finding their own pups, they rarely nurse another’s young. Another study found that only 10% of 832 mothers adopted another pup. Comparatively, 90% of Hawaiian monk seals nurse young not their own.

Once they find their pups, fur seals nurse them for up to three days. Then they have to wrench themselves from their large, rapidly growing babies to go feed again. This cycle of feeding at sea and nursing on land, abandoning and finding pups, lasts four months.

Fur seals’ sense of smell isn’t only about finding pups and bonding with them. It has another equally critical role – it aids females find unrelated males to mate with.

During the 18th and 19th centuries, Antarctic fur seals were hunted almost to extinction. Only a small colony survived undetected on Bird Island. With protection, this colony grew and colonised neighbouring islands. Although there are millions of Antarctic fur seals now, they descended from a small stock. Inbreeding could be a major problem. And this is where smell could be the species’ saviour.

Like many other seal species, aggressive Antarctic fur seal bulls smell rank during the breeding season. Apparently cow seals have a body odour fetish. Since every animal’s signature scent is genetically coded, co-author Joe Hoffman says, “fur seals are able to recognise each other through odour and this in turn could help prevent inbreeding and preserve genetic diversity.”

“Individuals with high genetic variability have a more complex scent profile, meaning they have a greater number of substances on their skin,” adds Martin Stoffel, lead author of the study. “This could be significant when it comes to choosing a mate, because genetic diversity is often positively correlated with survival.”

Pitcher identifies another role for these scent substances, “By recognising the smell of other seals, they may be able form stable relationships in the colony between groups of related individuals. This may allow them to reduce the level of aggression between related animals.” He adds, “We now need to present these chemical cues to seals in behavioural experiments to determine if they can use them for recognition and which cues are important.”

Although biologists have long known animals can smell blood relatives, Barbara Caspers, another co-author, says, “but this has not been chemically proven until now.” Since sense of smell is the oldest and the most widespread among animals, she says, “There is reason to believe the mechanisms are similar across the animal kingdom and not just fur seals.”

While seals revel in each other’s body odours, we humans try to mask ourselves with artificial sprays, an industry estimated to be worth $40 billion by the year 2016.

The study was published in Proceedings of the National Academy of Sciences on August 10, 2015.