Forest Communities Pay the Price for Conservation in Madagascar

Local and indigenous communities are the key to forest conservation, but what cost do they pay for this burden? 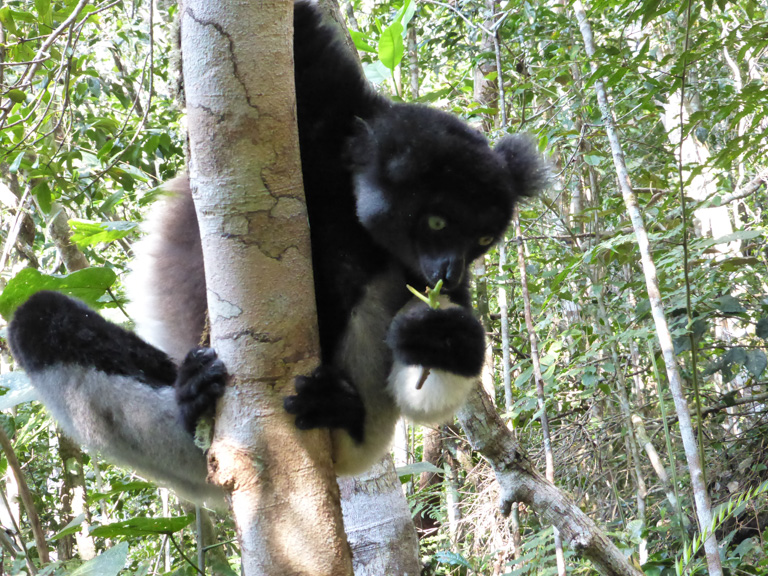 An indri, the largest lemur in Madagascar. Credit: Andriambolantsoa Rasolohery.

Local and indigenous communities seem to hold the key to protecting both forests and the massive amounts of carbon that they contain — and on which we all depend. But along with that responsibility can come outsize burdens on these communities, a recent study of a development initiative tied to a large conservation project in Madagascar has found.

“Conservation might have benefits that are important to many people, but there are private costs,” said Julia Patricia Gordon Jones, a conservation scientist at Bangor University in Wales and the lead author of the study. “These costs are also felt by some of the poorest people in the world.”

Jones and her team focused on the Ankeniheny-Zahamena Corridor. The CAZ, its French acronym, holds 3,820 square kilometers (1,475 square miles) of stitched-together protected areas in eastern Madagascar. This block of rainforest teems with life: It’s home to at least 15 lemur species, dozens of bird, reptile and amphibian species, and thousands of plant species, 85% of which are found nowhere else on Earth. It’s also surrounded by communities that depend on the forest for food, water and building materials, and nine out of ten rely on slash-and-burn agriculture.

The conservation community often thinks of such livelihood projects, in concert with the protection of threatened biomes like the CAZ, as win-wins: Standing forests, along with the carbon, biodiversity and other ecosystem services they support, stay standing. Meanwhile, local people can support their families in ways that don’t require cutting down the forests.

“We all feel nice about this,” Jones said.

These projects are part of the global REDD+ strategy, short for reducing emissions from deforestation and forest degradation. The plan involves selling credits based on the carbon that remains protected in the forests, instead of being emitted as a result of deforestation, and those profits are then intended to be injected into affected communities. It’s an approach that’s garnered a lot of support on the international stage, so much so that the 2015 Paris climate accord codified its potential role in facing down climate change.

But, Jones said, it’s important to ask whether the benefits to local communities really offset the hardships that a conservation project, such as the establishment of a park like the CAZ, cause. That’s the question she and her colleagues wanted to answer in an in-depth, two-year study of the of the REDD+ project for affected communities.

They spent a considerable part of that time in the communities around the CAZ to understand who was selected for compensation under the REDD+ pilot project and the value of the recompense they received. In that process, the researchers spoke with more than 450 households around the CAZ to understand what the creation of the protected area meant to these families. They found that the benefits from the project often fell short of what people needed to make such a disruptive shift in the way they lived and how they provided for their families. Also, the benefits reached less than half of those negatively affected by the establishment of the park, the research showed.

The team published its research in the journal PeerJ on July 5.

“We need really to think about how we would compensate people, because otherwise these people will suffer from conservation projects,” Rina Mandimbiniaina, a geographer at the University of Antananarivo in Madagascar and a co-author of the study, said in an interview. “Poor people here in Madagascar, especially along the forest, they don’t really have any alternatives for their household revenues.”

In this study, the researchers looked at the opportunity costs of this conservation project: that is, what families were giving up by agreeing to no longer use the forest.

“We need to recognise that conservation affects people’s access to natural resources by denying them the opportunity to use certain areas (as in protected areas),” Sarobidy Rakotonarivo, an environmental economist at Scotland’s University of Stirling and co-author of the study, said in an email.

The team calculated that the mid-range, or median, value of the opportunity costs to households amounted to $2,375 over the next 60 years, but this figure varied considerably based on, for example, a household’s distance from the CAZ boundary. The cost each year, ranging from $40 to $125 in the median-income households, represented between 27 and 84% of the households’ yearly incomes. In general, the proportion was higher for poorer families.

The REDD+ project ended up providing between $100 and $170 in assistance to each household. However, when the researchers asked how much this support was worth, the recipients pegged it at about $80. What’s more, it was a one-time investment. In other words, while families had to continue to find ways to support themselves without the forest year after year, that support only came once. To expect this amount of compensation to be enough isn’t realistic, according to Rakotonarivo.

The team also found that the project didn’t reach far enough. Of the 2,500 households that were identified as having been negatively impacted by the establishment of the CAZ by a 2012 World Bank study, more than 40% hadn’t received any compensation as of late 2015, and more than half of the families that were negatively affected were identified to receive compensation at all. According to the findings of a 2016 study by Jones and her colleagues examining the same project, the households that weren’t identified were often poorer, had less political power and lived in farther-flung areas.

“It’s like the protected area is only for the people who manage it,” said co-author and agricultural engineer Alexandra Rasoamanana, from the University of Antananarivo. “It’s not integrated into all of the decisions inside of the region.”

A World Bank spokesperson said that it had overhauled its process to be more inclusive.

“Since the closing of the Madagascar projects covered in the paper, the Bank has supported the government in the establishment of a landscape approach to conservation,” the spokesperson said in a written statement. “Through these efforts, conservation is seen as part of broader development interventions aimed at increasing productivity of agriculture and agro-forestry, and hence livelihoods, through area planning, targeted investments, and improved local governance.”

And there’s little reason to doubt that similar issues with compensation would arise in other parts of the world, often as a result of the same causes, the researchers said.

“That would happen in many countries in Africa, because we have this complexity of land tenure and forest conservation, and also we are dealing with [limited] funds to support conservation activities,” Rina Mandimbiniaina said.

Tokihenintsoa Andrianjohaninarivo is a researcher with Conservation International in Madagascar who was involved in the CAZ REDD+ project, but not in the PeerJ study. In an email, she said this research would be “helpful” in designing similar projects in the future.

But she added, “We would say that ‘compensation hasn’t fully worked,’ instead of ‘it hasn’t worked at all.’”

Still, Andrianjohaninarivo said that she and her colleagues agreed that a one-time payment to households couldn’t make up for the long-term costs they bore. Knowing the real costs of such a project, society must determine how much it is willing to pay, she said, leading to important questions for future research.

“Are we ready to make an everlasting payment to these affected people?” she asked. “Should it be one-time investment or a revolving fund?”

Jones and her colleagues calculated that the carbon locked away in the CAZ’s trees for ten years could be worth $110 million. According to a World Bank document, Microsoft alone purchased $400,000 in carbon credits in 2014. But the total amount spent on the affected households in this REDD+ project amounted to between $250,000 and $425,000. 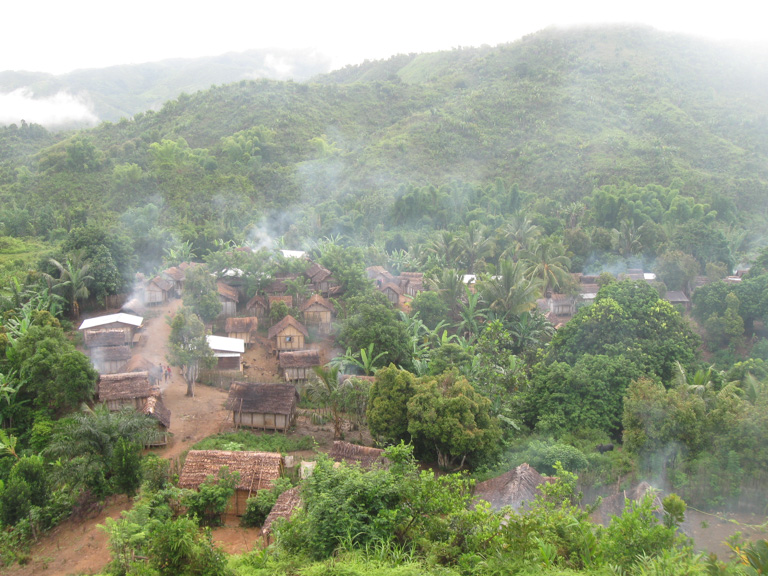 Tens of thousands of people live in small villages and isolated hamlets on the periphery of the new CAZ protected area. Credit: Mahesh Poudyal.

She said that finding ways to stem deforestation could be deceptively complicated, often because the impacts on the lives of those affected most weren’t adequately considered.

“Reducing deforestation in the tropics has to be part of our global strategy to tackling climate emissions,” Jones said.

“I think there is a tendency for society to think it’s a very cheap way of doing it,” she added. “That’s because the people bearing the costs are poor and marginalised rather than you and me having to fly a bit less.”

John Cannon is a Mongabay staff writer based in the Middle East. Find him on Twitter: @johnccannon

This article originally appeared on Mongabay. You can read the original article here.