The affidavit turns its back on important submissions and deliberations in 2019, and paints an oversimplified picture twisted in favour of hydropower development. 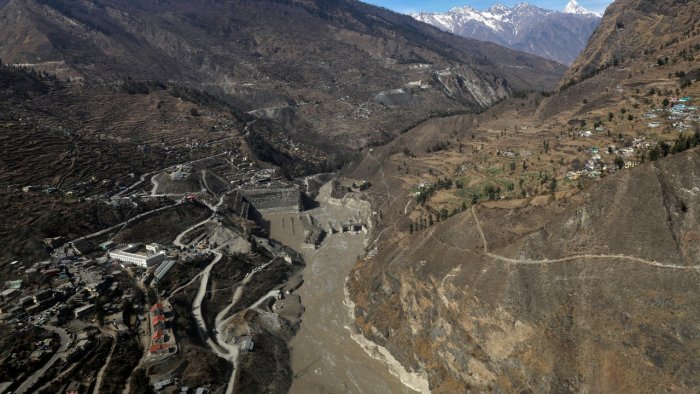 A view of Tapovan. Photo: Reuters

The unprecedented floods that ravaged much of Uttarakhand in 2013 and killed over 4,000 people in the Kedarnath Valley alone brought into focus the adverse impacts of the rampant construction of hydropower projects in the Himalayan state.

In response, backed by scientific studies and driven by “pain, anguish and outrage”, a “concerned” Ministry of Environment, Forest and Climate Change (MoEFCC) filed an affidavit in the Supreme Court on December 5, 2014, stating: “any decision on developmental projects especially hydropower projects should … be on very strong and sound footings with scientific back up”.

Yet, in a drastic change of stance from 2014, the MoEFCC filed an affidavit in the Supreme Court on August 17, 2021, saying a consensus had been reached between the MoEFCC, the power ministry, the Jal Shakti ministry and the Uttarakhand government to continue work on seven hydropower projects:

According to state data (valid at least until 2016), the Uttarakhand government had planned more than 450 hydropower projects, with a total installed capacity of 27,039 MW. At the time, 92 projects with 3,624 MW of installed capacity had been commissioned and 38, with 3,292 MW, were under construction.

But the government’s plans were stalled after the Supreme Court intervened following the 2013 floods. The court is still hearing the matter, and its verdict, whenever it is pronounced, will decide the future of hydropower projects in Uttarakhand.

The MoEFCC filed its recent affidavit vis-à-vis the same case. And it is important because the ministry has claimed that this affidavit consolidates all its past presentations in the same matter.

The Wire Science has reviewed the Supreme Court orders, affidavits, counter-affidavits and the reports of several committees filed in relation to the case. The conclusion is clear: in its new affidavit, the MoEFCC has misrepresented facts to push for the seven projects, and has left out information that may call into question the ministry’s decision.

Seven projects may pave the way

In August 2013, the Supreme Court directed the MoEFCC to form an expert body to assess whether hydropower projects had aggravated the 2013 Uttarakhand floods.

The ministry formed an 11-member body – called EB-I, chaired by Ravi Chopra – in October 2013. This committee’s report stated that hydropower projects had indeed aggravated the impact of the 2013 floods. However, two dissenting EB-I members – one each from the Central Water Commission and the Central Electricity Authority – also submitted a separate report supporting the construction of hydropower projects.

After reviewing both reports, the MoEFCC endorsed the majority report. The ministry’s December 5, 2014, affidavit states: “it is pertinent to conclude that there has been a direct and an indirect impact of the [hydroelectric projects] in the aggravation of the flood of 2013”.

But MoEFCC’s new affidavit makes no mention of the 2014 affidavit.

Also in December 2014, the MoEFCC formed a second committee – with four members and chaired by Vinod Tare – to study the viability of six hydropower projects:

These were among the 23 projects that the Chopra committee had suggested dropping.

In its February 2015 report, the Tare committee wrote that considering the negative impact the projects would have on Uttarakhand’s ecology and biodiversity, they “may not be taken up”.

In its May 2016 affidavit, the Jal Shakti ministry (then the Ministry of Water Resources, River Development and Ganga Rejuvenation) submitted an affidavit supporting the Tare committee’s stance.

But despite two committee reports recommending dropping the six projects, in June 2015, the MoEFCC formed a third committee – with 11 members and chaired by B.P. Das, a.k.a. EB-II. Its principal mandates were to suggest design modifications for the six projects, to conduct a cumulative impact assessment, and to assess the carrying capacity of the upper reaches of the Ganga river vis-à-vis hydropower projects.

The EB-II, however, stepped beyond its mandate, reviewed 70 hydropower projects, and suggested going ahead with 26 under-construction and proposed projects.

The seven projects the MoEFCC has proposed to implement in its new affidavit are among these 26.

Now, deliberations on February 25, 2019, in the chamber of the principal secretary to Prime Minister Narendra Modi, superseded the EB-II report. At this meeting, the government decided that no new or proposed projects would be considered on the Ganga and its tributaries in Uttarakhand. It also determined that only the seven projects assessed to be “more than 50% complete” could proceed.

A January 2019 submission by the Jal Shakti ministry, to the MoEFCC, also only supported the implementation of the seven projects considering the substantial sunk costs. The submission also stated, unequivocally, that the ministry was “not in favour of construction of any other hydro-electric project in the Ganga basin”.

But the new MoEFCC affidavit simply forgets the January 2019 submission and the high-level February 2019 meeting, and states that the seven projects “also form part of the 26 projects recommended by EB-II for implementation”. Even the deliberations in the prime minister’s office find no mention in the text.

“The MoEFCC mentioning that these projects form part of the 26 projects goes to show that if these seven projects are approved for implementation, they will also pave the way for the implementation of the remaining 19 projects,” environmentalist Hemant Dhyani, who was a member of the Chopra committee, said.

Ravi Chopra, who chaired EB-I, said, “From the affidavit, it appears that the ministry has been very keen to push through these projects, even if it means misrepresenting facts and hiding the truth.”

The Wire Science emailed the MoEFCC secretary R.P. Gupta for the ministry’s response on Chopra’s characterisation of the affidavit, and its ‘forgetful’ nature. This article will be updated as and when Gupta responds.

Of the seven projects that the MoEFCC has proposed for construction, five have been damaged in previous flood-related disasters. The 2013 floods damaged Phata Byung, Singoli Bhatwari, Madhmaheshwar and Kaliganga-II – all in Rudraprayag district. Tapovan Vishnugad, in Chamoli district, was damaged in disasters in 2012, 2013, 2016 and 2021.

The Chopra committee report said that while these projects were damaged by the 2013 flood, they also made its impact worse.

The MoEFCC is arguing that the seven projects should go ahead because work on them is more than ‘50%’ complete. But environmentalists are not convinced. The NTPC’s Tapovan Vishnugad project is a case in point.

On February 7 this year, a flooded Dhauliganga river damaged much of the Tapovan Vishnugad project, which was under construction. At least 139 workers were killed at the project site. The MoEFCC affidavit says that the project was ‘75% complete’ before the deluge and that a post-disaster assessment is still pending.

“Without the post-disaster assessment, how has the MoEFCC assumed that the project currently stands at least at 50 percent completion?” Dhyani asked.

In addition, while the narrative in the new affidavit suggests that work has been stalled on the seven projects since 2013, the concerned developers have in fact been continuing work on most of them. This raises troubling questions over environmental clearances for disaster-hit power infrastructure.

“The projects damaged in disasters must apply for fresh environmental clearances since the basis on which clearances were obtained change after the disasters,” said Atul Sati, a CPI-ML leader from Joshimath town, Chamoli district, who is one of the petitioners in a case in the Supreme Court against the Tapovan Vishnugad project.

“No work should begin on the Tapovan Vishnugad project before fresh clearances are obtained.”

Dhyani also said the MoEFCC affidavit paints an oversimplified picture twisted in favour of hydropower development. As a result, he added, it commits a “grave injustice” against the people battling hydropower companies as well as facing the consequences of rock-blasting and tunnel-digging where they live.

The Vishnugad Pipalkoti project in Chamoli – one of the seven – provides an illustration. Within a month of the MoEFCC filing the affidavit, the pace of work on the project picked up. Around 6 am on September 22, sans prior notice, at least 16 buildings were demolished in Chamoli’s Haat village.

According to Haat’s gram pradhan (village head) Rajendra Hatwal, people from the developer company, THDC India Ltd., also forced the occupants of around nine houses out of the village as the company claimed their land. 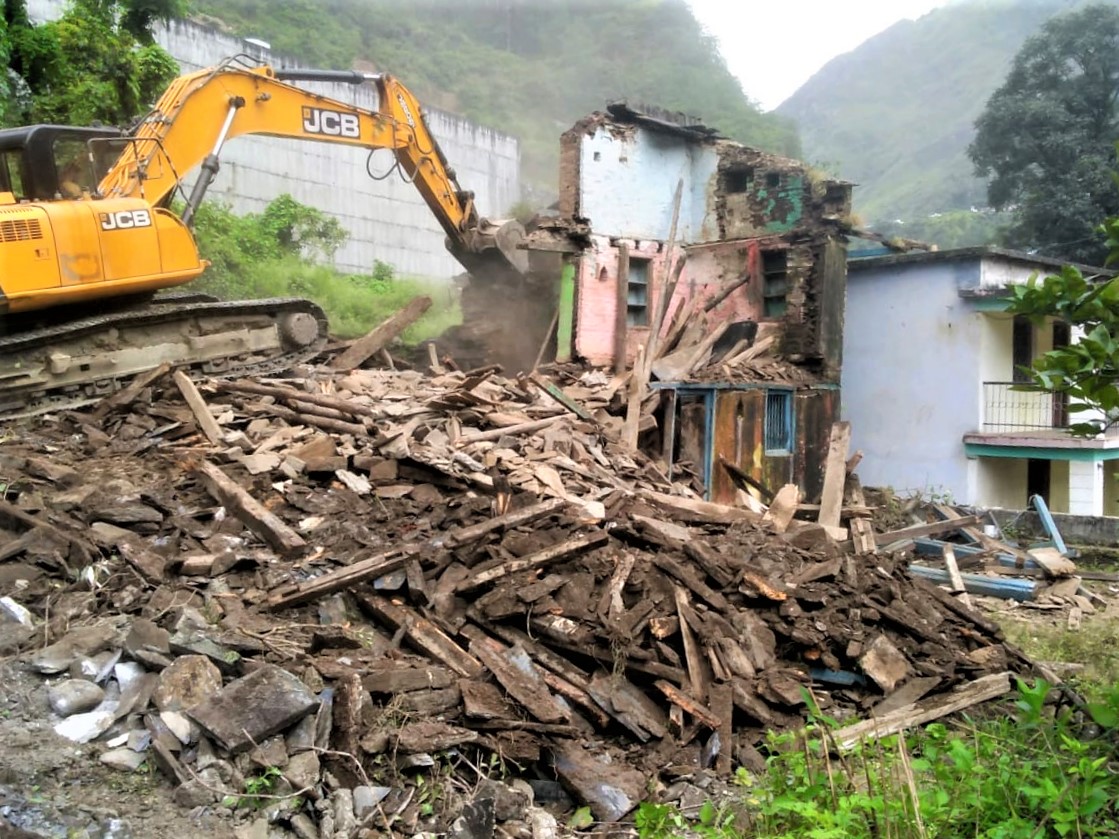 Even as climate change is emerging as a cause for concern in the Uttarakhand Himalaya, it finds no mention in the MoEFCC’s recent affidavit.

The UN Intergovernmental Panel on Climate Change released an important climate report on August 7 this year. It warns of Himalayan glaciers losing mass due to global warming and of an increase in “heavy precipitation” events that may trigger more landslides and floods in the region.

“Despite the warnings issued by the scientific community, the authorities are either unwilling or unable to recognise that we are in the midst of a severe climate change phenomenon,” Ravi Chopra said.

His committee’s report also cautioned against hydropower projects in unstable paraglacial zones, particularly at altitudes of 2,200-2,500 m. But the projects the MoEFCC is pushing for, with the sole exception of Tehri II, lie either within or in the neighbourhood of paraglacial zones.

Worse yet, the seven projects also lie in seismic zones IV and V – i.e. ‘severe’ and ‘very severe’ intensity zones, respectively. Yet the MoEFCC affidavit leaves the issue of seismicity and its probable impacts on hydropower projects unaddressed.

Kavita Upadhyay is a journalist and researcher from Uttarakhand. She writes on environmental issues in the Indian Himalayan region. She’s a graduate in Water Science, Policy and Management from the University of Oxford. She tweets at @Upadhyay_Cavita.