Is Climate Change Making Floods an Annual Affair in Kerala?

Kerala, which boasted steady monsoons and salubrious climate, is now grappling with deluge, in a repeat of the devastating August 2018 floods. 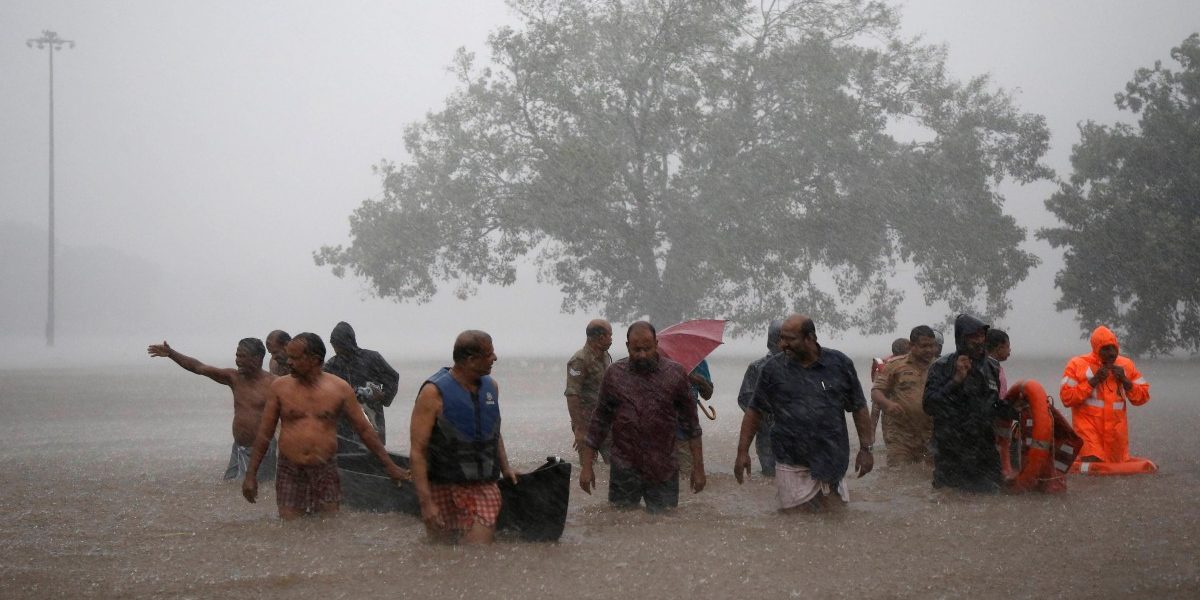 Members of a rescue team wade through a water-logged area during heavy rains on the outskirts of Kochi in Kerala, August 8, 2019. Photo: Reuters/Sivaram V

In Kerala, it looks like climate-change-induced floods are becoming an annual affair. Following heavy rains over the last one week, the state which once boasted consistent rains during the monsoon season is now grappling with devastating floods in the month of August. It was so in 2018, and it is not any different this year too. It continued to pour till Sunday (August 11) evening, and then in isolated showers with decreasing intensity.

The death toll has gone up to a frightening 92, and 58 others are reported missing — feared trapped under mud and debris — at Kavalappara in Malappuram district and Puthumala in Wayanad district, where massive landslides have wiped out hundreds of houses, places of worship and other buildings. As many as 250,638 people are displaced due to the rains with many living in 1326 relief camps, while alert was sounded in 13 of the state’s 14 districts.

Rivers are overflowing and many low-lying areas have been inundated. In most parts of the state, heavy rains and road blockades are hampering rescue operations; and in many regions in the northern districts of Wayanad, Palakkad, Malappuram and Kannur, vehicles and buildings remain half buried in flood waters.

Like in the previous year, in the initial days of the southwest monsoon in Kerala, rainfall was scanty, and it remained so till nearly the end of July, raising disturbing questions about the availability of water for domestic and agricultural purposes. There were reports from various regions of the state about shortage of potable water and it being supplied through tanker lorries.

It however, began to pour as the first anniversary of the devastating floods of 2018, which had physically subdued God’s Own Country, approached. Unabated rains are now bursting the banks of the major rivers in the state, forcing authorities to open the shutters of some of the big dams such as Banasura Sagar in Wayanad.

Sekhar Kuriakose, member secretary, Kerala State Disaster Management Authority said that the floods of 2018 were of an unprecedented nature and what is now happening is a repetition. The mood, character and form of rains have changed in the last two years, he said. Across the state, landslides are happening one after another, causing death and destruction in their wake. 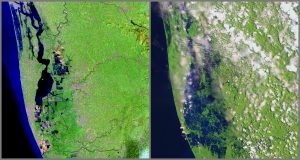 Kerala before (left) and right after (right) the 2018 floods, as captured by Landsat 8. Photo: NASA

According to Kerala chief minister Pinarayi Vijayan, eight districts in the state witnessed 80 landslides between Friday and Sunday. Most of the deaths were caused by landslides and in most places they wiped away large portions of hill areas. Landslides even affected the Cholanaika tribe who live in the deep interiors of Nilambur forests in Malappuram district.

The situation in the state once again pointed to the absence of a scientific flood and disaster management system. The official measures taken since the deluge last August have obviously failed to prevent the loss of human lives and livelihood. The state also has the dubious legacy of promoting encroachments of water bodies, rivers, forests and ecologically fragile lands. Though the government has been vocal about the construction of flood-resilient buildings for quite some time now, over 3,000 houses have already been damaged in the floods this year.

“The monsoon over Kerala has completely lost its traditional character,” said Gopakumar Cholayil, consultant climatologist and research officer at the Academy of Climate Change Education and Research, Kerala Agriculture University.

“A meteorological unpredictability is looming large over the entire south India and it is more visible in Kerala and environmental hotspots such as the Nilgiris and Kodagu. Global warming is the main culprit, and in all likelihood, the floods will be followed by a severe drought,” said Cholayil, who has been researching on the changing rain patterns of the region for the last 20 years. Topographical changes induced by adverse changes in land use patterns are a contributing factor, he adds.

S. Faizi, a member of the Biodiversity Convention’s Expert Group on Poverty and Biodiversity and president of the Ethological Society of India said that the problem with Kerala society is its refusal to accept the reality.

“There is a wide segment of experts and opinion makers who believe deforestation and change in land use patterns are the reasons for the devastating floods, which are now becoming an annual affair. They cite ecologist Madhav Gadgil’s studies on Western Ghats to validate their point. In my opinion, these are just contributing factors. Those people who focus too much on the contributing factors are ignoring the real villain. We lack climate literacy and there is an urgent need to study the impact of global warming and climate change on Kerala,” he said.

Venu G. Nair, a meteorologist at Centre for Earth Research and Environment Management said that experts have been predicting the possible shift in the character of the monsoon since the 1960s. However, alarming changes have started occurring only in the last couple of years. Still, nobody expected a sequel to the Kerala floods of 2018.

“After the floods last year that affected all the districts of Kerala except Kasaragod, the state government and its research agencies had asserted that there would not be a repeat of the disaster in our lifetime. They termed it as a once-in-a-century phenomenon.  Nobody raised the issue of climate change in the debates that followed the deluge last year,” recalled N. Badusha of Wayanad Environmental Protection Organisation.

In the previous year, there were allegations of the meteorological department not informing the state government in advance about the volume of rainfall. It has been claimed that it was because of this that the government had delayed the opening of the shutters of different dams in the state. This time, most of the dams remain half empty even as flash floods are causing landslips in areas far away from dams and rivers.

The enormous amount of damages that have occurred in Wayanad, Nilambur, Attappady, Nelliyampathy and Idukki are pointers to the fact that the highly sensitive Western Ghats region is facing the brunt of global climatic change. This area is now facing long spells of both droughts and floods.

“The monsoon calendar has changed. Rains played hide and seek in June and July, the normal monsoon months. But the quantum of rain that lashed Kerala in three days of the first week of August, was equal to what the state had received during more than a month in the past,” said Cholayil. 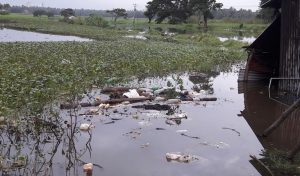 Garbage thrown into the waterways in Kerala return with the floods. Photo: Mongabay/ S. Gopikrishna Warrier

“I too have been involved in the various agitations that took place in the recent past demanding protection to Kerala’s forests, hills and wetlands. There is a need to maintain them for the future generations. But there is a large number of so-called experts and opinion makers who are part of the climate change denial lobby which is very powerful,” Faizi said.

“Several climate experts had predicted that floods would recur in a five-year interval instead of the historical 100 years. But in Kerala, it is occurring for the second consecutive year.  Those who try to shift attention from the devastation caused by global warming and its causative agents by blaming imagined forest loss seem to be pushing a corporate agenda. When the rains that you normally get in two months of monsoon pour down in one or two days what occurs is flood, deluge — the extreme climatic events,” he added.

According to Kusala Rajendran, professor at the Centre for Earth Sciences at Indian Institute of Science in Bangalore, the changes in land use patterns in Kerala have made the after effects of climate change more complex. The changes in agricultural patterns, land use and the ongoing building construction spree need to be studied authentically, she said.

“Climate change is a reality and it must be taken seriously. Kerala is in fact facing the combined after effects of climate change, population pressure and unscientific land utilisation, she added.

Experts are suggesting the need for large scale planning and research to minimise flood-related damages in the future. Policy level changes are required for management and distribution of resources. On its part, the government has already started issuing stop memos to granite quarries in the environmentally fragile zones and denying permission for buildings in vulnerable regions.