The flood has further taken the lives of 86 wild animals in national parks and 31,48,133 domestic animals and poultry across the state. 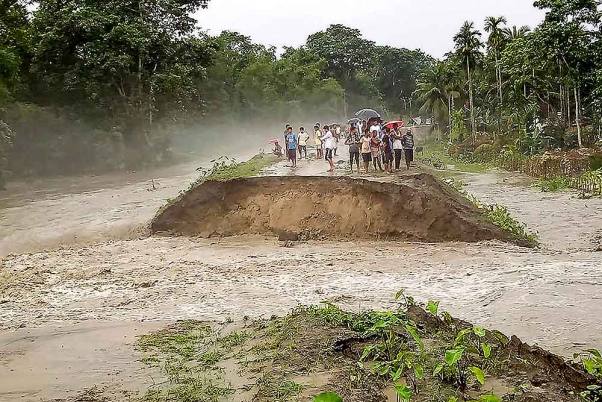 People stand near an embankment after it was washed away by floodwater during heavy rainfall, at Pathsala in Barpeta district. Photo: PTI

Guwahati: Five more people died in flood-related incidents in Assam and 35.76 lakh people across 28 of the 33 districts in the state are now affected, an official bulletin said on Friday.

One person each died in Dhubri, Darrang, Bongaigaon, Goalpara and Kamrup districts, the Assam State Disaster Management Authority (ASDMA) said in its bulletin.

Though the number of districts affected by the deluge increased by one since Thursday, that of the flood victims decreased by around 4 lakh.

The total number of people losing their lives in this year’s flood and landslides in the state has gone up to 102. While 76 people died in flood-related incidents, 26 were killed in landslides, the bulletin said.

Dhubri is the worst-hit district with over 8.92 lakh people affected, followed by 4.43 lakh in Goalpara and 4.30 lakh in Barpeta, it said.

Personnel of the State Disaster Response Force and district administrations and local people have rescued 2,389 people during the last 24 hours.

At present, 3,014 villages are underwater and 1,27,955.33 hectares of crop areas have been affected across Assam, the ASDMA said.

It said that the authorities are running 711 relief camps and distribution centres across 24 districts, where 51,421 people have taken shelter.

Its tributaries Dhansiri, Jia Bharali, Kopili, Beki and Kushiyara are also flowing above the danger level at various places, the bulletin said.

The deluge has so far taken away the lives of 86 animals of different species in Kaziranga National Park and Rajiv Gandhi Orang National Park. A one-horned rhinoceros along with her baby stands in floodwater inside Kaziranga National Park, in Golaghat district. Photo: PTI

The flood has also affected 31,48,133 domestic animals and poultry across the state during the last 24 hours.

“I am writing to you today to express my sadness at the loss of life and devastation of property, as well as the tremendous hardship caused to so many due to flooding in many parts of your state…”

“As a gesture of solidarity with the people of Assam, I am making a donation from the Dalai Lama Trust towards relief and rescue efforts,” the letter read.

However, the amount of donation was not mentioned in the tweet posted by the Tibetan guru’s office.

Sonowal expressed gratitude to the Dalai lama for standing by the flood-hit people of the state.