The death toll in this year's floods in the state has gone up to 16. 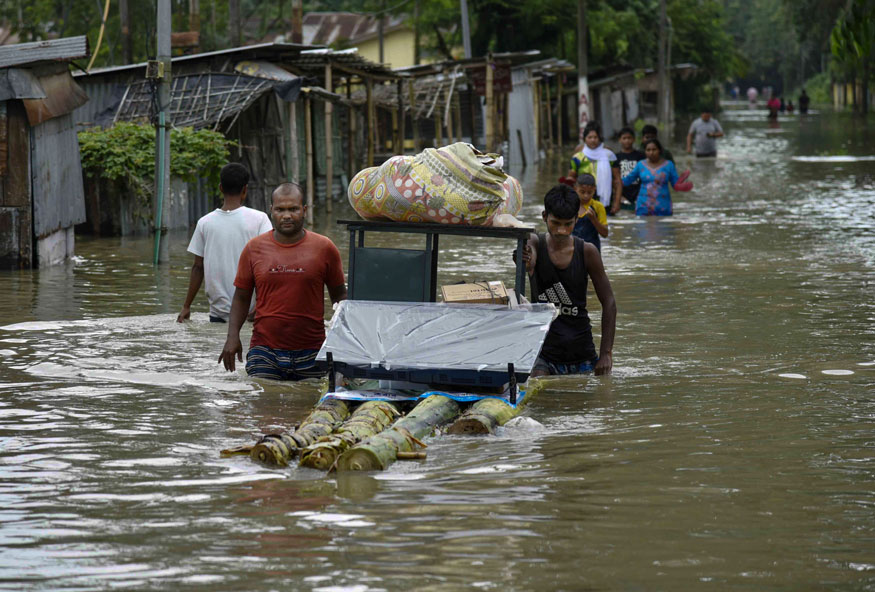 People carry their belongings on a makeshift raft as they wade through the flood waters, following heavy monsoon rain, in Barpeta district of Assam. PTI

Guwahati: The flood situation in Assam worsened on Saturday with two more people losing their lives due to the deluge, which has affected over 4.6 lakh people across 21 districts, officials said.

The two deaths were reported at Balijana and Matia in Goalpara district due to flood waters, the Assam State Disaster Management Authority (ASDMA) said in its daily bulletin.

The death toll in this year’s floods in the state has gone up to 16.

Dhemaji is the worst affected, followed by Tinsukia and Nalbari.

The administration has rescued 261 people during the last 24 hours in the three districts, the bulletin said.

With incessant rains, Dibrugarh city has been under water for the last four days, the ASDMA said, adding that 1,289 villages are submerged and 37,313.46 hectares of crop area has been damaged.

Authorities have set up 132 relief camps and distribution centres in 10 districts where 19,496 people are taking shelter.

The Brahmaputra is flowing above the danger mark at Guwahati, Nimatighat in Jorhat, Tezpur in Sonitpur, Goalpara town and Dhubri town.

Embankments, roads, bridges, culverts and other infrastructure have been damaged at various places, the bulletin said.

Massive erosion has been witnessed in Baksa and Udalguri, the ASDMA said.

The bulletin also said that 80 out of 183 camps are affected due to the flood at the Kaziranga National Park.