The situation is no better in Meghalaya, where at least 18 people have died in the last two days, and Arunachal Pradesh, where roads have been damaged due to landslides and villages are largely flooded. 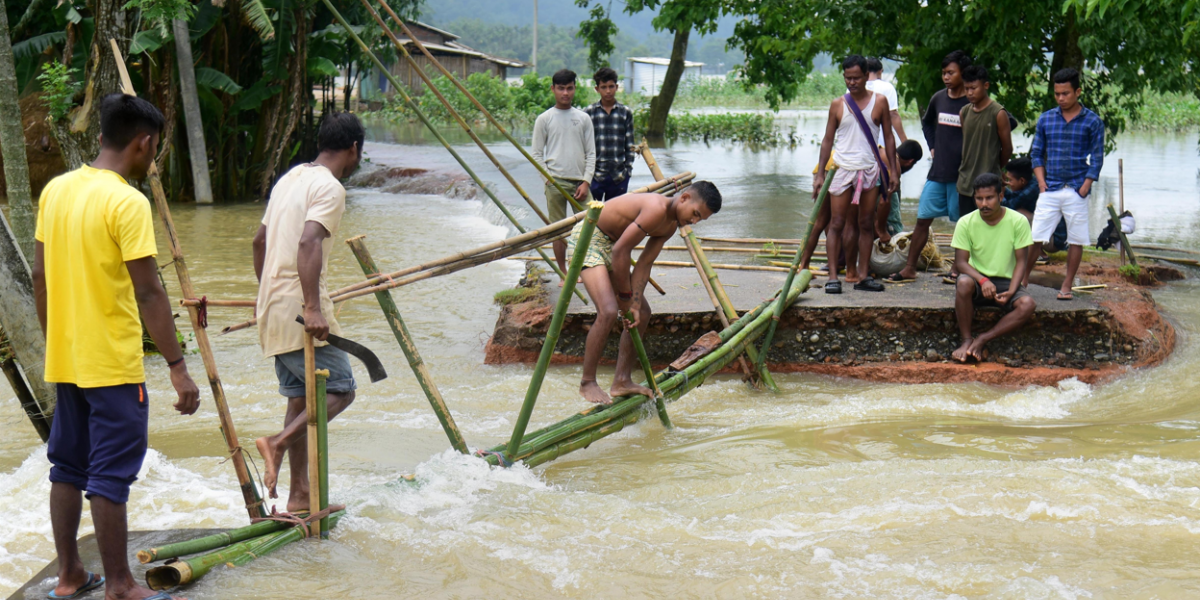 Goalpara: Villagers make a temporary bamboo bridge after a portion of a road was washed away by the flood water at a village in Goalpara district of Assam state, Saturday, June 18 2022. Photo: PTI

New Delhi: The flood situation in the northeast took a turn for the worse on Friday, June 17 as incessant rainfall pounded parts of the region for the fourth consecutive day, leaving its major rivers in spate, officials said.

Nine more people, including two children, died in rain-related incidents in Assam, raising the toll in this year’s floods and landslides to 55, a bulletin by the state’s disaster management authority said. As many as 19 lakh people remained affected by the deluge in 28 districts of the state.

The deaths were reported from Hojai, Nalbari, Bajali, Dhubri, Kamrup, Kokrajhar, and Sonitpur districts. The landslides were reported in Dima Hasao, Goalpara, Hojai, Kamrup and Kamrup (Metropolitan) and Morigaon.

On Friday night, a boat carrying flood-affected people capsized in Hojai district, leaving three children missing while 21 others have been rescued.

A group of 24 villagers were moving to safety from inundated Islampur village late on Friday night when the boat hit submerged a brick kiln and capsized in Raikota area.

Meanwhile, a bulletin issued by the Central Water Commission (CWC) on June 18, Saturday said that Kopili River is flowing above “high flood level” at Kampur in Nagaon district.

Other rivers including Brahmaputra, Jia-Bharali, Puthimari, Manas, Beki, Barak and Kushiara were flowing above the danger level, the bulletin said.

A total of 2,930 villages have been affected by the floods, with 43,338 hectares of cropland under water and 410 animals getting washed away.

At least 234 roads and 16 bridges have been damaged in the rain, officials said.

Prime Minister Narendra Modi on Saturday, June 18 called up chief minister Himanta Biswa Sarma and inquired about the flood situation, while also assuring the chief minister of all possible help from the Centre.

“Earlier today, spoke to Assam CM and took stock of the situation due to floods in the state. Assured all possible support from the Centre. I pray for the safety and well-being of the people of Assam affected by flooding,” Modi wrote on Twitter.

Sarma, replying to the prime minister’s tweet, thanked him.

“Very kind of you to have called to take an update on the relief and rehabilitation work in flood affected areas of Assam. We are closely monitoring the situation and providing best help to people,” he tweeted.

Earlier today, spoke to Assam CM Shri @himantabiswa and took stock of the situation due to floods in the State. Assured all possible support from the Centre. I pray for the safety and well-being of the people of Assam affected by flooding.

Also read: The Water Wars Myth: When Water Runs Short, Do We Have to Fight?

The situation is no better in Meghalaya and Arunachal Pradesh, where roads have been damaged due to landslides and villages are largely flooded.

According to the India Meteorological Department (IMD) officials, Mawsynram and Sohra in Meghalaya’s East Khasi Hills district are in a competition to be the wettest place in the country recording record rainfall in the last 24 hours ending 8:30 am on June 17.

While Sohra (erstwhile Cherrapunji) in Meghalaya recorded a massive 972 mm of rainfall on June 17, Mawsynram received 1003.6 mm showers during the same period.

At least 18 people have died over the past two days in Meghalaya in flash floods and landslides, officials stated.

In neighbouring Arunachal Pradesh, water from river Subansiri has submerged the under-construction dam site of a hydroelectric power project. Workers employed at the dam site have been asked to move to safety by authorities of National Hydro Power Corporation, which is developing the project, official sources told PTI.

Torrential rain in the frontier state has inundated numerous villages of the two districts of Dhemaji and Lakhimpur, a government official told the news agency.

More than 2,000 people have been displaced due to flooding in Sadar subdivision of West Tripura district triggered by torrential rain, officials said on Saturday, June 18.

They have taken shelter in 20 relief camps. However, no fatality has been reported so far, they said.

West Tripura district has received 155 mm of rainfall in the last 24 hours, causing inundation of several low-lying areas on the banks of Howrah River.