From collapsed houses to rotting belongings and disorganised relief centres, the residents of Kolhapur have a long uphill battle before them.

Prayag Chikhali village, in Panhala Taluka, was one of the worst affected villages in Kolhapur. This village was cut off for over a week and the NDRF team had to be brought in to save lives in the village. Photo: Sukanya Shantha

Kolhapur: A strong stench lingers in the air of Siddharth Nagar colony. The settlement, in the heart of Kolhapur city centre, housing over 5,000 families, was virtually under water for over a week.

From August 3 onwards, the city has been battered by what has been branded the decade’s worst monsoon.

A week later, when the flood waters began to recede, the scale of the disaster began to become clearer. Hundreds of houses lie flattened and several more have been rendered unliveable.

Twenty-five-year-old Vishaka Kamble, a young mother of two, returned home after two weeks of taking shelter at a makeshift camp arranged at a community centre nearby. Her joint family of 13 had lived in three adjacent houses for over three decades.

The three houses, in one of the largest Buddhist colonies in Kolhapur city, have been reduced to concrete rubbles. What remains is a few half-broken pillars and bent iron mesh.

Vishaka Kamble’s house in Siddharth Nagar slums was among the first to be destroyed in the flood. Her family has since been living at a relief camp at a nearby community centre. Photo: Sukanya Shantha

Recalling the conditions under which her family left home, Kamble says, “When we left on August 3 night, my house was just a few feet under water. We knew it would get flooded but not as much. So, hurriedly I had placed a few valuables in the attic and only grabbed my purse and had taken my children along. I did not know this flood would prove to be my worst nightmare.”

When she returned home on August 17, she was shocked. “I was told my house is under water. I knew it would be a challenging task ahead. But I had not imagined that our house would have been destroyed entirely.”

The intensity of the flood could be sensed by looking at almost every house in the colony. Several houses, after being submerged under the water for weeks, had collapsed. The ones still standing look bent and ready to collapse anytime. People have slowly begun returning to their houses, trying to salvage whatever they can. Some trying to clean the utensils, other trying to dry the soaked wooden furniture and clothes.

“Everything smells of decomposed flesh. I have been washing these utensils for over half a day. But the stench won’t leave. When I got home, I saw an animal carcass caught between my house and the debris of the neighbouring house. I can’t get over the sight and the stench of it. It is traumatic,” says 50-year-old Uttam Kotavle, as he sits outside his house with a heap of soiled utensils and clothes and washes them.

Children help clean up houses that were submerged in flood for an entire week. Photo: Sukanya Shantha

Although the families have returned, the civic body is facing challenges in restoring their water and electricity connections. “It was snapped soon after the flood. The underground water line has got damaged in the (house) collapse. We are trying to restore at least a part of water line to help residents wash up their house,” said Sridhar More, a civic officer in charge of this area.

Siddharth Nagar houses almost all the safai karamcharis of Kolhapur city. They have been facing a dual dilemma – of restoring their own houses and also returning to their jobs and cleaning up the city.

While residents say newly-appointed Kolhapur municipal corporation commissioner Mallinath Kalshetti has taken a humane approach and has not insisted that they return to work soon, the pressure will soon build. “We were asked to come to work soon after the water started receding. Some of us did but some said that we have to take care of our shelter for now and would come when we could,” said Mahananda Kamble, who has been working in the sanitation department for over a decade. 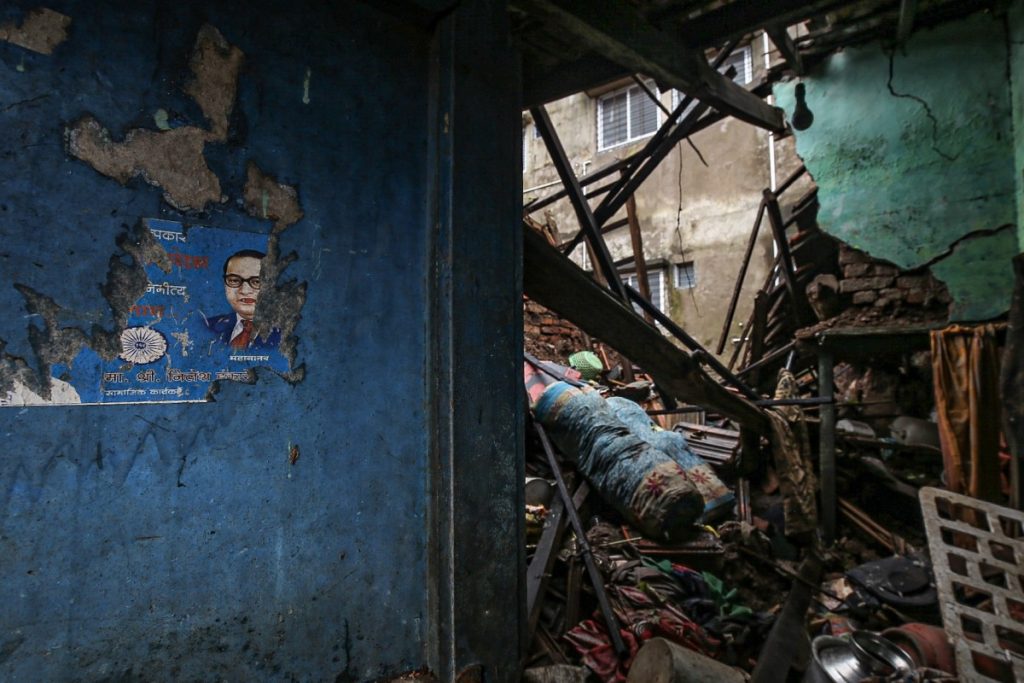 Most houses in Siddharth Nagar have been rendered unliveable after being submerged under flood waters for over a week. Photo: Abhijeet Gurjar

Till August 17, a good two weeks since it had first started to rain incessantly in the region, the state administration had only handed out Rs 5,000 per house as compensation. Panchnamas on the broken houses, of the goods and property lost are yet to be completed.

Some residents of Kolhapur that The Wire spoke to have appreciated the work done by the civic body in past few months, especially since the new commissioner had taken over. But they blamed the rampant construction work undertaken on the banks of the river Panchganga and other smaller water bodies flowing across the city.

Civic activist Sarang Yadwadkar, through information gathered from a series of Right to Information applications, has claimed that the irrigation department was responsible for the city’s flooding as it had tampered with the Development Plan of the city and “unscientifically changed the blue and red flood lines of the Mula- Mutha river”.

When this reporter went to areas outside Kolhapur city, into the villages at the outskirts, the situation looked even grimmer. The sugarcane farms along the way have completely turned brown. The sugarcane farms, awaiting harvest, were under water for days and have now been all destroyed. 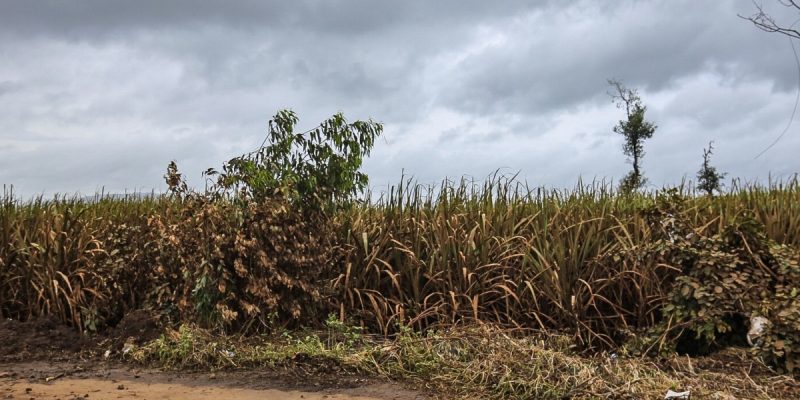 Sugarcane crops have been destroyed across Kolhapur and Sangli district. Photo: Abhijeet Gurjar

As compared to the city, the surrounding villages were ill-equipped to handle the flood. Relief too, people claim, reached them much after it was sent to the cities.

Incessant rains followed by heavy discharge of water from Radhanagari, Warna and Koyna dams in western Maharashtra led to floods in Sangli and Kolhapur district. According to a report published by the South Asia Network on Dams, Rivers and People (SANDRP) on the floods in Kolhapur and Sangli districts, the district administration had failed to ensure timely release of water despite indications of the three dams getting full in the last week of July.

The report, authored by Himanshu Thakkar and Parineeta Dandekar, questions the authorities as to why the dam was allowed to get 100% full. On August 5, these damns were overflowing. In the report, Thakkar and Dandekar questioned, “Why was the water released on August 5 and not on say July 25? The flooding affected around 139 villages in two districts which were marooned for over a week.”

Prayag Chikhali village, in Panhala Taluka, was one such severely-affected village. The village with a population of over 10,000 has been facing a serious challenge since the flood water has receded. With most houses destroyed, and no place to go, the families here have been living in the community halls and nearby schools.

This arrangement worked as long as the schools were shut. Now families have been asked to move out. “As long as we lived here, we were at least protected by the rains. We have no place to go. Our houses have been destroyed. Our farm produce destroyed. We have no clue what to do next,” said Rajan Kamble, a villager. He had grown sugarcane on his five-guntha (approximately 0. 12 acre) land and the flood has destroyed it all. His family, for now, is depending on the relief material that is reaching them from Mumbai, Pune and Delhi, but he says they are more worried about the future. 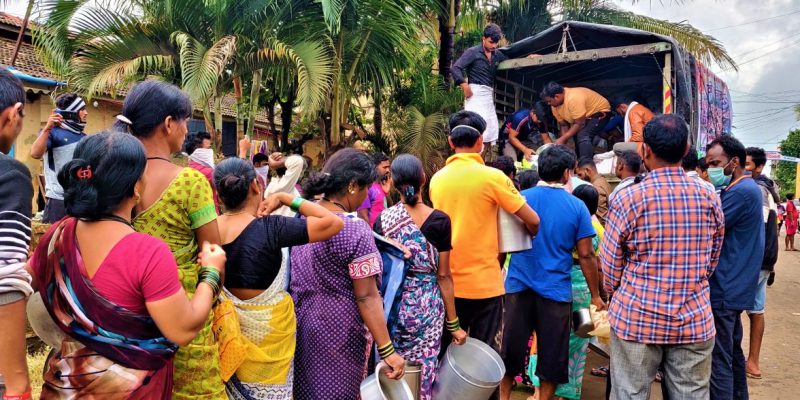 These relief centres in most flood-affected regions are disorganised and managed haphazardly. In some villages, however, the villagers have come taken the responsibilities in their own hands and have been streamlining the relief work. In Aare village, for instance, a committee was set up soon after the floods and all relief centres are being organised and run by the committee members. Every day, food packets, clothes and other essential goods get packed here and are sent out to families.

The committee has also been carrying out door-to-door surveys, taking notes of losses incurred, and drawing estimates for reconstruction. “It will take a long time before our village gets back to normal. We are only seeing to it that no one is left out and every affected individual gets the state’s help,” says P.D. Patil, a committee member.