Schools in many parts of the valley were closed due to the heavy rains which resulted in waterlogging in low-lying areas. 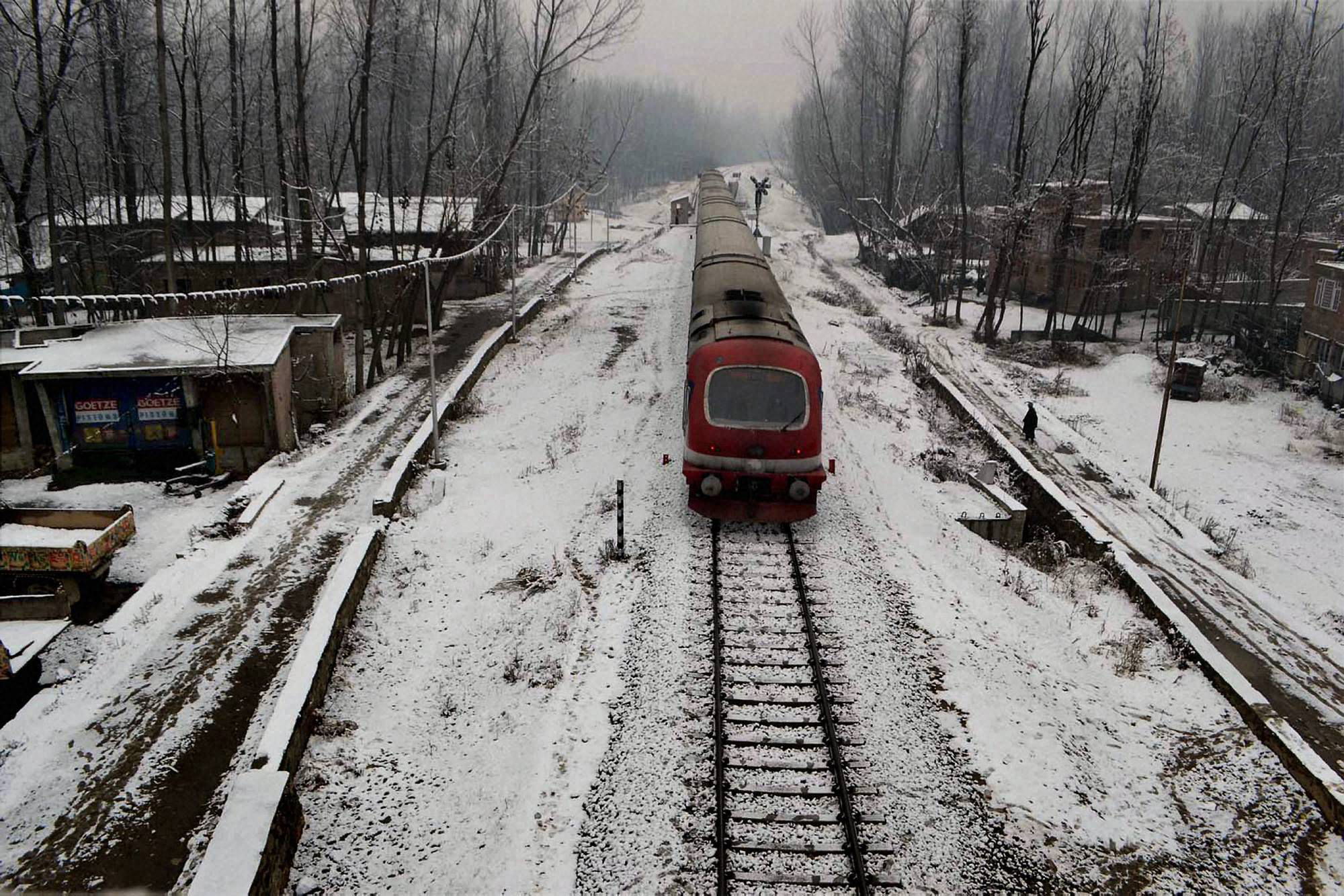 In Kashmir, the Jhelum crossed the danger mark at Sangam in Anantnag district and the water level was rising in other rivers also, officials said.

A high alert has been sounded in areas close to river Chenab and its tributaries, they said.

Snowfall in the higher reaches including the holy cave shrine of Amarnath has brought down the day temperature substantially, the officials said.

Police rescued 50 passengers travelling in ten vehicles which were trapped due to snowfall and heavy rains in the high-altitude area in Kishtwar district on Wednesday afternoon, officials said.

”Snowfall and heavy rains triggered flash-floods in Simthan top area following which 50 passengers including some women and children, were stranded. The police got the track cleared and after a lot of hard work rescued all the passengers,” an official said.

The water level at Sangam in the Anantnag district was measured at 21.60 ft, marginally above the 21-feet mark for flood declaration, they said.

Vaishov stream, which flows mainly through Kulgam district, was flowing dangerously above the flood alert mark. However, the water level has started receding since 10 am, the officials said.

A breach was reported in a temporary diversion along the banks of Vaishov stream as Chamgund in Kulgam, they said adding many areas of the district have been flooded.

Authorities have started moving people from low-lying areas to safer locations, they said.

The Doodhganga stream was also flowing close to flood alarm level at Barzulla in the heart of Srinagar’s civil lines area.

The weatherman had forecast improvement in weather later in the day.

Schools in many parts of the valley were closed due to the heavy rains which resulted in waterlogging in low-lying areas.

Many houses in Bemina, Rambagh and Rajbagh areas of the city were affected due to water-logging.

A group of 14 trekkers was stranded near Tarser Lake in south Kashmir and a rescue team was rushed to the spot from Pahalgam.

The snowfall in the upper reaches and rains in the plains have sent the mercury nosediving and Srinagar witnessed its coldest June day in almost 50 years, according to available data.

Srinagar on Tuesday recorded a maximum temperature of 15° Celsius, which was 14.2° C lower than normal for this time of the year.

An incident of house collapse was also reported from Ramban district, while five people trapped in flash floods in river Ans in Reasi district were rescued by the police, officials said.

The Doda district administration has declared high alert in several areas in the mountainous district.

“We have been forced to declare high alert in areas close to river Chenab and its tributaries, and also on slopes and slide-prone areas of Ramban and Doda districts,” an official said.

The 270-kilometre Jammu-Srinagar national highway was closed for a second consecutive day on Wednesday due to over 30 landslides and mudslides triggered by the heavy rains in the Ramban-Udhampur sector, leaving hundreds of vehicles stranded, officials said.

The traffic on Mughal Road, an alternative link connecting the twin districts of Poonch and Rajouri in the Jammu region with south Kashmir’s Shopian district, was also suspended due to landslides en route, they said.

Besides Doda, the deputy commissioners of Ramban and Kishtwar districts have also ordered the closure of all educational institutions up to higher secondary level including private schools for the day, an official said.

“All schools across Ramban district, including higher secondary schools, shall remain closed today in view of the heavy rainfall and overflowing of nallahs and mudslides at several locations,” Deputy Commissioner Ramban Mussarat Islam said in a tweet.

Officials said one kutcha house in Dachhan collapsed but all its occupants were safe.

“As a part of advisory in view of hostile weather conditions and reports submitted by tehsildars, I have directed CEO Kishtwar to close all educational institutions in District Kishtwar today. We will assess the situation later in the day for further decision,” said District Development Commissioner Kishtwar Ashok Sharma.

“As of now, there is no report of any damage from any part of the district,” the DDC said.

The deputy commissioners of these districts have issued advisories asking people to remain indoors in view of the flood-like situation developed in the mountainous belts.

According to a weather office forecast, heavy rain is predicted in Kishtwar district which may cause temporary disruption of air and surface traffic mainly on the national highway and hilly roads, besides land landslides and shooting stones in vulnerable spots of the highway, according to the advisory issued by the district administration.

“District police Kishtwar has established a help desk and people are advised to stay at home and not to venture out of their home unnecessarily,” it said.

The district administrations have also issued helpline numbers in case of any emergency.