The FRA case is interesting – and relevant – in multiple dimensions, and addressing issues related to the FRA should assume a similarly multidimensional approach. 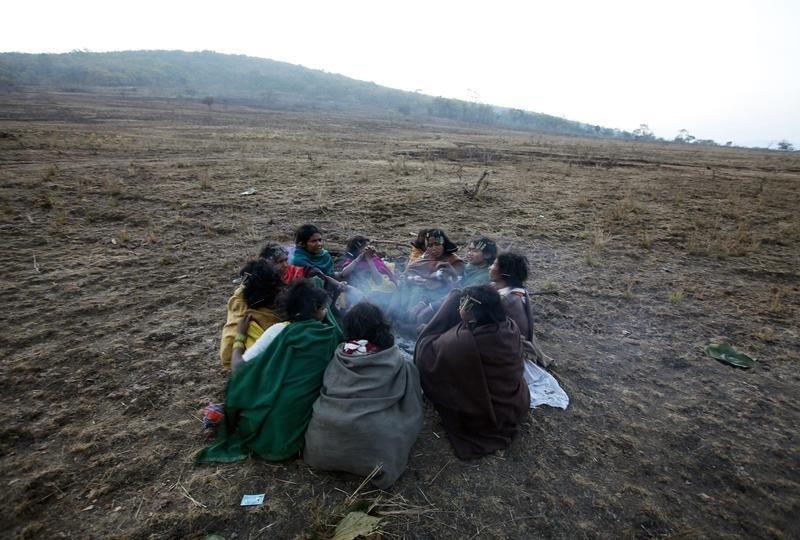 Women from the Dongria Kondh tribe gather on top of the Niyamgiri mountain near Lanjigarh in Odisha in February 2010. Credit: Reinhard Krause/Reuters

Is it forests-dwellers versus forests? In a recent order, the Supreme Court asked state governments what steps they had taken to evict encroachers of forest land, implying that encroachers ought to be evicted. This triggered protests from forest rights groups, who contended that wildlife conservation cannot overcome natural justice goals. At the same time, some wildlife conservationists – especially those who had filed the original petition – said that the Forest Rights Act (FRA) has caused forests to become fragmented, and said some people had filed bogus claims to forest land.

The Centre has now asked the court to modify its order. (Even the Rashtriya Swayam Sevak Sangh had criticised the order and called for an ordinance.) And now, the Supreme Court has stayed its order, asking the states whether the process by which appeals had been rejected was fair.

Whatever the outcome of this process – the result of ideological wrangling that has lasted decades – here are five things that need to be kept in mind going forward.

A section of wildlife conservationists have traditionally been against tribal rights groups, and vice versa. The conservationists believe that the FRA, which came to be in 2006, is a political Act that goes against the older Wildlife Protection Act (WLPA), 1972, and that individual rights have wrongly received more emphasis than community rights. The tribal rights groups often argue that tribals conserve forests unilaterally.

Both claims merit careful analysis – but in the long run, it is strategically better for both to work together. The bigger threat to conservation is the complete loss of forest land and habitat, which marches on regardless of the FRA or the WLPA. For example, the Haryana government has just passed an amendment to the Punjab Land Act, which will open up large tracts of the Aravalli hills to infrastructure development and forest diversion.

The Wetland Rules have also been changed recently, and last year, the Coastal Regulation Zone Act was modified as well. All of them together only make it easier to divert natural areas away.

Wildlife conservation is a value system. Some of it arises is rooted in protectionist approaches that support the existence of great wildernesses that leave out the people. But while the act of – and the motive behind – wildlife conservation is based on a constructed set of values, there is little doubt that ‘natural areas’, or wild areas, are not always a construct. As a result, there is merit in reducing anthropogenic impacts on natural areas such as forests.

The presence of people in forests can compromise these values, depending how much of its natural resources they’re extracting, how much of its land they’re clearing and how much of its wildlife they’re hunting down. If the goal is to have areas with fewer people – or at least areas where their impact is kept in check – we need to understand their patterns of consumption.

The FRA asks for the sustainable use of resources. One way forward is to study which factors influence sustainability. For example, access to markets is a driver that can render resource extraction unsustainable. This was the case with the poaching of the Amur falcons in Nagaland, where local consumption was replaced by a more industrial style of hunting once the ‘products’ could be sold to the people. Forest dwellers’ access to politicians is another factor.

Both advocacy groups need to understand what happens to tribal or forest-dwelling populations that don’t fall under the binaries they are described under. The tribal lobby says tribals save forests. The wildlife lobby says they fragment forests. Neither is always true.

Indeed, while it is true that forest-dwellers in some cases have led initiatives to save forests  – such as in Manipur and Himachal Pradesh – the opposite is also true. In the Jaintia hills in Meghalaya, the tribals have sanctioned unsustainable, and unsafe, mining for coal. In the Sariska tiger reserve, forest-dwellers have a long list of demands that include new roads and ‘controlling’ wild animals that spoil crops.

So the question then is not what either advocacy group wants but what the tribal wants; it is a matter of her self-determination. What do we do if, similar to the Sariska case, forest-dwellers want to change the face of a forest? Just as it is wrong to assume that all tribals want the same thing, it also short-sighted to expect that they will continue living like they always have.

A really big problem in this scenario is implementation. Acts related to the environment have almost never been entirely compliant with the law. Ten years after the previous Wetland Rules had been notified, India’s states had not identified their wetlands, prompting the Supreme Court to order compliance by notifying almost 200,000 wetlands around the country.

In the FRA’s case, many activists and workers have claimed that illegal encroachments have happened as much as that claims have been unfairly rejected. The Centre’s prayer asking the court to modify its order states:

… it is uncertain whether the data furnished by the state governments accurately indicates whether the rejection orders were passed after the observance of due process of law; compliance with principles of natural justice and whether appeal mechanisms have been properly exhausted.

The matter is complicated on multiple levels. For example, what should be the way forward if settlers have come to forest-land and are not historic dwellers in the area? In such cases, disempowered communities become a victim of other pressures, so should the FRA or the WLPA apply?

In the case of the Amchang wildlife sanctuary in Assam, settlers arrived in 1998 after having been displaced by floods. A court order asked for them to be evicted from the sanctuary’s eco-sensitive zone, but rights groups have said this is unfair. In this scenario, everyone agrees that a humanitarian view should be taken – but it is hard to actually do so because of the local politics and the different aspirations of stakeholders. So it is for state governments to step up, take initiative and ensure that the FRA is implemented properly and in a transparent manner.

5. A rights-based approach for wild animals

Despite what community supporters will say, it is dangerous to live around wild animals, and doing so often leads to casualties if not serious injuries. Tribals picking mahua have been known to have encounters with sloth bears, and the collectors of other produce with tigers.

Animal rights is a fairly well-known concept but it is not the same thing as the persistence of wild animals. Animal rights – including the rights of captive and domestic animals – is occupied with the rights of individual animals. Wild animals require a different set of rights: the rights to forage, take refuge and disperse, for example.

Wild animals are ferae naturea – free by nature. A Supreme Court judgement in 2013 had held that wild animals are not the property of the state. Conservationists will contend that at least in sanctuaries, wild animals should be allowed to be free.

It is difficult to use a rights-based approach for wild animals, and the problem is exacerbated if an animal is very dangerous or if one group simply believes they are undesirable. Yet this is something different constituencies should seek to address, perhaps through a mosaic of compensation, representation of the needs of wild animals in decision-making processes and consultations.

The FRA case is interesting – and relevant – in multiple dimensions, and addressing issues related to the FRA should assume a similarly multidimensional approach. Otherwise, one group is going to come out on top at the cost of another. This is why we need more transparent governance and more dialogue – both hard to come by but both worth fighting for.

Neha Sinha is a wildlife conservationist and tweets at @nehaa_sinha. The views expressed here are personal.