Having cleared legal hurdles, the politically-sensitive project is now seeing increasing demands for water from farmers in non-beneficiary areas, whose lands are being acquired. 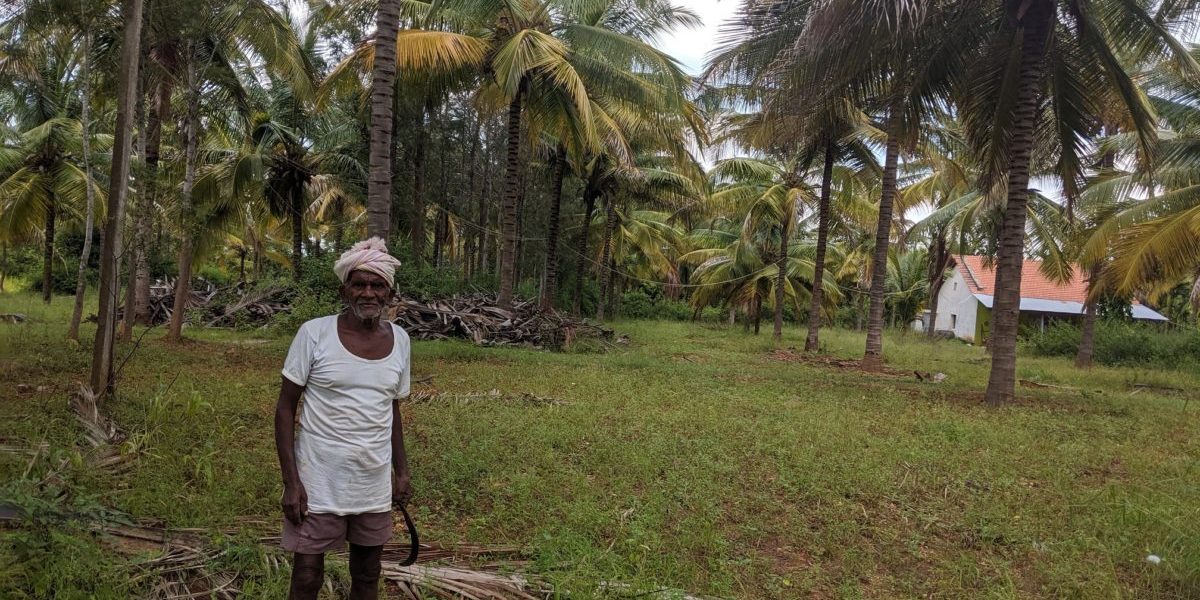 Nangegowda, a farmer at Bommallapura village in Tumakuru district, who will lose a majority of his four-acre holding and his house for the construction of channels for the Yettinahole project. Photo: Mohit M. Rao.

Four years ago, Vasant Kumar’s wholly organic farm in Bommalapura village in Tumakuru district of Karnataka came under the media spotlight as a positive story in an otherwise grim, drought-stricken landscape. His 30 cows and 20-acre farmland were a key part of the state’s first organic dairy initiative using technology and automation to tap into the growing market.

But drought conditions worsened in the years after. Now, he is left with only five cows. “We have four borewells that go dry through summer. We just do not have water or fodder to sustain cows,” he said.

Kumar was apprehensive, but optimistic when he was told earlier this year that the channels for the ambitious Yettinahole Integrated Drinking Water Project would flow through his parched village. Nearly 24.01 TMCft (672 million litres) of “excess” flood waters from four perennial streams of the Western Ghats would be diverted through pumps, pipelines and 30-metre wide concrete channels towards Kolar and Chikkaballapur districts. His village would be en route.

The optimism, however, faded quickly. Surveyors informed him that they would require 150 metres width for construction of the channel. Kumar would lose four acres including a cow shed, a house and even a brick kiln that has become his family’s primary source of income.

Compensation was an immediate concern as the guidance value on which land acquisition would be based was just one-twelfths of the market rate. However, the inflection point for Kumar and others in the village was that not a drop of water could be accessed by them. “How can we be expected to give up our land and livelihood for a water project that doesn’t benefit us?” asks the soft-spoken farmer.

This anger has translated into a stubborn refusal of land acquisition in two taluks (sub-divisions) of Tumakuru district. A month ago, in September, a land acquisition meeting in the village turned into a fiery ultimatum: land will be sold only if 1.5 TMC of water is allocated to the region through the project. In many farms, surveyors have not been allowed to enter the property, while in one instance recounted by villagers, a mob had surrounded an engineer and the police had to be called in.

The contentious Rs. 13,000-crore project (according to 2012-13 prices) was born out a political compulsion to quench the thirst of drought-hit districts of Kolar, Chikkaballapur and Bengaluru Rural in Karnataka state’s Eastern borders. An intra-district water conflict had simmered: with the coastal districts believing the project will impact River Nethravati (four of its tributaries are being diverted), affect fisheries and cause irreparable damage to forests and Western Ghats bio-diversity; while the Eastern hinterlands upped the ante for a “permanent” solution to their water crisis.

The over 273-km of channels to be built, however, pass through districts which also grapple with degrees of drought. While some water was to be provided here, the two taluks of Tumakuru were largely left out.

At Kobbari Doddayanapalya, a Lambani community hamlet where 15 people may lose their land, Natraj K.L. points to the solitary borewell that is supplying water to the village. “Last year, the government dug seven borewells at nearly 1,000-feet deep to mitigate the drinking water crisis. All borewells failed,” he said. He is to lose 0.5 acre from his 2.5-acre coconut farm for the project. “They are concreting the canal. Water won’t even seep into the groundwater. We will continue to remain parched while water flows to other districts,” he said.

In the verdant hills of the Western Ghats, work on eight weirs and pumphouses are nearing completion, while massive 3-m pipelines that will carry pumped water up the hills are being laid, said officials of Visvesvaraya Jala Nigam Ltd (VJNL), which is implementing the project.

In the plains beyond the Ghats, mammoth channels are being carved with portions expected to received water by next year. The channel abruptly ends at the border of Tumakuru district. The 60-km stretch beyond which Kumar’s village Bommalapura and Kobbari Doddayanapalya lie, remain untouched, with some farmers even removing the survey stones.

“We are scared to go into farmers’ fields. We can’t do anything until water is promised to villagers here,” said a supervisor in an infrastructure company responsible for a 30-km stretch of channels. For the past six months nearly 55 workers and 25 machines lay idle in the area.

Originally, 527 minor irrigation tanks were to be filled in five districts with the strict order not to use the tanks for irrigation. VJNL officials said they have submitted the demands for additional water allocation for the protesting regions to the Chief Minister’s office. “We got court clearance (first by National Green Tribunal in May and then by Supreme Court in September) because it was providing drinking water to Kolar and Chikkaballapur districts. We can’t reduce their allocation. Instead, we are attempting to divert water from other projects (Upper Bhadra project, for instance) to villages nearby in our original scheme and use their Yettinahole project allocation to fill tanks in these protesting villages,” said a senior official.

This water jugglery relies on the assumption that 24.01 TMC of water will be available during the three monsoons months when flood waters will be pumped out. 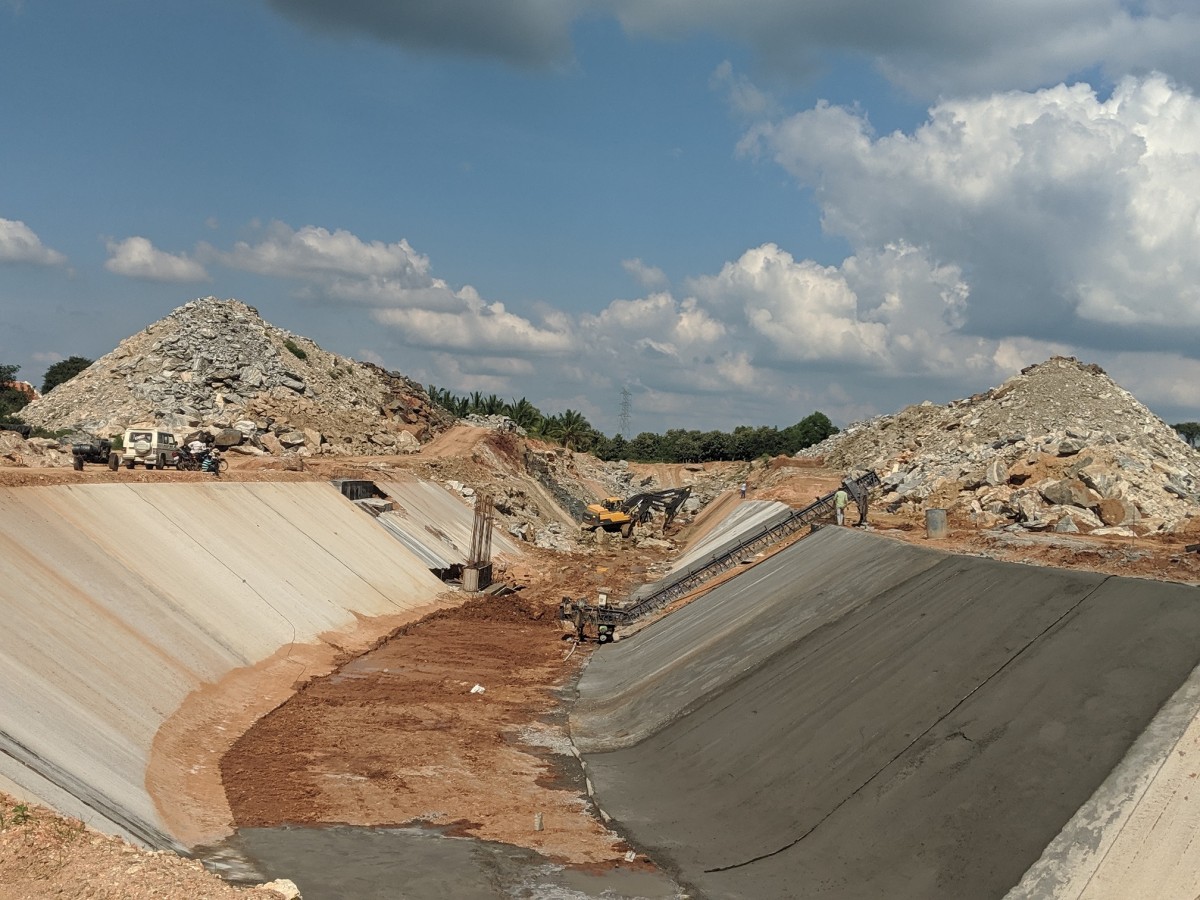 A 150-m width of land will be required to carve out a 30-m wide channel that is designed to carry 24.01TMC of water from the Western Ghats. Construction of the channel is ongoing near Arsikere in Hassan district. Due to farmer’s protest, construction has stalled at the Tumakuru border a few kilometres away. Photo by Mohit M. Rao/Mongabay

There is much skepticism over this figure. In 2015, researchers from the Indian Institute of Science warned that just 9.55 TMC of water – 60 percent lower than expected quantum of water – can be diverted from the streams during the three months.

B.E. Yogendra, a professor at Malnad Engineering College who has been studying water resources in the region, says the government’s calculations are “wishful fantasy”. His own calculations from data accessed between 2003 and 2015 show that yield of Yettinahole project area is at maximum 9.88 TMC (in 2015), minimum of 3.93 TMC (in 2012) and on average 7.17 TMC.

“The project proponents have installed 2.6- to 3.1-m diameter pipes that need a certain minimum inflow before pumping can even begin. This is unlikely to happen as often as they think it will,” he said, and added: “It is politically easy to promise water from the project. Scientifically, it is not possible.”

However, VJNL officials stick by their assumptions are correct. Flow meters installed at the weirs recorded 32 TMC flow in 2018 and 22 TMC in 2019 so far, said the official.

Apart from questioning the water availability, the NGT and Supreme Court petition had challenged the project’s categorisation as a “drinking water project” (instead of an irrigation project). This allowed it to bypass environmental impact assessment norms. “We will never know the number of trees that were actually cut or the consequences on rivers, wildlife corridors and biodiversity… No one will get the promised quantum of water, and by the end of its completion, the project would have cost four times more than its initial estimate…It’ll be a costly mistake,” said H.A. Kishore Kumar, president of the Malenadu Janapara Horatta Samiti and one of the petitioners.

For instance, the implementation of the land acquisition act 2013, will lead to an increase of Rs. 4,500 crore, said officials. This could be the lower end of the estimate. Then, the 5.78-TMC Bhairagundlu balancing reservoir will submerge village land in two districts – one considered as peri-urban with compensation rates of Rs. 32 lakh per acre, and the other a rural area with compensation rates of Rs. 8 lakh. Farmers have demanded parity and here alone an additional Rs. 300 crore will be needed, said an official.

Apart from this, the introduction of Goods and Service Taxes will increase cost by Rs. 500 crore, while the proposal to convert open channels into pipelines (to avoid losses, pilferages and the “risk” of a drinking water being used for irrigation) in Kolar and Chikkaballapur districts will significantly add to the costs, said the official. 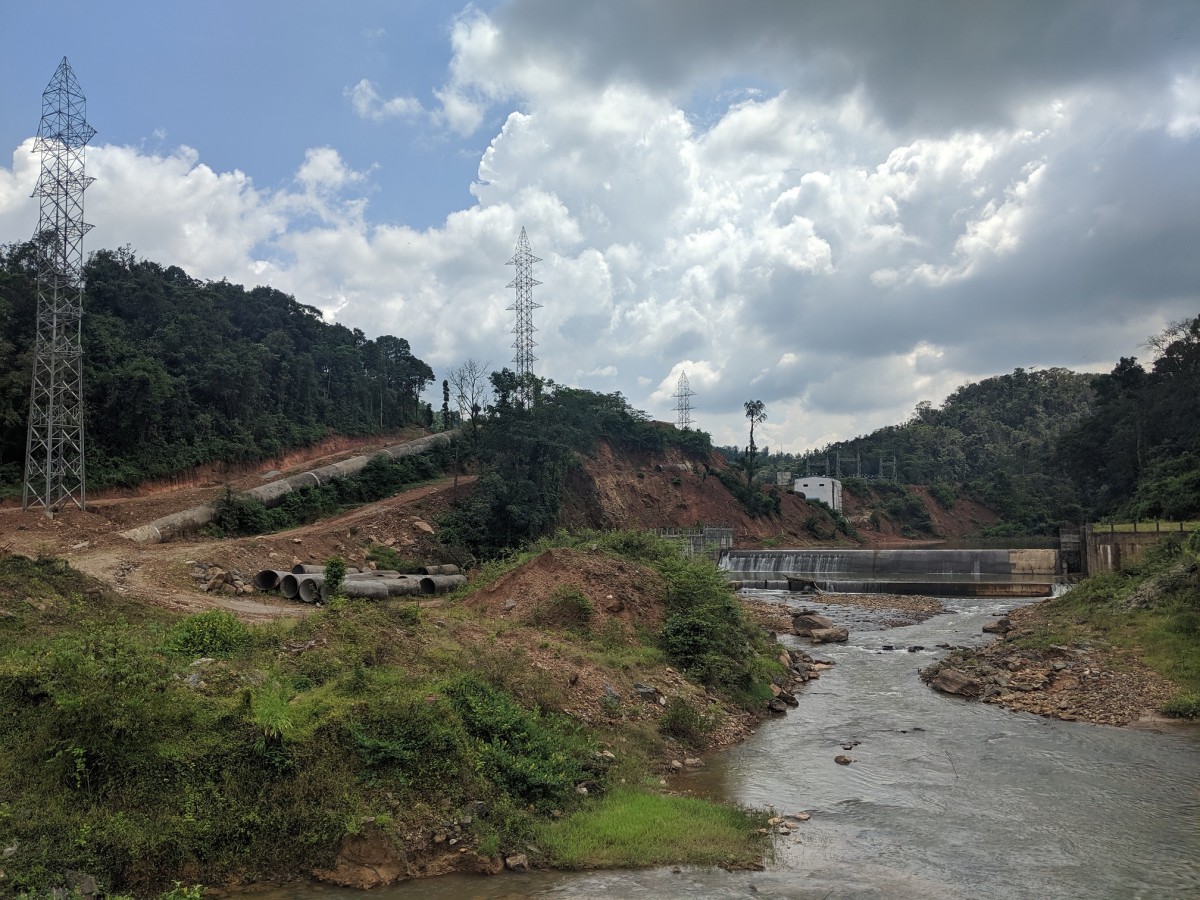 Pipelines and power lines being installed at Keriholla weir. The pipelines will pump the water up the Western Ghats hills before flowing in the open channels in the plains. Photo by Mohit M. Rao/Mongabay

In the Western Ghats, and amidst dusty construction sites, villages by the weirs have few complaints. Their early apprehensions had been quelled quickly by a slew of developmental work. Land losers were offered a tantalising Rs. 38 lakh per acre in a direct buy-out, much more than the Rs. 15 lakh market rate.

Villagers are uncertain if the construction will have a larger impact on the rich fauna around their homes. But, it is among fish that they’ve seen the first impact. “We used to get 1-2 kg of fish daily from the stream. But they have excavated so much mud that the stream turns muddy for three months. No fish can survive in that,” said Moganna Gowda (54), whose farm is adjacent to the Hongadahalla weir site.

Large volumes of mud have been dumped by the stream, and earlier this year, his land – which includes a small homestay– was flooded for the first time in his living memory. Hills have been carved to construct a pumphouse and weir at a Yettinahole site off the Bengaluru-Mangaluru highway near Saklespur. Photo by Mohit M. Rao/Mongabay

During the monsoons, the blue of cascading water and the green of forests intertwine in a canvass flanked by mist-covered peaks. It is hard to imagine water being a concern in one of south India’s wettest areas. However, last year May, streams did dry out. C.M. Balu’s three-acre coffee plantation near Hiridanahalli usually yields 250 sacks of beans. Last year, he got just 45 sacks of beans. “There is a sense that rainfall patterns have changed – what was three months of good rains during my father’s time is now extreme rainfall for a few days and long periods of dryness,” he said. “I feel the government should divert only when the monsoons are good. Else, it will be like stealing our water to give someone else.”