The plant, Arisaema translucens, had not been recorded since it was first collected from southern India in 1932. 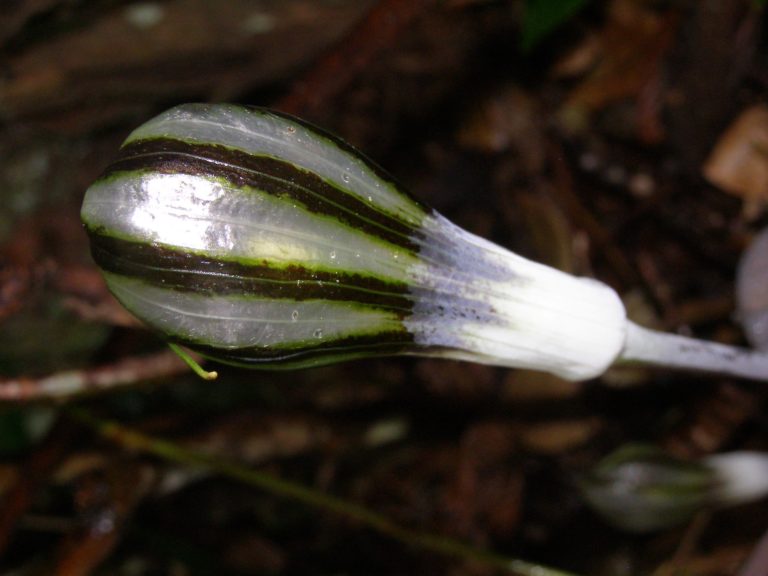 Arisaema translucens has a unique translucent spathe not recorded in other Arisaema species. Credit: Tarun Chhabra/Mongabay

The plant, Arisaema translucens, had not been recorded since it was first collected from southern India in 1932.

Arisaema translucens has a unique translucent spathe not recorded in other Arisaema species. Credit: Tarun Chhabra/Mongabay

Botanist Edward Barnes first collected this plant in 1932 from the Nilgiri mountains in southern India. The plant, commonly called a cobra lily and noted for its translucent spathe (a large leaf like plant part that encloses a cluster of flowers), was then scientifically described in 1933. Since then, there have been no confirmed records of this species.

Intrigued by the plant’s record, dentist and naturalist Tarun Chhabra began combing the Nilgiris for Arisaema translucens. He searched for the plant year after year, and finally in 2009, chanced upon several flowering Arisaema translucens within a small patch of shola forest – a mosaic of grassland and stunted evergreen tree species – within the Nilgiris.

“It felt unbelievable to finally see this plant. It looks beautiful,” Chhabra said.

Botanist and co-author K.M. Prabhukumar of the Centre for Medicinal Plants Research in Kerala, who collected specimens of these plants in 2016, added that no other Arisaema species has such translucent spathe, making this species unique.

The team also collected specimens of another rare cobra lily species, Arisaema tuberculatum from the Nilgiris. Together with scientists K.M. Prabhukumar, Indira Balachandran and others, Chhabra then described the two species in a new study published in Phytotaxa. Both species are believed to be found only in southern India.

Many species of Arisaema, such as the Japanese A. heterocephalum, are prized for their beauty and threatened by illegal collection. The researchers say that A. translucens could also face a similar threat and needs immediate protection.

Moreover, the small patch of shola where the species was found is surrounded by expanding tea estates that threaten to wipe out the plant’s habitat.

“Big tea estates slowly whittle away these shola forests, and nobody even gets to know,” Chhabra said. “Small patches of sholas disappear every day, and these plants, too, may just disappear one day. So, we need to be cautious. We don’t want people to be hunting for these plants, and we need to protect these plants.”

Chhabra hopes to work with the tea estates to help protect forest areas that harbor these rare species.

While the researchers have not yet assessed the conservation status of A. translucens, the species is most likely to be at risk of extinction, the team says.

“I think the plant is threatened, but in order to know if it is critically endangered or not, somebody has to study the species in greater detail,” Chhabra said. “We found the species in one patch, but it is possible that there are patches nearby that have this plant, and haven’t been explored yet. In that case the species might be safer.”

Shreya Dasgupta is a science and environmental writer based in India. A former wildlife researcher, she writes about animals, conservation, biology, people and places. Her work has appeared in BBC Earth, New Scientist, Ensia, The Scientist, The Guardian and others. She lives in Bangalore with her husband and cat.