The deluge in Kerala has been a combined result of a set of interacting atmospheric, oceanic and human factors. 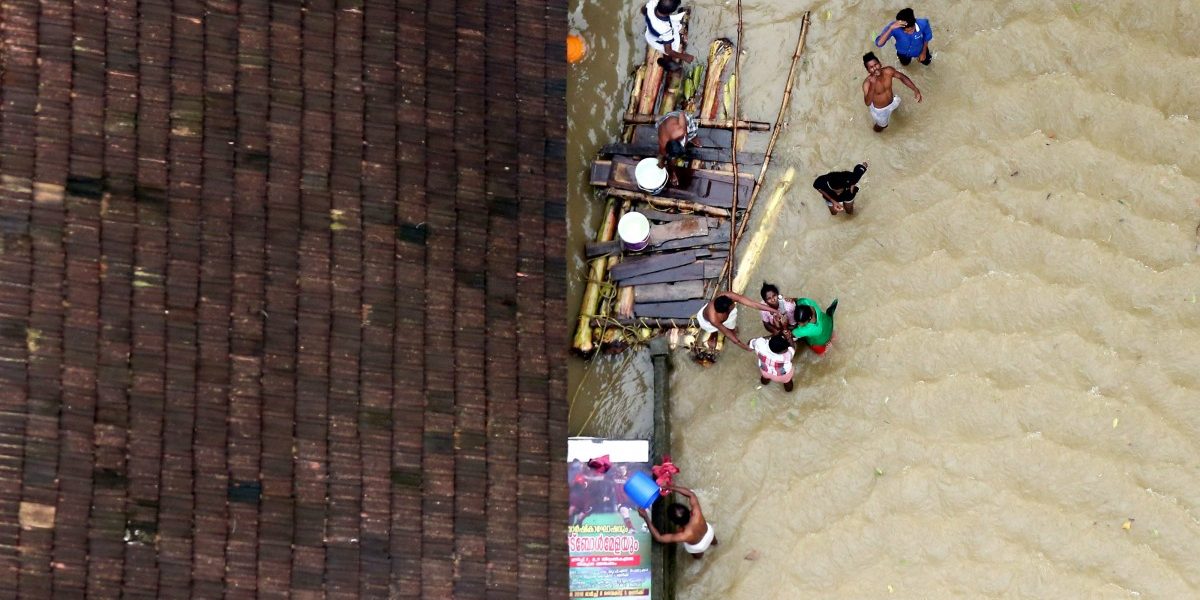 Kerala has received over 40% more rain than average since June 1, the starting point of monsoon. Credit: Reuters

As flood waters recede in Kerala and boats engaged in rescue return to the coast with people cheering the fishers and other heroes, experts are probing what caused the worst deluge in almost a century in India’s southern province. The flood, they say, came as a cumulative result of climatic, environmental and human factors, playing out in the atmosphere, oceans near and far, and terrains high and low.

As for the climatic factors, scientists agree that the magnitude and frequency of flooding will increase with a warming climate across the world. However, the characteristics of floods differ locally over different geographic features.

In the short term, it is low-pressure systems over northwest Bay of Bengal that caused heavy rains in Kerala, as director of the Meteorological Centre in Thiruvananthapuram K. Santosh explained. “Strengthening of the monsoon flow due to the formation of the low-pressure system has caused widespread intense rainfall activity over south peninsular India,” he told indiaclimatedialogue.net.

Wind flows to low-pressure areas and brings rain. Low pressure over the Bay of Bengal is a normal phenomenon during the monsoon. However, this time there were several such formations, contributing to continued rain, Santosh explained. Wind flows from the Arabian Sea towards the land, and the Western Ghats catches it, causing rainfall.

The state has received over 40% more rain than average since June 1, the starting point of monsoon. However, on certain days in places such as Wayanad, the rain was many times the normal level. 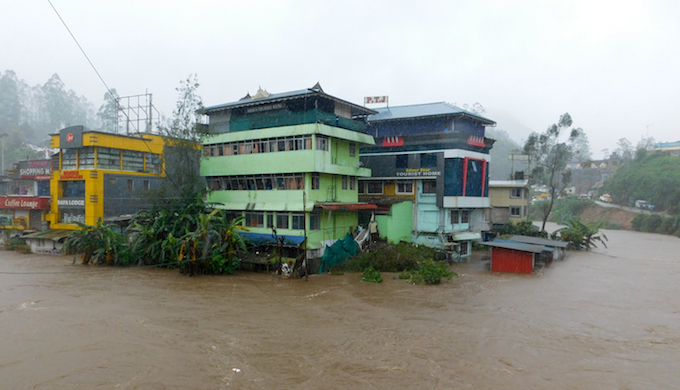 Along with low-pressure systems in the Bay of Bengal, wind over the Arabian Sea, and remote influences such as storms in the Pacific have contributed to the current scenario, scientists at the Cochin University of Science and Technology (CUSAT) said. “There have been several low-pressure systems in the Bay of Bengal since May, and strong wind over the Arabian Sea for many days,” said Abhilash S., assistant professor at the CUSAT Department of Atmospheric Sciences, told indiaclimatedialogue.net. “Monsoon is a highly complex system that scientists have yet to fully understand. It is influenced by several atmospheric and oceanic phenomena.”

Weather forecasters often find it difficult to factor in oceanic influences, due to very little direct observation facilities offshore. On shore, fishers have said that the wind patterns in the Arabian Sea have been worrying. Jerome John, a middle-aged fisherman in Anchuthengu village near Thiruvananthapuram, said that his crew could not launch boats since August 14 due to strong winds. “The wind has been very strong even before, and we missed a lot of fishing days.”

Amidst this unusual weather, C.K. Rajan, former director of CUSAT Centre for Monsoon Studies, acknowledged that Kerala’s monsoon regime has been undergoing changes over the past decade and a half. “The shift became more pronounced this time,” he pointed out. The usual period of monsoon is June to September, but this time heavy rains have stared right from May. Rajan blames it on the larger trend of climate change that is changing rainfall patterns across the world. However, scientists often caution against attributing a single event to climate change.

In the case of Kerala floods, many scientists have been quick to point at the environmental factors as well. Their explanation is that between the Earth’s surface and atmosphere, water exists in abundance and is available to us as rain, moisture (intercepted by forests), in rivers, groundwater, and the larger share in oceans. Floods are linked to these different points in the water cycle.

Scientists, including Madhav Gadgil, former professor and founder of the Centre for Ecological Sciences at the Indian Institute of Science, Bangalore, have noted that rampant forest destruction over the Western Ghats has contributed to the disaster in Kerala.

“Mountains and forests play an important role to intercept those tiny water molecules hanging in the air called moisture,” explained Nandakumar D., former professor of geography at University College, Thiruvananthapuram, and senior advisor, climate change and environment at the non-profit Intercooperation Social Development. “Whenever the weather conditions (such as temperature, humidity, pollens and dust and other parameters) are ripe, this moisture condenses (and is too heavy for the air to hold it anymore) and gravity brings it down as precipitation. So do the copious leaves of the canopy too where the moisture condenses on their smooth surfaces.” 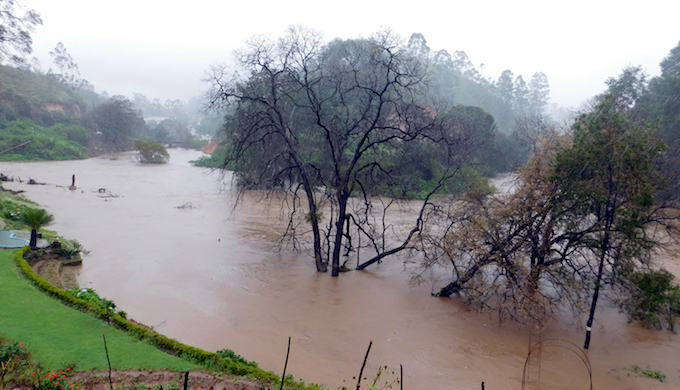 Water droplets get too heavy on the leaf surface, drip and trickle down through the moss-laden trunks of the trees and reach the thick layer of humus – dead and fallen leaves and twigs that are constantly broken down and decomposed. Thus, the humus on the forest floor acts as sponge that stores the water and regulates its flow into small rivulets. Myriad of these rivulets join together to form mountain streams and become rivers, continuing the water flow to the sea. From its origin from higher altitudes to the river mouth, these rivulets and river together is called a watershed, comprising many micro-watersheds.

“Thousands of such micro-watersheds can be located in the Western Ghats, a chain of hills roughly in north-south orientation parallel to Arabian sea about 1,490 km in length and an area of 129,037 sq. km,” Nandakumar told indiaclimatedialogue.net. “The annual rainfall in these watersheds ranges from as much as 8,000 mm in the south-western corner of the upper Nilgiris to 500 mm in the Moyar gorge just 30 km to its east.”

Gadgil has also pointed out that massive deforestation happened historically in this region – starting with the construction of Indian Railways, where a million wooden sleepers were used every year. Independent India needed more cropland and other development activities. The forest took that onslaught too. “A decreasing trend in the forest cover continued till the Supreme Court ruling against clear felling in 1996. Studies have revealed that deforestation in the state of Kerala has been very high,” Nandakumar said.

With the construction of the Mullaperiyar Dam in 1895, another set of human interventions into the mountain ecosystem started. Then came hydroelectric power generation systems, starting with project at Pallivasal that began in 1933. Since then, 33 hydropower projects came up. Some of them challenged the ecological balance of the mountain system, and even the physical stability, as most of the reservoirs were built in the lineaments of the Western Ghats’ geologic structures.

“These fractures are the weak edges of a fault plain. Adding to this onslaught, roads, stone quarries, extensive slope-destabilising tourism resorts and increasing population densities caused extreme environmental degradation along these higher altitudes,” Nandakumar explained. “Take for example the district of Idukki, which is wholly in the Western Ghats. Idukki has the highest number of reservoirs – Mulllaperiyar, Idukki arch dam, Ponmudi dam, Anayirangal, Mattupetti, Kundala, Idamalayar and Bhoothathankettu.” “All these reservoirs are constructed across the longest river of the state, Periyar. With the construction of these dams, roads opened up into otherwise inaccessible reaches of the mountain,” Nandakumar told indiaclimatedialogue.net. “Almost entire catchment areas were encroached upon, illegal constructions and illegal quarries became rampant. Natural slopes were disturbed, and vertical cuttings were excavated to build many storeyed buildings as the demand from increasing tourism needed to be met.”

Geomorphologists explain that once the forest canopy is removed and natural slope destabilised, heavy and continuous rains would accelerate seepage, which triggers landslides.

The inevitable opening of sluice gates of the state’s reservoirs and consequent flooding downstream became a trigger for the disaster. Rivers in their natural courses create vast floodplains. “These floodplains swell up to accommodate excess water whenever there is heavy rainfall. As these floodplains are fertile, traditionally, there are seasonal farming practices, often vegetables and banana plantations spring up during the non-rainy months,” Nandakumar said. “However, increasing urbanisation encroached into these floodplains. Buildings were constructed, and real estate boomed, which were permanent as opposed to the temporary seasonal farming. In the higher reaches, tourism attracted real estate activities and floodplains became resorts.” So, there is no way water could seep into the ground in many places.

As the rivers reach the coast, and flow into backwaters before draining out into estuaries, they dump most of the sediments that are brought down, creating small deltaic islands. These islands and a large part of the land surrounding the backwaters also submerge when the water from the floodplains reaches the backwater. There is rampant construction on these islands and on the riverbanks as well.

“The incessant rain and swollen rivers did what they naturally do. They took over the floodplains, took down whatever humans constructed across their path, and drained into backwaters, submerging the areas they naturally inundate, and we call it a disaster,” Nandakumar said.

At the same time, the drainage to the sea was reduced due to a set of oceanic phenomena. As scientists at the Indian National Centre for Ocean Information Services (INCOIS), Hyderabad, pointed out, the sea level remained higher than usual recently due to a set of reasons. “The perigean spring tides could lead to flooding all along the Kerala coast,” Balakrishnan Nair T.M., head of INCOIS Ocean Information and Forecast Services Group, told indiaclimatedialogue.net. That could also worsen the flood situation in low-lying areas, as the sea would not be able to absorb the drainage from flooded rivers and reservoirs. INCOIS issued a tidal flooding warning from August 11 till 15.

Tides are long-period waves that roll around the planet as the ocean is pulled back and forth as the moon and the sun interact with the Earth in their monthly and yearly orbits. As the US National Oceanographic and Atmospheric Agency (NOAA) explains, “The moon follows an elliptical path around the Earth in its monthly orbit, and the Earth follows an elliptical path in its yearly orbit around the sun. This means that, at times, the moon and the sun are closer to Earth…: the gravitational pull they exert is stronger, resulting in slightly higher tides. Once every 28 days, the moon reaches a ‘perigee’, its closest point of approach to the Earth. This is the point at which the gravitational pull of the moon is strongest. During these periods, there will be a slight increase in the average range of tides.”

Still, in some places, coastal flooding occurs as a result of the combined effects of perigean spring tide and, typically, in response to strong onshore winds. The Arabian Sea has been facing such strong winds during the monsoon season, sometimes causing an inward push of the seawater. INCOIS scientists have explained that these factors delayed the receding of the floodwaters in Kerala.

In short, the deluge in Kerala has been a combined result of a set of interacting atmospheric, oceanic and human factors.