Explainer: The Increasing Lightning Strikes, Deaths and the Role of Climate Change

As the world warms up, we might see increasing intensities and frequencies of lightning strikes, suggest studies. 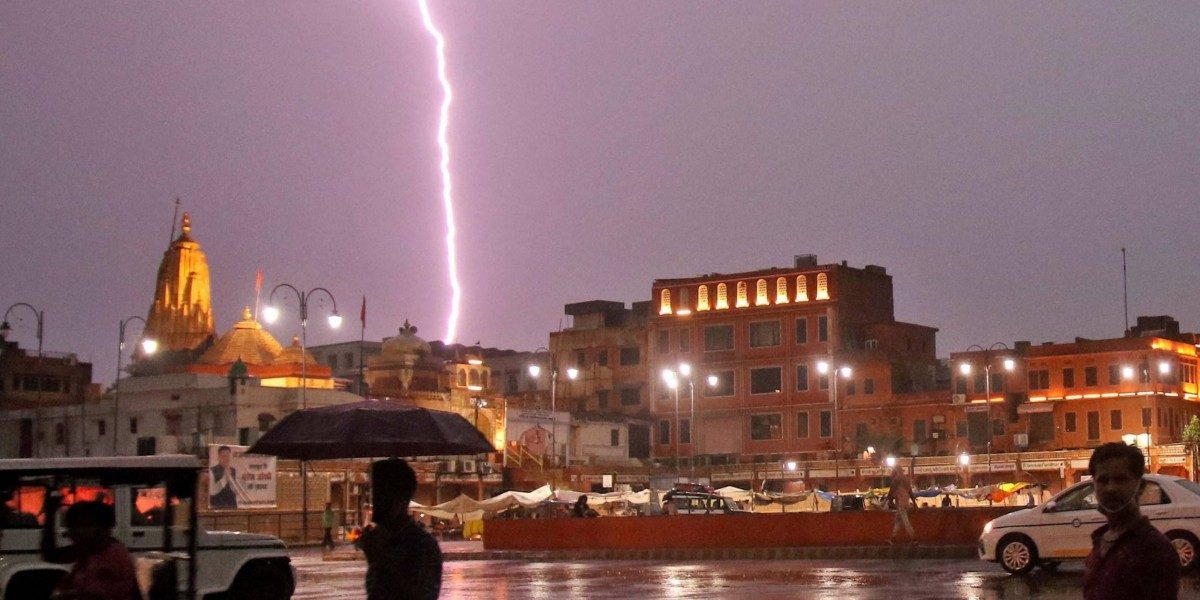 A commuter crosses a road as it rains during a lightning strike, in Jaipur, Sunday, July 11, 2021. Photo: PTI

Kochi: On September 28, four people, including a woman and her two children, died after lightning struck them in Karnataka’s Yadgir district. Earlier in July, lightning killed 47 people and injured 70 in Madhya Pradesh alone – all in a week’s span.

Over the past few weeks and months, there have been numerous reports of deaths caused by lightning. So, is India seeing an uptick in such instances now? And, does climate change play a role here?

In simple terms, lightning is a discharge of electricity from a cloud. It takes the form of a long (read more than one kilometer) spark.

The impact of a lightning strike on a person depends on several factors – from the intensity of the current (as per some estimates, this can range from 10,000 to 2,00,000 amperes of current) to what kind of strike it is. Direct strikes, for example, occur when lightning hits an object directly. This is not as common as a ground strike, wherein electricity discharges into and along the ground.

While lightning can burn, it can also cause muscle spasms, tear blood vessels, lead to multi-system dysfunction, and instant death.

India has been witnessing several deaths caused by lightning over the past few months. People have been struck by lightning while taking selfies atop forts. Between July 4 and 10, lightning killed 47 people and injured 70 in Madhya Pradesh, The Week reported. Authorities said that last week, in a five-day span, 39 people had died in Uttar Pradesh from lightning strikes.

Lightning affects livestock and wildlife, too. Cattle are common casualties. On August 3, a shepherd died along with his herd of 50 buffaloes, when lightning struck them in Andhra Pradesh’s Alluri Seetarama Raju district.

Last year, a lightning strike killed a herd of 18 elephants in Assam. According to The Hindu, the state forest department’s autopsy report had revealed that a “strong negative lightning flash with a peak current of 39,000 amperes” had killed them.

Also read: One in Three Heat Deaths Since 1991 Linked to Climate Change

The rise in lightning strikes and frequencies

According to the National Crime Records Bureau (NCRB) released in 2015, around 2,500 people die due to lightning strikes in India every year. A 2020 study pegged that number at around 2,000. As per the latest NCRB data, lightning strikes caused 2,880 deaths in 2021.

Scientists from institutes, including the Banaras Hindu University, analysed instances of lightning strikes between 1998 and 2013 and found that parts of Jammu and Kashmir, Punjab and Himachal Pradesh are very vulnerable. During this period, the deaths caused by lightning strikes were the highest in Madhya Pradesh, Maharashtra and Orissa – causing around 313, 281 and 255 deaths, respectively, in a year.

Though hilly tracts such as parts of Jammu and Kashmir, Himachal Pradesh, Kerala and Assam have also witnessed similar numbers of lightning strikes, the low population densities in these areas meant fewer fatalities, the scientists wrote.

However, several reports have pointed to an increase in the frequency of lightning strikes in India.

A report by the Centre for Science and Environment (CSE) and Down to Earth last year found that India witnessed 18.5 million lightning strikes between April 2020 and March 2021 – a 34% rise as compared to the same period in the previous year.

The Annual Lightning Report 2020-21, published by the Lightning Resilient India Campaign (LRIC), also recorded the same increase over these years. (The LRIC is a joint initiative of several institutions, including the Climate Resilient Observing Systems Promotion Council and the India Meteorological Department, which aims to reduce lightning deaths by 80% in three years.)

Meanwhile, some regions have also witnessed a rise in the frequency of lightning strikes. Punjab, for instance, witnessed a whopping 331% increase in lightning strikes as compared to the previous year, according to the Annual Lightning Report 2021. The states that recorded a 100-168% increase include West Bengal, Himachal Pradesh, Haryana and Bihar.

Is climate change to blame?

Many studies have shown that climate change may be increasing lightning frequencies and intensities. In 2014, a study projected an increase in lightning strikes in the US due to global warming. That’s because the atmospheric phenomenon of lightning is linked to climate. The heating of land masses can cause fluctuations in temperature and moisture which can in turn influence atmospheric stability – and thus trigger the birth of thunderstorms.

As the world gets warmer due to human activities such as fossil fuel use, the frequency and intensity of lightning strikes over the Indian subcontinent is also likely to increase, according to a recent study by scientists at the Indian Institute of Tropical Meteorology. It found an increase in ‘lighting flash density’ – a measure of the frequency of lightning strikes – between 2009 and 2011 over the Indian subcontinent.

It also found that as the concentration of aerosols and carbon dioxide increased, lightning flash density did too. Other scientists have also linked the uptick in lightning strikes in India to climate change. Experts, including Sanjay Srivastava, chairman of the Climate Resilient Observing Systems Promotion Council, told the Associated Press that deforestation, depletion of water bodies and pollution contribute to climate change and in turn, cause an increase in lightning.

Taking into account the increase in lightning strikes in the country, the India Meteorological Department began lightning forecasts from 2019. But, while the early warning system has improved, there is a “lack of protocol and mechanism for last mile public notification and interventions”, the Annual Lightning Report 2021 noted. There is also a need for more research on lightning and climate, it added.

According to the report, a lightning risk management strategy has to be customised for each state, taking into account seasonality, intensity and frequency of lightning. Lightning microzonation within states can also help in handling the risks posed by strikes, it said. The report’s state risk management analysis shows that states like Odisha and Andhra Pradesh can bring down deaths by almost 70% in a “short time”.

The National Disaster Management Authority has also set up a protocol for early warning dissemination on thunderstorm and lightning in July 2021, which also specifies the ideal requisites of such a system including a mechanism to disseminate this information below district level.