Experts and activists question the manner in which OIL managed to get the green nod for operations at the Dibru-Saikhowa National Park. 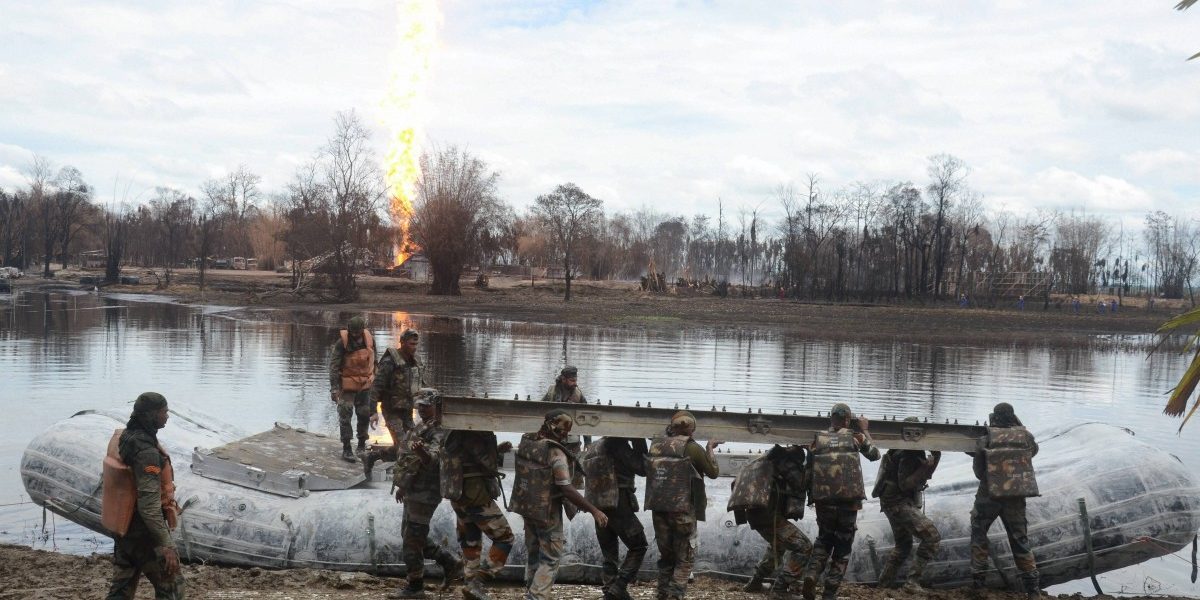 Guwahati: State-owned Oil India Limited (OIL) had managed to get environmental clearances to expand its hydrocarbon testing and drilling activity in the eco-sensitive Baghjan area of Assam’s Tinsukia district without facing public hearings, an official document reviewed by The Wire shows.

Public hearings and a detailed environmental impact assessment (EIA) plan were mandatory for getting approval to carry out any oil and gas exploration activity near eco-sensitive zones until the Union environment ministry tweaked this norm in January this year, exempting oil and gas firms, looking to conduct exploratory drilling, from seeking an environmental clearance.

The Assam State Pollution Control Board on Friday issued a notice to the oil major over alleged violations of green norms, directing it to close down all production and drilling operations in its Baghjan oil field. 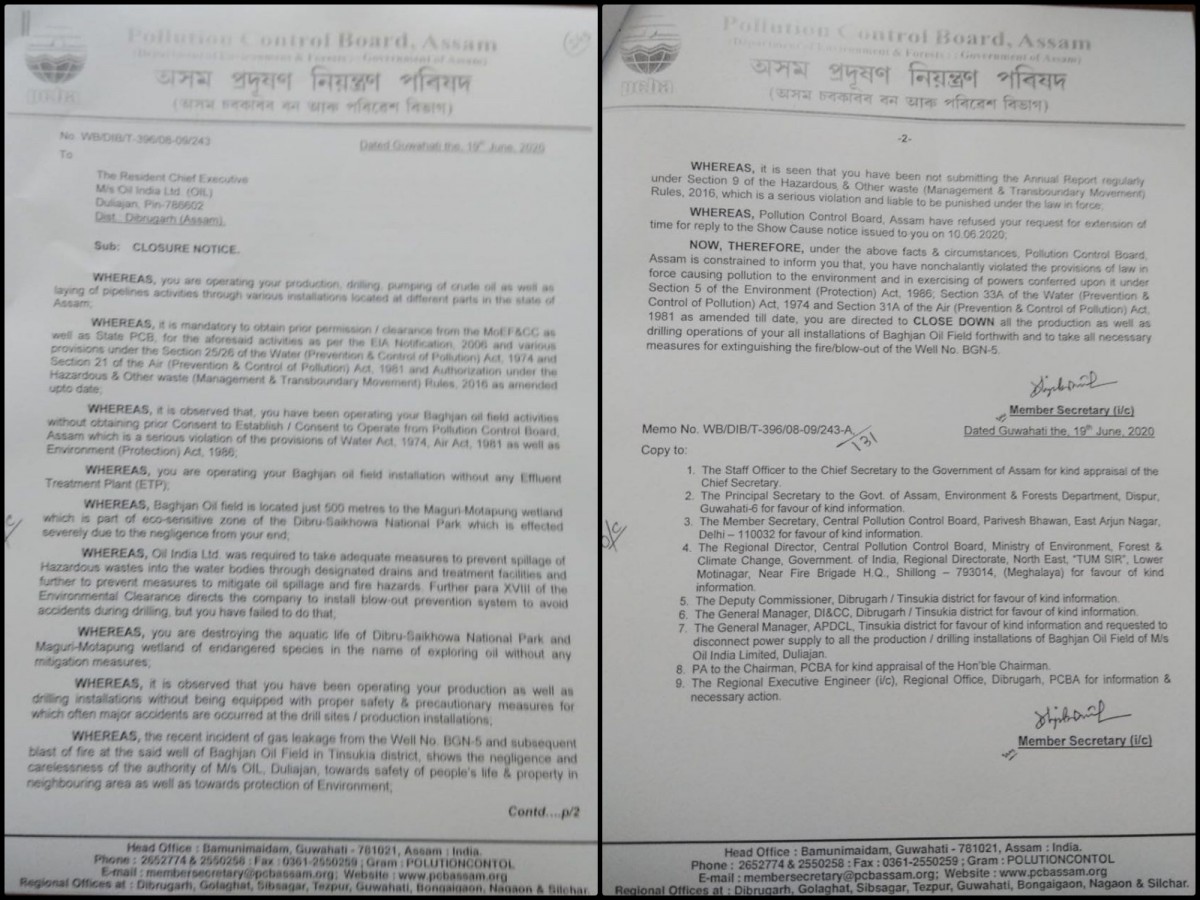 OIL is in the eye of a storm. On June 8, a massive fire triggered by a gas well blowout in the company’s Baghjan oil field left a trail devastation in the area, endangering the biodiversity of the adjoining Dibru-Saikhowa National Park. Two OIL employees lost their lives in the fire. An FIR has been registered against the company at the Baghjan police station.

Documents with this correspondent show that OIL has benefitted from lax environmental norms.

When the oil major had first managed to get environmental clearances for 26 development and 15 exploratory wells in Tinsukia district, from the then Congress-led UPA government in November 2011, it had conducted public hearings on July 8, 2011 and August 26, 2011.

Also read: Baghjan Oil Well Disaster: What Is a Blow Out and How Does it Occur?

In 2016, OIL decided to extend its drilling and testing of hydrocarbons to seven more locations at the Dibru-Saikhowa National Park. But it sought to bypass the public hearings clause by requesting the environment ministry to take into account the earlier public hearings of July 8, 2011 and August 26, 2011, which experts are now questioning.

Minutes of an Expert Appraisal Committee (EAC) meeting of the environment ministry, held in February 2017, show that OIL had requested that it be granted permission to use the earlier public hearings. A copy of the minutes is with The Wire. 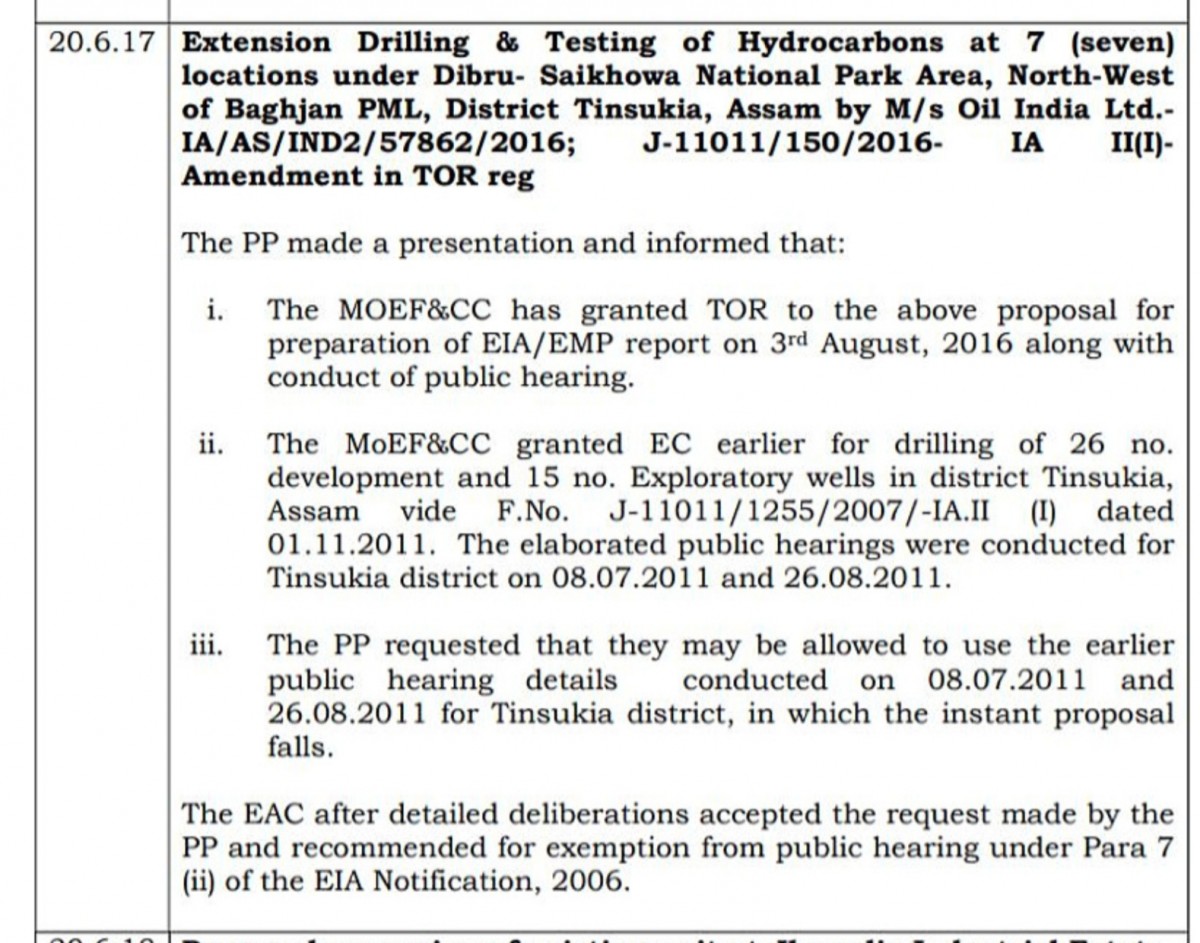 Minutes of the EAC meeting of the environment ministry held in February 2017.

Experts and green activists have now raised concerns over the manner in which OIL managed to get approval for this from the environment ministry.

Manju Menon, senior fellow at the Delhi-based Centre for Policy Research, said, “The environment ministry allowed Baghjan oil wells to expand without public hearings in December 2019 because OIL kept saying that the local communities won’t allow this expansion. Now, after this terrible disaster in Assam, is it not justified that the public of Assam had no faith in OIL?”

“The regulatory pushes and pulls around EIA approvals and oil exploration and drilling projects in these last few years show that even though the government wants to allow corporate extraction of fossil fuels from ecologically sensitive areas like Baghjan in Assam and the Cauvery delta in Tamil Nadu, the Central government is unwilling to allow local communities to speak their minds about these projects,” Menon, who has worked extensively in Assam, argued.

How green norms were tweaked

Menon was referring to a January 2020 environment ministry order amending a 2006 notification that had made it mandatory for oil and gas firms to have a detailed EIA plan, besides subjecting themselves to public hearings before undertaking any exploration projects.

Under the new rules, oil and gas exploration has been categorised as a B2 activity – a category reserved for small-scale projects for which no EIA or public hearings are required. The onus to grant environmental clearances for such projects now lies with state authorities.

“Regulatory changes in January 2020 pushed these massive projects to the ‘B2’ category, so that they would not need to conduct public hearings,” Menon said.

OIL benefitted from the tweak as it finally received the environment ministry’s nod to drill in seven locations under the Dibru-Saikhowa National Park on May 20.

OIL, for its part, maintains that it’s the state pollution control board that has to conduct public hearings on matters related to environmental safety. “It’s the job of the state pollution control board…but we have also held public consultations with district authorities several times,” Tridiv Hazarika, public relations officer, OIL, told The Wire over the phone last Monday.

The environment ministry is yet to respond to an email seeking its comment. The article will be updated when a response is received.

Supreme Court lawyer Venkatesh Rao argues that OIL cannot take advantage of the January 2020 notification to carry out drilling work in an eco-sensitive zone. “It could be legally challenged,” he said.

“This amendment is amenable to judicial scrutiny as it first carves out projects relating to exploration from the exemptions, and later categorises all projects including exploration as B2, which would straight away mean that the assessment would be by the state (government) and there would be no requirement of an environmental clearance,” Rao added.

Apurba Ballav Goswami, a journalist and green activist based in Assam’s Golaghat district, criticised the manner in which OIL has been expanding its drilling operations in the Dibru-Saikhowa National Park.

“OIL has promised to build schools and hospitals under its corporate social responsibility (CRS) plan, but it has shown utter disregard to the environmental safety issue,” Goswami, on whose complaint the police have filed an FIR against OIL and its outsourced private well operator John Energy, said.

Meanwhile, a preliminary survey report by the Wildlife Institute of India (WII), Dehradun, said “a dead dolphin and several carcasses of fishes, herpetofauna and insects were encountered” on the drilling site. WII is an autonomous institute under the Ministry of Environment, Forest and Climate Change.

“There is a leakage of hazardous and toxic chemicals, which is dangerous to life in general, and this toxicity is known to persist in aquatic and soil systems for long, leading to prolonged ill effects on all life forms, including humans,” the report went on to say.

Adding a word of caution, WII said in its report, “It is important that Oil India Limited (OIL) should come up with a holistic environmental-damage management and mitigation plan of existing fields before initiating the approved new wells.”

Y. Suryanarayana, chairperson of the Assam pollution control board, said on Friday that the Baghjan oil field was being operated without the “consent to establish and consent to operate”, news portal EastMojo reported.

The gas well fire had killed two OIL firefighters and injured another. As many as 1,600 families have been evacuated from the affected zone.