Environmental Issues Zoom out of Focus in the Budget

While environmental issues like air and river pollution were highlighted in the interim budget in February, they were not adequately addressed in the full budget presented by the NDA government.

Protecting tribal rights, which were in focus before the elections, did not find a space in the budget speech. Photo: Azhar Feder/Wikimedia Commons

Released a day before the Union budget, Indian government’s Economic Survey 2018-19 advocated for making the cleaning of rivers an integral part of the country’s clean India campaign. However, the ‘nudge’ by the economic survey did not translate into serious policy action in the union budget.

And while the threat of climate change looms large on India, the budget speech failed to acknowledge it. In fact, after it was addressed in the first budget presented by Arun Jaitley in 2014-15, during Narendra Modi-led National Democratic Alliance (NDA) government, ‘climate change’ has not found space again in the four subsequent budget speeches (2015-16, 2016-17, 2017-18 and 2018-19) under the same government.

Climate change was mentioned during the interim budget on February 1, 2019, presented by the then finance minister Piyush Goyal, when he said, “India provided leadership to the global effort to address the problem of climate change.” However, by the time it came to the budget speech a few months later, the subject of climate change went missing.

Clean air and rivers not on the budget speech agenda

The economic survey 2018-19, which reviews the status of the economy, presented on July 4, 2019 had stressed that “the cleaning of rivers should be an integral part of clean India, along with coordinated activities between the Centre and the states such as treatment of industrial effluents, drain bio-remediation, river surface cleaning, rural sanitation, riverfront development, afforestation, and biodiversity conservation etc.”

The budget speech delivered a day after however, didn’t take forward these issues of cleaning of rivers and air pollution. From an environmental perspective, Sitharaman’s over two-hour-long speech was quite a departure from the interim budget 2019-20 presented by Piyush Goyal on February 1, 2019, where he had outlined a “vision for the decade.” In the “vision” the ten points included focus areas like “Pollution free India with green mother earth and blue skies” and “Water, water management, clean rivers”.

In her speech, while Sitharaman recounted those ten points for a vision for the decade, there was no specific addressal of air and river pollution.

The cleaning of river Ganga, which is considered a flagship programme of the Prime Minister Modi-led NDA government, also was not addressed in the union budget. The finance minister mentioned river Ganga and rivers in general in her speech was when she talked about developing inland waterways – a contentious issue which environmentalists stress would harm Ganga. 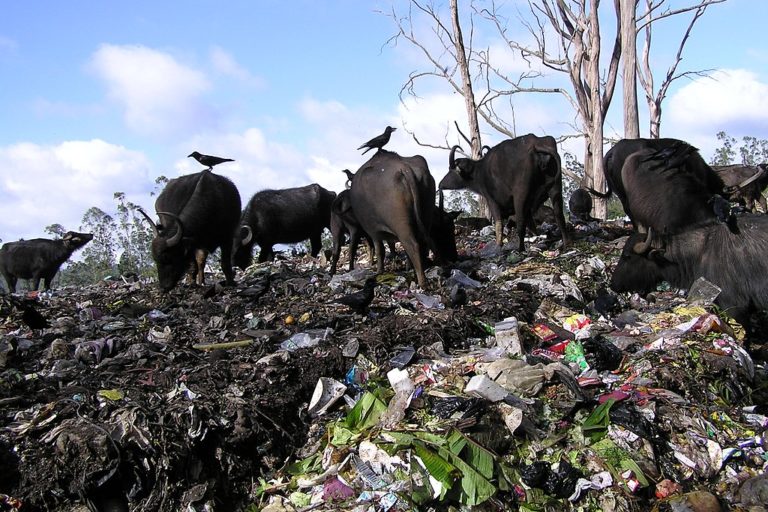 “We need to develop our inland waterways to shift a significant portion of inland cargo movement from road and rail. This government envisions using the rivers for cargo transportation, which will also help to decongest roads and railways. As part of the Jal Marg Vikas Project for enhancing the navigational capacity of Ganga, a multimodal terminal at Varanasi has become functional in November 2018 and two more such terminals at Sahibganj and Haldia and a navigational lock at Farakka would be completed in 2019-20. The movement of cargo volume on Ganga is estimated to increase by nearly four times in the next four years,” said Sitharaman in her speech.

Water scarcity was addressed in the budget with Sitharaman emphasising in her speech that “ensuring India’s water security and providing access to safe and adequate drinking water to all Indians is a priority of the Government.” She said that the Jal Shakti Mantralaya, formed after integrating the Union ministry of water resources, river development and Ganga rejuvenation and the ministry of drinking water and sanitation, will look at the management of our water resources and water supply in an integrated and holistic manner, and will work with states to ensure piped water supply to all rural households by 2024.

The budget speech was silent on pollution even though air pollution, over the past few years, has emerged as a major problem across the country. However, the documents providing ministry-wise allocation reveals that Rs 4.6 billion (Rs. 460 crore) has been allocated to the environment ministry for control of pollution which includes financial assistance to Pollution Control Boards/Committees, funding to the National Clean Air Programme (NCAP) and other programmes like the National Water Monitoring Programme, National Ambient Noise Monitoring Network etc.

“The Union budget has declared the intention of making Earth green and sky blue. This will be achieved through more afforestation and making cities pollution free,” Javadekar told reporters on July 9, 2019.

He explained that the increase in allocation is primarily due to the allocation made for control of pollution. “102 non-attainment cities are being targeted for controlling the pollution under the National Clean Air Programme. Of the 102 cities, 80 city-centric action plans are ready and the plans for the rest of 22 cities will be ready soon as well. These plans will be launched soon,” said Javadekar.

While the budget speech did not directly address air pollution, it, however, emphasised on encouraging electric vehicles. According to a senior official of the environment ministry, the large scale adoption of electric vehicles would certainly help in tackling pollution.

“It’s true that there is no direct reference to pollution (apart from the reiteration of the ten vision points) but one cannot say that issues of pollution are not being addressed. Take the importance given to electric vehicles for instance. The large scale adoption of electric vehicles will certainly help in tackling pollution,” said the environment ministry official.

In her budget speech, Sitharaman announced that they aim to “leapfrog and envision India as a global hub of manufacturing of electric vehicles (EV)” and said, “that inclusion of solar storage batteries and charging infrastructure in the above scheme will boost our efforts.”

But whether this is the most appropriate way to address air pollution is an ongoing debate. Agra-based paediatric surgeon Sanjay Kulshreshtha, who also identifies himself as an activist fighting against pollution from cars, told Mongabay-India, “Subsidy of hundreds of crores of rupees meant for electric cars should go for public transport or metro rather than electric cars. Such a huge subsidy can make bus/metro ride not only profitable but pollution-free as well. (Giving the benefit of) Rs 350,000 lakhs to one person and justifying hiking metro fare used by three million daily in Delhi is a cruel joke.” 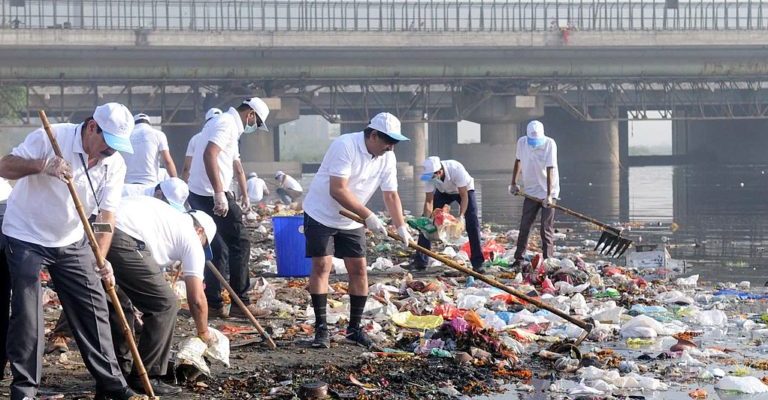 Pollution in rivers ails India but was not a focus area in the budget. Photo: Ministry of Water Resources/Wikimedia Commons

“In developed countries, despite the fact of being rich, the government provides a subsidy to public transport to the extent that it is free in many countries. On the contrary, our government is hesitant to discourage car owners and is giving a message ‘don’t leave your cars, just change it to electric car’. This is probably the government under pressure from the auto sector and not in a mood to face the wrath of car owners or adverse effects on the GDP. In India, the fundamental rights of sufferers are getting less importance as compared to democratic rights of car purchasers,” Kulshreshtha, who has been fighting several cases in the National Green Tribunal and the Supreme Court related to air pollution, told Mongabay-India.

Arunabha Ghosh, who is the CEO of the Council on Energy, Environment and Water, a not-for-profit policy research institution, noted that, “The ambitions for electric mobility and EV manufacturing are laudable but much would depend on how quickly the charging infrastructure is deployed and how easily the tax and loan interest benefits accrue to consumers,” said Ghosh in his reaction after the budget. He also stressed that “without deeper power sector reforms and continued focus on renewable energy deployment (surprisingly missing mention in the budget), the energy transition for India will not gain momentum.”

As pointed out by Ghosh, the budget speech also did not give significant attention to renewable energy (solar and wind power) – an issue championed by the NDA government, mainly Prime Minister Narendra Modi.

The budget speech noted that the government will support “private entrepreneurship in driving value-addition to farmers’ produce from the field and for those from allied activities, like Bamboo and timber from the hedges and for generating renewable energy.”

As far as solar power was concerned, the budget speech stressed that the government will use the approach of “mission LED bulb method to promote the use of solar stoves and battery chargers in the country.”

Rights of tribal people not on agenda

In the run up to India’s 2019 parliamentary elections, earlier this year, poor implementation of the Forest Rights Act 2006 and eviction of tribal people/forest dwellers from forests had gained a lot of traction.

On February 13, 2019, the Supreme Court of India had asked the state governments to evict the tribal people and other forest-dwellers whose claims under the FRA 2006 have been rejected. The order was later stayed by the Supreme Court. At that time, all the major political parties including the ruling Bharatiya Janata Party (BJP) and the main opposition, Congress, had promised to look into the issues concerned.

Now, the budget speech, gingerly touched upon tribal rights by mentioning the strengthening of a digital repository for preserving, “documents, folk songs, photos and videos regarding their evolution, place of origin, lifestyle, architecture, education level, traditional art, folk dances and other anthropological details of the tribes in India.”

“Every legislation needs to be backed up by a proper budget for it to be implemented properly. Similar is the case with the Forest Rights Act 2006 … the administration has no resources for tackling the issues associated with the FRA. Before elections, a lot of promises were made to ensure the protection of the rights of the tribal communities but it is not reflected in the budget. In fact, the budget (speech) was completely silent on the issue of ensuring the rights of the tribal people,” Abhay Xaxa of the National Campaign on Adivasi Rights told Mongabay-India.

He gave the example of the National Commission for the Scheduled Tribes and said the biggest problem with this institution is the lack of funds. “They regularly express that they do not have enough funds to follow up cases. The overall story of budget, as far as tribal issues are concerned, is that it is business as usual. Every year, the number (allocation of funds) changes but there is no focus on issues faced by tribal people,” said Xaxa.

This articles was published in Mongabay. Read the original here.