Chennai can never dream of clean air as long as it considers the city's edges – be it Ennore and Manali in the north or Alathur to the south – to be industrial sacrifice zones. 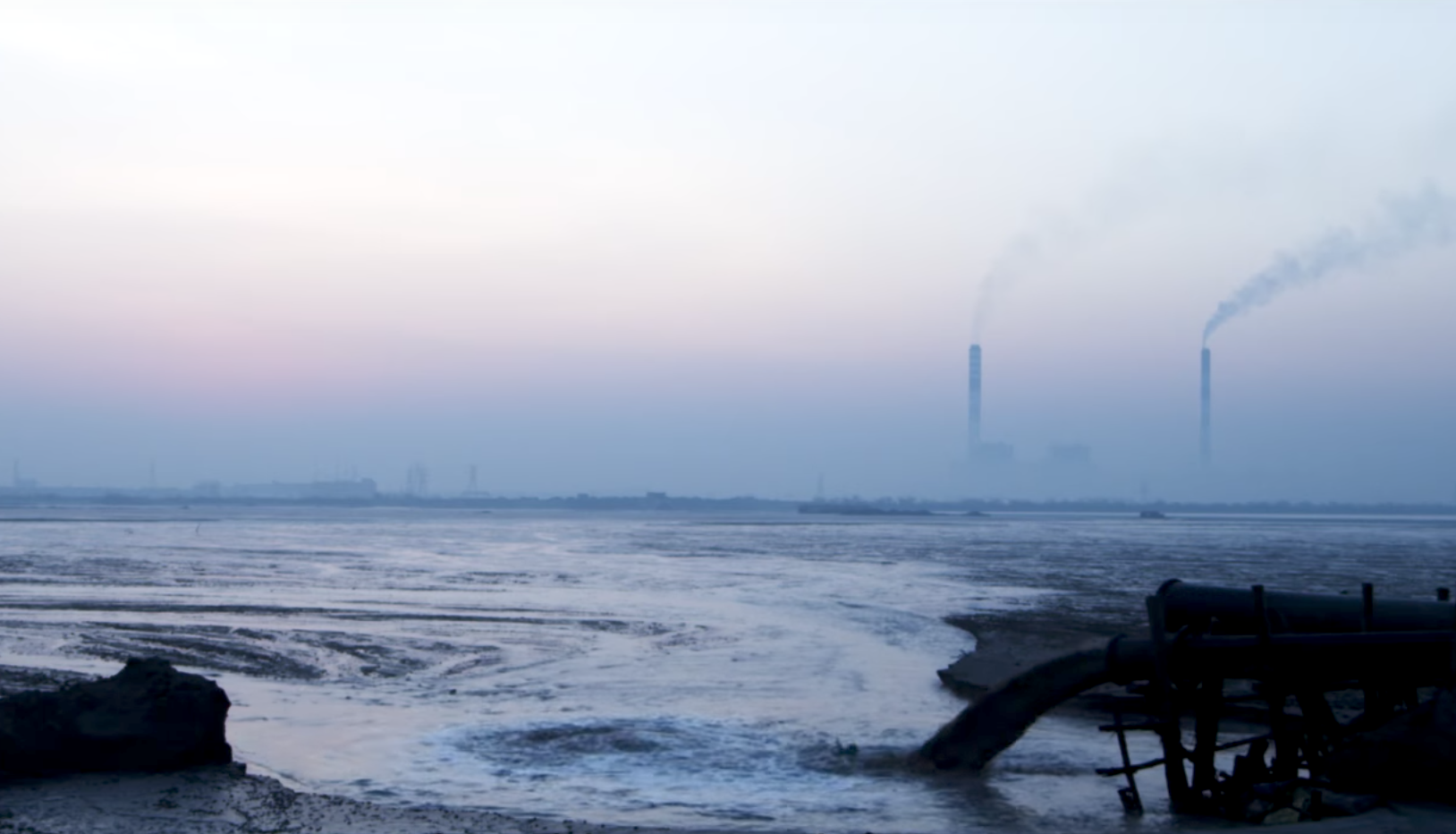 A view of the Seppakkam ash pond, with chimney stacks seen on the horizon. Source: YouTube

On 11 May, 2011, the Madras high court directed the Chennai port to stop handling dusty cargo like iron ore and coal. The court observed that the toxic dust from the cargo polluted the air and harmed the health of the resident population. It directed port authorities to instead divert the cargo to Ennore port about 20 km to the north, and observed that “the Right to Life with its extended meaning of including the right to clean environment was as sacrosanct as the citizens’ basic right.” Responding to the port’s claim that shifting of dusty cargo operations to Ennore would lead to unrest among port employees, the court also cited a dubious-sounding argument: a “well established principle of law [is] that the interest of society’s major sections should always prevail over that of small sections.”

In moving polluting activities out of sight of the society’s “major sections,” the court had knowingly or unknowingly followed the tradition of locating hazardous industries in places where the citizens’ right to life matters a little less than that of the major sections of society. North Chennai, of which Ennore is a part, is one such place. Ambattur, Alathur and the newly industrialising Sriperumbudur are the others.

From the time of its incorporation, Madras – a.k.a Chennai – has grown with discrimination as one of the central logics of planning. In the days of the British, when the waves of the bay licked the walls of Fort St. George, the urban native settlement north of the Cooum River’s exit to sea was called ‘Blacktown’. The working class population of Blacktown and the surrounding areas drove the economy that allowed the sahebs to live lives of luxury in the gardened bungalows of south and central Chennai.

The white rulers have left, but the proud Dravidian rulers have persisted with discriminatory traditions. Along the city’s edges – in Manali, Perambur, Ponneri, Alathur and Ambattur – a disproportionately high concentration of polluting industries has sprung up, especially in neighbourhoods with a higher than normal SC/ST population.

But this story of environmental discrimination has a twist to it. Chennai can never dream of clean air as long as it considers the city’s edges – be it Ennore and Manali in the north or Alathur to the south – to be industrial sacrifice zones. At least some of the pollution that was so carefully relegated to the edges is sailing right back to the centre, making Chennai’s air unbreathable.

In April 2017, volunteers from Coastal Resource Centre, an NGO program (that I advise), collected air samples from 11 locations in and around the Chennai metropolitan area. Nine samples were from the rooftops of working-class households in North Chennai and further in rural Thiruvallur. Two were from elite residential neighbourhoods in Central Chennai. They were analysed for PM2.5 levels. PM2.5 refers to dust particles that are less than 2.5 micrometres wide, about 30-times smaller than the width of a human hair. When it comes to dust, small is neither beautiful nor harmless. Loaded with neurotoxic and carcinogenic contaminants such as heavy metals and hydrocarbons, these fine particles penetrate deep into the pores of the lungs and can inflict serious, long-lasting damage.

Per the Indian standard, PM2.5 levels averaged over a year should not exceed 60 microgram/m3 (μg/m3). This standard itself is pathetically lax. The World Health Organisation prescribes an annual average standard of 10 μg/m3. For every 10 μg/m3 increase in PM2.5, mortality rates increase by 3-26%. Childhood asthma risk increases by 16%, lung cancer risk, by 36%, and heart attacks, by 44%. 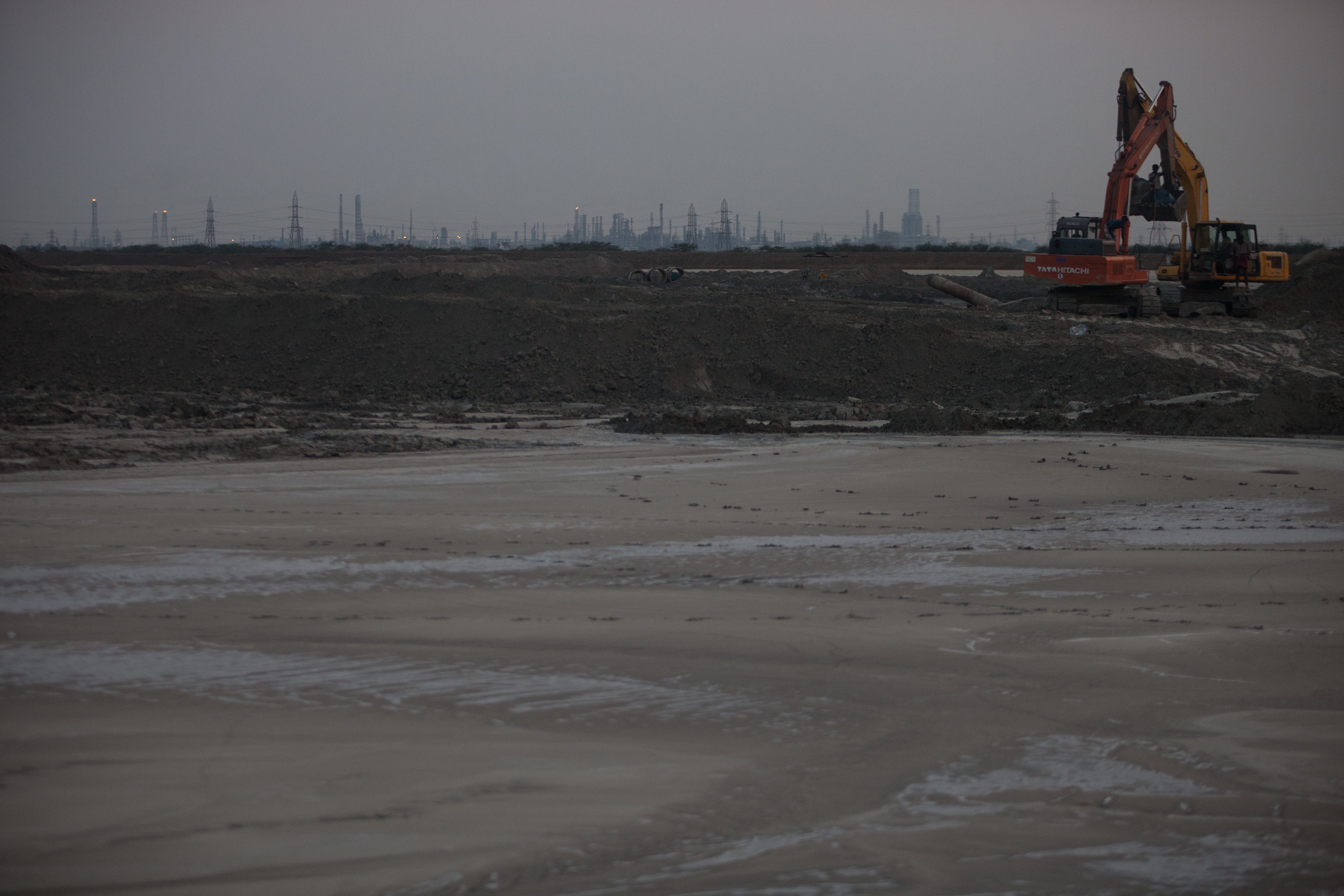 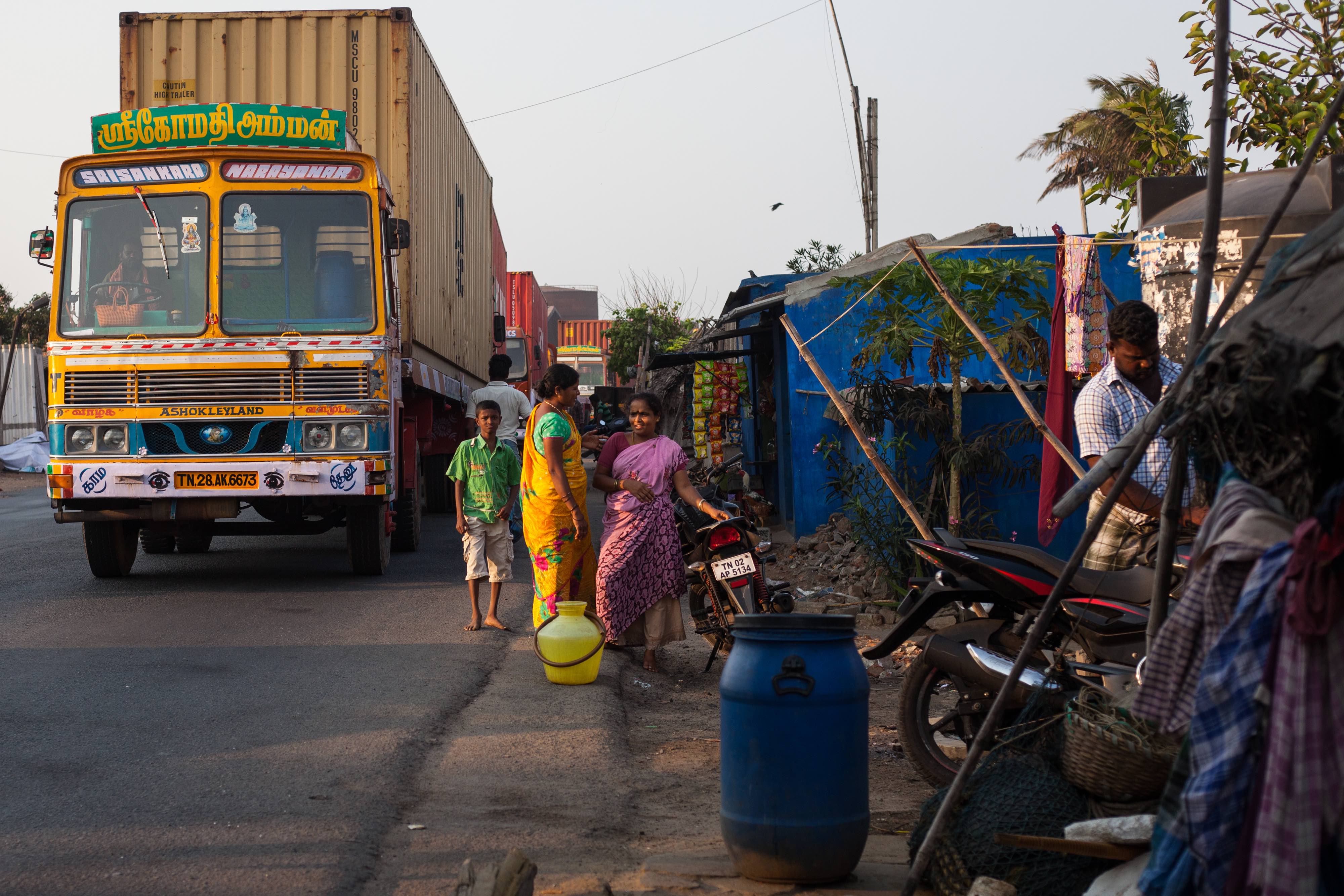 Residents of NTO Kuppam, Chennai, have tried to adapt to the increasing encroachment of heavy industry and traffic on their village. Credit: Greg McNevin, Unmask My City 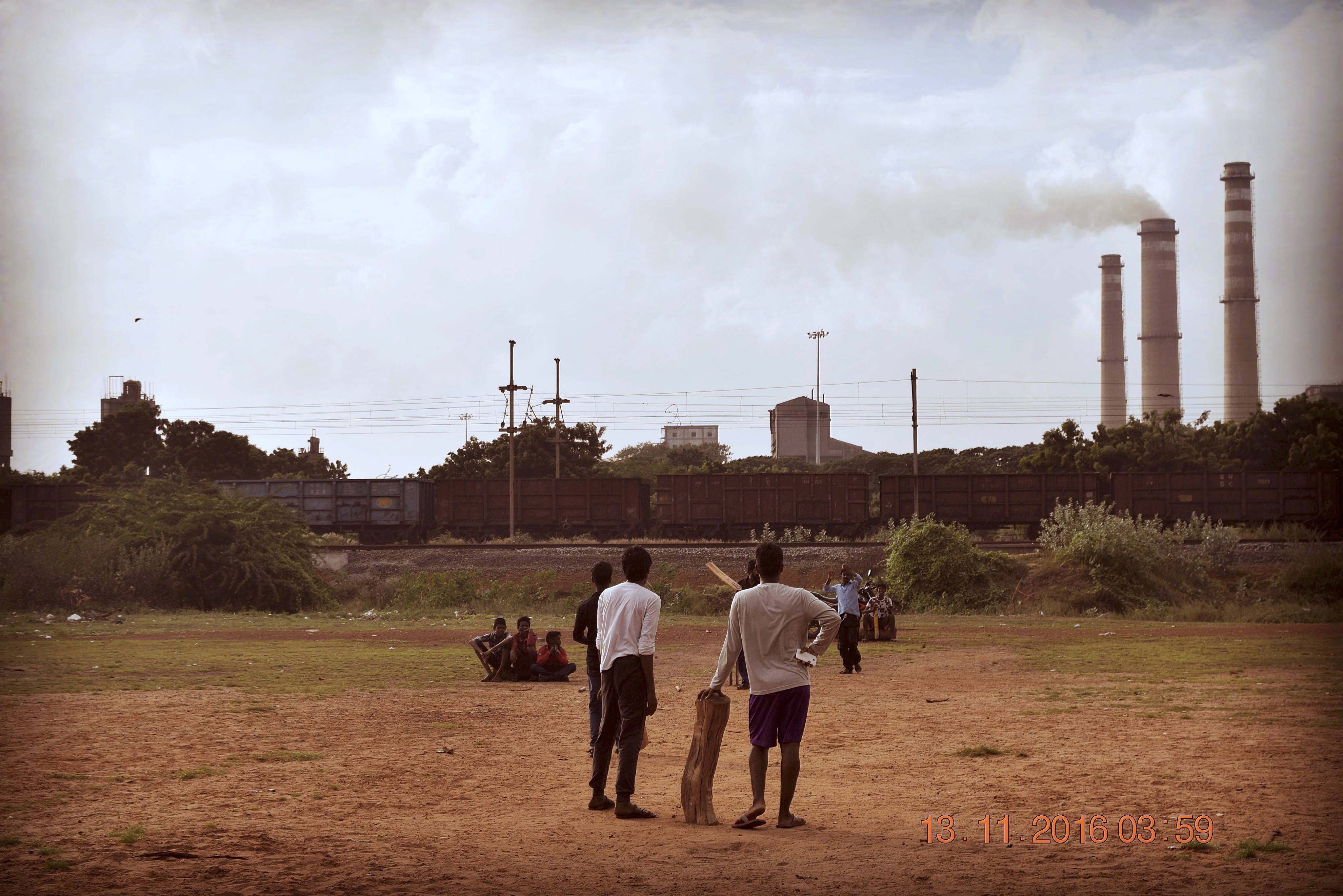 Air pollution harms lives and costs money. In a presentation on Chennai’s air quality, Sarath Guttikunda, an air pollution expert and founder of the group Urban Emissions, noted that the health-impact costs of air pollution for the city of Chennai alone may be up to Rs 1,960 crore a year.

Of all the Chennai samples, four of the worst were predictably from North Chennai. If Chennai were in Delhi, the sample results would have made national news. April 9, when the Central Pollution Control Board’s air pollution monitor in New Delhi’s ITO area registered a healthy 40 μg/m3, the fisherfolk residents of Nalla Thanni Odai Kuppam (NTO Kuppam) on Ennore expressway were filling their lungs with 220 ug of toxic particles for every cubic metre of air inhaled. That’s 5.5x.

In fact, the levels from the four locations are so high that if the samples had been taken in the US, that country’s Environmental Protection Agency would have issued an advisory asking the elderly, children and people with heart or lung diseases to avoid all physical activity.

NTO Kuppam is a repeat victim. The village was originally located on sprawling beaches that once spread to the east of the road that has now become the Ennore expressway. However, the beaches were eroded when the Chennai harbour was constructed. Now, the original NTO Kuppam – with its temples, community spaces and surveyed lands with title deeds – are all under more than 15 feet of water (due to sea advance).

In 2000, when the Kamarajar port was constructed further north in Ennore, the state government decided to convert the coastal road dividing what’s left of NTO Kuppam into a six-lane highway. NTO Kuppam was the only village that refused to move; its residents were afraid of losing access to the sea. So the six-lane expressway narrows to a two-lane road with houses on either side but well below the road’s level. In fact, an adult standing at the doorway would be at the exact same height as the exhaust pipes of the lorries carrying shipping containers that trundle slowly through the bottleneck.

The other worst-affected locations – Manali, Sivanpadai Kuppam and Kodungaiyur – are all hemmed in by heavy polluters. Manali has a sprawling petrochemical industrial estate. Kodungaiyur hosts the city’s largest garbage dump. Sivanpadai Kuppam lies in the shadow of three towering smokestacks in Ennore, belonging to the North Chennai Thermal Power Station (NCTPS), the Ennore Thermal Power Station and the NTECL power plant (the last located in Vallur).

The coal ash disgorged by the power plants are dumped in large ash ponds that sprawl over about 2,000 acres in two locations. Kuruvimedu (Tamil for ‘Sparrow Hill’) has no sparrows and is no longer the hillock it used to be. This entirely Dalit settlement, formerly peopled with salt-pan workers, was once the only high ground in the region. To the east, north and south of Sparrow Hill lay more than 1,500 acres of mangrove-fringed salt pans. To the west was about 50 acres of grazing commons, called meichakal poromboke in Tamil. Now, a power plant and coal-stack yard define the northern boundary of the village, and more than 600 acres of salt pans that the villagers used to work on are now a dump yard for the toxic coal ash from this plant. Needless to say, ash gets into every pore in their bodies, every flat surface and leaf and through every crevice in people’s homes.

NTECL’s and NCTPS’s environmental clearances require project authorities to develop a greenbelt around the ash dumps to an extent of at least 25% of the ash-handling area. But you will not find a single tree around either. The authorities know this but simply don’t do anything about it.

Samples taken from Seppakkam and Kuruvimedu returned with results that indicated the air quality was unhealthy. As it happens, it is easier to clean up the ash pond than it is to keep the children from playing cricket on the ash-tainted playgrounds.

“My village, which was pretty and healthy just 10 years ago, is now a graveyard of coal ash,” says N. Venkatesh, a contract worker from Kuruvimedu whose father worked as a boatman for the Central Salt Board. Now, both father and the salt trade are dead. NTECL, the NTPC-TANGEDCO joint venture which operates the plant, has neither done anything to curb pollution nor relocate the villagers to a healthier location. (TANGEDCO stands for Tamil Nadu Generation and Distribution Corporation.)

A twist in the tale

Horrible air quality where the poor and the politically marginalised live is par for the course of modern-day environmental discrimination. However, the results from the two samples taken from elite residential neighbourhoods of Central Chennai held a surprise.

One sample was taken from Poes Garden, from a rooftop a short distance away from the homes of superstar Rajinikanth and the former chief minister J. Jayalalithaa. The other was taken from Boat Club Road, an elite residential area housing Chennai’s billionaires, including Kalanithi Maran and India Cements MD and former BCCI chairman N. Srinivasan.

Including Poes Garden and Boat Club, all 11 samples taken in and around the city had elevated levels of iron, silica and calcium, suggesting that the combustion of coal in industrial or power plant boilers located in the margins may be blowing the poisons right back towards their planners’ noses. 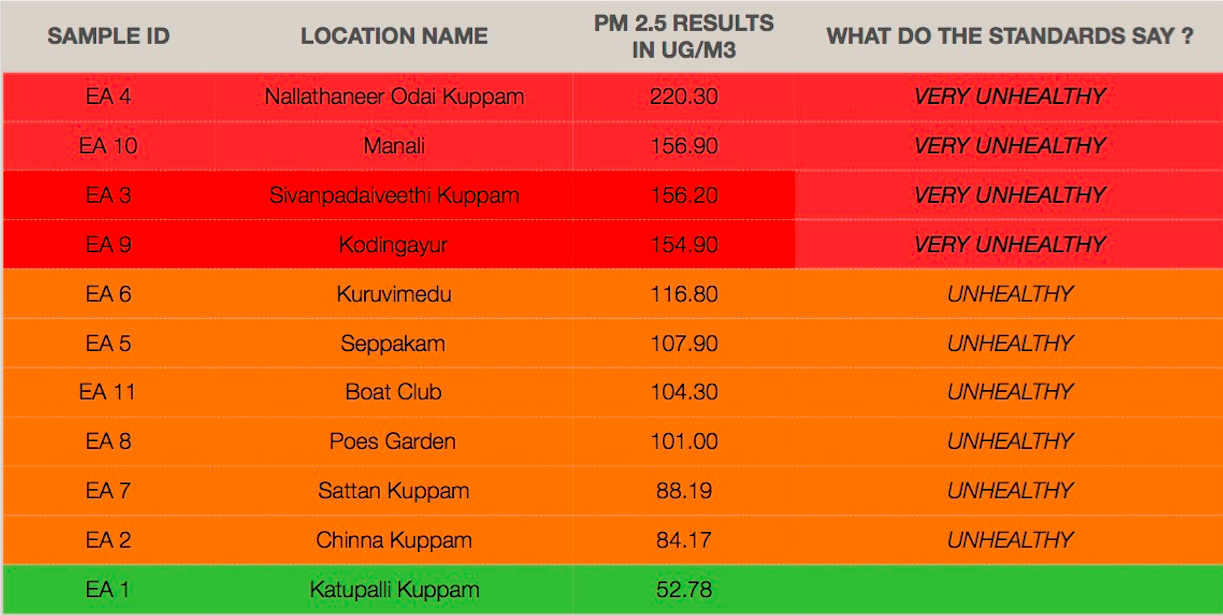 “There is a case to be made that emissions from coal ash dumps, thermal plants and industrial boilers may be getting resuspended to create regionally elevated levels or iron and calcium particulates in Chennai,” said Mark Chernaik, a staff scientist at the US-based NGO ELAW-US. Chernaik had interpreted the air sampling results at the behest of the Coastal Resource Centre.

At a press conference announcing the results, Hisamuddin Papa, a leading pulmonologist from the Chennai-based Huma Hospital, said, “The high concentration of polluting industries in the city’s northern and southern edges is affecting all of Chennai. The levels we see across the city suggest that we may be in the midst of a public health emergency. This emergency cannot be tackled as long as existing industries continue to emit pollutants in violation of norms, and more and more polluting industries are allowed to come up.”

The Ennore region alone already has an installed capacity of 3,330 MW of coal-fired thermal power plants. An additional 6,600 MW has been approved for this region. If the campaign of the Ennore fisherfolk calling for a moratorium on polluting industries fails, even the sea breeze from the Bay of Bengal will not be able to save Chennai from a fate worse than Beijing or New Delhi.