A video shows hundreds of men descending upon a herd of elephants every time they move out of the forest patches in search of food. 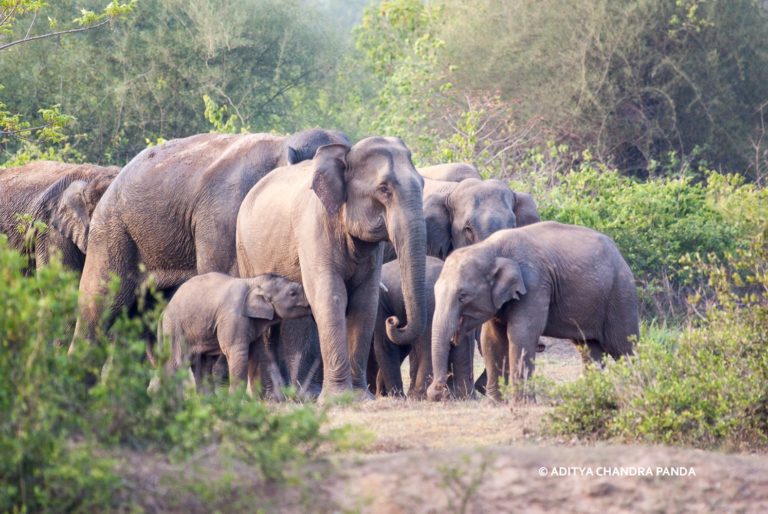 A video shows hundreds of men descending upon a herd of elephants every time they move out of the forest patches in search of food.

The Athgarh herd has about 25 elephants. Credit: Aditya Chandra Panda/Mongabay

A video shot by the NGO Sanctuary Nature Foundation shows hundreds of men descending upon the elephants nearly every time they move out of the forest patches in search of food. The men can be seen pelting stones, hurling abuses, and blocking the elephants’ path.

Trapped within slivers of forests amid a sea of dense human habitation in an area called Athgarh, the elephants are in constant state of conflict with the people living there. “This is why we call them giant refugees,” Aditya Chandra Panda, an Orissa-based wildlife conservationist said in a telephonic interview.

The Athgarh herd of about 25 elephants originally lived in the Chandaka-Dampara Wildlife Sanctuary, a protected area on the fringes of Orissa’s capital city Bhubaneshwar. Until 2001, the sanctuary was estimated to have about 90 elephants. An elephant census in 2014-15 estimated a population of eight elephants in the park. Now, there may be even fewer animals left.

Following years of habitat destruction and unrestrained expansion of cities into the forest, the elephants moved out in search of food, water and better wild spaces. Some herds made it to patches of forests elsewhere, plodding through once-contiguous corridors now broken by highways, industries, villages and towns. Some elephants were killed during the course of their journey, while others are now trapped within human-dominated landscapes.

The Athgarh herd, which arrived in the Athgarh area some five years ago, is one such “refugee” herd. Living in an agriculture-dominated area has meant that the animals are always at loggerhead with people. The elephants take shelter in some of the small forest patches during the day, and go out to look for food in the evenings, which mostly constitutes of crops, getting harassed in the process. Even in areas where there are no standing crops to protect, men come out in large numbers to block the elephants’ movements. Conservationists say that harassing elephants has now become a form of entertainment.

“I personally witnessed the horrific harassment of the herd in December 2016, and can say that it was a vile experience,” Cara Tejpal, a wildlife conservationist with Sanctuary Nature Foundation, who recorded the clash between villagers and elephants in December 2016, said in an email. “I watched these beautiful animals, so many little elephant calves included, being tormented for three hours that evening! And this is a routine that plays out regularly, week after week.”

Unfortunately, little is being done to resolve the conflict, Panda said. While the forest department keeps track of the movement of the elephant herd, trying to provide them with a safe passage, the local police has been inactive in controlling the mobs and keeping them away from the animals, he added.

To tackle the problem, Tejpal, Panda and their colleagues, with the Sanctuary Nature Foundation, have launched a public campaign to appeal to Orissa’s chief minister to come up with immediate solutions. The campaign uses the hashtag #GiantRefugees on social media.

One form of immediate solution would be for the police to intervene to allow safe passage of the elephants, Panda said.

Harassing elephants may have become a form of entertainment for the people, conservationists say. Credit: Karan Tejpal/Mongabay

“The Forest department has very accurate information about the movement of the elephants. Once this information is given to the police, the police should come well in advance and if needed impose section 144 [law prohibiting unlawful assembly of five or more people] in that area until the animals have been moved away safely, because this is a situation where both wildlife and human lives are at stake.”

The conservationists also seek long-term solutions. These include protecting Chandaka-Dampara Wildlife sanctuary and allowing its wildlife to recover, and reviving corridors and improving connectivity between Chandaka and Kapilas Wildlife Sanctuary and the Satkosia landscape in the state.

The situation in Athgarh is dire, conservationists say. Elephants have died in this conflict, and people, too, have been injured and killed. And the conflict needs to be resolved soon.

“What is happening in Athgarh and Chandaka is a very good example of what is happening all over India, where large forested landscapes are getting smaller, corridors are getting broken and wildlife populations are getting decimated,” Panda said. “We have been trying to get the chief minister of Orissa to issue a statement on this issue, about any plan of action they may have, but there’s been no response yet.”