Many Plans and No Action: Losing Lives and Livelihoods to a Polluted Dravyavati

Despite all the talk around river pollution, very little is being done to tackle or even monitor the poor quality of water in our rivers and the effluents flowing into them. 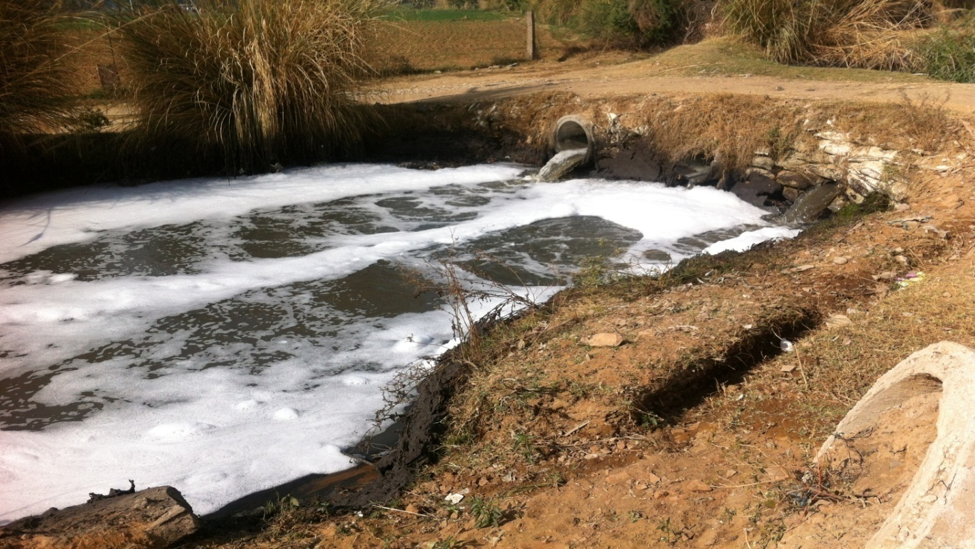 Effluents flowing into the Dravyavati in Sanganer. Credit: Shruti Jain Sanganer, Jaipur: For decades, the farmers in the Sanganer tehsil of Jaipur have been irrigating their fields from a feeder of the Dravyavati river containing toxic discharge from the Sanganeri print and dye industries located nearby. Some of them have installed pump sets near the feeder to fetch this water while others have laid underground pipelines. They believe that irrigating their fields with water containing the discharged effluents provides essential nutrients to the soil, which in turn enhance their yield. The vegetables grown with this water are visibly bigger in size.

Several petitions (Vijay Singh Punia vs Rajasthan State Pollution Control Board and P.N. Mandola vs State of Rajasthan) have been filed for the relocation of the unauthorised print and dye industries, but the activities carry on till date. Since 2015, when the Rajasthan high court ordered the pumps through which polluted water from the river is pumped out for irrigating be seized, the police audit the area once in a while to check the potential usage of this water and confiscate pump sets. But the farmers set them up again.

“I stopped farming after my father died of cancer. Consumption of the grains and vegetables grown on our farm with the toxic water caused the deadly disease. Mostly, the farmers of Sanganer don’t consume their yield but get food from other villages for household consumption. The vegetables and grains grown here are sold all over the Jaipur city,” said Babulal, a local farmer.

Dravyavati is not alone in the list of polluted rivers whose water is used for irrigation. According to the 2011 dataset of the Central Pollution Control Board’s National Water Quality Monitoring Programme on the water quality of rivers in India, the Ganga, Yamuna, Narmada, Godavari, Krishna, Cauvery, Mahanadi and Brahmaputra all fall below the class A (purest water) category, some even reaching class D. Biochemical Oxygen Demand (BOD), expressed in milligrams of oxygen consumed per litre of sample during five days of incubation at 20 degrees Celsius, is a measure of organic pollution of water. If it stands at above 3 mg/l, it tends to be sewage water. The Yamuna’s BOD level in the year 2011 varied from 0.2 mg/l to 41 mg/l, which is of even worse quality than class D. The Ganga’s BOD was in the range 0.2 mg/l to 11 mg/l and Godavari’s BOD was recorded between 0.0 mg/l and 37 mg/l. These BOD levels are a clear indicator of the extreme pollution prevailing in India’s rivers. The COCB water quality monitoring results between 1995 and 2011 indicate that organic and bacterial contamination continued to be critical in the water bodies due to untreated domestic wastewater discharge from the urban centres of the country. Lack of adequate water in the receiving water bodies for dilution has increased the oxygen demand and bacterial pollution. The analysis, therefore, shows gradual degradation in the quality of water.

The parameters set for the usage of water for drinking and irrigating vary substantially. Water for drinking must come under class A, whereas for irrigation water all the way to class E is permissible. When the fields are irrigated with contaminated water, inorganic forms of toxic effluents get absorbed by the plants. The polluted water used for agriculture also affects the soil, gradually making it unfit for cultivation.

The Environment (Protection) Rules, 1986 set a permissible limit of effluent discharge for each industry. Experts believe that this doesn’t suit India, as monsoon-dependent rivers have variable amounts of water around the year, sometimes even running dry. “These standards are based on the assumption that when the industry releases effluents complying with the industrial standards into a water body, there is sufficient water in that body to dilute the pollutants to the river standards,” asserts Dunu Roy, director of the Delhi-based NGO Hazards Centre.

The Central Ground Water Board, in its report, stated that the quality of groundwater has undergone changes to such an extent that the use of such water could be hazardous. An increase in the overall salinity of groundwater and the highly concentrated presence of fluoride, nitrate, iron, arsenic and a few toxic metal ions have been seen across India. High concentration of fluoride and arsenic in groundwater is a major health hazard. Arsenic leads to skin damage including keratosis and skin cancer, internal cancers such as of the lungs and bladder, and cardio-vascular diseases.

As per the Factories Act, industries are required to monitor their effluents and report on their quality to the State Pollution Control Board; who, in theory, is supposed to cross-check this data regularly with their lab before providing annual clearances to the industries. In practice, though, nothing of this sort happens.”River quality is monitored at specific points, generally where two streams meet each other or the river passes through major urban or industrial centre, by the CPCB if it is a part of a national monitoring system to establish the overall health of the river. There is no connection made between industrial effluents and state assessment of river quality by any agency, which leads to problems,” said Roy. Generally, the agency carries out the tests the after monsoon, when the sewage is diluted. There is no provision to monitor river water quality upstream and downstream of the point of effluent discharge. Even the application of Common Effluent Treatment Plant in the country is very limited and those in action faces inconsistency in compliance to the prescribed standards. Effluents flowing into the Dravyavati in Sanganer. Credit: Shruti Jain

According to a RTI filed to seek the status of water quality in the Sanganer region, particularly in villages using pump sets, the Rajasthan State Pollution Control Board (RSPCB) responded by stating that no test has been carried out in the past few years. Despite the region being under controversy over pollution for a long time, the RSPCB did not bother to monitor water quality. Recently, the Rajasthan government has given a contract to a consortium led by the Tata group and the Shanghai Urban Construction Group at the cost of Rs 1,676 crore for the rejuvenation of the Dravyavati river. The project, expected to be completed by October 2018, aims at river rehabilitation, sewage interception, treatment, disposal and value creation. For this, action against 50 industries polluting the river has been sought. “These actions against the industries are nothing new. Several (courses of) action were talked about in the past also but they were never strictly followed. There is an urgent requirement of a dual accountability so that the industries are obliged to declare their daily effluent discharge on their website, Facebook page and the government website, and announced in rural areas just the way Harsh Mandar, divisional commissioner of Bilaspur, Madhya Pradesh in 1997 forced polluting factories to tell the public the daily load of pollutants they pump into the air and water. In the present timeframe, public participation in issues relating to pollution and allocating clearance to industries is very critical. Every person has a right to eat clean vegetables and breathe clean air,” said Kavita Srivastava, People’s Union for Civil Liberties’ Rajasthan president.

Shruti Jain is a freelance journalist and a former student of the Indian Institute of Mass Communication, New Delhi.