“They are everywhere, in protected areas, in buffer zones, in sanctuaries and national parks – we are used to seeing them in the backdrop, and generally fail to recognise the threats they pose.” 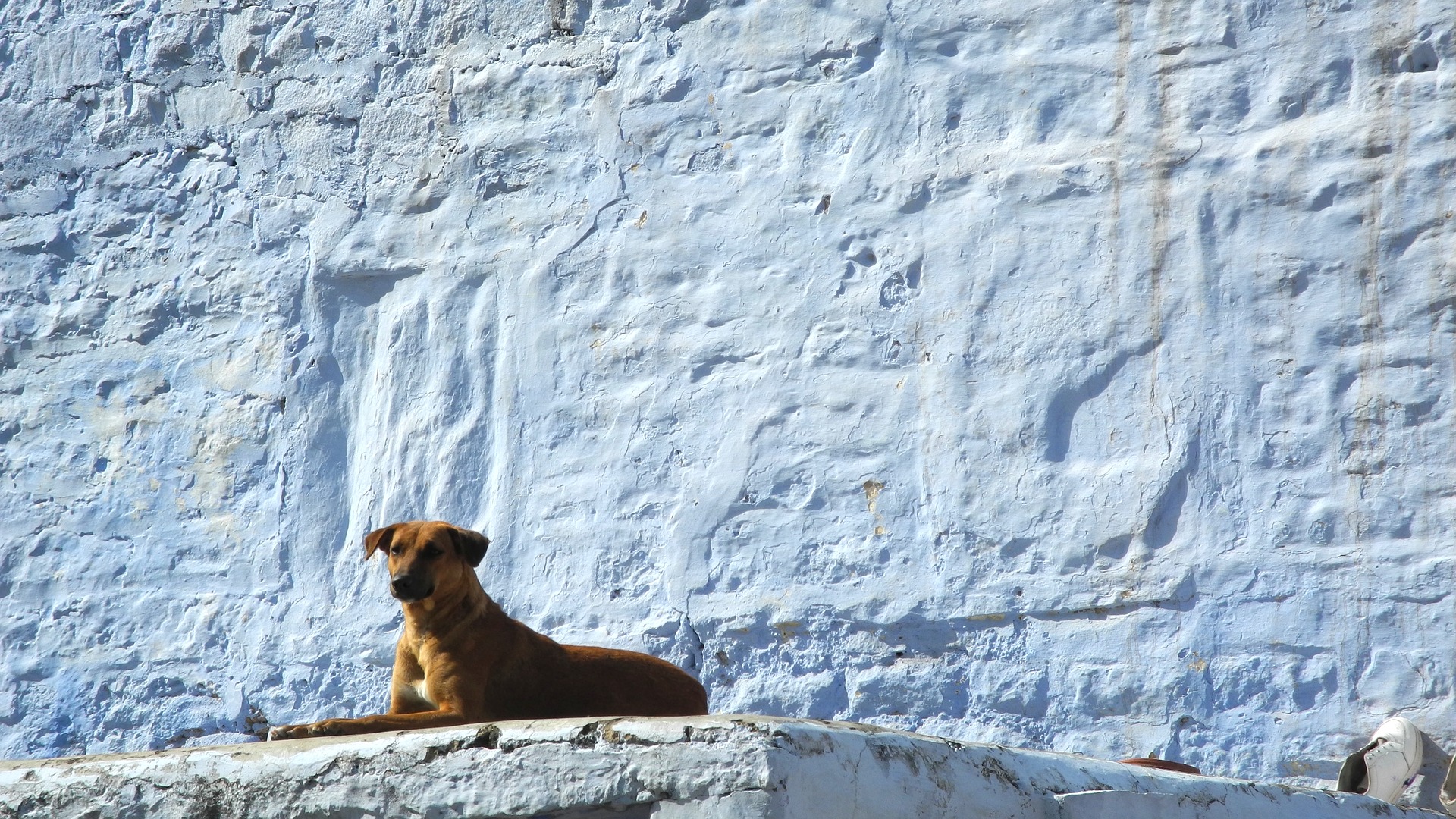 India has about 59 million free-ranging dogs, the highest in the world. It also has a large livestock population. Dogs killing livestock was always a problem just waiting to happen. Credot: schniewmatz/pixabay

Your neighbourhood pooch has an alternative avatar. When there is not enough food around, dogs can go hunting and bring down wildlife and livestock. In fact, they have been responsible for the extinction of 11 species and are a threat to about 170 other species of mammals and birds worldwide.

A new study to be published in the journal Biological Conservation has examined the number of species affected by dogs in the ‘red list’ of threatened species, compiled by the International Union for Conservation of Nature. Dogs seem to be a potential threat to 188 threatened species, of which 30 are critically endangered. This includes 96 mammals, 78 birds, 22 reptiles and three amphibians.

It was about 14,000 years ago that one of the most fruitful non-human associations began. Humans domesticated the dog. Over the next thousands of years, they have assumed a variety of roles: from best friend to helper to comrade in arms. Today, there are about a billion domesticated dogs around the world.

A domesticated dog also leads different lives depending on the country. In developed countries, they are confined to defined spaces – indoors or dog-play areas – by the owner. In the developing world, however, it’s not so simple. Apart from owned ones, there are also the ‘free-ranging’ variety – neighbourhood strays, not ‘possessed’ by anyone and that subsist on food from humans in the form of an occasional meal or scraps from garbage bins.

“It is difficult to quantify and compare [their] effects on sympatric wildlife due to predation, competition, disease transmission, etc.,” Aniruddha Belsare, a veterinarian and researcher at the University of Missouri, Columbia, wrote in an email. Sympatric wildlife is that which evolved from a common ancestor but lived within the same geographical region. “One of the main reasons,” Belsare continued, “is that dogs are aplenty and ubiquitous in most of the developing world, so much so that any such deleterious effects hide in plain sight. They are everywhere, in protected areas, in buffer zones, in sanctuaries and national parks – we are used to seeing them in the backdrop, and generally fail to recognise the threats they pose.”

Wildlife can be scared by their presence. They can harass and chase animals. This “is stressful” for the animal, according to Abi Tamim Vanak, from the Ashoka Trust for Research in Ecology and the Environment (ATREE) and one of the authors of the paper. “This chronic stress can lead to depressed reproduction and lower survival for prey.”

Canines compete with similarly sized animals for resources. In the dry grasslands of central India, for example, dogs vie for food with the Indian fox. Though the fox is an omnivore as well, it keeps away from human-derived food like crop residue and livestock carcasses, and preferred jungle berries, rodents and insects.

Disease spread could be another serious fallout of their cohabiting with wildlife. “Dog populations, by virtue of their association with humans, their large numbers and free-roaming behaviour, and human subsidies/protection, can be sources and sentinels of parasites or pathogens, of conservation or human health concern,” according to Belsare. “There is some awareness about dog-transmitted rabies but an abject ignorance about several other diseases where they play an important role – or could play in the future…”

In 1994, about a third of the lions at the Serengeti National Park in Tanzania died or disappeared. Researchers found that an epidemic of canine distemper virus started off in the local dog population and spread from them to lions, spotted hyenas and bat-eared foxes in the area.

Apart from these issues, predation is a very real danger. In fact, when the Biological Conservation study crunched numbers from the IUCN Red List, predation emerged as the most devastating effect canines had on wildlife. An infamous example is the fate of New Zealand’s kiwis. The small, flightless, ground-dwelling bird was easy prey. A 1988 study found that one wild dog killed 13 out of 23 kiwis fixed with transmitters. Researchers came up with a conservative estimate that dogs could have done away with 500 out of 900 birds in the Waitangi State Forest.

“The diversity of species that dogs can negatively impact reflects their generalist feeding behaviour since dogs will readily hunt and scavenge many types of food,” said Tim Doherty, a conservation ecologist at Deakin University, Australia, and an author of the Biological Conservation study.

Though dogs have been taxonomically classified under order carnivora (meat-eaters), they are omnivores. They eat everything from wild prey to carrion to human-derived foods; their teeth can chew threw all of them. They can also digest carbohydrates better than fellow carnivora like cats. This brings us to another item on the canine menu: livestock.

India has about 59 million free-ranging dogs, the highest in the world. It also has a large livestock population. Dogs killing livestock was always a problem just waiting to happen.

When free-ranging dogs get enough food from their human sources, they hang around settlements. When their food supply is cut off, they turn to wildlife or livestock. Which is what happened in the Upper Spiti area in Himachal Pradesh. A recent explosion of tourism in the area meant more food for the dogs during the tourist season. In the lean tourist season, however, the dogs couldn’t get enough food and seemed to turn to livestock and wildlife.

A team of researchers from ATREE and the Nature Conservation Foundation estimated dog populations in 25 villages across the landscape, counting more than 570. Most were concentrated around the two largest villages, Kaza and Rangrik. Through detailed surveys among villagers, the researchers estimated about 238 livestock deaths due to dogs over just one year. Free-ranging dogs have in fact seemed to have killed more livestock than the snow leopard or the wolf. Their findings were published in January 2017.

The Upper Spiti area in Himachal Pradesh is inhabited largely by pastoralists who maintain herds of sheep, goat, donkey, cattle, horse, yak and dzo, a cattle-yak hybrid. The area is also home to wildlife: herbivores like blue sheep and the ibex, and their predators like the snow leopard and the Tibetan wolf. Dogs seemed to target the smaller animals, sheep, goats and the occasional donkey. The authors heard accounts of dogs preying on blue sheep and woolly hare, apart from chasing ibex herds.

In Spiti, the livestock are an important source of income for the residents. Constant conflict with the dogs has been frustrating the residents. Vanak suggests having laws for responsible dog ownership, with proper identification for all owned dogs. “In rural areas, [dogs] will continue to be free-ranging, but if they are fed and well cared for, they are unlikely to create as much of a problem as free-ranging unowned dogs or semi-owned dogs. This is not as difficult as it sounds. Each panchayat can be empowered to take its own decision in this regard and form rules,” he said.

Another suggestion is to remove unowned dogs to shelters, which is illegal in India right now. The Animal Birth Control (Dogs) Rules, 2001, make it illegal for stray dogs to be removed.

“[Dog removal] is common practice in all developed countries. If animal welfare activists really care about these dogs, then they should put up the money for this,” said Vanak. “Keeping dogs on streets and feeding them on streets is neither compassionate nor responsible. It creates very poor welfare outcomes, for both dogs as well as humans.”