At the Deonar Dumping Ground in Mumbai, People Barely Make It to the Age of Forty

For the inhabitants of Deonar dumping ground, the nagging coughs, overflowing sewers, pungent air and billowing smoke are everyday realities.

Windows of various shanties in Dharavi, one of Asia's largest slums, are seen in Mumbai, January 28, 2015. Credit: Reuters/Danish Siddiqui

Manasi Dighe (name changed) rises before the sun, changes into a sari, plaits her thinning hair, and sets out. At the crack of dawn, her eyes begin searching the road, hoping to find plastic, metal or glass items which, at Rs 20 a kilo, could earn her Rs 100 in a day. Manasi covers 20 to 30 kilometres daily, when barely a kilometre from her Bhim Nagar hut in Mankhurd, an eastern suburb of Mumbai, is Asia’s largest dumping ground – the Deonar landfill.

Mumbai’s 12.4 million citizens send 9,000 metric tonnes of waste to this 134-hectare dumping ground every day. If one corner of the city wasn’t piling up this junk to a height of nearly 18-20 floors, it could accommodate almost 268 football fields or 30% of the Bandra-Kurla Complex business district. This waste is unsegregated and some slum communities scavenge for recyclable materials in it. But not Manasi.

The Deonar dumping ground often makes news, especially when the waste decomposes and the emitting methane gas catches fire, or when the municipal corporation announces something outrageous, such as inviting tenders for herbal deodorants to mask the landfill’s stink. But to those living around, the nagging coughs, overflowing sewers, pungent air, or smoke billowing into their houses are not changing headlines, but persistent truths.

Living with the litter

Nearby educational institutions like the Tata Institute of Social Sciences (TISS) and non-governmental organisations have continued to raise a stink about the living conditions in this region. “The life expectancy of people still hovers at 39 (as against an urban life expectancy of 73.5 in Maharashtra)”, said Chandrika Rao, Director, Citizenship and Advocacy with NGO Apnalaya. 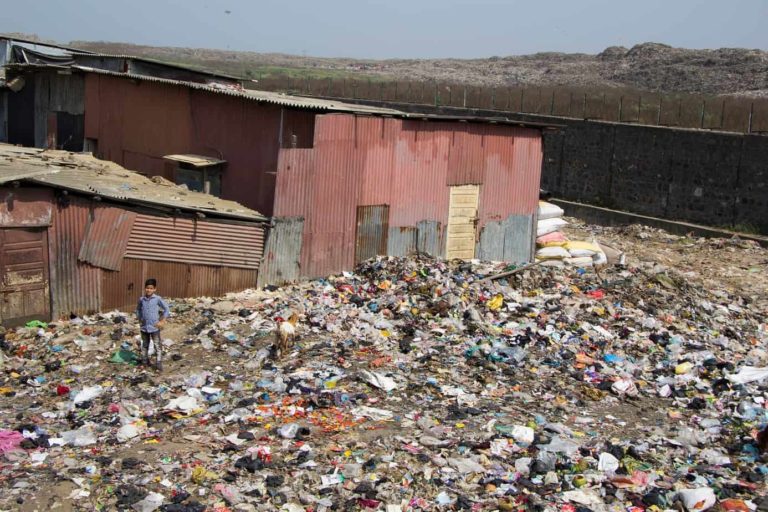 Life amid litter at Deonar in Mumbai. Around 9000 metric tonnes of Mumbai’s waste goes to the dumping ground every day. Credit: Apnalaya, Mumbai.

Those who can, have voted in numerous municipal, assembly and Lok Sabha elections but without the hope that their vote would change the reality around them. A resident, unwilling to be named, said, “We don’t think the elections will change anything. The garbage will continue to come here. At best, we can move.”

The cynicism is understandable as historically, authorities have indulged in a game of accusations, not resolution. In March 2016, weeks after a raging fire at the dump site, Maharashtra Environment Minister and senior Shiv Sena leader Ramdas Kadam alleged that it was the “handiwork” of the Bharatiya Janta Party (BJP) and that the party was trying to gain political mileage out of the issue in the run-up to the civic polls. Arvind Sawant, Shiv Sena’s Member of Parliament (MP), supported his claim.

Thereafter, Congress President Rahul Gandhi visited the site but it turned out to be just another opportunity to take on the opposition. Despite the concern demonstrated by these politicians, one year later, the situation on the ground remained unchanged. A member of the High Court-appointed Committee himself affirmed that no significant measures had been taken to improve the condition of the city’s largest landfill.

“In 1927, Mumbai started to send its waste, previously deposited in Kurla, to the outskirts of the city in Deonar,” Dewoolkar said. But as the city spread and land prices increased, the region saw a remarkable shift. “Oil refineries, fertiliser plants and resulting employee quarters came up. The railway line was extended, highways constructed, slum dwellers from the island city rehabilitated and further ahead, the satellite town of Navi Mumbai was planned, pitched and executed.”

All along, the dumping ground remained a fixture in the background and ensured lower living costs. Thus, the slums around the dumping ground quietly mushroomed till, in 2011, they took over Dharavi as the largest slum pockets in Asia. 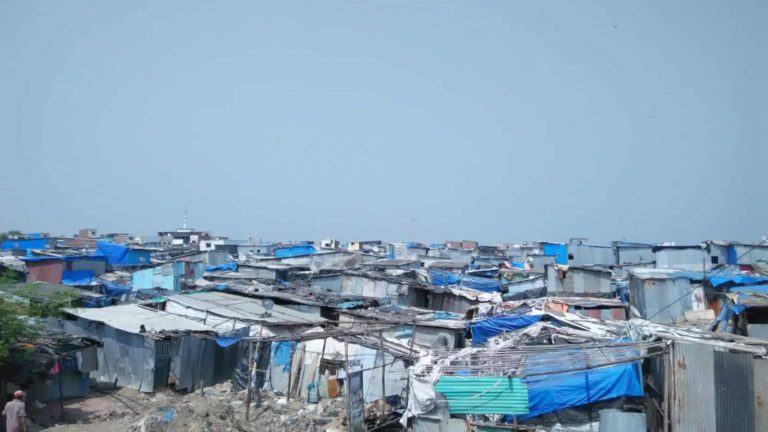 The life expectancy of people living around Deonar dumping ground hovers at around 39 years. The urban life expectancy in Maharashtra is 73.5 years. Credit: Apnalaya, Mumbai.

“The slums around the dumping ground, so far, offer the cheapest living options in Mumbai,” said Debartha Banerjee, Director, Sampurna(e)arth Environment Solutions. Many migrants, especially Dalits and Muslims, therefore, move into these slums, where a 6X6 room could cost Rs 500-1000, and become ragpickers to earn a living. Often underage and exploited by those who’ve risen up the ranks, these ragpickers ignore severe health concerns as they venture into the dumping ground to bring back recyclable material. But, “if it wasn’t for them,” Banerjee points out, “we would have run out of space to dump our waste long ago.”

Still, it’s the paucity of space that’s making the Brihanmumbai Municipal Corporation(BMC) hunt for more land outside the city. “Historically”, Banerjee continues, “waste has been treated as collection and transportation business in Mumbai.” But at a time when each administrative ward in the city generates more waste than some cities, lifting garbage from each house and depositing it in a landfill is unreasonable and a range of solutions are essential.

Segregating and processing waste at source and stopping it from reaching the landfill is a well-known solution. A recent IIT study went a step further and discussed a range of alternative approaches such as composting, anaerobic digestion and landfill dumping, where waste would be later processed. But the city’s mounting waste problem is not a lack of innovation, but rather, a lack of implementation.

The civic body, for instance, has asked housing societies to segregate their waste but little has been done to enforce the rule. “In the absence of incentives such as property rebates or tax benefits, it’s natural for societies to be resistant in spending their own money in segregating and processing wet waste,” Banerjee concedes.

Also Read: When it Comes to Urban Planning, India Suffers From a Poverty of Imagination

Who will bell the cat?

India might require mass education drives to be convinced of the need for segregation, but the elephant in the room continues to be what municipal corporations do with their powers and budgets. Activists hint at vested interests when BMC keeps hunting for newer sites to dump waste and allots a significant amount to transportation.

“It’s just not feasible,” Jyoti Mhapsekar, founder member of Stree Mukti Sanghatana, an organisation that works with ragpickers, said. “Till when will some other city take Mumbai’s waste? And the transportation cost will be so high that sooner or later, only decentralised processing will be an option.” Mhapsekar also suggests that ragpickers should be integrated at these decentralised processing centres.

Each year, the BMC budget announces ambitious plans to change the face of waste management in the city, each year it fails. This year too, Rs 100 crore has been announced for the long-touted waste-to-energy plant at the dumping ground. Mumbai’s development plan, too, marks certain areas as waste-processing centres, but if the past is any proof, these plans are mired in bureaucratic hassles and end up existing only on paper.

“For Mumbai to be able to manage its waste problem, a lot of things need to happen at once,” Banerjee said. “Segregation, decentralised waste processing, only allowing unprocessed waste to reach the dumping ground which would then be processed without polluting the environment.” But in the same breath, Banerjee concludes that these steps are nearly impossible without the presence of a strong leadership.

Lack of political will

Around the world, strong leadership is associated with an elected mayor or an empowered representative. Mumbai has neither and is dependent on how willing the Assistant Municipal Commissioners or the ward officers are. “The councillors (the city’s elected representatives) can take up issues in the standing committee meetings,” Dewoolkar said, “but their powers are limited.”

Rakhi Harishchandra Jadhav, an area councillor, believes that it’s the councillors who know and understand their wards but they still aren’t empowered enough to play a significant role in the ideation or implementation of any proposal or plan. “The solid waste management department is a failure,” she said, “and the elected representative, the councillor, has been reduced to someone who merely asks questions and complains to the municipal corporation.”

Regardless of the limited powers, the councillors are closest to the population but seem to be unable to provide any comprehensive solutions to their electorate. In fact, contrary to Jadhav’s claims, Praja Foundation, a non-profit organisation, finds that the councillors in the M-east ward have performed poorly and not achieved even what comes easily: raising issues or asking questions about the pressing issues in their ward.

Also Read: What the Last Five Years of Urban Policies Reveal About Our Cities

One of M-east ward’s MLA is Samajwadi Party’s Abu Asim Azmiis not known for his work in his constituency. The current BJP MP, Kirit Somaiya, might have called out the corruption in BMC’s handling of solid waste but has been unsuccessful in bringing about any change either.

Somaiya is now replaced by Manoj Kotak as the BJP nominee for Mumbai north-east, who has already promised that, “if elected, I will make sure that Deonar dumping ground is closed down”. Residents of M-east ward however are likely to understand it as one more extravagant promise, especially as the Bombay High Court has already allowed dumping of waste on the ground till December 31, 2019—one of several extensions granted over the last few years.

Mumbai’s tenuous problem of waste, or the neglect of regions hanging on its periphery, is an example of diffused responsibility. When everyone is responsible, no one is responsible. And so, even citizens are not free of the blame. 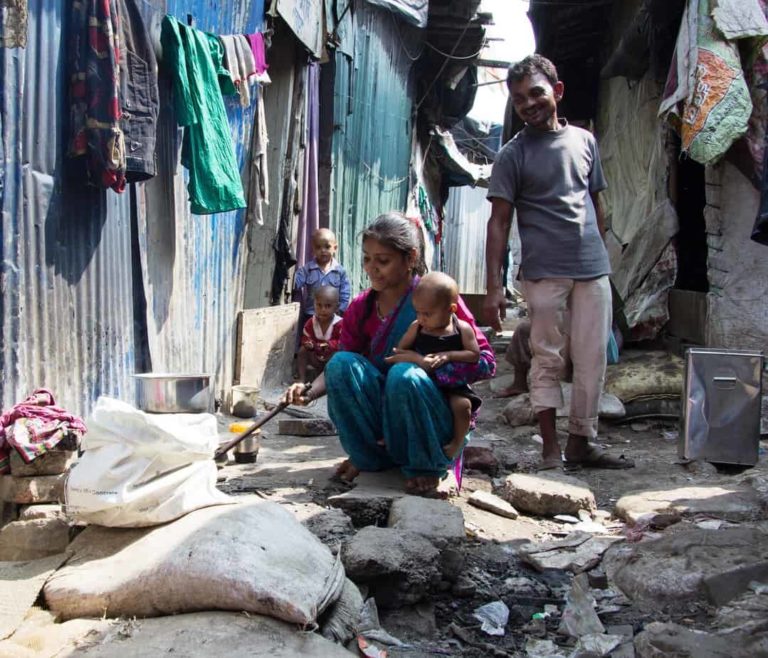 The slums around the dumping ground, so far, offer the cheapest living options in Mumbai. Credit: Apnalaya, Mumbai.

“While it’s important for BMC to coordinate with elected representatives and expedite projects,” Mhapsekar said, “it’s equally important to take a larger view of waste management which involves support from each citizen. The prevailing attitude is ‘not in my backyard,’ but Deonar is the city’s backyard. The smoke from the backyard doesn’t stay in the ground, it spreads everywhere.” In the 2016 fire, for instance, the smoke spread enough for the air quality index ( (10 kms from the dumping ground) to reach 322, indicating ‘hazardous’ levels of pollution.

For ragpickers like Manasi, however, the choice lies between poor health and death by starvation. “I am not concerned about my health,” she said. Apnalaya’s Rao summarises the situation with a particularly sobering thought: “The fact that so many are willing to live and work in a dumping ground is a testament to what they’ve left behind. If they think this is acceptable or even better, then the question is, what have they left behind?”

This story was originally co-published by Citizen Matters and Mongabay, and has been republished here with permission.