Dammed and Mined, Narmada River Can No Longer Support Her People

The dams and rampant mining of sand from the foreshore and riverbed of the Narmada have caused significant damage to the riverine ecology, affecting livelihoods of people living in the river valley. 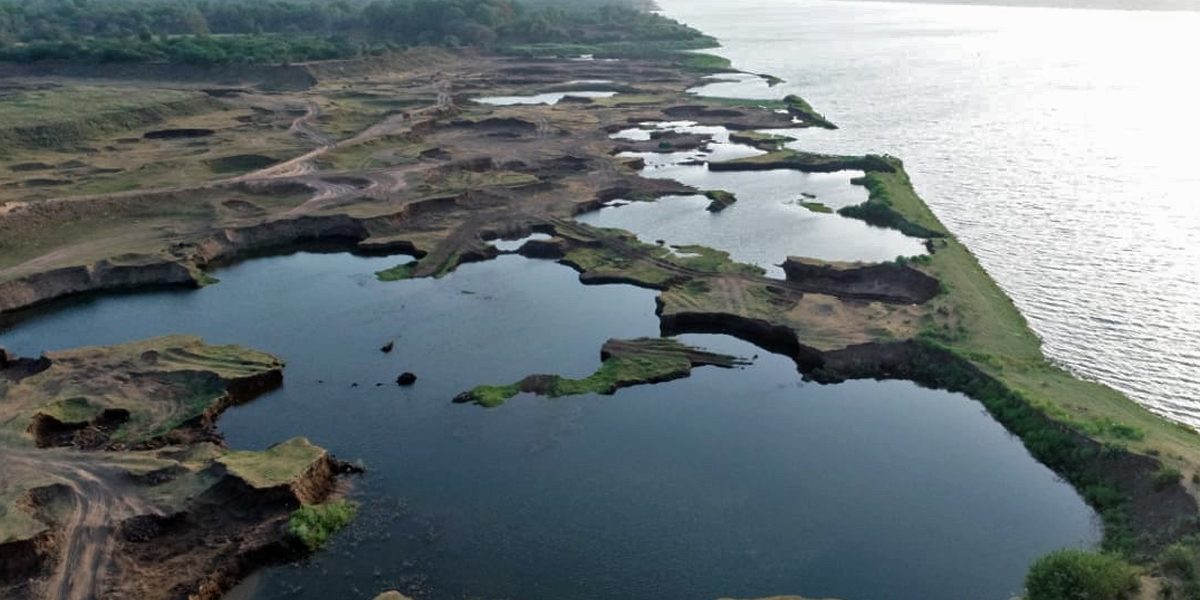 For sexagenarian Madoo Bhai, the world has changed beyond recognition since he was a child. He has spent his life in Chikhalda, a small village along the banks of Narmada River in Dhar district of Madhya Pradesh in central India.

“There was a time when both sides of the river was full of muskmelon plants, and I would go with my father to sell the fruit in the market,” he remembered. “Nature gave us enough.”

Those days, he regrets, are long past. Now the people of Chikhalda struggle to make ends meet. The story is repeated in village after village along the Narmada, the longest west flowing river in India that has been in the national and global limelight due to the building of the massive Sardar Sarovar Dam project despite sustained protests by residents of the river basin.

The travails of villagers in Chikhalda started long before the Sardar Sarovar Dam was built. In 1974, construction of the Bargi Dam started on the Narmada River, some 650 km upstream of Chikhalda. The dam was commissioned, after many delays, in 1990, and spelt trouble for communities living downstream in the Narmada valley. 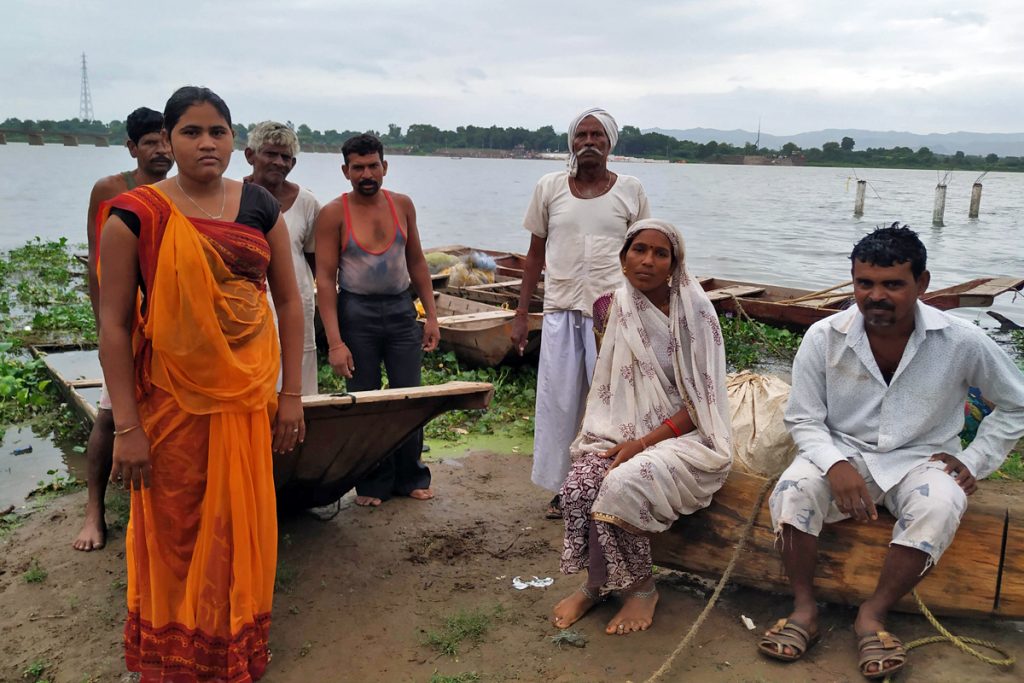 The farmer-turned-fishing community along the Narmada river in Dhar district in Madhya Pradesh face a threat to their livelihood due to the damage caused to the river by the dam, sand mining, and pollution. Photo: Hridayesh Joshi

“First, the Bargi Dam was constructed, and that caused a lot of flooding. Bargi’s water would submerge our (muskmelon) crop again and again, and we were not compensated (by the government) for the losses,” said Madoo Bhai. “We kept on suffering.”

By 2008-09, most of the fruit growers in Chikhalda had taking to fishing in the river for a livelihood. But pollution and damage to the riverine ecology did not spare their new livelihood either. Farmers, who had turned fishermen, now find it difficult to catch fish in the river.

“When the water was flowing, the river had a life and it abounded in fish. Now, because of stagnant water, (fish) breeding is low,” said 65-year-old Saba, who quit farming 15 years ago to take up fishing. “For us, it is nearly impossible to survive on fishing.”

Stagnation of the free flowing river and rampant sand mining has deteriorated the riverine ecology, aquatic life and prospects of agriculture in the stretch of the Narmada valley in Dhar and Barwani districts of Madhya Pradesh. Many fishermen have become daily labourers in the Barwani town to stay afloat financially.

In Pichodi village, a few kilometers away from Barwani town, 63-year-old farmer Salagram shows large patches of dug up land on the Narmada’s foreshore. A landscape once rich with the crops of cotton, wheat, banana and papaya now has a devastated torn look, due to relentless and illegal sand mining.

“This was our land where our homes were situated and our culture thrived, but when they ruined Narmada, everything fell apart,” said Salagram, whose family still lives in this area, which has been declared a submergence zone of Sardar Sarovar Dam. Today, his life is dependent on smallholder farming and fishing.

The Sardar Sarovar Dam, some 150 km downstream of Barwani, is among the 30 large dams proposed in Narmada Valley. With a total installed power generation capacity of 1450 MW, it is the third-highest concrete dam in India after Bhakhra Nangal in Himachal Pradesh and Lakhwar hydropower project in Uttar Pradesh. 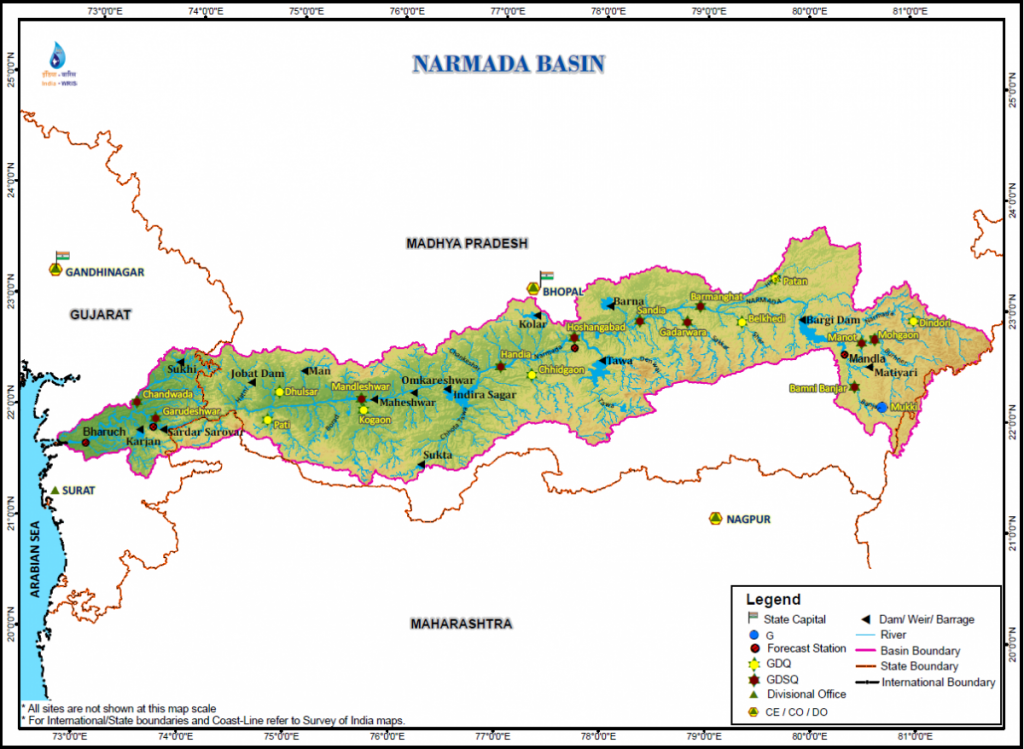 Originating at Amarkantak in Madhya Pradesh, Narmada River flows through Maharashtra and Gujarat before it meets Arabian Sea on the west coast. The river basin is spread over 97,410 sq. km, comprising 85,858 sq. km in Madhya Pradesh, 1658 sq. km in Maharashtra and 9894 sq. km in Gujarat. The drainage area up to Sardar Sarovar dam site is 88,000 sq. km, official data show. The river basin is massively dammed with 30 major projects, some of which are already operational.

The Sardar Sarovar project is now functional, but 30,000 families are still living in its submergence zone in the four districts of Khargaon, Badwani, Dhar and Alirajpur. For many of these families, fishing is a means of survival, but silting, industrial pollution and sand mining has become a curse for them.

When a dam is built, a large area becomes a lake to hold the impounded water. Besides this, long stretches of the foreshore of the river are declared as submergence zones as the river floods these areas for a few months every year during and after the rainy season, when the flow of water is high. A villager points to land on the banks of the Narmada which was once rich with different crops before it was dug for sand mining. Photo: Hridayesh Joshi

Energy expert and environmentalist Soumya Dutta, a member of the Advisory Board of United Nations Climate Technology Center, explained how mining sand from the riverbed affects the life of aquatic species and can snatch away the livelihoods of fishermen.

“Sand, stones and boulders are required to slow down the rate of flow of any stream, so that the riverbed is recharged. Otherwise, all the water will flush away and, as a result, the aquifer won’t get time for recharging,” said Dutta. “So even if you see a lot of water in the river in the rainy season, as soon as the rain stops, there is no water in the ground and that will affect the life of fish in the river.”

This is what is killing the river upstream of the Sardar Sarovar Dam, where the small fisherman like Madoo and Saba go fishing.

Interestingly, the government gives fishing contracts to big contractors in the reservoirs of these dams, but does not care about the life of the river upstream or downstream of any dam, where the riverine fishers eke out a living.

About 50% of the fisher population in the Narmada basin depend on the river and estuary of the basin, according to experts. Whereas the reservoirs are leased to contractors, the flowing river is free for the fishers. But, continuous mining and holding of water by dams are big problems, which the locals allege is killing many fish species. 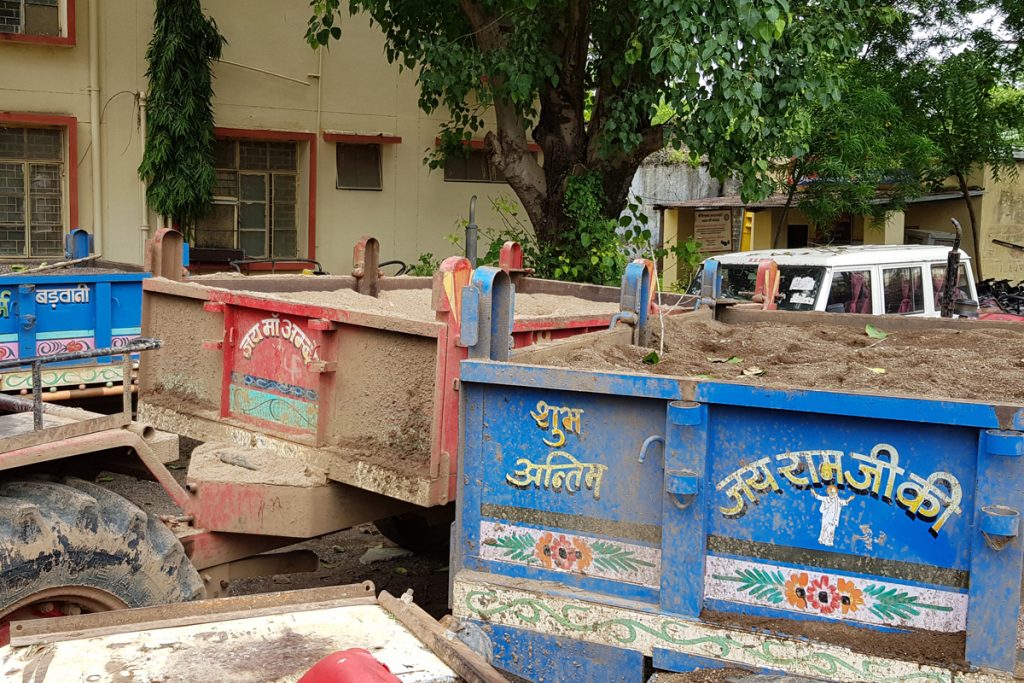 Trucks with sand impounded by authorities. Despite the orders by the high court and National Green Tribunal, illegal mining continues in the Narmada Valley. Photo: Hridayesh Joshi

“The estuary of Narmada is extremely productive, particularly for Hilsa, but right now the hilsa fisheries has taken a hit, as nearly 60% of its production is down because there is no water is available there,” said river expert Parineeta Dandekar, Associate Coordinator, South Asia Network on Dams, Rivers and People (SANDRP), who has been researching on the Narmada valley for many years. “Hilsa needs a mix of saline and fresh water for breeding. Because we are holding all the water of river, no fresh water is coming down and fish can’t go up.” The estuary is downstream of the Sardar Sarovar Dam.

Likewise, the famous Mahseer is also disappearing from many parts of Narmada. At Rajghat Kukra village, at the district border between Dhar and Badwani in Madhya Pradesh, 50-year-old Rajaram said that now he drives an auto-rickshaw to earn his living instead of fishing.

“Hundreds of families were dependent on fishing here, but we hardly get any fish in the river now. It’s not more than one or two kg in a day. That isn’t sufficient to support a family,” said Rajaram. “So everyone is looking for other means of livelihood.”

India is ranked second in inland fish production. More than 10 million people dependon sources like rivers, wetlands and ponds, and for the rural poor, a free flowing river is a lifeline. Experts say if small fishermen quit fishing, it also threatens the life of the river. “River fisherfolk are the best mascots of the health of the river because their livelihood is actually is related to how healthy is river is,” said Dandekar. 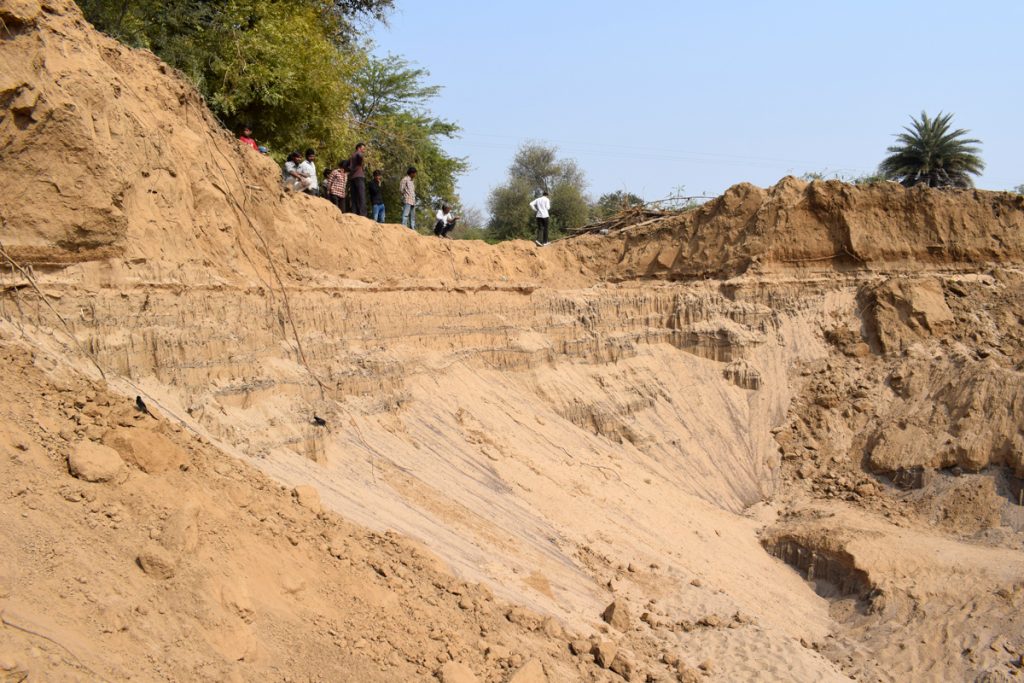 Excessive sand mining at the banks of Narmada has destroyed the river bed and catchment area, affecting the fish population. Photo: Hridayesh Joshi

Sand mining brings with it another problem. While extracting the sand, miners throw all thorny bushes and shrubs that grow on the banks of the river, along with an enormous amount of mud, in the water of Narmada. This causes heavy siltation and damages the nets of fishermen.

“We face a lot of problems due to the mud and shrubs thrown in Narmada. Our nets get stuck in it and we suffer huge losses,” said 40-year-old Madhu. “This is unbearable for us.”

However, this claim of fishers is refuted by government officials. “I don’t see a direct impact of mining on fishing because whatever little mining is being done, though it is illegal, that is done at the banks of river,” said Barwani’s district collector Amit Tomar. “When the water (of the river) recedes, it leaves sand at its banks and they dig that area.”

“We do not have many complaints about this. If someone comes to us (with complaints), we will have a look at it,” Tomar said. “We have very good experts in the fisheries department and we will take their help.” 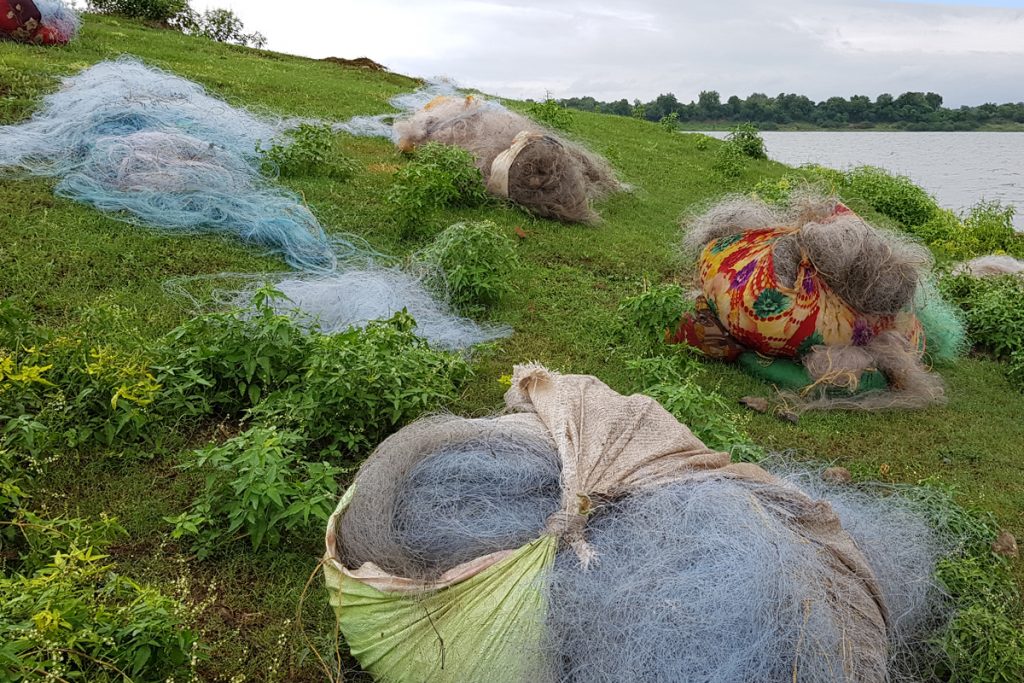 Sand mining in the Narmada River valley was banned by Madhya Pradesh High Court in May 2015, after a petition was filed by the Narmada Bachao Andolan (NBA), the non-profit that was at the forefront of the agitation against the Sardar Sarovar project. Later, in a separate order, the National Green Tribunal (NGT) banned illegal mining in Narmada in 2017. Nevertheless, illegal mining is rampant across the state, particularly in the Narmada valley.

Tomar admits that in Barwani district alone, 119 cases of illegal mining were registered between April 2018 and March 2019, and 90 cases have been registered since April this year.

Medha Patkar, eminent environmentalist and leader of the NBA, said the government has consistently ignored the destruction of river. “As all rivers are getting polluted in the country, we see an attack on riverine fishery. They are dumping mountains of mud in the Narmada,” said Patkar. “The government had promised a catchment area treatment program with Rs 2 crore (USD 287,000) for it, but nothing happened till now.” 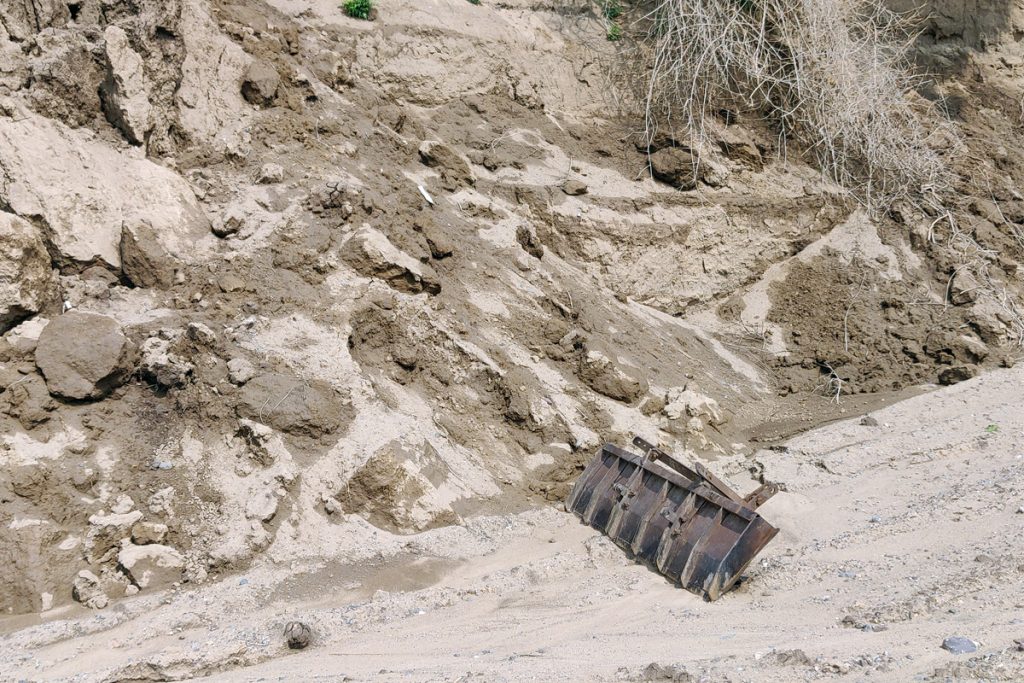 Dams and rampant mining of sand from the foreshore and riverbed of the Narmada have damaged the riverine ecology, affecting livelihoods of the communities living in the river valley. Photo: Rahul Yadav/Narmada Bachao Andolan

Amid the destruction of river by mining and damming, cooperative movements in the Narmada valley have kept hope alive for the beleaguered fishers. In 2017, 32 cooperative societies, comprising more than 1,000 fishers, were registered in four districts affected by the Sardar Sarovar Dam.

These cooperatives have proposed to form a federation. They hope to get fishing and management rights in the river and reservoirs of the Narmada, as fellow fishers around the Tawa and Bargi dams got nearly two decades ago after a spirited struggle.

“We are with the tribals and other communities. As they have rights over forests, they should also get rights of fishing,” said Sajjan Singh Varma, environment minister of Madhya Pradesh. “Anyone who fights for this, I will stand with him.”